THE WORLD'S MOST FAMOUS LINGUIST OFFERS A COMPLETELY ORIGINAL ANALYSIS OF THE WAY WE COMMUNICATE--AND A REVOLUTIONARY LANGUAGE TO LIVE BY!

In her #1 bestseller You Just Don't Understand, Deborah Tannen showed why talking to someone of the opposite sex can be like talking to someone from another world. Now Tannen is back with another groundbreaking book, this time widening her lens to examine the way we communicate in public--in the media, in politics, in our courtrooms, and classrooms--once again letting us see in a new way forces that have powerfully shaped our lives.

The war on drugs, the battle of the sexes, political turf combat--in the argument culture, war metaphors pervade our talk and influence our thinking. We approach anything we need to accomplish as a fight between two opposing sides. In this fascinating book, Tannen shows how deeply entrenched this cultural tendency is, the forms it takes, and how it affects us every day--sometimes in useful ways, but often causing damage.

The Argument Culture is a remarkable book that will change forever the way you perceive--and communicate with--the world.

An excerpt from The Argument Culture

1
FIGHTING FOR OUR LIVES

This is not another book about civility. “Civility” suggests a superficial, pinky-in-the-air veneer of politeness spread thin over human relations like a layer of marmalade over toast. This book is about a pervasive warlike atmosphere that makes us approach public dialogue, and just about anything we need to accomplish, as if it were a fight. It is a tendency in Western culture in general, and in the United States in particular, that has a long history and a deep, thick, and farranging root system. It has served us well in many ways but in recent years has become so exaggerated that it is getting in the way of solving our problems. Our spirits are corroded by living in an atmosphere of unrelenting contention—an argument culture.

The argument culture urges us to approach the world—and the people in it—in an adversarial frame of mind. It rests on the assumption that opposition is the best way to get anything done: The best way to discuss an idea is to set up a debate; the best way to cover news is to find spokespeople who express the most extreme, polarized views and present them as “both sides”; the best way to settle disputes is litigation that pits one party against the other; the best way to begin an essay is to attack someone; and the best way to show you’re really thinking is to criticize.

Our public interactions have become more and more like having an argument with a spouse. Conflict can’t be avoided in our public lives any more than we can avoid conflict with people we love. One of the great strengths of our society is that we can express these conflicts openly. But just as spouses have to learn ways of settling their differences without inflicting real damage on each other, so we, as a society, have to find constructive ways of resolving disputes and differences. Public discourse requires making an argument for a point of view, not having an argument—as in having a fight.

The war on drugs, the war on cancer, the battle of the sexes, politicians’ turf battles—in the argument culture, war metaphors pervade our talk and shape our thinking. Nearly everything is framed as a battle or game in which winning or losing is the main concern. These all have their uses and their place, but they are not the only way—and often not the best way—to understand and approach our world. Conflict and opposition are as necessary as cooperation and agreement, but the scale is off balance, with conflict and opposition overweighted. In this book, I show how deeply entrenched the argument culture is, the forms it takes, and how it affects us every day—sometimes in useful ways, but often creating more problems than it solves, causing rather than avoiding damage. As a sociolinguist, a social scientist, I am trained to observe and explain language and its role in human relations, and that is my biggest job here. But I will also point toward other ways for us to talk to each other and get things done in our public lives.

THE BATTLE OF THE SEXES

My interest in the topic of opposition in public discourse intensified in the years following the publication of You Just Don’t Understand, my book about communication between women and men. In the first year I appeared on many television and radio shows and was interviewed for many print articles in newspapers and magazines. For the most part, that coverage was extremely fair, and I was—and remain—indebted to the many journalists who found my ideas interesting enough to make them known to viewers, listeners, and readers. But from time to time—more often than I expected—I encountered producers who insisted on setting up a television show as a fight (either between the host and me or between another guest and me) and print journalists who made multiple phone calls to my colleagues, trying to find someone who would criticize my work. This got me thinking about what kind of information comes across on shows and in articles that take this approach, compared to those that approach topics in other ways.

At the same time, my experience of the academic world that had long been my intellectual home began to change. For the most part, other scholars, like most journalists, were welcoming and respectful in their responses to my work, even if they disagreed on specific points or had alternative views to suggest. But about a year after You Just Don’t Understand became a best-seller—the wheels of academia grind more slowly than those of the popular press—I began reading attacks on my work that completely misrepresented it. I had been in academia for over fifteen years by then, and had valued my interaction with other researchers as one of the greatest rewards of academic life. Why, I wondered, would someone represent me as having said things I had never said or as having failed to say things I had said?

The answer crystallized when I put the question to a writer who I felt had misrepresented my work: “Why do you need to make others wrong for you to be right?” Her response: “It’s an argument!” Aha, I thought, that explains it. When you’re having an argument with someone, your goal is not to listen and understand. Instead, you use every tactic you can think of—including distorting what your opponent just said—in order to win the argument.

Not only the level of attention You Just Don’t Understand received but, even more, the subject of women and men, triggered the tendency to polarize. This tendency to stage a fight on television or in print was posited on the conviction that opposition leads to truth. Sometimes it does. But the trouble is, sometimes it doesn’t. I was asked at the start of more than one talk show or print interview, “What is the most controversial thing about your book?” Opposition does not lead to truth when the most controversial thing is not the most important.

The conviction that opposition leads to truth can tempt not only members of the press but just about anyone seeking to attract an audience to frame discussions as a fight between irreconcilable opposites. Even the Smithsonian Institution, to celebrate its 150th anniversary, sponsored a series of talks billed as debates. They invited me to take part in one titled “The Battle of the Sexes.” The organizer preempted my objection: “I know you won’t be happy with this title, but we want to get people interested.” This is one of many assumptions I question in this book: Is it necessary to frame an interchange as a battle to get people interested? And even if doing so succeeds in capturing attention, does it risk dampening interest in the long run, as audiences weary of the din and begin to hunger for more substance?

Deborah Tannen is the acclaimed author of You Just Don’t Understand, which was on the New York Times bestseller list for nearly four years, the New York Times bestsellers You’re Wearing THAT? on mother-daughter communication and You Were Always Mom’s Favorite! about sisters, and many other books. A professor of linguistics at Georgetown University, Tannen appears frequently on national television and radio. She lives with her husband in the Washington, D.C., area. 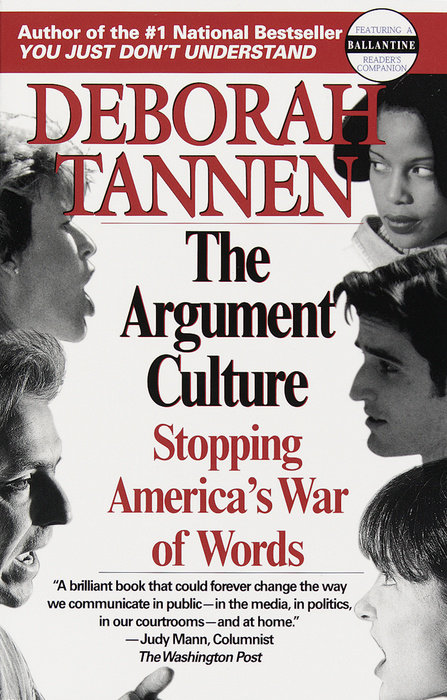