Here, for the first time, is the private and most intimate correspondence of one of America's most influential and incisive journalists--Hunter S. Thompson. In letters to a Who's Who of luminaries from Norman Mailer to Charles Kuralt, Tom Wolfe to Lyndon Johnson, William Styron to Joan Baez--not to mention his mother, the NRA, and a chain of newspaper editors--Thompson vividly catches the tenor of the times in 1960s America and channels it all through his own razor-sharp perspective. Passionate in their admiration, merciless in their scorn, and never anything less than fascinating, the dispatches of The Proud Highway offer an unprecedented and penetrating gaze into the evolution of the most outrageous raconteur/provocateur ever to assault a typewriter.

An excerpt from Proud Highway


LOUISVILLE IN THE FIFTIES … SLOE GIN, SLEAZY DEBUTANTES, AND THE GOOD LIFE IN CHEROKEE PARK … FROM ATHENAEUM HILL TO THE JEFFERSON COUNTY JAIL … WELCOME TO THE PROUD HIGHWAY …
So we shall let the reader answer this question for himself: Who is the happier man, he who has braved the storm of life and lived, or he who has stayed securely on shore and merely existed?
—Hunter S. Thompson, age seventeen

THIRD PRIZE ESSAY—NETTLEROTH CONTEST
“OPEN LETTER TO THE YOUTH OF OUR NATION”
BY HUNTER THOMPSON, 1955

Although the young Thompson was forever in trouble with the law, his Louisville Male High School English teacher Harold Tague deemed him “brilliant and unpredictable.” Thompson’s sardonic essays for the Athenaeum Literary Association’s bound yearbook, The Spectator, consistently poked fun at middle-class conformity.

The Athenaeum had been a respected literary society based at Male since June 1862—the month that Robert E. Lee took command of the Confederate army.

Young people of America, awake from your slumber of indolence and harken the call of the future! Do you realize that you are rapidly becoming a doomed generation? Do you realize that the fate of the world and of generations to come rests on your shoulders? Do you realize that at any time you may be called on to protect your country and the freedom of the world from the creeping scourge of Communism? How can you possibly laugh in the face of the disasters which face us from all sides? Oh ignorant youth, the world is not a joyous place. The time has come for you to dispense with the frivolous pleasures of childhood and get down to honest toil until you are sixty-five. Then and only then can you relax and collect your social security and live happily until the time of your death.

Also, your insolent attitude disturbs me greatly. You have the nerve to say that you have never known what it is like to live in a secure and peaceful world; you say that the present generation has balled things up to the extent that we now face a war so terrible that the very thought of it makes hardened veterans shudder; you say it is our fault that World War II was fought in vain; you say that it is impossible to lay any plans for the future until you are sure you have a future. I say Nonsense! None of these things matter. If you expect a future you must carve it out in the face of these things. You also say that you must wait until after you have served your time with the service to settle down. Ridiculous! It is a man’s duty to pull up stakes and serve his country at any time, then settle down again.

I warn you, if you don’t start now it will be too late, and the blame for the end of the world will be laid at your feet. Heed my warning, oh depraved and profligate youth; I say awake, awake, awake!

THE SPECTATOR
“SECURITY”
BY HUNTER THOMPSON, 1955

Watching Marlon Brando in The Wild One inspired Thompson to become a “Louisville outlaw” with no use for anyone who chose security over adventure.

Security … what does this word mean in relation to life as we know it today? For the most part, it means safety and freedom from worry. It is said to be the end that all men strive for; but is security a utopian goal or is it another word for rut?

Let us visualize the secure man; and by this term, I mean a man who has settled for financial and personal security for his goal in life. In general, he is a man who has pushed ambition and initiative aside and settled down, so to speak, in a boring, but safe and comfortable rut for the rest of his life. His future is but an extension of his present, and he accepts it as such with a complacent shrug of his shoulders. His ideas and ideals are those of society in general and he is accepted as a respectable, but average and prosaic man. But is he a man? Has he any self-respect or pride in himself? How could he, when he has risked nothing and gained nothing? What does he think when he sees his youthful dreams of adventure, accomplishment, travel and romance buried under the cloak of conformity? How does he feel when he realizes that he has barely tasted the meal of life; when he sees the prison he has made for himself in pursuit of the almighty dollar? If he thinks this is all well and good, fine, but think of the tragedy of a man who has sacrificed his freedom on the altar of security, and wishes he could turn back the hands of time. A man is to be pitied who lacked the courage to accept the challenge of freedom and depart from the cushion of security and see life as it is instead of living it second-hand. Life has by-passed this man and he has watched from a secure place, afraid to seek anything better. What has he done except to sit and wait for the tomorrow which never comes?

Turn back the pages of history and see the men who have shaped the destiny of the world. Security was never theirs, but they lived rather than existed. Where would the world be if all men had sought security and not taken risks or gambled with their lives on the chance that, if they won, life would be different and richer? It is from the bystanders (who are in the vast majority) that we receive the propaganda that life is not worth living, that life is drudgery, that the ambitions of youth must be laid aside for a life which is but a painful wait for death. These are the ones who squeeze what excitement they can from life out of the imaginations and experiences of others through books and movies. These are the insignificant and forgotten men who preach conformity because it is all they know. These are the men who dream at night of what could have been, but who wake at dawn to take their places at the now-familiar rut and to merely exist through another day. For them, the romance of life is long dead and they are forced to go through the years on a tread-mill, cursing their existence, yet afraid to die because of the unknown which faces them after death. They lacked the only true courage: the kind which enables men to face the unknown regardless of the consequences.

As an afterthought, it seems hardly proper to write of life without once mentioning happiness; so we shall let the reader answer this question for himself: who is the happier man, he who has braved the storm of life and lived or he who has stayed securely on shore and merely existed?

Although he excelled academically at Louisville Male High School, one month after writing this poem the seventeen-year-old Thompson found himself convicted of robbery and sentenced to six weeks in the Jefferson County jail. On graduation day, when his classmates received diplomas, Thompson sat alone in his cell.

I could see the moon hung high in the sky and the mocking grin on his face.

I know he was looking straight at me, perched high in my lonely place.

His voice floated down through the crisp night air and I thought I heard him say,

“It’s too bad my boy, It’s an awful shame that you have to go this way.”

This chilled my heart and I shuddered with fear, for I knew he was right as right could be.

It was then that my skin began to crawl and I thought, “What I’d give to be free!”

Her face came back to me then like a flash, I remembered the touch of her lips.

I remembered the beautiful gold of her hair, her sky-blue eyes and the touch of her finger-tips.

Then I cursed myself and tore my hair for I knew I’d been wrong from the start.

I’d thrown away every chance I’d had and finally broken her heart.

My grief was of that special kind that only comes to men when they reach the end of a lonesome road and see what they could have been.

I cried as I thought of the people outside who were happy, and honest, and free.

And I knew that not even the lowest one would care to trade places with me.

Cold sweat broke out on my forehead now and my scalp felt tight and drawn.

What could I do to escape my fate, the electric chair at dawn?

I seized the bars, and shrieked, and wailed, like a soul who is lost in hell.

But the only voice that answered me was the mid-night toll of a bell.

Hunter S. Thompson was born in Louisville, Kentucky, in 1937 and died in Colorado in 2005. He contributed regularly to a wide variety of publications but is probably best known for his work as national-affairs correspondent for Rolling Stone, in which Fear and Loathing in Las Vegas and Fear and Loathing: On the Campaign Trail ’72 originally appeared. He originated “gonzo journalism,” in which the reporter is a part of the story. Fear and Loathing in Las Vegas was made into a major motion picture, directed by Terry Gilliam and starring Johnny Depp. 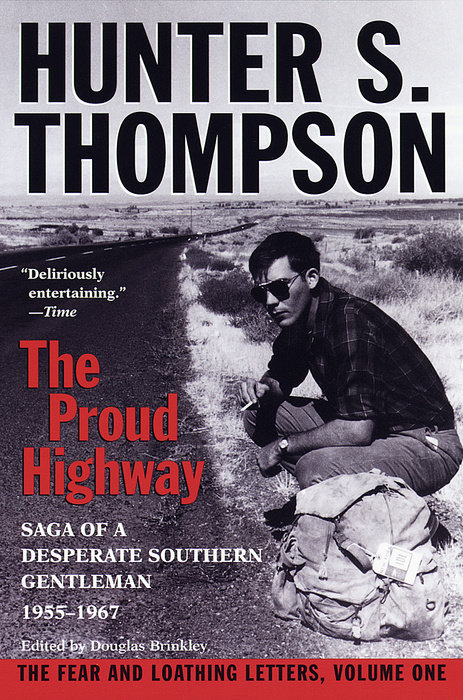