#1 NEW YORK TIMES BESTSELLER • In this essential Star Wars Legends novel—the first ever to take place after the events of the original trilogy—Grand Admiral Thrawn makes his debut on the galactic stage.

Five years ago, the Rebel Alliance destroyed the Death Star, defeated Darth Vader and the Emperor, and drove the remnants of the old Imperial Starfleet to a distant corner of the galaxy. Princess Leia and Han Solo are married and expecting twins. And Luke Skywalker has become the first in a long-awaited line of Jedi Knights.

But thousands of light-years away, the last of the Emperor’s warlords, Grand Admiral Thrawn, has taken command of the shattered Imperial fleet, readied it for war, and pointed it at the fragile heart of the New Republic. For this dark warrior has made a vital discovery that could destroy everything the courageous men and women of the Rebel Alliance fought so hard to build.

An excerpt from Heir to the Empire: Star Wars Legends (The Thrawn Trilogy)

“Captain Pellaeon?” a voice called down the portside crew pit through the hum of background conversation. “Message from the sentry line: the scoutships have just come out of lightspeed.”

Pellaeon, leaning over the shoulder of the man at the Chimaera’s bridge engineering monitor, ignored the shout. “Trace this line for me,” he ordered, tapping a light pen at the schematic on the display.

“I heard him,” Pellaeon said. “You have an order, Lieutenant.”

“Yes, sir,” the other said carefully, and keyed for the trace.

“Captain Pellaeon?” the voice repeated, closer this time. Keeping his eyes on the engineering display, Pellaeon waited until he could hear the sound of the approaching footsteps. Then, with all the regal weight that fifty years spent in the Imperial Fleet gave to a man, he straightened up and turned.

The young duty officer’s brisk walk faltered; came to an abrupt halt. “Uh, sir—” He looked into Pellaeon’s eyes and his voice faded away.

Pellaeon let the silence hang in the air for a handful of heartbeats, long enough for those nearest to notice. “This is not a cattle market in Shaum Hii, Lieutenant Tschel,” he said at last, keeping his voice calm but icy cold. “This is the bridge of an Imperial Star Destroyer. Routine information is not—repeat, not—simply shouted in the general direction of its intended recipient. Is that clear?”

Pellaeon held his eyes a few seconds longer, then lowered his head in a slight nod. “Now. Report.”

“Yes, sir.” Tschel swallowed again. “We’ve just received word from the sentry ships, sir: the scouts have returned from their scan raid on the Obroa-skai system.”

“Very good,” Pellaeon nodded. “Did they have any trouble?”

“Only a little, sir—the natives apparently took exception to them pulling a dump of their central library system. The wing commander said there was some attempt at pursuit, but that he lost them.”

“I hope so,” Pellaeon said grimly. Obroa-skai held a strategic position in the borderland regions, and intelligence reports indicated that the New Republic was making a strong bid for its membership and support. If they’d had armed emissary ships there at the time of the raid. . . .

Well, he’d know soon enough. “Have the wing commander report to the bridge ready room with his report as soon as the ships are aboard,” he told Tschel. “And have the sentry line go to yellow alert. Dismissed.”

“Yes, sir.” Spinning around with a reasonably good imitation of a proper military turn, the lieutenant headed back toward the communications console.

The young lieutenant . . . which was, Pellaeon thought with a trace of old bitterness, where the problem really lay. In the old days—at the height of the Empire’s power—it would have been inconceivable for a man as young as Tschel to serve as a bridge officer aboard a ship like the Chimaera. Now—

He looked down at the equally young man at the engineering monitor. Now, in contrast, the Chimaera had virtually no one aboard except young men and women.

Slowly, Pellaeon let his eyes sweep across the bridge, feeling the echoes of old anger and hatred twist through his stomach. There had been many commanders in the Fleet, he knew, who had seen the Emperor’s original Death Star as a blatant attempt to bring the Empire’s vast military power more tightly under his direct control, just as he’d already done with the Empire’s political power. The fact that he’d ignored the battle station’s proven vulnerability and gone ahead with a second Death Star had merely reinforced that suspicion. There would have been few in the Fleet’s upper echelons who would have genuinely mourned its loss . . . if it hadn’t, in its death throes, taken the Super Star Destroyer Executor with it.

Even after five years Pellaeon couldn’t help but wince at the memory of that image: the Executor, out of control, colliding with the unfinished Death Star and then disintegrating completely in the battle station’s massive explosion. The loss of the ship itself had been bad enough; but the fact that it was the Executor had made it far worse. That particular Super Star Destroyer had been Darth Vader’s personal ship, and despite the Dark Lord’s legendary—and often lethal—capriciousness, serving aboard it had long been perceived as the quick line to promotion.

Which meant that when the Executor died, so also did a disproportionate fraction of the best young and midlevel officers and crewers.

The Fleet had never recovered from that fiasco. With the Executor’s leadership gone, the battle had quickly turned into a confused rout, with several other Star Destroyers being lost before the order to withdraw had finally been given. Pellaeon himself, taking command when the Chimaera’s former captain was killed, had done what he could to hold things together; but despite his best efforts, they had never regained the initiative against the Rebels. Instead, they had been steadily pushed back . . . until they were here.

Here, in what had once been the backwater of the Empire, with barely a quarter of its former systems still under nominal Imperial control. Here, aboard a Star Destroyer manned almost entirely by painstakingly trained but badly inexperienced young people, many of them conscripted from their home worlds by force or threat of force.

Here, under the command of possibly the greatest military mind the Empire had ever seen.

Pellaeon smiled—a tight, wolfish smile—as he again looked around his bridge. No, the end of the Empire was not yet. As the arrogantly self-proclaimed New Republic would soon discover.

He glanced at his chron. Two-fifteen. Grand Admiral Thrawn would be meditating in his command room now . . . and if Imperial procedure frowned on shouting across the bridge, it frowned even harder on interrupting a Grand Admiral’s meditation by intercom. One spoke to him in person, or one did not speak to him at all. “Continue tracing those lines,” Pellaeon ordered the engineering lieutenant as he headed for the door. “I’ll be back shortly.”

The Grand Admiral’s new command room was two levels below the bridge, in a space that had once housed the former commander’s luxury entertainment suite. When Pellaeon had found Thrawn—or rather, when the Grand Admiral had found him—one of his first acts had been to take over the suite and convert it into what was essentially a secondary bridge.

A secondary bridge, meditation room . . . and perhaps more. It was no secret aboard the Chimaera that since the recent refitting had been completed the Grand Admiral had been spending a great deal of his time here. What was secret was what exactly he did during those long hours.

Stepping to the door, Pellaeon straightened his tunic and braced himself. Perhaps he was about to find out. “Captain Pellaeon to see Grand Admiral Thrawn,” he announced. “I have informa—”

The door slid open before he’d finished speaking. Mentally preparing himself, Pellaeon stepped into the dimly lit entry room. He glanced around, saw nothing of interest, and started for the door to the main chamber, five paces ahead.

A touch of air on the back of his neck was his only warning. “Captain Pellaeon,” a deep, gravelly, catlike voice mewed into his ear.

Pellaeon jumped and spun around, cursing both himself and the short, wiry creature standing less than half a meter away. “Blast it, Rukh,” he snarled. “What do you think you’re doing?”

For a long moment Rukh just looked up at him, and Pellaeon felt a drop of sweat trickle down his back. With his large dark eyes, protruding jaw, and glistening needle teeth, Rukh was even more of a nightmare in the dimness than he was in normal lighting.

Especially to someone like Pellaeon, who knew what Thrawn used Rukh and his fellow Noghri for.

“I’m doing my job,” Rukh said at last. He stretched his thin arm almost casually out toward the inner door, and Pellaeon caught just a glimpse of the slender assassin’s knife before it vanished somehow into the Noghri’s sleeve. His hand closed, then opened again, steel-wire muscles moving visibly beneath his dark gray skin. “You may enter.”

“Thank you,” Pellaeon growled. Straightening his tunic again, he turned back to the door. It opened at his approach, and he stepped through—

Into a softly lit art museum.

He stopped short, just inside the room, and looked around in astonishment. The walls and domed ceiling were covered with flat paintings and planics, a few of them vaguely human-looking but most of distinctly alien origin. Various sculptures were scattered around, some freestanding, others on pedestals. In the center of the room was a double circle of repeater displays, the outer ring slightly higher than the inner ring. Both sets of displays, at least from what little Pellaeon could see, also seemed to be devoted to pictures of artwork.

And in the center of the double circle, seated in a duplicate of the Admiral’s Chair on the bridge, was Grand Admiral Thrawn. 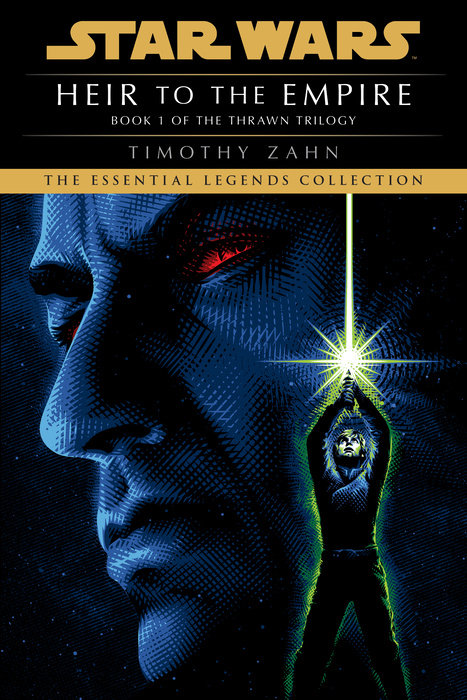