From the New York Times bestselling author of A Deadly Education comes the seventh volume of the Temeraire series, as the Napoleonic Wars bring Will Laurence and Temeraire to South America.

The French have invaded Spain, forged an alliance with Africa’s powerful Tswana empire, and brought revolution to Brazil. Captain Will Laurence and his indefatigable fighting dragon, Temeraire, must travel to South America to negotiate with the Incas, who are also being wooed by the French.

If they fail, Napoleon may conquer yet another continent in his campaign for world domination, and the tide of the war may prove impossible to stop.

An excerpt from Crucible of Gold

I am afraid his attention is much given to material things,” Shen Li observed in a mild way, while Temeraire strove in the distance lifting up the great carved-out slab of stone which should form the central part of the floor of the pavilion: a curious opinion to hear from a dragon, who were nearly all of them inclined to extreme attachment to material things; but perhaps her long stretches in the air, over the barren distances of the Australian deserts and the southern Pacific, had inclined the great-winged Chinese courier to adopt a philosophy more suited to her lot.

“It is of course an admirable work,” she added, “but such attachments inevitably must lead to suffering.”

Laurence answered her with only a small part of his attention: Temeraire had managed to get the slab aloft, and Laurence now waved the team of men forward to raise the skids which should guide it into its final resting place; but even this immediate work did not hold his thoughts. Those were bent upon the low hut some ten yards distant, under a stand of trees and the coolest place in their ragged encampment, where Hammond lay recovering: and with him all the world, come back to knock at Laurence’s threshold when he had thought it done with.

The slab swayed uncertainly in mid-air, then steadied as it reached the long wooden braces; Temeraire sighed out his breath and lowered slowly away, and the stone scraped bark and shreds of wood down onto the workers as the slab eased gently down and settled in, the men backing away with their staves as it slid.

“Well, and a miracle it is no-one was crushed, or lost a hand,” Mr. O’Dea said with something of an air of disappointment, as he paid off the men with their tots of rum and a few coins of silver; he had made a great many predictions of disaster over Temeraire’s obstinate determination to have the single enormous slab of beautifully marbled stone preserved at the heart of his pavilion.

“It would have been quite criminal to cut it up smaller,” Temeraire said, “and spoil the pattern; not that I do not admire mosaics very much, particularly if they are made of gems, but this is quite out of the common way, even though some might say it is just ordinary rock.”

He had finished inspecting all the supports, sniffing at the fresh mortar anxiously, and now sank down with some relief beside Laurence and Shen Li for a drink of water from the flowing stream. “Do you not agree?”

“It is very handsome,” Shen Li said, “although I can see no evil in admiring it in the valley where it was formed.”

“I do not mean to be rude, Laurence,” Temeraire said quietly aside, when she had turned her attention elsewhere, “but Shen Li can be rather dampening to one’s spirits; although I must be grateful to her for being so obliging as to come and bring us letters and visitors: how kind of Mr. Hammond to travel so long a way to see us.”

“Yes, “Laurence said soberly, as he undid the wrappings on the mail: a large and heavy scroll wrapped on rollers of jade, for Temeraire from his mother, Qian, which accompanied a book of poetry; and a thick sealed packet which Laurence turned over several times and at last had to remove the outer layer of covering to find it addressed to Gong Su with no more direction than his name.

“Thank you, Captain,” Gong Su said, and taking it went into his own small lean-to; shortly Laurence could see him performing the Chinese ritual of obeisance to it, and supposed it must be a communication from his father.

There was also, more incongruously, a heavily crossed note for a Mr. Richard Shipley:“Can this be for you, Mr. Shipley?” Laurence asked, doubtfully, wondering how a former convict should have come by a correspondent in China.

“Aye, sir, “the young man said, taking it, “my brother’s in the Willow-Tree as runs the Canton route, and much obliged to you.”

Shen Li had brought also a small mailbag to be passed along to Sydney, but these were all the letters directed to the members of their own small company of laborers. Laurence closed up the bag: O’Dea would take it to Port Jackson tomorrow, and perhaps Hammond would go along with it. His business might well be there, with Captain Rankin, who after all was the senior officer of the Corps in this country.

Laurence could not persuade himself to believe it, however. While the cows roasted on spits, for the dragons’ dinner, he walked out over the newly laid floor of the pavilion to its edge and looked down upon the broad valley, already sprouting with the first seed crops, and the browsing herd of sheep and cattle lowing soft to one another in the late afternoon. The war was only a distant storm passing on the other side of the mountains, a faint, far-away noise; here there was peace, and honest labor, without the clinging stink of murder and treachery which seemed to have by slow octopoid measures attached itself to his life. Laurence had found himself content to forget the world, and to be forgotten by it.

“Thank you, I will,” he heard Hammond saying, and turned: Hammond had at last emerged from the hut and was by the fireside accepting a glass of rum from Mr. O’Dea and sinking into an offered camp-chair. Laurence rubbed a hand over his jaw, over the hard prickle of the beard, grown familiar. No: Hammond had not come from Peking to bring a few letters and some conversation.

“Pray allow me to renew my gratitude,” Hammond said, struggling back to his feet, when Laurence had joined him. “I have slept all the day!—and I am astonished to see you so far advanced.” He nodded towards the pavilion.

“Yes, indeed,” Temeraire said, swinging his head around at the compliment, “everything is coming along splendidly, and we have thought up several small improvements to the ordinary design. You must walk through it; when you are feeling more the thing, of course: you cannot have had a comfortable journey.”

“No,” Hammond said, very decidedly, “—but I ought not be complaining; Laurence, will you think of it, three weeks!—this time three Sundays ago I was taking tea in Peking; it is scarcely to be believed. Although I am not certain I have survived the experience; yes, thank you, I will take another.”

Hammond was not a bulky man, and not given much to drink; three tots of strong unwatered rum worked upon his caution, or perhaps he would not have spoken so readily when Laurence said, “Sir, while your company must always be welcome, I must confess myself at a loss to answer for your presence here; you cannot have made such a journey for some trivial purpose.”

“Oh!” Hammond said, and looking round in vain for a table at last set down his glass upon the ground, and straightened up beaming, “but I must tell you at once: I am here to restore you to the list, Captain; you are reinstated, and—” Laurence was staring, while Hammond turned to rummaging in the inner pockets of his coat. “I even have them here, with me,” and brought out the two narrow gold bars which marked a captain of the Aerial Corps.

Laurence held himself very still a moment, against the involuntary betraying jerk of movement which nearly escaped: if the bars had not been lying across Hammond’s palm Laurence would have imagined it a sort of wretched joke, a twist of the mind inspired by exhaustion and liquor, but so much premeditation made it true: true, and no less absurd for that. He was a traitor. If he had done anything of note in the invasion of Britain to merit a lessening of the natural penalty for his crime, he had already been granted the clemency of transportation instead of hanging for services rendered, and since had done nothing which should merit the favorable attention of Whitehall: had indeed refused the orders of a Navy officer point-blank.

“Oh! Oh, Mr. Hammond, how could you not say so at once? But I must not reproach you, when you have brought such splendid news,” Temeraire was saying, head bent low and turned so that one enormous eye could survey the bars. “Laurence, you must have your green coat, at once; Mr. Shipley! Mr. Shipley, pray fetch Laurence’s chest here—”

“No, “Laurence said, “—no, I thank you. Sir,” he said to Hammond, with more courtesy than he could feel under the circumstances, “I am very sensible of the kindness you mean to do me by coming all this way with the news, but I must decline.”

He had said it: the only possible answer he could make, and bitter to give. The bars still hung upon Hammond’s palm before him: small and unadorned to represent as they did the lifting of a blot upon his name and his family, whose shame he had with so much effort learned not to think of, as he could do nothing to repair it.

Hammond stared, his hand still outstretched, and Temeraire said, “But Laurence, surely you cannot mean it,” looking at the gold bars.

“There can be only one purpose for ordering my reinstatement in such a manner, in our present circumstances,” Laurence said flatly, “and that is to charge me with oversetting the rebellion here in Sydney: no. I am sorry, sir, but I will not be the Government’s butcher again. I have no great sympathy for Mr. MacArthur and his grab for independence, but he has not acted without cause or without sense, and I will not slaughter British soldiers to march him to a scaffold.” 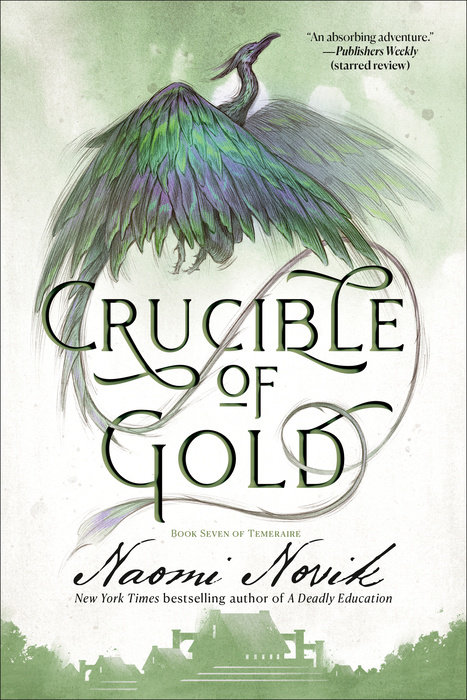