From the New York Times bestselling author of A Deadly Education comes the eighth and penultimate volume of the Temeraire series, in which Will Laurence finds himself shipwrecked in Japan with no memory of his dragon, Temeraire, or his past.

“A first-class entry in a remarkable and appealing series.” —Kirkus Reviews (starred review)

This alternate version of the Napoleonic War—with dragons!—ramps up as the eighth and penultimate Temeraire novel takes us to Japan, where a shattered Captain Laurence is washed up on the shores remembering nothing of his past save as the captain of the navy ship Reliant. He struggles to remember why he is in Japan and why he has a startling knowledge of the Chinese language. He has no memory whatever of his dragon, Temeraire—which distresses Temeraire greatly when they are finally reunited. But so great is their bond that the two once again find themselves at the forefront of the war against Napoleon . . . just when all looks most hopeless.

An excerpt from Blood of Tyrants

Water lapping salt at his cheek roused him, a fresh cold trickle finding its way into the hollow of sand where his face rested. It spurred him: with an effort he pushed to hands and knees and then up, to stagger indecorously along the shore and fall again at the foot of several gnarled old pines clinging to the edge of the beach.

His mouth was dry and cracked, his tongue swollen. His hands were clotted with sand. The wind bit sharply through the sodden wool of his coat, stained black with water, and he was barefoot. Slowly, he unfastened the remnants of a leather harness from around his waist: buckles and clasps of good steel, still bright, but heavily waterlogged; he let it fall to the sand. The sword-belt he kept. The blade when he drew it was bright Damascus steel, the hilt wrapped in black ray-skin, the collar the golden head of a dragon. He stared down at it, without recognition.

He rested it across his knees and leaned back against the tree, half-drifting. The empty ocean stood before him: water cold dark blue, the sky a thin grey; dark clouds receded into the east. He might have emerged onto the sand new-born. He felt as empty as the shore: of strength, of history, of name.

Thirst at last drove him onwards, when little else would have served to rouse him. The stand of trees gave onto a road, well-maintained and showing the signs of heavy use, recent tracks and disturbed dust. He walked slowly and mechanically until he found a narrow stream that crossed the road, traveling towards the sea, and he stopped and cupped water into his mouth urgently until the taste of salt had gone.

He held himself braced on hands and knees, water dripping from his face into the stream. The bank had a little new grass, though the ground was still cold. There was a smell in the air of pine-needles, and the stream ran over the rocks in a steady gurgle, mingling with the more distant sound of the ocean, the scent of salt on the wind. He felt inwardly the sense of something urgent and forgotten like a weight on his back. But his trembling arms slowly gave way. He lay down on the grass of the riverbank where he had knelt to drink and fell again into a heavy torpor; his head ached dully.

The sun climbed, warmed his coat. Travelers went past on the nearby road. He was distantly aware of the jingle of harness and slap of walking feet, the occasional creak of cart wheels, but none of them stopped to bother him or even halted by the stream. A small party of men went by singing off-key, loudly and cheerfully, not in any tongue he knew. At last a larger company came, accompanied by the familiar creaking of an old-fashioned sedan-chair. Some confused corner of his mind offered the image of an older woman, borne by porters through London streets, but even as it came he knew it wrong.

The creaking stopped abruptly; a voice spoke from the chair: a clear tenor with the directness of authority. Prudence would have driven him to his feet, but he had no reserves of strength. In a moment, someone came to inspect him—a servant of some kind? He had some vague impression of a youth bending down over him, but not so low that the face came clear.

The servant paused, and then withdrew quickly to his master and spoke urgently in a clear young voice. There was another pause, and then the master spoke again in yet another tongue, one which he could not put a name to and nevertheless somehow understood: a rising and falling speech, musical. “I will not evade the will of Heaven. Tell me.”

“He is Dutch,” the servant answered in that same language, reluctance clear in every word.

He might have raised his head to speak—he was not Dutch, and knew that, if very little else; but he was cold, and his limbs heavier with every moment.

He heard orders given in the unfamiliar language while darkness stole over his vision; there were hands on him, their warmth welcome. He was lifted from the ground and slung into a sheet or a net for carrying; he could not even open his eyes to see. The company moved on; suspended in mid-air, swinging steadily back and forth as they went on, he felt almost as though he were in a hammock, aboard ship, swaying with the water. The movement lulled him; his pain dulled; he knew nothing more.

“William Laurence,” he said, and woke with his own name, at least, restored to him: out of a tangled dream full of burning sails and a strange weight of despair, a sinking ship. It faded as he struggled up to sit. He had been lain on a thin pad laid upon a floor of woven straw matting, in a room like none he had ever seen before: one solid wooden wall, the rest of translucent white paper set in frames of wood, and no sign of doors or windows. He had been bathed and dressed in a robe of light cotton; his own clothes were gone, and his sword. He missed the latter more.

He felt adrift, robbed of place and time. The chamber might have been a solitary hut or a room in the center of a great house; it might be set upon a mountaintop or the seashore; he might have slept an hour, a day, a week. A shadow abruptly loomed on the other side of the wall furthest from his bed, and the wall slid open along a track to furnish Laurence a glimpse of a corridor and another room across standing half-open, indistinguishable from his own, save for a window which looked out on a slim cherry-tree with bare dark branches.

A young man, not very tall but gangly with recent growth, perhaps sixteen, came through the opening and folded himself into the low-roofed chamber while Laurence stared at him blankly: he was Oriental. A long face with a sharp chin, clean-shaven and softened with the last remnants of puppy-fat; his dark hair was drawn back into a tail, and he wore an intricately arranged set of robes, creases as sharp as knife-edges.

He sat down on his heels and contemplated Laurence in turn, with an expression bleak enough to be aimed at a plague-carrier. After a moment he spoke, and Laurence thought he recognized the voice—the youth who had wished him left by the road.

“I have not the least notion what you are saying,” Laurence said, his voice sounding hoarse in his own ears. He cleared his throat: even that much struck his head with fresh pain. “Can you speak English? Or French? Where am I?” He tried those tongues both, and then hesitating repeated the last over in the other language which the men had spoken on the road.

“You are in Chikuzen Province,” the young man said, answering him in kind, “and far from Nagasaki, as you must well know.”

There was a sharp bitterness to his voice, but Laurence seized on the one familiar name. “Nagasaki?” he said, half in relief, but the momentary gratification faded: he was no less bewildered to know himself in Japan, the other side of the world from where he ought have been.

The young man—too old for a page, and he wore a sword; an equerry of some sort, or a squire, Laurence could only guess—made no answer, only with a curt gesture motioned him off the mat.

Laurence shifted himself onto the floor, with some awkwardness and pain: the ceiling was too low to have permitted him to stand unless he had hunched over like a toad, and he ached in every part. Two servants came in at the young man’s call; they tidied the mat away into a cabinet and offered Laurence fresh garments, baffling in their layers. He felt a clumsy child under their valeting, thrust one way and then another as he put his limbs continuously in the wrong places; then they brought him a tray of food: rice and dried fish and pungent broth, with an array of startling pickles. It was by no means the breakfast he would have chosen, his stomach unsettled, but they had no sooner put it before him than animal hunger became his master. He paused only after having devoured nearly half the meal, and stared at the eating-sticks, which he had picked up and used without thinking of it.

He forced himself to go on more slowly than he wished, still queasy and conscious of being under observation, the young man regarding him coldly and steadily the whole of his meal. “Thank you,” Laurence said at last, when he had finished, and the dishes were silently and deftly removed. “I would be grateful if you should give your master my thanks for his hospitality, and tell him I would be glad of an opportunity to repay it.”

The youth only compressed his lips together. “This way,” he said shortly. Laurence supposed he could have not looked anything but a vagabond, when they had found him.

The corridors of the house were not so stooped as the chambers. Laurence followed him to a back-chamber with a low writing-desk of some sort set upon the floor: another man sat behind it, working smoothly with brush and ink. His forehead and pate were clean-shaven, with a queue of his back hair clubbed tight and bound down doubled, over the bare skin; his garments were more ornate than the young man’s, although of the same style. The young man bowed to him from the waist, and spoke briefly in the Japanese tongue, gesturing towards him.

“Junichiro tells me you are recovered, Dutchman,” the man said, laying aside his brush. He looked across the desk at Laurence, wearing an expression of formal reserve, but with none of the dismay the young man—Junichiro?—had aimed at him. 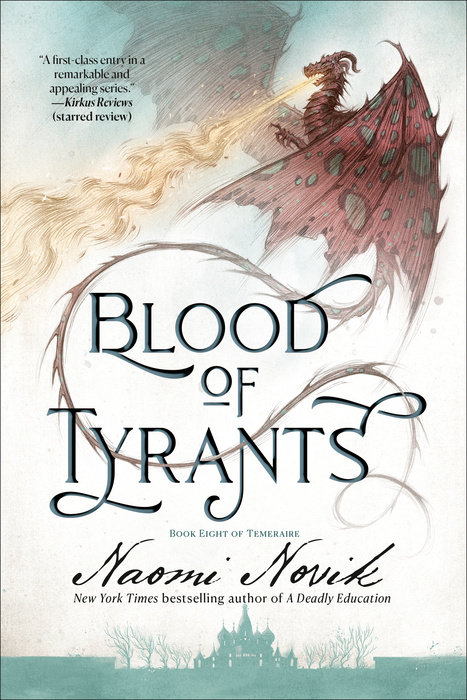