Carlton Chomp, the notorious right-wing business tycoon and television personality, shocked the world by becoming the president—and then shocked it again by resigning after only two years in office. After months in exile, the ex-president is returning to public life by headlining a cruise to a private island in the Bahamas. Travel writer Jacob Smalls is assigned to review the cruise. He brings along an undercover ally: his mother. Together they plan to investigate the ultimate in political mysteries. Why did Chomp resign? And why is he making a comeback?

On the day of the cruise, the departure city is enflamed with massive protests, counter-protests, and violence on both sides. When one of the ship’s passengers is found dead that evening, Jacob is faced with an even more urgent question: Was Chomp himself behind the murder, or was it one of his desperate political enemies? The search for the truth will take Jacob and his mother off the ship and into the dangerous tropical landscape of the cruiseline’s private island, where Chomp and his supporters will finally reveal what they’ve been planning all along.

Praise for The Travel Writer

“Travel doesn’t just broaden the mind; it can also get you killed. Sassy, cynical Jacob Smalls is an ideal guide for journeying into unknown territories.”—Christopher Fowler, author of the Peculiar Crimes Unit Mystery series

An excerpt from The Ex-President

Presidential candidate Carlton Chomp loved foreigners. He loved their food, architecture, and women. He loved ripping them off in business deals. But he wanted them out of his country. He scoffed at those who called for a wall across the Mexican border. Walls were for losers, he said. America should be defended by men with guns. At his rallies, he loved to point out that our country had thousands of virile young men stationed in peaceful allied countries like Germany, South Korea, and Japan, where they passed their time waxing their Humvees, playing Xbox, and wasting their virility on foreign women. Why not, he asked, have them spend their pay at American bars, GameStops, and strip joints? Chomp wanted them stationed at the Mexican border, on ships in the Gulf and off the east and west coasts, even at Canadian border crossings. In their spare time, they could venture into America’s interior to conduct deportation raids on factories, corner groceries, and ethnic restaurants. Critics pointed out that this was both infeasible and unconstitutional. Candidate Chomp didn’t care. His favorite rhetorical device was outrageousness.

Most of America voted for his opponent. He won anyway.

The first eighteen months of his presidency were largely uneventful, but around two years in, just after the midterm elections, Chomp began to cut loose. Agents in a new division of Immigration and Customs Enforcement were given distinctive red baseball caps and GoPro video cameras. Live-streaming the raids seemed to inspire them to action-hero levels of high-handedness and violence. Some of the undocumented began surrendering even before the raids were launched; others simply lived in deeper fear than ever before. Congress was submissive. Protests were massive, constant, and ineffective. Chomp’s supporters—known as Chompians—were ecstatic. In one of his frequent tweets, Chomp had promised to make America hard again, embracing the double entendre, and who could doubt his success? People are as potent as they feel, and the Chompians felt great. That Chomp also, in his own spare time, managed to eliminate several public healthcare programs, corporate taxes, the Environmental Protection Agency, and the Congressional Budget Office, seemed almost beside the point.

There was only one problem. The presidency apparently failed to agree with President Chomp. On the Ides of March, two years and two months after he took the oath of office, Chomp, by tweet, announced his impending resignation. Left activists declared that the president had finally had enough of being protested in the streets and laughed at on late-night television. Administration officials claimed, off the record, that those were the only things that had kept him in office that long. Gossip sites blamed the decision on the first lady, who openly longed to trade such traditional first-lady duties as reading picture books in podunk public schools for pastimes more suited to her supermodel-emerita lifestyle, such as presiding over fashion shows in Manhattan and popping in at acro-yoga classes in St. Barts. Rumors of the couple’s separation were only halfheartedly denied.

Chomp’s own explanation was different. His resignation speech, like all his speeches, was self- pitying, vainglorious, pugnacious, scornful, and somehow, especially to his fans, heroic. He explained that governing had become boring. Half of what he had wanted to accomplish he had done on election night itself. The true goal of politics, he declared, is not policy, but victory. The media professed to be shocked, but the Chompians were sympathetic. They understood that shaking your fist in the bloody face of the defeated was more satisfying than, say, rallying congressional votes to eliminate federal mining regulations or Medicaid.

Chomp’s last day in office was June 20—the last day of spring. The reins of power passed to his vice president, a party stalwart who’d been selected solely for his statesmanlike demeanor and obeisance to Chomp. Unhitched from his old master, President Farthing proceeded to govern exactly as his new masters, the party elders, wanted him to. As a sop to the new spirit of bipartisanship, deportation raids were (mostly) relaxed. On the other hand, public health spending was slashed even further, and the top tax bracket was eliminated entirely. But at least, liberals reminded the nation, allegedly undocumented immigrants were no longer getting clubbed live on C-SPAN. Massive victory marches took over the photogenic centers of Chomp-hating cities throughout the nation. Chomp’s wife divorced him anyway.

Political pundits expected Chomp to slink off to one of his estates in the Mountain West and enjoy a life of revenge-dating supermodels and dominating Fox News panels. This he did—but only for about six months. Then with some fanfare—Chomp adored fanfare—he began to hold rallies again. No one understood what their purpose was. Clearly he loved rallies, and clearly he loved pissing off those television opinion scolds who felt that a failed politician should fade decorously into oblivion. Chompians packed the arenas as eagerly as they had before the election. His fans seemed in on a secret kept hidden from the rest of America. They went wild as Chomp railed against the do-nothing monkeys in Congress, President Farthing, and the emboldened immigrant hordes that were now, he claimed, pouring back into the country. The Chompians’ signs urged Chomp to run again. Winning after quitting would be just as gloriously absurd as winning in the first place, and even more infuriating to their enemies. One television psychologist claimed to know the truth. She pointed out that Chomp had refused the Secret Service protection to which all ex-presidents, including the quitters, are entitled. He even refused to take the precautions suggested by his own private security team. This legendary germaphobe insisted on glad-handing his adoring fans after every event, sometimes for hours. What he was doing, the psychologist claimed, was trying to get shot.

Formerly an editor and writer for travel guides, Jeff Soloway is now a book editor in New York City. In 2014 he won the Robert L. Fish Memorial Award from the Mystery Writers of America. 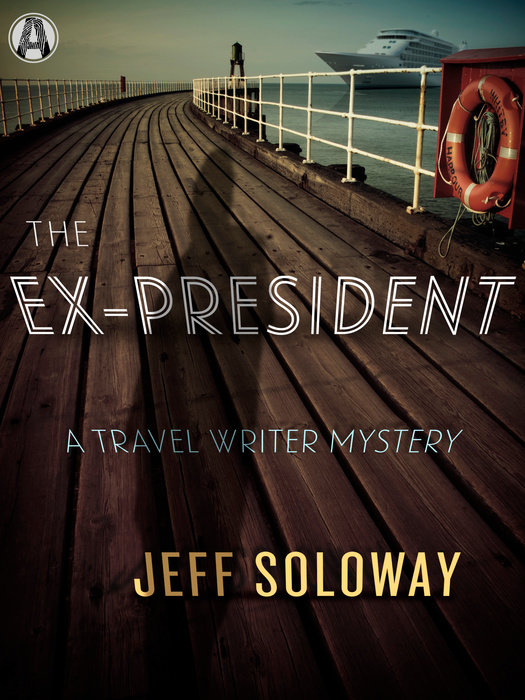