With bedroom eyes and racetrack curves, Kenna Sinclair seems like just another pretty Kentucky girl. But she can also read minds, erase memories, and jump through time—a skill set that comes in handy when her matchmaking granny sends her back to thirteenth-century Scotland on the pretext of visiting her older sister. When she encounters the clan’s womanizing man-at-arms, Kenna instantly knows the gorgeous Highlander has only one thing on his mind. She vows to steer clear of him, but after a single electrifying touch, she finds that playing hard to get won’t be quite so easy. . . .

Bewitched by the first lass who could ever resist him, Colum Garrison will do anything to prove his devotion, even ask for Kenna’s hand in marriage—and swear off his chosen form of recreation until their wedding night. It’s a burden for a man of his thunderous appetite, but the sinful temptation is not his alone: Colum’s fetching bride-to-be is practically trembling with anticipation for a moment that can’t come soon enough. When she’s willing, Colum will be ready and waiting—with a love that lasts a lifetime.

Praise for My Highland Bride

“What a roller coaster of emotions throughout. I love, love, love the Sinclair sisters and can’t wait to read more about the twins. Colum: just yum!”—Cassidy Cayman, author of the Lost Highlander series

“A captivating tale you won’t want to end, with the magic of time runners, sexy kilted men, and consuming love.”—Vonnie Davis, author of the Highlander’s Beloved series

“Sensual . . . The quest for Colum and Kenna’s happiness propels the novel forward and will easily keep the reader’s attention.”—Publishers Weekly

“The incongruity of Kenna’s modern-day language and behavior leads to plenty of laughs, while the serious content has emotional heft.”—Library Journal

An excerpt from My Highland Bride

The door creaked, then softly bumped closed behind him. Colum didna have to turn to know Mother Sinclair had entered the room. The hairs prickling up the back of his neck announced her presence like a blaring battle horn.
The slight old woman hurried past him. Her twisted staff with the odd crystal imbedded in the top tangle of roots lightly thumped out her every step. “I’m sorry to be late, everyone. I had a small situation to attend to in the hall.” Mother Sinclair shot Colum a disapproving look as she lowered herself into a chair.

Colum straightened his shoulders and stood taller. He’d be damned if he’d cower over something as normal as charming a pretty maid. Hell’s fire—he was a man. What the devil did the woman expect?

“I have a very important task for you, Colum Garrison.” Granny straightened her tiny frame in the high-backed chair like a Fae queen holding court. Her eyes narrowed as she glared at him over the tops of her wire-rimmed spectacles. “But you will have to change your ways.”

“Aye?” Colum shifted in place but kept his hands clenched to the small of his back. Damned, if he didna feel like a prisoner waitin’ for the king’s choice of gallows or the axe. “And what ways might those be?”

“I believe you know exactly what ways I’m referring to.” Mother Sinclair took a deep breath and glanced over to Lady Trulie. “You still agree, even considering the man’s past behavior?”

What the hell did she mean by that? Colum stole a glance at Gray, but his fine Highland chieftain refused to look him in the eye. Verra well. He’d battled alone before and won. Aye. But ne’er against Mother Sinclair. Colum sucked in a deep breath and stuck out his chest.

“I think he’ll be just fine, Granny.” Lady Trulie beamed at Colum as though he were a prized horse being selected for breeding with a favored mare. “Besides, you said you received the same vision I did.”

Oh holy hell. Colum stiffened. Both the Lady Trulie and Mother Sinclair had seen him in another of their damn visions? The last time he’d appeared in one of their visions, they’d seen him poisoned and left for dead.

“Very well.” Mother Sinclair’s mouth tightened into a flat, determined line. “In one week’s time, another of my granddaughters”—she motioned toward Lady Trulie—“Trulie’s middle sister closest to her in age, will arrive.”

Colum waited, all the while wondering from where or maybe from when the next Sinclair sister would come. He’d speak to Gray later about the disloyalty of the man toward him. Hell’s fire. He’d fought at the man’s side for years. Did that no’ account for anything? ’Twas damn shameful the way his own chieftain had allowed a pair of women to reign over him in such a way. If all they needed were additional guards to protect such an important visitor, why the blazes had Gray no’ given the order himself? “I’ll see to it additional guards are set in place. Have no fear for the lady’s safety. I shall personally see to it.”

“That’s exactly what we want,” Granny said as her tight-lipped frown softened into a sly smile. “We want you to personally see to Kenna.”

Gray leaned over the fur-covered arm of the settee and scrubbed one hand across his mouth. His gaze was locked on the floor, and his shoulders trembled as he coughed a strange snorting sound into the folds of the plaid draped across his chest.

Was the MacKenna laughing? Colum took a step closer and glared at him. “M’chieftain?”

Gray straightened and let his hand drop to his lap. He sucked in a deep breath, then cleared his throat. “Aye, Colum. See to it the guards are doubled about the keep. But I do charge ye personally with the seeing after of Lady Kenna at all times. As soon as she arrives, she is yer responsibility. See that ye stay at her side.”

Stay at her side. Colum smelled a verra large rat. What the devil did these three play at? “Is there anything more I should know about the Lady Kenna?”

Granny strolled behind the couch and set a staying hand on Gray’s shoulder as he leaned forward to speak again. “I’m sure you’ll figure it all out when the time arrives. But know this . . .” Granny pointed the crystal end of her staff at the center of Colum’s chest. “Trulie and I chose you for a reason. You would be wise not to disappoint us.”

Again, Gray scrubbed a shaking hand across his mouth and muttered something toward his lap. Colum peered closer. Wariness set off more inner alarms as he picked up on the unspoken byplay going on between Lady Trulie’s pointed glare and his chieftain’s apologetic shrug.

Colum swallowed hard and eased closer to the door. Had Gray just said it wasn’t the Lady Kenna’s safety that concerned him? Colum studied Gray closer. Aye and fer sure, the man had said just that—he felt certain of it.

Lore a’mighty, may the gods have mercy on my soul. 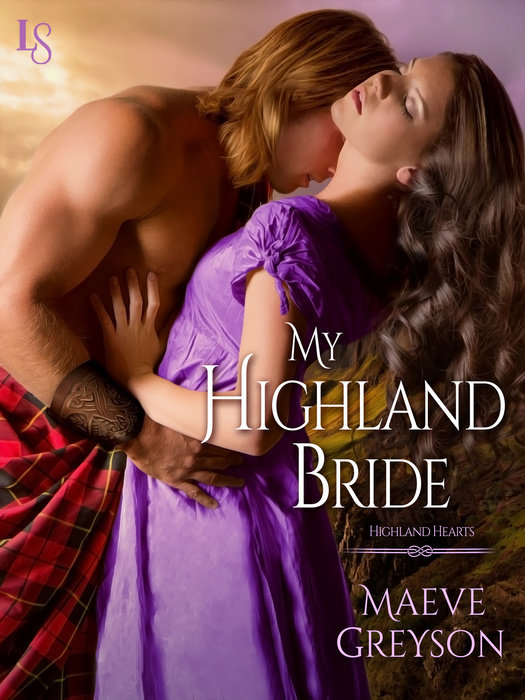