In this highly anticipated cookbook, culinary instructor and baker David Norman explores the European breadmaking traditions that inspire him most--from the rye breads of France to the saltless ciabattas of Italy to the traditional Christmas loaves of Scandinavia. Norman also offers recipes for traditional foods to accompany these regional specialties, so home bakers can showcase their freshly made breads alongside a traditional Swedish breakfast spread, oysters with mignonette, or country pâté, to name a few examples. With rigorous, detailed instructions plus showstopping photography, this book will surprise and delight bakers of all stripes.

An excerpt from Bread on the Table

“Good bread is the most fundamentally satisfying of all foods; and good bread with fresh butter, the greatest of feasts.” —JAMES BEARD, Beard on Bread

Despite these words from Beard, most of the time bread is just part of the feast—eaten alongside, wrapped around, or placed under other food. In these pages, I want to share my years of travel and baking with you through these recipes for a variety of breads and the meals, from a simple sandwich on the street to elaborate dinners, that I have enjoyed with them.

Bread, in its myriad forms, is eaten the world over. I have long been fascinated with how breads have developed alongside different cuisines and how they fit in with their way of eating. Some cultures put bread on the table for every meal, at the ready to sop up any sauce, while elsewhere, the centerpiece of a meal is a variety of sliced breads that are served with an assortment of toppings. In France, it is not uncommon to serve extra bread alongside a croque monsieur.

This book is not a comprehensive catalog of world bread and cuisines; it is more personal than that. Instead it is drawn from my own travels and baking experiences over the last thirty-odd years. The book is also informed by what I have learned eating bread in different places, which is that bread traditions developed alongside a complementary culinary tradition. This idea first germinated with me while I was teaching the Art of International Bread Baking, the professional baking program at the French Culinary Institute in New York City. At the time,  each six-week course was divided into two-week sections for French, German, and Italian breads. Academically, I understood that each culture had its own approach to making bread, but my own travels and time spent living abroad informed me even more about how these breads were eaten in different locations. My time spent breaking bread at tables showed me how the food and the bread fit together.

Sometimes there is a particular bread that is eaten with a dish or type of food, like the dark French rye bread, pain de seigle, that is served with oysters and other raw seafood. Other breads, like the salt-free bread of Tuscany, can be bewildering until they are eaten with the boldly flavored and often salty local specialties. Sandwiches play their part in all of these cultures, and can range from a simple buttered baguette with thinly shaved ham to a sauce-drenched, five-napkin affair like the torta ahogada from Guadalajara.

The breads in this book are presented with a culinary context, from a German Brotzeit to a French baker’s meal to Tuscan bread with a hunter’s stew. Each chapter explores one of the bread-baking traditions that have influenced my career and is followed by a section that puts those breads on the table with recipes for traditional food pairings. I find these pairings transporting, and I hope you will explore them with me.

How I Learned to Eat Bread

In the late summer of 1981, I landed at Kastrup Airport in Copenhagen to begin a year as a high school exchange student. Like countless others before me, I was about to start an adventure that would change and influence my life in ways that were unimaginable at the time. Even so, I never would have predicted that it would be my first step toward becoming a bread baker. In truth, it would be another four years before I kneaded my first dough. But when my host father, Hans-Erik Jonsén, and his son, Michael, brought me back to their home outside of Halmstad, Sweden, I discovered foods and breads I had never tasted before, and other ways of eating that were as foreign as the language.

Both of my parents were from the Midwest. (We moved from northern Minnesota to the Florida Panhandle when I was ten.) They were adventurous cooks; they belonged to a gourmet club, staging elaborate multicourse meals every month or so with several other couples. We always ate well at home. My dad especially liked to try new and different recipes and considered James Beard his culinary hero. Neither of them baked much, though. They made pies, birthday cakes, and cookies with my sister and me, but the only bread I remember was packaged white bread, mostly for sandwiches or toast. I probably had a sandwich or two on rye as my mom’s father loved a good Reuben, but the rye available then was barely distinguishable from white bread. So when four or five varieties of bread appeared on the table every morning and evening in Sweden, it was a revelation to me.

In Sweden, two meals each day, breakfast and the evening meal, revolve around bread. Slices from several loaves and some knäckebröd, a crispbread, were placed in a basket on the kitchen table, along with a parade of toppings that came out of the refrigerator and cupboard.

In fact, there is a word, pålägg, which comes from på meaning “on” and lägga meaning “to lay.” Pålägg is everything that you lay on top of bröd (bread). Cold cuts (such as ham), summer sausage, salami, cheeses, honey, pâté, pickles, and occasionally some pickled fish and salmon roe in a tube were set out on the table with a tub of butter in the center. Everyone had a small wooden board and a wooden spreader to build their own smörgås, or open-faced sandwiches. The Jonsén family always had a pot of tea as well.

Around noon, we would have middag (it literally translates to “midday” but means dinner) which is traditionally the one hot meal of the day. Interestingly, bread was not typically served at middag. More often than not, potatoes were the starch. I loved the sauces and gravies, especially when we went to eat with my host father’s parents, as his mother was a great cook. I made sure I soaked up every last bit of sauce or gravy with the potatoes.

Britt, my host mother, was also a great cook. Even better, she was a great baker. Each month she would go to her mother’s house for a baking day. Those evenings, she would come home with her share of the spoils and load the cupboard and freezer with a month’s supply of cinnamon buns and cookies for fika, the all-important Swedish coffee break. My favorite, though, were the loaves of fullkornsbröd, dense rye bread studded with cracked rye and rolled in wheat bran. While most of our daily bread came from the grocery store, and it was far better than any bread we could buy at the Piggly Wiggly, these homemade loaves were extra special. Dense and dark, the cracked rye gave the thin slices a pleasant chew. My favorite topping was shavings of farmers’ cheese, its dairy twang melding with the earthy, caramelly sweetness of the bread.

Around town, there were PSA billboards encouraging people to eat at least seven slices of bread a day. Based on my experience in the Jonsén family, the encouragement hardly seemed necessary, but I suppose it signaled a change in eating habits that had started even then, as Swedes began eating more fast food and lunches on the go and shifting toward eating middag at the end of the day.

Learning Swedish piqued my interest in languages, so I decided to study German at the University of Florida in Gainesville. For my junior year of college, I won a scholarship from the Federation of German-American Clubs to study in Munich. Living in student housing and attending university was quite different from my stay with a family in Sweden, but one thing was familiar—great bread and lots of it. I found so many dark and toothsome varieties of rye breads, some of which reminded me of the Swedish breads I had grown to love and crave, but there were also many new types. I have heard it said that there are more than three hundred different rye breads made
throughout Germany.

Living in the student housing, called Studentenstadt, meant that I did not experience the typical rhythm of a family’s day and meals. Constrained by my age and budget, many of my meals were eaten in the university canteen or at one of the student-run pubs in the Studentenstadt. Restaurant meals were few and far between. When we did eat out, it was often some cuisine other than German, such as Greek, or when I was especially homesick, Mexican. In the student pubs, we were more likely to have an Asian-influenced one-pot meal, a vegetable curry, or perhaps a Moroccan stew. Though my status as a student partially dictated these choices, there was also a national trend toward Mediterranean and Eastern cuisine during my time in Germany, in part due to a curiosity of the world and relatively inexpensive travel opportunities, but also shaped by a certain amount of reluctance in claiming too much of their Germanness.

One of my favorite rituals and fondest memories is of the brunch that we had nearly every Saturday in the common room on our floor of the Studentenstadt. Unlike my American college dorms, we each had our own room with a private bath and a kitchenette. On Saturday mornings, someone would run to the bakery for fresh rolls, a couple of people would brew coffee, someone else would make a pot of tea, and we would all converge on the common room with whatever we might have in our fridges—cheese, cold cuts, or yogurt—and we would have a meal together. Always fresh from the bakery, among the white rolls known as semmeln, were pretzels. My best friend, Martin, taught me the Bavarian way to eat them, with butter.

When I returned to Gainesville and chicken wings, burritos, pizza, and garlic knots, there were two things that I really missed from Germany: great beer and great bread. One day, as I was browsing the bookstore near campus, I came across a copy of Beard on Bread. I thought of my father and his dog-eared James Beard cookbooks and decided to give bread baking a try, as this seemed like the only way I would taste great bread without getting on a plane. Starting with the basic white bread recipe, I worked on kneading and proofing and baking simple breads with dynamite flavor.

DAVID NORMAN is the head doughpuncher and a partner at Easy Tiger Bake Shop and Beer Garden in Austin, Texas, and was recently selected as one of the top ten bread bakers in the country by Dessert Professional magazine. He has worked at some of the country's best bread bakeries from Seattle (Grand Central Bakery) to New York City (Bouley Bakery), and has taught professional bread courses at the French Culinary Institute and the San Francisco Baking Institute, as well as classes for home bakers. 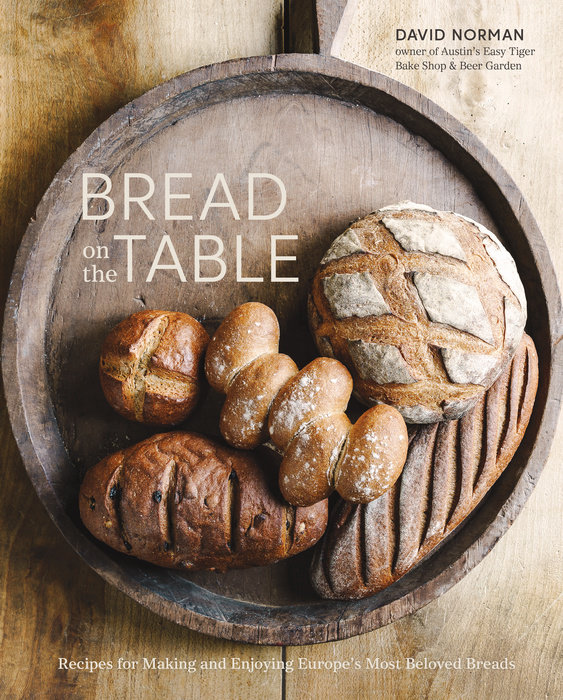