“You're hooked, you feel every cut, grope up every cliff, swallow water with every spill of the canoe, sweat with every draw of the bowstring. Wholly absorbing [and] dramatic.”—Harper's Magazine

The setting is the Georgia wilderness, where the states most remote white-water river awaits. In the thundering froth of that river, in its echoing stone canyons, four men on a canoe trip discover a freedom and exhilaration beyond compare. And then, in a moment of horror, the adventure turns into a struggle for survival as one man becomes a human hunter who is offered his own harrowing deliverance.

“A tour de force . . . How a man acts when shot by an arrow, what it feels like to scale a cliff or to capsize, the ironic psychology of fear: these things are conveyed with remarkable descriptive writing.”—The New Republic

“A fine and honest book that hits the reader's mind with the sting of a baseball just caught in the hand.”—The Nation

"A novel that will curl your toes . . . Dickey's canoe rides to the limits of dramatic tension."—New York Times Book Review

An excerpt from Deliverance

THERE WAS SOMETHING about me that usually kept me from dreaming, or maybe kept me from remembering what I had dreamed; I was either awake or dead, and I always came back slowly. I had the feeling that if it were perfectly quiet, if I could hear nothing, I would never wake up. Something in the world had to pull me back, for every night I went down deep, and if I had any sensation during sleep, it was of going deeper and deeper, trying to reach a point, a line or border.

This time the wind woke me, and I dragged upward and tried, with the instinct of survival, to get clear of where I had been, one more time. I was used to hearing Martha’s breath bring me back, for she breathed heavily, but this time it was the wind. First the wind by itself and then the wind ringing a little set of metal figures on strings that Martha had put out on the patio — bronze figures of birds surrounding an owl which, because of a long wind vane attached to him, moved when the air moved and touched the others, making a chiming sound something like the one made by the Chinese glass wind-bells that everybody used to have in the thirties, when I was growing up. It was a small, inconstant sound, a lovely sound, I always thought, and as I came up from the sleep-dark to the real dark of the room, I had an idea that it might evoke something, and I lay with the room becoming actual around me, in the dark, beside my wife, in a body.

I reached for Martha, as I always did, and her head stirred under the towel she wore at night. I held her shoulder lightly, and it was then I remembered I was going with Lewis. The routine I was used to pulled at me, but something in me rose daringly above it, full of fear and feeling weak and incompetent but excited. I took Martha in my arms to see if she would try to get away and back to sleep, or come to me for warmth, and then go back.

She was a thin girl whom I had married fifteen years before; she had been working as a surgical nurse. The fact that she might or might not be pretty did not occur to me at all, though friends, without great enthusiasm or conviction, used to tell me she was. But the question of beauty, beyond certain very obvious considerations, never really interested me in women; what I looked for and felt for was the spark, the absolutely personal connection, and when I found a genuine form of it, small but steady, I had married it. There was nothing to regret about this, and I didn’t regret it. She was a good wife and a good companion, a little tough, but with a toughness that got things done. She was genuinely proud of my being vice-president of a company, and she insisted on believing that I had talent as an artist, though I had none. I was a mechanic of the graphic arts, and when I could get the problem to appear mechanical to me, and not the result of inspiration, I could do something with it. On this principle I had done a few big collage-things for the living room, made from torn-up posters, movie magazines, sports headlines and the like. And that, as far as art was concerned, was it. Remembering these, I thought that it might be that Martha cared for them not so much because I had done them, but because they represented some side of me she didn’t know. But it was a wrong faith on her part, and, though I never told her how I felt, I never encouraged it. I drew on her, and she slid to me.

“Six,” I said, looking at the frail hands of the clock by the bed as they pulsed and glowed. “Lewis is coming by at a little before six-thirty.”

“What do you have to do to get ready?” she asked.

“Not much. Just throw on my old nylon flying suit and put on some tennis shoes. And, when Lewis comes, load up the back of his car with my stuff. There isn’t much, but I’ve got it all ready. I piled it out in the living room after you went to bed.”

“It’s not something I’m dying to do,” I said. “And I won’t die if I don’t do it. But the studio is really bugging me. I had a terrible time yesterday, until I got down to doing some work. It seemed like everything just went right by me, nothing mattered at all. I couldn’t have cared less about anything or anybody. If going up in the woods with Lewis does something about that feeling, I’m for it.”

“Lord, no,” I said, but it partly was, just as it’s any woman’s fault who represents normalcy.

“I wish you didn’t have to go off like this. I mean, didn’t want to. I wish there was something I could do.”

“We’ll make time. There’s nothing Lewis has to offer that matters all that much. He can wait. I don’t feel like I can.”

She had great hands; they knew me. There was something about the residue of the nursing in her that turned me on: the practical approach to sex, the very deliberate and frank actions that give pleasure to people. The blood in me fell and began to rise in the dark, moving with her hands and the slight cracking of the lubricant. Martha put a pillow in the middle of the bed, threw back the covers with a windy motion and turned facedown on the pillow. I knelt and entered her, and her buttocks rose and fell. “Oh,” she said. “Oh yes.”

It was the heat of another person around me, the moving heat, that brought the image up. The girl from the studio threw back her hair and clasped her breast, and in the center of Martha’s heaving and expertly working back, the gold eye shone, not with the practicality of sex, so necessary to its survival, but the promise of it that promised other things, another life, deliverance.

James Dickey was born in Atlanta. One of America's best known poets and a winner of the National Book Award for Buckdancer's Choice, he is the author of the National bestseller To The White Sea, a member of the National Institute of Arts and Letters, a fellow in the American Academy of Arts and Sciences, and the Carolina Professor and Poet-in-Residence at the university of South Carolina. 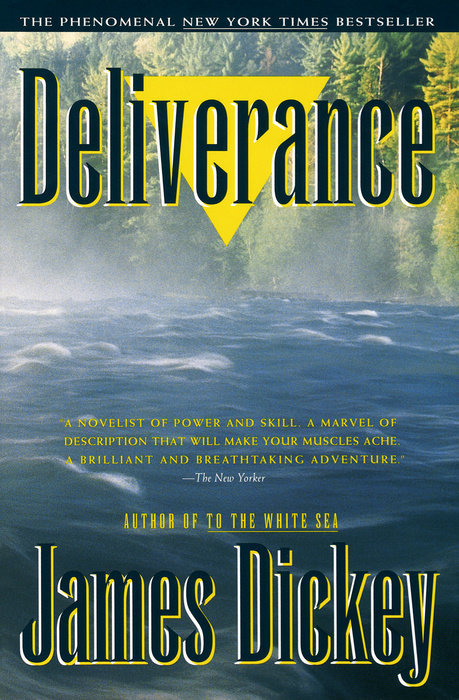