“Ralph Ellison’s generosity, humor and nimble language are, of course, on display in Juneteenth, but it is his vigorous intellect that rules the novel. . . . A majestic narrative concept.”—Toni Morrison

In Washington, D.C., in the 1950s, Adam Sunraider, a race-baiting senator from New England, is mortally wounded by an assassin’s bullet while making a speech on the Senate floor. To the shock of all who think they know him, Sunraider calls out from his deathbed for Alonzo Hickman, an old black minister, to be brought to his side. The reverend is summoned; the two are left alone. “Tell me what happened while there’s still time,” demands the dying Sunraider.

Out of their conversation, and the inner rhythms of memories whose weight has been borne in silence for many long years, a story emerges. Senator Sunraider, once known as Bliss, was raised by Reverend Hickman in a black community steeped in religion and music (not unlike Ralph Ellison’s own childhood home) and was brought up to be a preaching prodigy in a joyful black Baptist ministry that traveled throughout the South and the Southwest. Together one last time, the two men retrace the course of their shared life in an “anguished attempt,” Ellison once put it, “to arrive at the true shape and substance of a sundered past and its meaning.” In the end, the two men confront their most painful memories, memories that hold the key to understanding the mysteries of kinship and race that bind them, and to the senator’s confronting how deeply estranged he had become from his true identity.

In Juneteenth, Ralph Ellison evokes the rhythms of jazz and gospel and ordinary speech to tell a powerful tale of a prodigal son in the twentieth century. At the time of his death in 1994, Ellison was still expanding his novel in other directions, envisioning a grand, perhaps multivolume, story cycle. Always, in his mind, the character Hickman and the story of Sunraider’s life from birth to death were the dramatic heart of the narrative. And so, with the aid of Ellison’s widow, Fanny, his literary executor, John Callahan, has edited this magnificent novel at the center of Ralph Ellison’s forty-year work in progress—its author’s abiding testament to the country he so loved and to its many unfinished tasks.

An excerpt from Juneteenth

In his later years, after hours, if he had put in a good day at his desk, Ralph Ellison was known to chuckle at the parallel between the “crazy country” he loved and contended with and what in 1969 he called his “novel‐in‐progress (very long in progress).” Ellison’s projected second novel was a glint in his eye as early as June 1951, when he wrote Albert Murray that he was “trying to get going on my next book before this one [Invisible Man] is finished . . .” In April 1953 he told Murray of his “plan to scout the Southwest. I’ve got to get real mad again, and talk with the old folks a bit. I’ve got one Okla. book in me I do believe.” By 1954 Ellison had begun to put pen to paper, and in April 1955 he sent Murray a “working draft” of an episode. From then on, even as he wrote numerous essays, taught at half a dozen colleges, held the Albert Schweitzer Professorship in the Humanities at New York University, and, in the name of citizenship, did more than his duty on national boards and commissions, the second novel remained Ellison’s hound of heaven (and hell) pursuing him “down the arches of the years,” pursuing him “down the labyrinthine ways/Of [his] own mind” until the end of his life in 1994.

From 1955 to 1957 Ellison was at work on the second novel as a fellow at the American Academy in Rome. “It was in Rome during 1956,” he told John Hersey, that he “conceived the basic situation, which had to do with a political assassination.” Not too long afterward, in June 1959, Ellison wrote Murray that “Bellow [with whom Ellison was sharing a house in Tivoli, New York, close to Bard College, where both men taught] has read book two and is to publish about fifty pages in a new mag which he is editing—THE NOBLE SAVAGE—of all things.” Telling David Remnick of The New Yorker in 1994 that Ellison had “let me read a considerable portion of it—a couple of hundred pages, at least,” Bellow remembered vividly that “all of it was marvelous stuff, easily on a level with Invisible Man.” In a later reminiscence Bellow wrote, “In what he did, Ralph had no rivals. What he did no one else could do—a glorious piece of good fortune for a writer.”

During the next five or six years Ellison published three more excerpts in literary quarterlies. Meanwhile, the contract for the book, dated August 17, 1965, stipulated delivery on September 1, 1967. In his own mind Ellison was moving toward completion in the summer and fall of 1967 as he revised the novel at his summer home outside Plainfield, a village in the Berkshires. Then, in the late afternoon of November 29, 1967, Ellison and his wife, Fanny, returned from shopping to find the house in flames. With regret in her voice, Mrs. Ellison recalled being restrained from approaching the burning house by volunteer firemen who had arrived too late. “I wish I’d been able to break the window and pull out Ralph’s manuscript,” she told me years later. “I knew right where it was.”

The Plainfield fire has taken on the proportions of myth to such an extent that it is useful to revisit what Ellison had to say about it over the years. Ten days after the event, he wrote Charles Valentine that “the loss was particularly severe for me, as a section of my work‐in‐progress was destroyed with it.” Later in the same letter Ellison outlined the task he saw before him: “Fortunately, much of my summer’s work on the new novel is still in my mind and if my imagination can feed it I’ll be all right, but I must work quickly.” According to James Alan McPherson, Ellison told him in 1969 that the fire “destroyed a year’s worth of revisions,” but that “he is presently in the process of revising it again.” In 1980 Ellison told a reporter from the Daily Hampshire Gazette, “I guess I’ve been able to put most of it back together.” To David Remnick, just before his eightieth birthday in 1994, Ellison made perhaps his fullest public comment on the fire: “There was, of course, a traumatic event involved with the book. We lost a summer house and, with it, a good part of the novel. It wasn’t the entire manuscript, but it was over three hundred and sixty pages. There was no copy.”

By the time of McPherson’s account, done with Ellison’s blessing and collaboration in 1970, the second novel had begun to loom larger than a novel or a work‐in‐progress. “He has enough typed manuscripts to publish three novels,” McPherson wrote, “but is worried over how the work will hold up as a total structure. He does not want to publish three separate books, but then he does not want to compromise on anything essential. ‘If I find that it is better to make it a three‐section book, to issue it in three volumes, I would do that as long as I thought that each volume had a compelling interest in itself,’ ” Ellison told McPherson. On and off for the rest of his life, Ellison continued to work on his mythic saga of race and identity, language and kinship in the American experience. Sometimes revising, sometimes reconceiving, sometimes writing entirely new passages into an oft‐ reworked scene, he accumulated some two thousand pages of typescripts and printouts by the time of his death. His last published excerpt from the novel, an offshoot from the main text titled “Backwacking: A Plea to the Senator,” appeared in 1977. Although he continued to write and revise until a fatal illness struck him at the end of March 1994, just four weeks after his eightieth birthday, Ralph Ellison did not live to finish his forty‐year work‐in‐progress.

Ellison left no instructions about his work except the wish, expressed to Mrs. Ellison and to me, that his books and papers be housed at the national library, the Library of Congress. A few days after his death, Mrs. Ellison walked me into his study, a room adjoining the living room still wreathed in a slight haze of cigar and pipe smoke. As if to protest his absence, the teeming bookshelves had erupted in chaos over his desk, chair, computer table, and copying machine, finally covering the floor like a blizzard of ash. Anyone else might have given up, but Fanny Ellison persevered in her effort to do the right thing by what her husband had left behind. She whetted my appetite by showing me stacks of printouts, scraps of notes, jottings on old newspapers and magazine subscription cards, and several neat boxes of computer disks. At her direction I removed several thick black binders of typescript going back to the early 1970s from the first of two long, rectangular black steel filing cabinets next to his desk. The other cabinet, I was to discover, contained folder after folder of earlier drafts painstakingly labeled according to character or episode.

The question can’t be put any better than that, I thought. Many times I followed the twists and turns of Ellison’s plot, and his characters’ movements through space and time; traced and retraced their steps as they moved from Washington, D.C., south to Georgia and Alabama, southwest to Oklahoma, back again to the nation’s capital, and reached back with them from the novel’s present moment of the mid‐fifties to spots of time in the twenties and thirties and even farther to the first decade of the new century when the Oklahoma Territory emerged as a state. And always, Mrs. Ellison’s question pursued me and brought me back to the task at hand, for it was always clear that at the center of Ellison’s saga was the story of Reverend Hickman and Senator Sunraider, from the Senator’s birth as Bliss to his death. To use an architectural metaphor, this was the true center of Ellison’s great, unfinished house of fiction. And although he did not complete the wings of the edifice, their absence does not significantly mar the organic unity of the book we do have, Juneteenth. 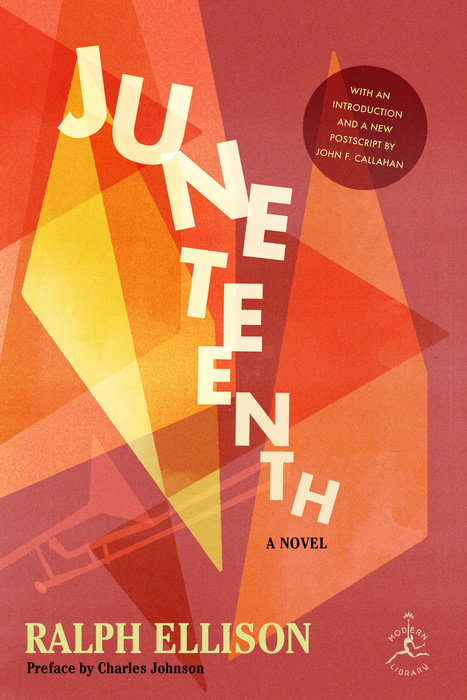