The Fiery Cross, A Breath of Snow and Ashes, An Echo in the Bone, Written in My Own Heart's Blood

As their story is told on the hit Starz series, the unforgettable adventures of steadfast Highland warrior Jamie Fraser and time-traveling Englishwoman Claire Randall continue in the ongoing Outlander novels. This eBook bundle includes the fifth, sixth, seventh, and eighth books in the series:

The year is 1771, and war is coming. Jamie Fraser’s wife tells him so. Little as he wishes to, he must believe it, for hers is a gift of dreadful prophecy—a time-traveler’s certain knowledge. Claire’s unique view of the future has brought him both danger and deliverance in the past. Her knowledge of the oncoming revolution is a flickering torch that may light his way through the perilous years ahead—or ignite a conflagration that will leave their lives in ashes.

“A grand adventure written on a canvas that probes the heart, weighs the soul and measures the human spirit across [centuries].”—CNN, on The Fiery Cross

“The large scope of the novel allows Gabaldon to do what she does best, paint in exquisite detail the lives of her characters.”—Booklist, on A Breath of Snow and Ashes

“Features all the passion and swashbuckling that fans of this historical fantasy series have come to expect.”—People, on Written in My Own Heart’s Blood

HAPPY THE BRIDE
THE SUN SHINES ON

I woke to the patter of rain on canvas, with the feel of my first husband’s kiss on my lips. I blinked, disoriented, and by reflex put my fingers to my mouth. To keep the feeling, or to hide it? I wondered, even as I did so.

Jamie stirred and murmured in his sleep next to me, his movement rousing a fresh wave of scent from the cedar branches under our bottom quilt. Perhaps the ghost’s passing had disturbed him. I frowned at the empty air outside our lean-to.

Go away, Frank, I thought sternly.

It was still dark outside, but the mist that rose from the damp earth was a pearly gray; dawn wasn’t far off. Nothing stirred, inside or out, but I had the distinct sense of an ironic amusement that lay on my skin like the lightest of touches.

Shouldn’t I come to see her married?

I couldn’t tell whether the words had formed themselves in my thoughts, or whether they—and that kiss—were merely the product of my own subconscious. I had fallen asleep with my mind still busy with wedding preparations; little wonder that I should wake from dreams of weddings. And wedding nights.

I smoothed the rumpled muslin of my shift, uneasily aware that it was rucked up around my waist and that my skin was flushed with more than sleep. I didn’t remember anything concrete about the dream that had wakened me; only a confused jumble of image and sensation. I thought perhaps that was a good thing.

I turned over on the rustling branches, nudging close to Jamie. He was warm and smelled pleasantly of woodsmoke and whisky, with a faint tang of sleepy maleness under it, like the deep note of a lingering chord. I stretched myself, very slowly, arching my back so that my pelvis nudged his hip. If he were sound asleep or disinclined, the gesture was slight enough to pass unnoticed; if he were not …

He wasn’t. He smiled faintly, eyes still closed, and a big hand ran slowly down my back, settling with a firm grip on my bottom.

“Mmm?” he said. “Hmmmm.” He sighed, and relaxed back into sleep, holding on.

I nestled close, reassured. The immediate physicality of Jamie was more than enough to banish the touch of lingering dreams. And Frank—if that was Frank—was right, so far as that went. I was sure that if such a thing were possible, Bree would want both her fathers at her wedding.

I was wide awake now, but much too comfortable to move. It was raining outside; a light rain, but the air was cold and damp enough to make the cozy nest of quilts more inviting than the distant prospect of hot coffee. Particularly since the getting of coffee would involve a trip to the stream for water, making up the campfire—oh, God, the wood would be damp, even if the fire hadn’t gone completely out—grinding the coffee in a stone quern and brewing it, while wet leaves blew round my ankles and drips from overhanging tree branches slithered down my neck.

Shivering at the thought, I pulled the top quilt up over my bare shoulder and instead resumed the mental catalogue of preparations with which I had fallen asleep.

Food, drink … luckily I needn’t trouble about that. Jamie’s aunt Jocasta would deal with the arrangements; or rather, her black butler, Ulysses, would. Wedding guests—no difficulties there. We were in the middle of the largest Gathering of Scottish Highlanders in the Colonies, and food and drink were being provided. Engraved invitations would not be necessary.

Bree would have a new dress, at least; Jocasta’s gift as well. Dark blue wool—silk was both too expensive and too impractical for life in the backwoods. It was a far cry from the white satin and orange blossom I had once envisioned her wearing to be married in—but then, this was scarcely the marriage anyone might have imagined in the 1960s.

I wondered what Frank might have thought of Brianna’s husband. He likely would have approved; Roger was a historian—or once had been—like Frank himself. He was intelligent and humorous, a talented musician and a gentle man, thoroughly devoted to Brianna and little Jemmy.

Which is very admirable indeed, I thought in the direction of the mist, under the circumstances.

You admit that, do you? The words formed in my inner ear as though he had spoken them, ironic, mocking both himself and me.

Jamie frowned and tightened his grasp on my buttock, making small whuffling noises in his sleep.

You know I do, I said silently. I always did, and you know it, so just bugger off, will you?!

I turned my back firmly on the outer air and laid my head on Jamie’s shoulder, seeking refuge in the feel of the soft, crumpled linen of his shirt.

I rather thought Jamie was less inclined than I—or perhaps Frank—to give Roger credit for accepting Jemmy as his own. To Jamie, it was a simple matter of obligation; an honorable man could not do otherwise. And I knew he had his doubts as to Roger’s ability to support and protect a family in the Carolina wilderness. Roger was tall, well-built, and capable—but “bonnet, belt, and swordie” were the stuff of songs to Roger; to Jamie, they were the tools of his trade.

The hand on my bottom squeezed suddenly, and I started.

“Sassenach,” Jamie said drowsily, “you’re squirming like a toadling in a wee lad’s fist. D’ye need to get up and go to the privy?”

“I am now,” he said. The hand fell away, and he stretched, groaning. His bare feet popped out at the far end of the quilt, long toes spread wide.

“Och, dinna fash yourself,” he assured me. He cleared his throat and rubbed a hand through the ruddy waves of his loosened hair, blinking. “I was dreaming like a fiend; I always do when I sleep cold.” He lifted his head and peered down across the quilt, wiggling his exposed toes with disfavor. “Why did I not sleep wi’ my stockings on?”

“Really? What were you dreaming about?” I asked, with a small stab of uneasiness. I rather hoped he hadn’t been dreaming the same sort of thing I had.

“Horses,” he said, to my immediate relief. I laughed.

“What sort of fiendish dreams could you be having about horses?”

“Oh, God, it was terrible.” He rubbed his eyes with both fists and shook his head, trying to clear the dream from his mind. “All to do wi’ the Irish kings. Ye ken what MacKenzie was sayin’ about it, at the fire last night?”

“Irish ki—oh!” I remembered, and laughed again at the recollection. “Yes, I do.”

Roger, flushed with the triumph of his new engagement, had regaled the company around the fireside the night before with songs, poems, and entertaining historical anecdotes—one of which concerned the rites with which the ancient Irish kings were said to have been crowned. One of these involved the successful candidate copulating with a white mare before the assembled multitudes, presumably to prove his virility—though I thought it would be a better proof of the gentleman’s sangfroid, myself.”

“I was in charge o’ the horse,” Jamie informed me. “And everything went wrong. The man was too short, and I had to find something for him to stand on. I found a rock, but I couldna lift it. Then a stool, but the leg came off in my hand. Then I tried to pile up bricks to make a platform, but they crumbled to sand. Finally they said it was all right, they would just cut the legs off the mare, and I was trying to stop them doing that, and the man who would be king was jerkin’ at his breeks and complaining that his fly buttons wouldna come loose, and then someone noticed that it was a black mare, and that wouldna do at all.”

I snorted, muffling my laughter in a fold of his shirt for fear of wakening someone camped near us.

“Is that when you woke up?”

“No. For some reason, I was verra much affronted at that. I said it would do, in fact the black was a much better horse, for everyone knows that white horses have weak een, and I said the offspring would be blind. And they said no, no, the black was ill luck, and I was insisting it was not, and …” He stopped, clearing his throat.

He shrugged and glanced sideways at me, a faint flush creeping up his neck.

“Aye, well. I said it would do fine, I’d show them. And I had just grasped the mare’s rump to stop her moving, and was getting ready to … ah … make myself king of Ireland. That’s when I woke.”

I snorted and wheezed, and felt his side vibrate with his own suppressed laughter.

“Oh, now I’m really sorry to have wakened you!” I wiped my eyes on the corner of the quilt. “I’m sure it was a great loss to the Irish. Though I do wonder how the queens of Ireland felt about that particular ceremony,” I added as an afterthought.

The Fiery Cross, A Breath of Snow and Ashes, An Echo in the Bone, Written in My Own Heart's Blood 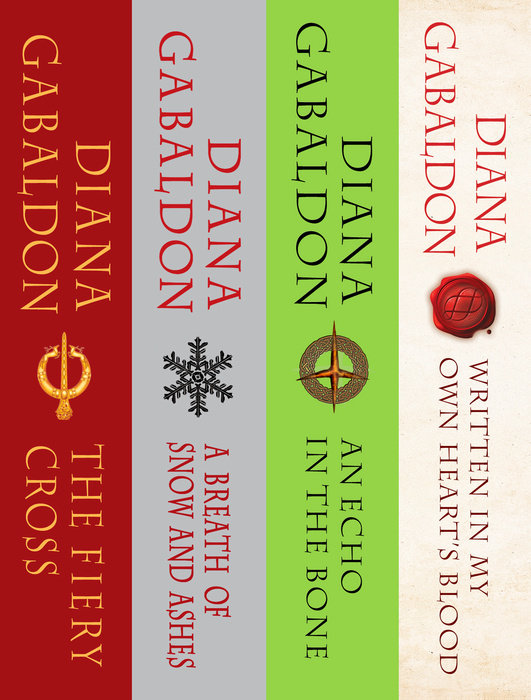