The bestselling author of the Heller Brothers series stirs up a tempting cocktail of fun and seduction as a sexy SEAL-turned-bartender treats a buttoned-up scientist to a wild weekend . . . and a change of heart.

Former Navy SEAL Beck Whitcomb left a world of privilege to prove he could make his own way. Money, mansions, expensive cars—none of it could heal the loss of his older brother, or buy his parents’ love. Now, after using his trust fund to open the Conquistadors tequila bar with his brothers-in-arms, Beck has it all: good friends, fine liquor, and hot hookups. When it comes to women, commitment’s not his thing—until he gets a taste of the pretty professor who walks into his bar . . . and winds up in his bed.

Hayden Miles knows all too well that emotional decisions can lead to heartbreak, and nothing screams “bad decision” like a playboy bartender with inked biceps and a wicked smile. Still, their chemistry is off-the-charts explosive—and Hayden knows her chemistry. For once, this good girl longs to let loose. But is she willing to risk the pain to quench her thirst? With the promise of more on the table, Hayden’s eager to believe . . . before she misses her shot.

“This book sizzles on every page, definitely the hottest book I’ve read all year!”—Christi Barth, author of Risking It All

“Body Shot should appeal to fans who like some spicy sensuality and sizzle in their contemporary romance.”—Babbling About Books, and More!

An excerpt from Body Shot

“We need to have more fun.”

Hayden peered at her friend Carrie through bleary, work-tired eyes. Sun flooded in the big windows of the restaurant on Miramar Road in San Diego where they’d met for lunch, gleaming off stainless steel tables and chairs and dark wood floors, another gorgeous day in Southern California. “I have lots of fun.”

“Phht.” Carrie eyed her. “You really look like it.”

Hayden smoothed her ponytail back. “The last couple of weeks have been a little stressful.”

Carrie snorted. “You spend half your life in a lab looking through a microscope and the other half in your office.”

Her face softened. “I know you love your work, Hayden, and you’re amazing at what you do, but seriously, I’m worried about you.”

“Ha. I knew this was really about me.” Hayden sighed and rubbed her eyes. “You sound just like Aunt Gina and Uncle Colin. They keep telling me I need to get out more. Before Aunt Gina had her fall, they were trying to fix me up with some guy—a friend’s son or grandson, or something.”

“I’m not going on a date with a man I don’t even know.” Hayden shuddered. “Can you imagine anything more excruciating? Trying to make small talk and be on your best behavior to impress someone?”

“That’s what a date is, yes,” Carrie said dryly. “I can imagine because I’ve done it occasionally.”

“Okay, true.” Carrie shrugged. “Look, I know you better than anyone, and I like my quiet alone time too. But it’s not healthy for anyone to work so much.”

“You work a lot too. And when you’re not working, you’re out taking pictures.”

“That’s my passion, like you have yours. I have to be ‘on’ all the time when I’m in front of the camera, and it’s exhausting. So taking pictures is my relaxation. I just think you need some time away from the lab, some time just for yourself, to have fun.”

“I’m too tired to argue with you.” Yes, fourteen-hour days, seven days a week were taking their toll. She’d been working so hard on the proposal for this large funding grant that would finance the important research they did. It was a lengthy process she’d been toiling on for some time. The granting agency wanted information not only about her background but also about the background of her research team, their facilities, the equipment they needed, the time involved, and the overall potential of their scientific outcome. Plus, she’d been looking after her aunt and uncle. “But I’m not going out on dates.” She was serious, introverted, passionate about science and health and her business, and most men in her experience weren’t interested in proteomics, metabolomics, and signaling pathways.

“Fine, then at least come out with me a little more often. We can go out just the two of us and have some fun. Honestly, Hayden . . . I miss you.”

“You’re good.” Hayden pursed her lips. “Although I know how well you can act, you’re tugging at my heartstrings.”

“At least you admit you have a heart.”

“Of course I have a heart.” Hayden frowned. There weren’t many people she let herself care about in her life, but Carrie was definitely one of them. She loved her aunt and uncle, who had looked after her when her parents died, and she cared about the people who worked for her—in a businesslike, practical kind of way—but she did love Carrie.

They’d been best friends since middle school, the two misfits in their grade—Hayden, with her nose always buried in a book or busy trying to clone a cat, Carrie taller than everyone including the boys, skinny and gangly with heavy-duty braces on her teeth. They’d both been objects of ridicule and rejection—awkward, definitely not into sports, and smarter than most of their classmates. Neither of them had been interested in boys (actually, it would be more truthful to say they wouldn’t admit to being interested in boys, which made the boys’ utter lack of interest in them less humiliating), parties, gel manicures, the latest fashions, or complicated hairstyles. They’d bonded over thrift store clothes, Harry Potter, and volunteering at an animal shelter.

Ironically, Carrie had been spotted by a scout for the Swank Modeling agency at age sixteen and now pretty much had to be interested in manicures and hairstyles and the latest fashions. Even so, when she wasn’t working, she dressed in her own eclectic style and seldom wore makeup.

And Hayden had left the job she’d gotten right out of college to start her own business. She’d believed in what she was doing when others had been skeptical, and she was on the verge of huge success, but the hours she was putting into that meant she had no time for the latest fashions or makeup.

So with their achievements, they could both thumb their noses at the kids who’d made fun of them and shunned them in school. But they didn’t, because who had time for that? Or maybe the truth was that deep down beneath all their successes remained two awkward, socially insecure misfits.

“I miss you too,” she said sincerely to Carrie. “But you’re almost as busy as I am.”

Hayden smiled despite the feeling that she was being pulled away from what was really important. “Great.”

After lunch, Hayden and Carrie parted on the sidewalk, heading to their respective cars. Hayden had parked farther down the street and she set out at a quick pace, nearly late for her one-thirty meeting with Richard, the treasurer of Vanguard Corp, and Kim, her secretary. After that, she had a three o’clock meeting with one of her research teams about a project, and then she needed to get some work done on the presentation she would be giving at an upcoming health-care conference. She checked emails on her cellphone as she strode along the sidewalk. She frowned at her phone, reading about a problem with the . . . wham!

Hayden bounced off a signpost, dropped her phone, and, reeling, lost her balance. Pain shot through her shoulder and she started to fall backwards, anticipating the smack of concrete on her butt, when strong arms caught her.

“Whoa, there.” A low, smoky voice spoke in her ear. She sagged against a big, hard body momentarily, her wits scattered. Then he carefully balanced her and held her upper arms to steady her. “You okay?” 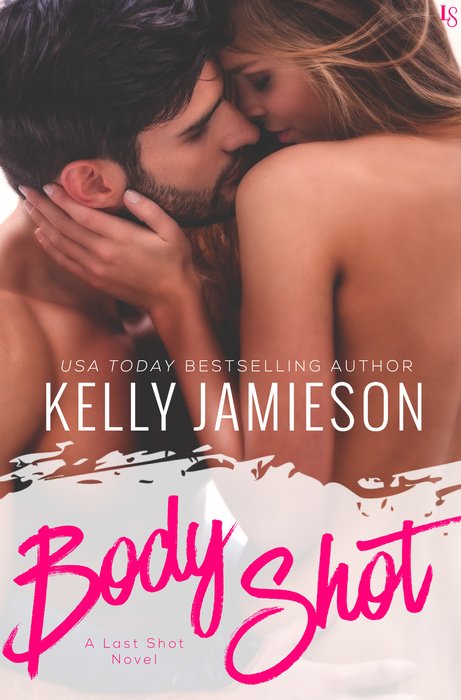