The so-bad-they’re-good alphas of hockey’s Chicago Aces are back in this emotionally charged novel of sex, love, and second chances from the bestselling author of Top Shelf and the Heller Brothers series.

Tanner Bennet hates weddings. They just remind him that he simply isn’t cut out for any kind of healthy, committed relationship—never has been, never will be. After getting rejected by the girl he thought was “the one” all those years ago, he made a huge mistake and married the wrong person. Now that the divorced heartbreaker has reluctantly agreed to be a groomsman for one of his NHL teammates, the last thing he expects is a chance at redemption with the one that got away.

After Marc Dupuis of the Chicago Aces hires wedding planner Katelyn Medford, she discovers that her big break comes with a twist: a reunion with her college sweetheart. The way she dumped Tanner still haunts her. Eight years—and three broken engagements—later, Katelyn knows she’ll never have that kind of innocent, wide-eyed passion again. Still, she and Tanner soon generate enough body heat to burn up the sheets. And even with Tanner’s career with the Aces up in the air, Katelyn’s wondering whether the time is right to let him in for real.

Praise for Back Check

“With Back Check, Kelly Jamieson has created a wonderful second-chance story. Her hockey series is one of the best out there, and I recommend giving it a try.”—Harlequin Junkie

“As soon as [Back Check] arrived for review, it went straight to the top of my reading pile! [Jamieson’s] characters are believable and the on-ice game action is very realistic.”—AngelNet Reviews

“I have to recommend this series if you’re into hockey romances, because it is a delight. I love the group of friends, their connections, the writing, the romance, the characters . . . everything! Give this a chance.”—My Tiny Obsessions

An excerpt from Back Check

Tanner tried to keep the horror from showing on his face. He guzzled some of his beer, then carefully set it down on the table in the Sin Bin, where he was sitting with three of his teammates and buddies. “Say what?”

Marc Dupuis, also known as Super Duper, captain of the Chicago Aces, grinned. “I want you to stand up with me as one of my groomsmen. Army’s my best man,” Duper referred to their teammate Duncan Armstrong, also sitting with them. “And I want you, Rupper, and Hughie to stand up with us.”

He’d rather be screwed sideways with a hockey stick, but obviously he couldn’t say that.

He’d been to way too many weddings in his life and not a single one of them had resulted in a lasting marriage. Including his own. Not that he was a superstitious guy—oh hell, who was he kidding, he was mega-superstitious—but it could almost make him think he was a jinx.

“But are you sure?” he asked cautiously. “Just gonna put this out there—any wedding I’ve ever been part of has ended up in divorce. Or . . .” Gah. He stopped short of saying “or death.” Because their teammate Max Hall had lost his young wife to cancer last year. Nobody wanted to be reminded of that, and Tanner sure as hell didn’t want Duper to think that his and Lovey’s marriage would end with Lovey dying of cancer.

Tanner shook off the negative thoughts. This was his friend and it really was an honor to be asked to be in the wedding party.

“What are you saying?” Duper narrowed his eyes and exchanged glances with Army. “You’re a curse?”

Tanner wasn’t the only superstitious one. Hockey players were notoriously superstitious. He forced a laugh. “Ha-ha. Nobody believes that, right? It’s just coincidence.”

“Hey, I’m just kidding around. It’ll be great. And you and Lovey are going to live happily ever after.”

“Please tell me I’ll be paired up with a hot bridesmaid.”

She was hot, but she was also Army’s girlfriend. “Well, crap.”

Tanner may have a reputation as a player, but he’d never screw around with a buddy’s woman. Ever.

“Lovey was all stressed about whether Amber should be the maid of honor, since Army’s the best man, but she couldn’t do that to her best friend from back home in Wisconsin, so . . .” Duper shrugged. “Whatever. Her friend Jillian is also a bridesmaid and her cousin Kendra.”

“Is her cousin hot?”

Yeah, he knew what that meant. “Jillian’s pretty.”

“This wedding isn’t being planned to hook you up with chicks,” Duper said, pointing at him.

“Well, I guess you can hook up with Jillian or Kendra, if you want.” Duper grimaced. “But don’t do it, like, during the ceremony or . . . Actually, it’s probably a bad idea overall. Lovey wants this wedding to be perfect.”

“Of course she does.” Tanner knew only too well how chicks got all invested in the wedding. His ex-wife had probably been the worst. Talk about bridezilla. He still felt his nuts shrivel every time he thought of how much money they’d spent on a goddamn horse-drawn carriage, the Plaza Hotel in New York, and the ten-thousand-dollar dress Presley wore exactly once.

Six months later they were divorced.

Ah, that was history. He never wanted to think about Presley again.

“Fine,” he said. “No wedding hookups for me. I’ll just be grateful it’s you and not me getting tied down. I plan to keep my options open and my freedom intact. Forever.”

Tanner laughed. “I’m not lonely. I have plenty of female company.”

Duper and Army exchanged a sad look, as if they were sorry for him. He scowled. “What?”

Duper shrugged. “Hookups are one thing. Life without love is kind of empty.”

Tanner stared at his teammates incredulously. “Seriously? You’re getting all sappy and philosophical? That’s what love does to you?”

Duper grinned. “One day it’ll happen. You’ll find someone and, bam, that’ll be it.”

“Not gonna happen.” He knew from experience what a bad idea it was to get emotionally attached to someone.
“Sure. Whatever.” Duper and Army exchanged another glance, then Duper left to hit the men’s room.

Army leaned over. “Heck,” he said. “I have no idea what I’m supposed to do as best man.”

“Like what? Christ. The only time I was in a wedding party was Hallsy’s wedding in Barbados. That was just a weeklong party on the beach. This is my best buddy and my sister getting married.” He scrubbed a hand over his face. “Still hard to believe.”

“It’ll be fine. Lovey’ll make sure you know what needs to be done.”

“She’s hired some hotshot wedding planner to organize things. She’ll probably be following us around with a whip and a bunch of lists. She’s going to make me feel like an idiot.”

Tanner grinned. Army wasn’t the most sophisticated guy in the world, despite living in Chicago for . . . a bunch of years. But he was a true, loyal friend and teammate.

“Hey, I’ve been to a few weddings. I got your back, man. Don’t worry.” He clapped a hand on Army’s shoulder.
“Like how many weddings?”

“Well, I wasn’t there the first time my parents got married—” He paused as Army barked out a laugh. “But they each got married three more times after they divorced each other.”

“I know, right? My dad made me best man every time. Then I was best man at Rich Koslowsky’s wedding.” One of his New York teammates. “And stood up with Hallsy. And then there was my own.” He rolled his eyes.

“That was before I knew you.”

“Yeah, I was still in New York then.”

Duper slid back onto a stool. “Still in New York when?”

“When I got married. Let’s not talk about that. You’re the happy groom-to-be now.”

Duper grinned. “Whatever. It’s still months away. Man, you have to plan these things far ahead.”

“The wedding is happening here, isn’t it? Not in Quebec?”

“Nah, it’s here. Although my mom would love to have the wedding at Église du Très-Saint-Sacrement.”

Duper grinned. “Our church.” He lifted a chin at Army. “Your mom wanted it to be back in Wisconsin. So the compromise is, we have it here. It’s not that far for your family. And I’ll fly my family in.”

“My little sister’s getting married.” Army shook his head. “I hope you know what you’re in for.”

Duper rolled his eyes. “I think I do, yeah.” 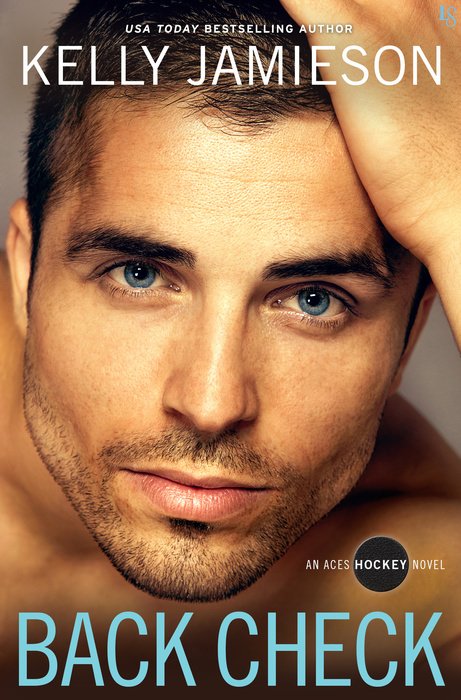