The Last of the Soviets

NEW YORK TIMES BESTSELLER • A symphonic oral history about the disintegration of the Soviet Union and the emergence of a new Russia, from Svetlana Alexievich, winner of the Nobel Prize in Literature

When the Swedish Academy awarded Svetlana Alexievich the Nobel Prize, it cited her for inventing “a new kind of literary genre,” describing her work as “a history of emotions—a history of the soul.” Alexievich’s distinctive documentary style, combining extended individual monologues with a collage of voices, records the stories of ordinary women and men who are rarely given the opportunity to speak, whose experiences are often lost in the official histories of the nation.

In Secondhand Time, Alexievich chronicles the demise of communism. Everyday Russian citizens recount the past thirty years, showing us what life was like during the fall of the Soviet Union and what it’s like to live in the new Russia left in its wake. Through interviews spanning 1991 to 2012, Alexievich takes us behind the propaganda and contrived media accounts, giving us a panoramic portrait of contemporary Russia and Russians who still carry memories of oppression, terror, famine, massacres—but also of pride in their country, hope for the future, and a belief that everyone was working and fighting together to bring about a utopia. Here is an account of life in the aftermath of an idea so powerful it once dominated a third of the world.

A magnificent tapestry of the sorrows and triumphs of the human spirit woven by a master, Secondhand Time tells the stories that together make up the true history of a nation. “Through the voices of those who confided in her,” The Nation writes, “Alexievich tells us about human nature, about our dreams, our choices, about good and evil—in a word, about ourselves.”

“The nonfiction volume that has done the most to deepen the emotional understanding of Russia during and after the collapse of the Soviet Union of late is Svetlana Alexievich’s oral history Secondhand Time.”—David Remnick, The New Yorker

An excerpt from Secondhand Time

ON IVANUSHKA THE FOOL AND THE MAGIC GOLDFISH

--What have I learned? I learned that the heroes of one era aren’t likely to be the heroes of the next. Except Ivanushka the Fool. And Emelya. The beloved heroes of Russian folklore. Our stories are all about good fortune and strokes of luck; divine intervention that makes everything fall right into our laps. Having it all without having to get up from your bed on the stove.1 The stove will cook the bliny, the magic goldfish will grant your every wish. I want this and I want that . . . I want the fair Tsarevna! I want to live in a different kingdom, where the rivers run with milk and their banks are heaped with jam . . . We’re dreamers, of course. Our souls strain and suffer, but not much gets done--there’s no strength left over after all that ardor. Nothing ever gets done. The mysterious Russian soul . . . Everyone wants to understand it. They read Dostoevsky: What’s behind that soul of theirs? Well, behind our soul there’s just more soul. We like to have a chat in the kitchen, read a book. “Reader” is our primary occupation. “Viewer.” All the while, we consider ourselves a special, exceptional people even though there are no grounds for this besides our oil and natural gas. On one hand, this is what stands in the way of progress; on the other hand, it provides something like meaning. Russia always seems to be on the verge of giving rise to something important, demonstrating something completely extraordinary to the world. The chosen people. The special Russian path. Our country is full of Oblomovs,2 lying around on their couches, awaiting miracles. There are no Stoltzes. The industrious, savvy Stoltzes are despised for chopping down the beloved birch grove, the cherry orchard. They build their factories, make money . . . They’re foreign to us . . .

--The Russian kitchen . . . The pitiful Khrushchyovka3 kitchenette, nine to twelve square meters (if you’re lucky!), and on the other side of a flimsy wall, the toilet. Your typical Soviet floorplan. Onions sprouting in old mayonnaise jars on the windowsill and a potted aloe for fighting colds. For us, the kitchen is not just where we cook, it’s a dining room, a guest room, an office, a soapbox. A space for group therapy sessions. In the nineteenth century, all of Russian culture was concentrated on aristocratic estates; in the twentieth century, it lived on in our kitchens. That’s where perestroika really took place. 1960s dissident life is the kitchen life. Thanks, Khrushchev! He’s the one who led us out of the communal apartments; under his rule, we got our own private kitchens where we could criticize the government and, most importantly, not be afraid, because in the kitchen you were always among friends. It’s where ideas were whipped up from scratch, fantastical projects concocted. We made jokes--it was a golden age for jokes! “A communist is someone who’s read Marx, an anticommunist is someone who’s understood him.” We grew up in kitchens, and our children did, too; they listened to Galich and Okudzhava along with us. We played Vysotsky,4 tuned in to illegal BBC broadcasts. We talked about everything: how shitty things were, the meaning of life, whether everyone could all be happy. I remember a funny story . . . We’d stayed up past midnight, and our daughter, she was twelve, had fallen asleep on the kitchen couch. We’d gotten into some heated argument, and suddenly she started yelling at us in her sleep: “Enough about politics! Again with your Sakharov, Solzhenitsyn, and Stalin!” [Laughs.]

Endlessly drinking tea. Coffee. Vodka. In the seventies, we had Cuban rum. Everyone was in love with Fidel! With the Cuban revolution. Che in his beret. A Hollywood star! We talked nonstop, afraid that they were listening in, thinking they must be listening. There’d always be someone who’d halt in mid-conversation and point to the ceiling light or the power outlet with a little grin, “Did you hear that, Comrade Lieutenant?” It felt a little dangerous, a little bit like a game. We got a certain satisfaction out of leading these double lives. A tiny handful of people resisted openly, but many more of us were “kitchen dissidents,” going about our daily lives with our fingers crossed behind our backs . . .

--Today, it’s shameful being poor and unathletic--it’s a sign that you’re not making it. I come from the generation of janitors and security guards. Getting a job like that was a form of internal emigration. You lived your life and didn’t pay any attention to what was going on around you, like it was all just the view out the window. My wife and I graduated from the Philosophy Faculty of St. Petersburg (back then, it was Leningrad) State University, then she got a job as a janitor, and I was a stoker in a boiler plant. You’d work one twenty-four-hour shift and then get two days off. Back then, an engineer made 130 rubles a month, while in the boiler room, I was getting 90, which is to say that if you were willing to give up 40 rubles a month, you could buy yourself absolute freedom. We read, we went through tons of books. We talked. We thought that we were coming up with new ideas. We dreamt of revolution, but we were scared we’d never live to see it. In reality, we were completely sheltered, we didn’t know a thing about what was actually going on in the world. We were like houseplants. We made everything up, and, as it later turned out, everything we thought we knew was nothing but figments of our imaginations: the West. Capitalism. The Russian people. We lived in a world of mirages. The Russia of our books and kitchens never existed. It was all in our heads.

With perestroika, everything came crashing down. Capitalism -descended . . . 90 rubles became 10 dollars. It wasn’t enough to live on anymore. We stepped out of our kitchens and onto the streets, where we soon discovered that we hadn’t had any ideas after all--that whole time, we’d just been talking. Completely new people appeared, these young guys in gold rings and magenta blazers. There were new rules: If you have money, you count--no money, you’re nothing. Who cares if you’ve read all of Hegel? “Humanities” started sounding like a disease. “All you people are capable of is carrying around a volume of Mandelstam.”5 Many unfamiliar horizons unfurled before us. The intelligentsia grew calamitously poor. On weekends, at the park by our house, Hare Krishnas would set up a mobile kitchen serving soup and something simple for a second course. The line of the dignified elderly was so long, just thinking about it is enough to give you a lump in your throat. Some of them hid their faces. By then, we’d had two children. We were literally starving. My wife and I became peddlers. We’d pick up four or six cases of ice cream at the factory and take them down to the market, to the most crowded spot. We had no refrigeration, so a few hours in, all the ice cream would be melting. At that point, we’d give it away to hungry kids. They were so happy! My wife did the selling. I’d deliver it, haul it--I was willing to do anything but actually make sales. It felt uncomfortable for a long time.

There was a time when I’d often reminisce about our kitchen days . . . There was so much love! What women! Those women hated the rich. You couldn’t buy them. Today, no one has time for feelings, they’re all out making money. The discovery of money hit us like an atom bomb . . .

Svetlana Alexievich was born in Ivano-Frankivsk, Ukraine, in 1948 and has spent most of her life in the Soviet Union and present-day Belarus, with prolonged periods of exile in Western Europe. Starting out as a journalist, she developed her own nonfiction genre, which gathers a chorus of voices to describe a specific historical moment. Her works include War’s Unwomanly Face (1985), Last Witnesses (1985), Zinky Boys (1990), Voices from Chernobyl (1997), and Secondhand Time (2013). She has won many international awards, including the 2015 Nobel Prize in Literature “for her polyphonic writings, a monument to suffering and courage in our time.”

The Last of the Soviets 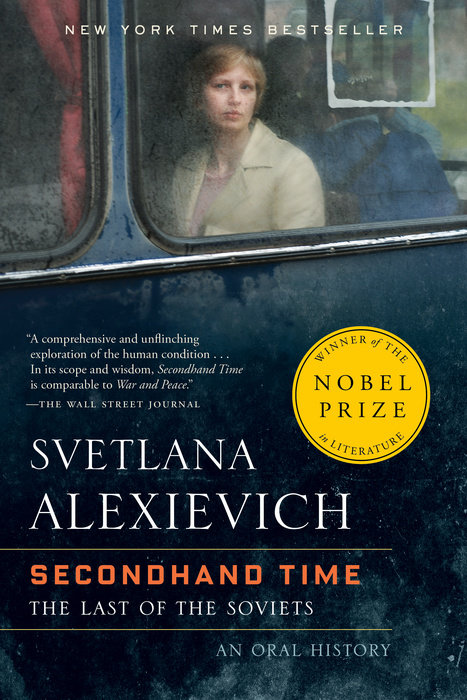