Shakespeare comes to Hampshire—and Pru Parke is cast into the role of cunning detective gardener once again.

Pru’s friends and neighbors are abuzz with the news of an acting troupe putting on an outdoor performance of A Midsummer Night’s Dream. And while many are eager to catch a glimpse of famed actor Ambrose Grant, Pru can’t wait to finally see the spectacular gardens of the private estate where the play will be performed. When the estate’s gardener abruptly quits—frustrated with actors trampling his beloved plants—Pru is called upon for her gardening expertise. She throws herself into creating magical woodland forest scenes, and is quickly drawn into the excitement of putting on a play, as she watches the drama on and off the stage. But the play’s suddenly no longer the thing, when one of the actors turns up murdered.

Pru’s husband, Detective Inspector Christopher Pearse, relies on Pru’s knowledge of all the players in this particular intrigue, and Pru finds herself using rehearsals to investigate. But playing the role of private eye could prove perilous for Pru, as she closes in on a murderer who won’t let anyone—least of all the gardener—keep him from stopping the show . . . dead.

The Potting Shed series: THE GARDEN PLOT | THE RED BOOK OF PRIMROSE HOUSE | BETWEEN A ROCK AND A HARD PLACE | THE SKELETON GARDEN | THE BLUEBONNET BETRAYAL | BEST-LAID PLANTS | MIDSUMMER MAYHEM

An excerpt from Midsummer Mayhem

“I can’t do it,” Pru whispered as she hid in the dark behind the door to the sitting room. Sounds of conversation and laughter drifted out. A drop of sweat trickled down her forehead, and she whisked it away. “I just can’t.”

“No one’s forcing you,” Christopher replied, his hand resting on the small of her back.

“It’s only that I thought I could,” she explained. “I thought it might be fun. But no, I’ll only make a mess of the whole thing and end up looking a fool.”

“You were perfect last night,” he said.

“Yes, but that was in bed and you were my only audience.”

Christopher peered through the narrow opening into the library and then looked back at her with a ghost of a smile. “Then, perhaps you should imagine they aren’t wearing any clothes, either.”
Pru laughed and then slapped a hand over her mouth. Her nerves, stretched taut, loosened ever so slightly.

No, but they formed an integral part of a convivial evening in England. And she had so wanted to participate.

“Everyone else did so well,” Pru complained. And they had—their guests had come up with poetry, funny stories, piano pieces, songs. Christopher had told his own version of an old English folktale about how badgers can protect against dark magic. “But the thought of getting up in front of that crowd—”

“There’s only nine of us out there.”

“Yes, and it’s that ninth one that’s the problem. How can I stand there and recite his own words to him?”

“They aren’t his words; they’re Will Shakespeare’s.”

“You know what I mean—the director.” She sighed. “I’m a gardener; my party piece should be planting a tree. Why did I think performing lines from A Midsummer Night’s Dream would be a good idea?”

“Then don’t do it,” Christopher said and kissed her temple. “I’ll go in and offer brandy. They’ll never notice.”

He moved to go, but Pru caught his arm.

“No, how silly I am.” She cleared her throat, took out her clip, combed it through her brown hair, and reclipped.

Pru stood in front of the unlit fireplace and felt a slight June breeze drift in from the open French doors—a delightful summer evening in Hampshire, but it did nothing to cool her off. She fidgeted. Christopher locked his intense brown eyes on her to offer encouragement. Evelyn and her husband, Albert; Pru’s brother, Simon, and his wife, Polly; and Reverend Bernadette all smiled up at her. The others—actor Ambrose Grant, stage manager Penelope Farthing, and director Max Stirling watched and waited. They had been delightful dinner companions—she must remember that.

Swallowing hard and praying she wouldn’t have to shout “Line!” Pru inhaled deeply and began.
“Over hill, over dale,
Thorough bush, thorough brier,
Over park, over pale,
Thorough flood, thorough fire—
I do wander everywhere
Swifter than the moon’s sphere,
And I serve the Fairy Queen,
To dew her orbs upon the green.
The cowslips tall her pensioners be;
In their gold coats spots you see—
Those be rubies, fairy favours;
In those freckles live their savours.
I must go seek some dewdrops here,
And hang a pearl in every cowslip’s ear.
Farewell, thou lob of spirits; I’ll be gone.

Our Queen and all her elves come here anon.”

“Brava!” were the shouts and cheers, and Pru couldn’t sit down quickly enough. Where is Christopher with that brandy? A large glass appeared in front of her, and she seized it, giving him a grateful smile.

“Oh now,” Pru said, mortified at the attention. “I believe I’d better stick to supplying you with plants for your production.”

“You are more than supplier.” Max toasted her with his glass. “You are an artist, a visionary in flora, however ephemeral your creation may be. Of course, we in the theater are accustomed to the temporary, the fleeting—isn’t that true, Ambrose?”

“Indeed. It’s why we are in constant search of our next role.”

The Ambrose Grant fan club—Polly, Evelyn, and Bernadette—tittered appreciatively. He did have that way about him—the power to charm the knickers off women of a certain age. Figuratively speaking, of course. 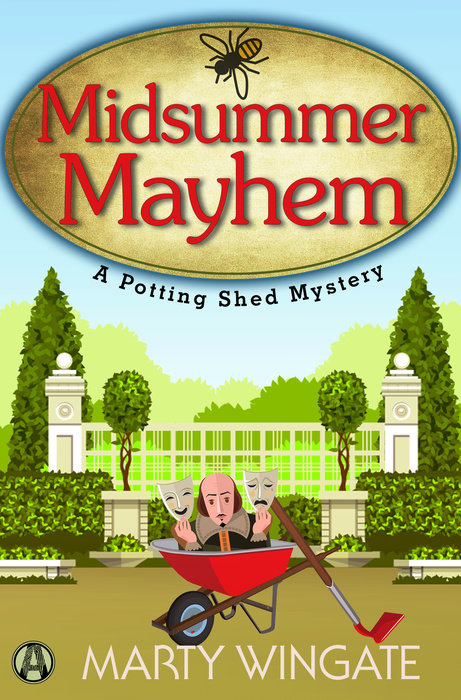