NEW YORK TIMES BESTSELLER • From the author of American Wife and Eligible . . . He proposed. She said no. And it changed her life forever.

“Deviously clever . . . Sittenfeld’s Hillary is both a player in the Game of Thrones and a romance novel heroine. She’s a brilliant badass who has found her voice and knows how to use it. She’s whoever she wants to be.”—O: The Oprah Magazine

In 1971, Hillary Rodham is a young woman full of promise: Life magazine has covered her Wellesley commencement speech, she’s attending Yale Law School, and she’s on the forefront of student activism and the women’s rights movement. And then she meets Bill Clinton. A handsome, charismatic southerner and fellow law student, Bill is already planning his political career. In each other, the two find a profound intellectual, emotional, and physical connection that neither has previously experienced.

In the real world, Hillary followed Bill back to Arkansas, and he proposed several times; although she said no more than once, as we all know, she eventually accepted and became Hillary Clinton.

But in Curtis Sittenfeld’s powerfully imagined tour-de-force of fiction, Hillary takes a different road. Feeling doubt about the prospective marriage, she endures their devastating breakup and leaves Arkansas. Over the next four decades, she blazes her own trail—one that unfolds in public as well as in private, that involves crossing paths again (and again) with Bill Clinton, that raises questions about the tradeoffs all of us must make in building a life.

Brilliantly weaving a riveting fictional tale into actual historical events, Curtis Sittenfeld delivers an uncannily astute and witty story for our times. In exploring the loneliness, moral ambivalence, and iron determination that characterize the quest for political power, as well as both the exhilaration and painful compromises demanded of female ambition in a world still run mostly by men, Rodham is a singular and unforgettable novel.

An excerpt from Rodham

The first time I saw him, I thought he looked like a lion. He was six foot two, though I knew then only that he was tall. And in fact, his height seemed even greater because he was big-­tall, not skinny-­tall. He had broad shoulders and a large head and his hair was several inches longer than it would be later, which drew attention to its coppery color; his beard was the same shade. I suppose I thought he looked like a handsome lion, but even from a distance, he seemed full of himself in a way that canceled out his handsomeness. He seemed like a person who took up more than his share of oxygen.

This sighting took place in Yale Law School’s student lounge, in the fall of 1970—my second year of law school and his first. I was with my friend Nick, and Bill was speaking in his loud, husky, Southern-­accented voice to a group of five or six other students. With great enthusiasm, he declared, “And not only that, we grow the biggest watermelons in the world!”

Nick and I looked at each other and began laughing. “Who is that?” I whispered.

“Bill Clinton,” Nick whispered back. “He’s from Arkansas, and that’s all he ever talks about.” The next thing Nick told me was actually, at Yale Law School, less notable than Bill’s being from Arkansas. “He was a Rhodes scholar.”

After I’d been accepted at both Harvard and Yale, I’d decided where to go using a rule I’d established for myself at such an early age—probably in third or fourth grade—that I had trouble remembering a time when I hadn’t abided by it. Though I’d never discussed it with anyone, I thought of it as the Rule of Two: If I was unsure of a course of action but could think of two reasons for it, I’d do it. If I could think of two reasons against it, I wouldn’t. Situations arose, of course, where there were two or more reasons both for and against something, but they didn’t arise that frequently.

Should I, as a high school freshman, take Latin? Because I’d heard the teacher was outstanding and because it would help me with the SATs—yes.

Should I attend my church youth group’s retreat at Gebhard Woods State Park if it meant missing my friend Betty’s sweet sixteen party? Because the date of the retreat had been announced first and because a church event was inherently more moral than a party—yes.

The reasons I’d ultimately chosen Yale were: (1) its commitment to public service, and (2) when I’d attended a party at Harvard Law after my acceptance there, a professor had declared that Harvard didn’t need more women. As with Yale, the number of female law students at Harvard was then at about 10 percent, and I was slightly tempted to enroll just to spite this professor. But only slightly.

One evening in March 1971, shortly after spring break, I was studying in the law library, which was in a striking Gothic building. The library occupied a long room filled with carrels. Above the bookshelves were large, arched stained-glass windows, and bronze chandeliers hung from the wood ceiling.

I’d been sitting at a carrel for ninety minutes, and every time I looked up, I made eye contact with Bill Clinton—the lion. He was about twenty feet away, perched on a desk and talking to a man I didn’t know. I wondered if Bill was confusing me with someone else. Then again, since only twenty-­seven students my year were women, it shouldn’t have been that difficult to keep us straight.

I stood, approached him, and said, “I noticed you looking at me. Is there something you need?” I extended my hand. “I’m Hillary Rodham.”

He smiled slowly and broadly, and in his warm, husky, Southern voice, he said, “I know who you are.” (Oh, Bill Clinton’s smile! More than forty-­five years have passed since that night in the library, and at times it’s crossed my mind that his smile may have ruined my life.) He added, “You’re the one who told off Professor Geaney on Ladies’ Day.”

This—Ladies’ Day—was a ritual observed by some professors who called on female students to speak just once a semester, on a designated day. But Professor Geaney, who taught Corporate Taxation, which was an upper level class Bill wasn’t in, took the tradition further than most: Every Valentine’s Day, the professor started class by announcing that it was Ladies’ Day and asking all the virgins to assemble in the front of the room. When he’d done it a few weeks before, I along with the other two women in the section stood but remained at our seats, as we’d planned to do in advance, and I spoke on our behalf. I said, “This is an offensive custom that has no place in an academic setting. The female students present should be treated as full members of the law school community, with the same rights to participation in this class as the male students.”

When I’d finished, I’d felt some of the defiant satisfaction I had at my Wellesley graduation, and the feeling hadn’t been diminished when Professor Geaney said, “Fine then, Miss Rodham. You ladies may stay where you are, but since you seem particularly keen to share your viewpoints today, I’ll let you begin our discussion by summarizing Gregory v. Helvering.”

In the law library, to Bill Clinton, I said, “Yes, that was me.”

Bill rose then from the desk, all six feet two of him, with his coppery hair and beard, and took my still-­extended hand (I was five-five). He said, “It’s a pleasure to officially meet you. I’m Bill.”

“Are you interested in working at the legal aid clinic?” I asked. For the last eighteen months, I’d volunteered at the New Haven Legal Services office.

He seemed amused, though I didn’t see why. Our hands were no longer moving but still clasped—his hand was enormous—as he said, “I might be. Would you like to get a cup of coffee sometime and we could discuss it?”

As I extracted my hand, I said, “If you’re considering the clinic for this summer, you should apply as soon as possible. The slots will definitely fill up.”

“No, I’ll be organizing for ­­McGovern down in Florida. But what about coffee?”

Was he asking me out? In a matter of seconds, I considered then dismissed the possibility. There were, as it happened, two reasons why. The first was that Bill Clinton had a palpably impatient and acquisitive energy, and while, at Yale Law School, this energy wasn’t unique, his was more extreme than most. He did, obviously, want something from me, but it seemed unfathomable that the something was romantic. And the reason it seemed unfathomable wasn’t that men weren’t interested in me; they sometimes were, but the men who were interested in me were never outrageously charismatic and handsome.

Therefore I wasn’t playing hard to get, I wasn’t being coy, as I said, “I’m busy until the weekend, but I have time to meet you on Saturday afternoon.”

Curtis Sittenfeld is the New York Times bestselling author of the novels Prep, The Man of My Dreams, American Wife, Sisterland, and Eligible, and the story collection You Think It, I’ll Say It, which have been translated into thirty languages. Her short stories have appeared in The New Yorker, The Washington Post Magazine, Esquire, and The Best American Short Stories, of which she was the 2020 guest editor. Her nonfiction has appeared in The New York Times, The Atlantic, Time, and Vanity Fair, and on public radio’s This American Life. 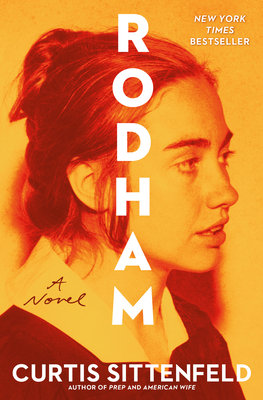