“A documentary filmmaker and daughter of the late, great New York Times columnist David Carr celebrates and wrestles with her father’s legacy in a raw, redemptive memoir.”—O: The Oprah Magazine

“A breathtaking read . . . a testimony equal parts love and candor. David would have had it no other way.”—Ta-Nehisi Coates, bestselling author of Between the World and Me

Dad: What will set you apart is not talent but will and a certain kind of humility. A willingness to let the world show you things that you play back as you grow as an artist. Talent is cheap.
Me: OK I will ponder these things. I am a Carr.
Dad: That should matter quite a bit, actually not the name but the guts of what that name means.

A celebrated journalist, bestselling author (The Night of the Gun), and recovering addict, David Carr was in the prime of his career when he suffered a fatal collapse in the newsroom of The New York Times in 2015. Shattered by his death, his daughter Erin Lee Carr, at age twenty-seven an up-and-coming documentary filmmaker, began combing through the entirety of their shared correspondence—1,936 items in total—in search of comfort and support.

What started as an exercise in grief quickly grew into an active investigation: Did her father’s writings contain the answers to the question of how to move forward in life and work without her biggest champion by her side? How could she fill the space left behind by a man who had come to embody journalistic integrity, rigor, and hard reporting, whose mentorship meant everything not just to her but to the many who served alongside him?

All That You Leave Behind is a poignant coming-of-age story that offers a raw and honest glimpse into the multilayered relationship between a daughter and a father. Through this lens, Erin comes to understand her own workplace missteps, existential crises, and relationship fails. While daughter and father bond over their mutual addictions and challenges with sobriety, it is their powerful sense of work and family that comes to ultimately define them.

This unique combination of Erin Lee Carr’s earnest prose and her father’s meaningful words offers a compelling read that shows us what it means to be vulnerable and lost, supported and found. It is a window into love, with all of its fierceness and frustrations.

“Thank you, Erin, for this beautiful book.  Now I am going to steal all of your father’s remarkable advice and tell my kids I thought of it.”—Judd Apatow

An excerpt from All That You Leave Behind

When I think back to my early childhood home in Minneapolis, my brain conjures up a dim outline of a blue house on Pillsbury Avenue. While it is hard to remember the exact details of the house, the memories of its inhabitants come quite easily. I can picture my hands on the furniture, always trying to spread my mess out onto our sparse belongings. I see my dad putting one of our purple tutus on his head and declaring to no one in particular, “I am TUTU MONSTER,” as he scoops my sister and me up in his arms while we shriek and try to scramble out of his grasp, giggling the whole time. He had a gift for creating worlds.

Our parents shape and create our reality. For a long time we have no sense outside of their worldview.

A while back I spent some serious time digitizing hundreds of decades-old photos tucked away in ancient red photo albums so that I could pull them up in a moment’s notice. The images tell a familiar tale. Two little girls encased in baby buckets, looking up at the bad hair and fashions of the 1980s. Sometimes we are smiling in the photos. More often, though, we are not. We were born without so much as a wisp of hair, so naturally my grandma JoJo took to scotch-taping bows on our heads. She needed people to know that we were baby girls, not boys.

My mother is absent from these photos. It’s just a flurry of aunts and uncles and Mountain Dew cans. My arms are chubby, and I am often reaching out for more. There is no baby book that recounts my first words or steps, but when I asked my dad in my teendom what my first utterance was, you better bet he said DaDa.

Meagan is so tiny in these early images, her body so small it looks like she could evaporate. Our nicknames mimic our stature; as luck would have it, I am known as Beefaroni and she, Noodles. I am often captured with a bottle in hand, and in a couple of photos, trying to grab the bottle from Meagan’s hands.

There’s one photo of my dad in these albums that I studied carefully. It’s not like the others. He is in some sort of rec room, and he is standing up at a podium. He looks like he is clocking in around three hundred pounds, and he has a beard. Not exactly in fighting shape. Other men fill the room. He looks focused and nervous, photographed in midsentence.

I called Uncle Joe. He is warm and charismatic with a bald head and small circular glasses. I’d been remiss in calling. Life had gotten busy.

“Do you remember this photo?” I asked, after describing it to him. “What was he like then?”

Joe paused to think about it. I could tell that he was placating me. This was the second time in ten years he’d had to revisit a past that was very dark for his entire family. My dad spent some serious time excavating the facts of his life for his own memoir, The Night of the Gun. “Well, your dad was a mystery to us. He tried his hand at treatment on numerous occasions, and it just never seemed to stick. We knew—and I think he knew—that this time had to be different. Must have been at a meeting.”

We were the stakes. These little babies needed a parent, and my mother was not going to magically reappear from Texas or Mexico or wherever she was at that time. We needed him. “But didn’t that intensify the pressure?” I asked.

As Meagan and I age in the photos, our hair begins to grow and we go from looking like little old men to looking like little girls. Starting around age four, a soft white-and-pink checkered baby blanket starts appearing next to me, as if it were surgically attached. As I sought out other archival material from this time, I came across his column in the Family Times, a local paper that had given him some space to muse about life as a single dad. The column was aptly titled “Because I Said So.” In one installment, he told of how he’d turned away for a second to look for my ever-quiet sister, and before he knew it I had gotten myself into our junker of a car and started backing out of the driveway. The minor heart attacks that surround the life of a young parent astound me.

In those early days in Minnesota we were poor. We needed government assistance just to get by—something I have no shame about and am frankly grateful existed at the time. You can tell our circumstances from the backgrounds in the photos, but you definitely wouldn’t know it to look at Meagan or me. Grandma JoJo was a hawk at rummage sales and would find matching outfits (plus bonnets, no less) for us to wear for family photo ops. My dad, on the other hand, looks pretty ragged. I can see in his face that the financial fear was alive and well. He, alone, was responsible for these two little beings. Sure, his family could help here and there, but they needed their money to stay in their own pockets.

In the photos, he’s always looking at us—his daughters. He isn’t mugging for the camera, like he did in his early party-boy days. Instead, he is watchful, careful, and looks exhausted as hell. Someone caught him cracking a smile in one photo. We are at our grandparents’ and Meagan and I are standing on top of the picnic table. There are garbage bags that hold something bulky underneath. We are told to open the bag and OH MY GOD we each have our very own tricycle to ride! The next photo is me on my trike, in my Easter bonnet, grinning from ear to ear. Dad watches us with parental glee but also relief: Good, something to keep them busy.

Erin Lee Carr is a director, producer, and writer based in New York City. Named one of the “30 Under 30” most influential people in media by Forbes, Carr most recently directed At the Heart of Gold, about the USA Gymnastics scandal, and I Love You: Now Die, about the Michelle Carter murder-by-texting trial, both for HBO. She also directed “Drug Short,” an episode of Netflix’s critically acclaimed series Dirty Money. She lives in New York City, where she enjoys petting dogs on the street. 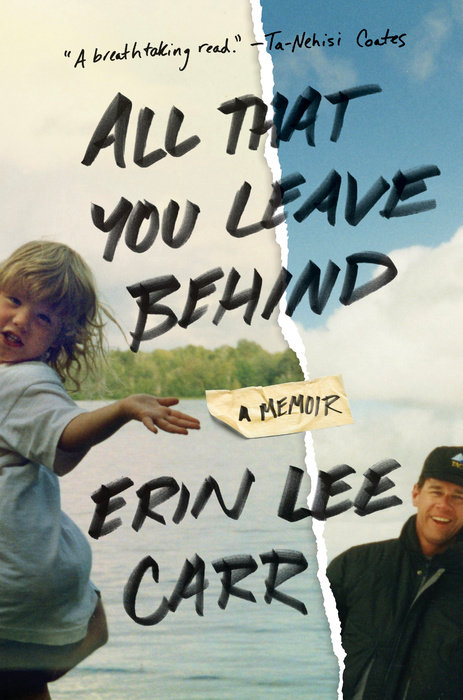