Destined to go blind, a rake sets his sights on the toast of society, lighting a fire of passion that scorches the night, in this captivating novel from USA Today bestselling author Bronwen Evans.

Stephen Hornsby, the Marquess of Clevedon, has one goal: to see every exquisite thing he can before he goes blind. His greatest joy, watching a woman shuddering in the throes of passion, will be gone. But before the darkness descends, he is determined to seduce a magnificent widow, Lady Penelope Fisherton. Unfortunately, his rakish reputation has preceded him; Lady Penelope spurns his advances. Being a man who relishes a challenge, however, her reluctance adds only luster to his desire for the last beautiful sight he’ll ever see.

Considered the belle of London society, Lady Penelope was married to a scoundrel who cared for no one but himself. Now that she’s free, she wants nothing to do with love, passion, or desire—emotions that abandoned her with a cruel husband. So why does her body react when Stephen smiles? As much as she’d like to avoid the rogue, her brother-in-law wants her fortune, and he’ll kill to get it. Stephen is willing to help, but he’ll take only one thing in return: Her. In his bed.

Praise for Drawn to the Marquess

“Beautifully done! Drawn to the Marquess is a moving, touching romance of two people who prove to be exactly what each other needs at exactly the right time. I fell in love with Penelope and Stephen!”—New York Times bestselling author Jennifer Ashley

“Drawn to the Marquess will captivate and seduce you. Bronwen Evans is a gem in Regency romance.”—Internationally bestselling author Tracy Goodwin

An excerpt from Drawn to the Marquess

There he was. Penelope’s mind raced at the audacity of her plan.

Stephen Hornsby, the Marquess of Clevedon, looked as handsome as the devil. Her information source had not exaggerated.

The words of Lady Diana, Clevedon’s latest mistress, echoed in her head. He is a sin to be indulged but a man never to bestow your heart upon.

Well, she wasn’t looking to bestow her heart on any man ever again. She just needed him to help her defeat Lord Rotham.

He was not wearing a hat. Apparently, he never did, and even as he moved into the auction gallery, his dark hair looked as if it was tousled from the wind outside, immediately making her think that perhaps he’d only recently gotten out of bed.

Bed. She clapped gloved hands to her warm cheeks. “Bed” was most likely something a woman automatically associated with such a devastatingly handsome man. Or at least how to get him into one.

His midnight blue jacket and high boots polished so they gleamed screamed wealth. He sauntered, yes, sauntered, toward his seat near the middle of the room. A seat only a few rows behind hers. Every move he made was calculated to show the type of man he was, rich, powerful, handsome, and self-assured. Even the sunlight from the main window at the front of the gallery, playing over his godlike features, seemed to want to be his lover, and the other women present were staring at him and drooling like teething babies.

He was the most beautiful man she had ever seen. And to her dismay her body stirred. Stirred with feelings she thought she’d long killed beneath her self-disgust.

For the past two months she’d been learning all she could about this man, but seeing him in person was infinitely different than she imagined. Penelope imagined that she would be immune to his physical attributes because he was a known rake. But even she was not unmoved. Just looking at him sent waves of heat along every nerve ending. Perhaps this was not such a good idea.

Penelope turned back to face the front of the auction room using the auction list to fan her face. She let past memories of the havoc a rake had created feed her resolve. Clevedon was merely a means to an end. A way to protect those she cared about.

She heard Mr. Sotheby greet him, and Lord Clevedon’s reply. The sound of his deep, gravelly voice sent a shiver of foreboding over her skin. It lured her to the point where she almost turned around to stare at him again.

This was not her plan.

It was not her plan to fall under his spell.

A bilious sensation churned in Penelope’s stomach. She’d learned his lordship wanted a painting coming up for sale in this auction. She had to buy the painting he wanted or else she would have nothing to barter with.

Unfortunately, Lord Clevedon was extremely wealthy. He was a man who would not need money, so why else would he help her? The painting was the key.

She would win it.

She’d brought six hundred pounds with her. More than enough for a painting valued at only one hundred pounds. She hugged her reticule tightly. Being the Duke of Sandringham’s sister would help if she needed credit, but paying too much for a landscape from a relatively unknown painter would arouse curiosity. As would buying a painting Lord Clevedon wanted. The last thing she needed right now was the gossips announcing to everyone that she was in town and engaging in a bidding war with the Marquess of Clevedon.

Just then Lady Charlotte retook her seat. Her friend was there for moral support. It was Charlotte who, because she always came to town for the season when Penelope didn’t, had ascertained the identity of Clevedon’s current mistress and allowed them to learn as much as possible about the rake. Luckily for them Lord Clevedon had recently ended his liaison with Lady Diana, and she was so heartbroken that she simply wanted to talk about the man all day. That is how Penelope learned about his obsession with the Wilson landscape.

“I see Clevedon’s here. I perfectly understand how Lady Diana ended up in the man’s bed. I must admit I’m very tempted myself.” At Penelope’s alarmed look at her widowed friend, Charlotte added, “Of course not until he has helped you.”

“You may play with him all you like as soon as I’m finished with him.”

Penelope saw Charlotte take a second look. “I shall certainly look forward to that.” She giggled. “And not simply because with his help you’ll be safe. By the way, no woman is safe with that man. He’d tempt a nun.”

“Stop looking at him. I don’t want to be noticed.”

“When will you learn, darling, that a little flirtation gets women like us almost anything we want. You could have him twisted around your little finger with a smile.”

Penelope pinched the bridge of her nose and wished she were at home as a headache began to pound behind her eyes.

“If this plan doesn’t work,” her friend continued, “then you could always offer yourself.”

Her head jerked up and her jaw tightened. “No. I will have to find another way. I will never allow a man power over me again.” 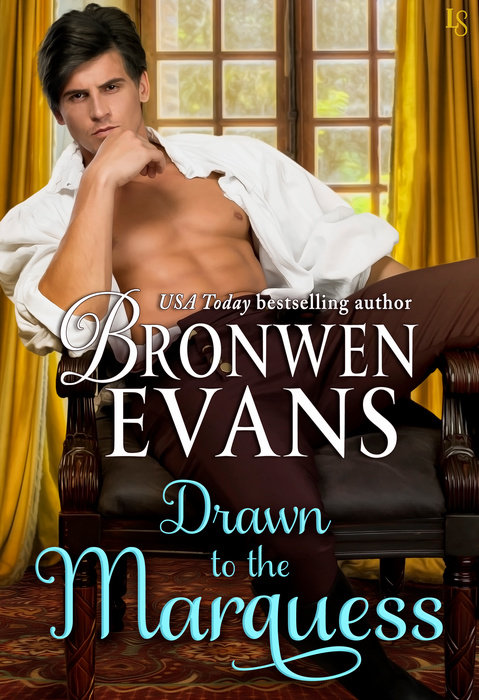