Is the Dragons’ new wide receiver: A) a fallen NFL star looking for a comeback, B) the sexy player your boss wants you to write an exposé on, or C) the former love of your life?

For Milwaukee Dragons beat reporter Natalie Griffith, he’s clearly D) all of the above. Three years ago, Natalie’s bombshell report on her ex-boyfriend’s off-the-field scandals landed her the job she loves, but she still feels guilty about destroying his career. Now Quinn Lowry’s back, and he’s taking over her locker room, flashing his charming smile and reminding her exactly how hot they were together.

After two years out of the league, Quinn is sober and on the field again. He’s worked his ass off and he’s not going to blow his second chance, not even for the woman who broke his heart—twice. Having Natalie around is the last thing Quinn needs while he’s trying to prove he deserves to stay on the team.

Maybe one final night together will give them both some much-needed closure. But with Natalie’s boss pressuring her for another headline-grabbing scoop, can she admit to herself that she’s falling for Quinn all over again?

Don’t miss any of Liz Lincoln’s mouthwatering Milwaukee Dragons novels, which can be read together or separately:
ON THE LINE • SWAGGER • HOME FIELD ADVANTAGE

An excerpt from Home Field Advantage

Even in a locker room full of professional athletes with bodies sculpted to perfection, only one word could accurately describe Quinn Lowry's shirtless torso: lickable. It didn't help that only a towel separated him from total nakedness. It also didn't help that at one point, years ago, Natalie Griffith had spent considerable amounts of time with his body. Totally naked. And her body totally naked.

It really didn't help that she had two hours to find and write a story different from the one every other reporter would be writing and she couldn't force her mind past lickable.

"I felt really good," Quinn said in response to a question posed by another reporter. Natalie had been too busy remembering not to drool to catch who asked it. "The other wide receivers and I are really starting to click. Find our places."

"What about you and Matt Baxter? How are you doing with him?"

"Matt's great. We're even roommates for training camp." He grinned at the reporter who'd asked the question, that heart-stopping, don't-you-just-want-to-nibble-on-these-lips grin. Or, considering she was the only woman in the group, maybe she was the only one who got that specific message from his grin.

She thought she'd mentally prepared herself to see him. But her reaction to him was clear evidence she was nowhere near as cool with being around him as she'd told herself. And if she let herself examine her reaction to him beyond the purely physical, she'd probably fall apart. Once upon a time, she'd thought she'd spend her life with Quinn. He was the one who got away, but seeing him now, after so many years, it finally sank in. He was a stranger.

"He's the kind of guy it's hard not to like. And I gotta say, after playing on two teams in this division, I'm pretty glad to have him on my side of the ball for a change. The pressure to keep up with him is intense."

A brief silence fell over the group, punctuated by the voices in the room, laughter, the hiss of the showers in the next room. Natalie watched her colleagues scribble on notepads or type on phones. She was the only one not recording Quinn's answers. She didn't want to write the exact same story as every other news outlet. But what else was there to say? She couldn't write a 900-word ode to his smooth, tanned, chiseled physique.

"And what about the off-the-field pressures? What's your plan for dealing with those?"

Roy Burgess' question landed with a thud, silence falling over their corner of the locker room. Natalie's heart skipped a beat as her eyes flew to Quinn's face. Under the scruff covering his jaw, she saw a tendon jump. That, at least, hadn't changed in the eight years since she last saw him.

Something flashed in his hazel eyes but was gone as quickly as it appeared. "I'm in a new city, learning a new system, getting to know new teammates. I've got a good support system set up. And I'm an old man now. I don't have the time or energy for anything but football." He flashed the charming smile that had gotten him into as much trouble as it had gotten him out of. "If you'll excuse me, I'm starting to offend myself with how much I stink."

He shouldered his way through the small crowd and sauntered toward the showers. Natalie forced herself not to watch him walk away. His back was inevitably as lickable as the rest of him; it wouldn't get her any closer to having a clue what to write in her story about the Milwaukee Dragons' first training camp practice.

Letting instinct guide her, she wandered over to where freshly showered tight end Marcus James was pulling on a T-shirt. "How's the knee feeling?" she asked. He'd spent the previous season on injured reserve due to a torn ACL.

The attractive black man grinned, his teeth white against his dark skin. "Hey, Natalie. Nice story last week about Bree and Celia's CTE research. That might get you an award nomination."

She tilted her head, accepting the compliment the way her boss and mentor had been drilling into her. It was still awkward to accept praise without downplaying her deservedness, but under Ellen's guidance, she was getting better at it. "Thank you. I could say the same about your play today. You poised for another great season?"

"You better believe it. Can't wait to get out there and make some magic. I intend to earn more than a nomination for comeback player of the year. I'm winning that award."

This was it, the angle she would take today. Every other outlet could cover the story about Quinn Lowry's triumphant return to football; maybe she'd puke up 500 words about it, just to get her employer, Sports and Leisure News Today, aka SLNT, the coveted clicks. But her main story would be about Marcus James' own return to the turf. Dragons fans looking for news on Lowry would have a dozen choices of which site to read, but hers would be the only story on James. For fans wanting predictions on the season, and fantasy football devotees plotting their drafts, news on James would be just as interesting.

She chatted with Marcus for another ten minutes, during which not a single other reporter wandered over. They'd either left or were still staked out at Quinn's locker, waiting for him to return from his shower.

Wet. Naked. And full of all those muscles.

Damn. He'd been in great shape in college, but damn. Now, he defined ripped. Cut.

Natalie Griffith was in his locker room. Because Quinn didn't already feel like he couldn't breathe under the microscope of scrutiny aimed at him. No. That wasn't enough. He had to show up and face the woman he'd once loved. The woman who'd broken his heart. The woman who'd done her damndest to flush his career down the toilet.

Quinn gritted his way through a handful of the usual questions about how he was adjusting to life back on the field. He'd been out for two seasons, so it was to be expected.

Then the pinched-faced guy from AllAccessDragons.com threw him the elephant they all knew was in the room with them.

"And what about the off-the-field pressures. What's your plan for dealing with those?"

Quinn should have been prepared. Hell, when he wasn't pep-talking himself about seeing Natalie again after eight years, he'd spent two days giving himself pep talks so he'd be ready to handle this exact question. But he still caught it as well as he would have the actual proverbial elephant. What had his manager told him to say?

He could almost hear Pedro's nasal Chicago-accented voice in his head. Tell them you're in a new city, learning a new system, getting to know new teammates. You've got a good support system set up. And you're an old man now. You don't have the time or energy for anything but football.

Quinn opened his mouth and Pedro's words came out. He almost managed to say it without breaking one of his back teeth from clenching his jaw so hard. He even pulled out the grin he knew was his ticket to getting back in the good graces of the media. He had to force himself not to look at Natalie as he did it. She'd loved his smile. Hell, lots of women loved his smile. He didn't have an ego about it; plenty of women told him.

Natalie had liked to poke her tongue into his dimple when they had sex.

"If you'll excuse me, I'm starting to offend myself with how much I stink." He purposely avoided her side of the little crowd around him as he worked his way through and headed for the showers.

Liz Lincoln has been concocting stories as long as she can remember, and from the beginning they involved two people falling in love. When she’s not writing, she spends her time rooting for the UW Badgers and the Green Bay Packers (or yearning for the return of football season), cross-stitching sassy sayings or nerdy characters (Wonder Woman is her favorite), and drinking too much Diet Coke. She lives in Milwaukee, Wisconsin, with her husband, two kids, two cats, and a turtle. 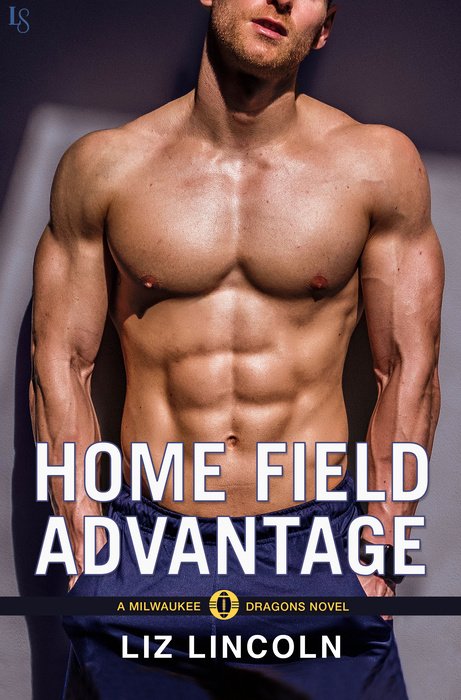