Creators, Writers, and Comics Legends on the Impact of Marvel Studios' Black Panther

Join creators, writers, and comics legends as they discuss the impact of Marvel Studios’ Black Panther in this gorgeously illustrated collection of essays

Marvel Studios’ Black Panther has become more than just a movie—it has shaped conversations about art, culture, science fiction, representation, justice, fashion, comics, creativity, and so much more. Celebrate the legacy of the film with this collection of all-new personal essays and reflections that shed light on its monumental impact, including firsthand stories from artists involved in the film, cultural analysis from journalists and academics, and thoughtful insights from writers and comics legends. Each contributor brings their unique expertise and experience to explore the film’s genesis and significance from every angle. Complete with gorgeous original illustrations, Dreams of Wakanda brings together a wide array of diverse and multifaceted perspectives that exemplify the many ways the film has impacted cinema, culture, and society.

In this collection:
• Costume designer Ruth E. Carter takes us through her Afrofuturistic designs.
• Writer Tre Johnson discusses the metaphoric qualities of vibranium.
• Author Yona Harvey reflects on how the film has resonated with audiences across the African diaspora.
• Journalist Hannah Giorgis uncovers how the soundtrack fits into sonic portraits of Blackness.

To celebrate the launch of this book and Black Panther’s global impact, Disney and Penguin Random House are donating books to First Book and Books for Africa respectively. Disney is donating books valued at approximately $1,000,000 to support First Book, a leading nonprofit that serves children in underserved communities and addresses the needs of the whole child by supporting their education, basic needs, and wellness—all of which are essential to educational equity. Penguin Random House (PRH) is donating PRH titles valued at approximately $100,000 to Books For Africa. Books For Africa was founded upon a singular mission: to end the book famine in Africa. BFA collects, sorts, and ships books, computers, tablets, and library enhancement materials to every country in Africa.

An excerpt from Marvel Studios' Black Panther: Dreams of Wakanda

2016 was a weird year for me. I’d sold my debut young-adult novel in 2015, but it wasn’t scheduled to be published until 2017, and though I was working on new stuff, it was with great trepidation—I very deliberately wrote stories about Black kids, and at that point, they weren’t exactly in high demand.

Honestly, prior to 2018, when the first Marvel Studios’ Black Panther film was released, trepidation was a thing in the hearts of many Black people attempting to forge or maintain careers in storytelling and entertainment spaces—this is a book of essays about how said film impacted a variety of lives, and you are reading the foreword, after all.

As for my story: I’d been an avid reader as a child, but for reasons I couldn’t articulate back then, the practice had lost its savor as I tumbled headlong into adolescence. It would be years before I’d figure out the root of my sudden disdain for books. Once I did, I realized that all of the ones I was told I had to read either had soundly awful depictions of Black people or no Black people at all.
We gravely underestimate the damage this does to the developing identities and worldviews of young people. And not just Black ones, either. In many ways, what we read in books and see and hear in popular culture informs the way we view—and therefore treat—other human beings. Ourselves included.

Yes, I’d decided not to believe the messages from those high-school books: I was not minimally intelligent (like Jim from The Adventures of Huckleberry Finn) nor destined to be a scapegoat (see Tom Robinson from To Kill a Mockingbird), and I wasn’t powerless with regard to my own destiny (shout-out to Crooks from Of Mice and Men). But I was still utterly petrified that the stories I wanted to tell would be met with either total disregard, or worse: ire and derision. Especially since I had zero intention of feeding into the stereotypes that seemed to be “acceptable” when it came to portraying Black people in literature.

Would people even want to read stories about kids like me? Would they be as interested in our joys and triumphs as they seemed to be in our oppression and pain? I wanted to write about Black kids living and loving. Winning. Facing down obstacles and utilizing their gifts to save the day.

This was stuff I hadn’t ever seen in books. At least not the books I was exposed to. Did the absence of these things really mean people just weren’t interested (as a publisher—or five— suggested when rejecting my manuscripts)?

These questions plagued me as I waited for my little book baby to make its way out into the world. And I still had a year and five months left to wait when I sat down in a movie theater seat on a Saturday in May 2016.

The latest Marvel Cinematic Universe film had just dropped: Captain America: Civil War. And from the opening scene, I was rapt. The plot was spectacular, the action pulse-pounding, and the relationships delightfully fraught. One thing I’ve always loved about the MCU portrayal of super heroes is that every single one is deeply complex and vividly human—even the ones who aren’t human at all. And you want to know their backstories.

So when a dude in a black catsuit comes out of nowhere and lands on a roof to fight the bad guy, then chases him through traffic largely on foot . . . and then, when caught by the police, just straight up removes his helmet to reveal his identity (umm, did somebody say badass?), and everyone in the theater clapped . . .

It literally changed everything for me.

Fast forward to February 2018. For almost two years, we’d heard whispers that the coming Black Panther movie would have a mostly Black cast, which was unheard of in the super hero space. The film released two days after Valentine’s Day and I didn’t go see it. I was scared. Scared of feeling let down. Scared people weren’t believing the hype . . . and even more scared that they were believing it and would wind up disappointed. My little book had come out four months prior, almost to the day, and though it sold well enough in the first week to make the New York Times bestseller list, it was gone from said list by week two, and I had no idea how sales were going.

What if this movie came out and “underperformed” as I’d heard editors say when some superhyped “diverse” book failed to meet sales expectations? Would that prove no one wanted stories about Black people doing great things and, you know, effectually end my storytelling career before it could really begin?

It took me a month to go see it. A month of it being the number-one film week after week. And the theater was packed when we took our seats. I even heard a guy in the row behind us say it was his fourth time seeing the movie in the theater (and at $16 per ticket, that sounded like a big deal).

Black Panther did well, obviously. It’s one of the highest-grossing films of all time.

But it’s also so much more.

The Black Panther—aka T’Challa aka Chadwick Boseman—struck a match the moment he landed on that roof in 2016. But his solo film in 2018 is what lit the fire of a revolution. People from all backgrounds got right on board with the Black king of a tiny fictional nation in East Africa, fighting to protect his country and its people from his cousin, an American-raised Black anarchist. There were only two white people who got significant screen time. Kids across the globe wanted to be the Black Panther and have super strength, speed, and catlike reflexes.

At long last, we were seeing Black excellence on-screen, in front of and behind the camera: The costume and production designers won highly coveted Oscars for their work. We saw a Black man—whose royal guard was made up of all Black women—rule with patience and integrity. We saw a wickedly witty Black girl genius and inventor (Shuri really changed my life, but we’ll save that story for a different foreword). And best of all, we saw what Black people could do. Make.

And it changed us all.

Which is why this book exists. As I mentioned earlier, you hold in your hands a collection of essays from a vast array of Black people—from the man who raised enough money to pay for over seventy thousand kids to see the film in theaters to the beautiful woman who played a red-clad warrior of the Wakandan royal guard, the Dora Milaje. All sharing stories of how their individual lives were impacted by this juggernaut of a motion picture.

Thanks to Marvel Studios’ Black Panther, I not only felt seen (finally!), but I also felt like I got the permission I needed to take up space. To tell the stories of my heart. To step out and make noise about things that don’t align with the ideas put forth in the founding documents of this country, especially when it comes to people who look like me.

As you read, I hope you’re reminded of all the ways this history-making film impacted you.

Creators, Writers, and Comics Legends on the Impact of Marvel Studios' Black Panther 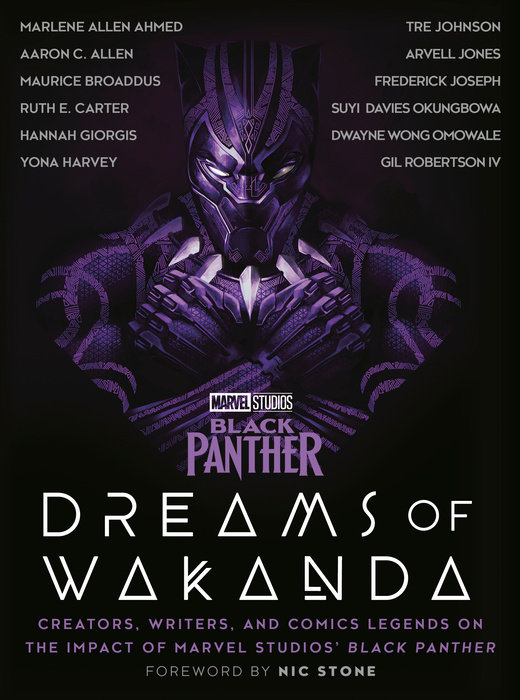