Hockey’s resident bad boy is hell on skates. But when he falls in love, he falls hard.

Nick: As one of the New York Nighthawks, I’ve got it all: fame, success, wealth, plus I’m handsome as hell.
As for my relationships? They could be better.
I know how to do one-night stands, but I’m starting to crave something more.
Then I meet Camille Benetti.
She’s sexy, smart, sarcastic—totally my kind of girl.
The only problem? Cami doesn’t date hockey players.
But she’s never met me. . . .

Cami: Nick George is impossible to resist. Not only is he scorching hot, he’s kind, he’s funny, and he wants me bad.
But I learned my lesson the hard way: no jocks.
So why do I agree to be Nick’s date to the wedding of the year?
One night . . . that’s our deal.
He is the best man, after all.
But Nick is crystal clear about his intentions. He wants a relationship.
And he’s tempting me to break all my rules. . . .

An excerpt from Ice Hard

“Toast! Toast! Toast!” The chants from my teammates become louder. The same word. On repeat. Until I stand front and center at the bar, beside my best friend and teammate, Christian Chase.

We’ve known each other for most of our lives. Since we were nobodies. Long before we ever went pro. Long before we earned our nicknames (me as the Dominator and him as the Cyclone) for our skills on the ice. Long before we won two cups together. Way before we ever knew of the brand-new expansion team called the New York Nighthawks, let alone joined the franchise—him as center and team captain, me as his unofficial enforcer, aka his right winger.

We’re still in the thick of our first season with the Nighthawks, and Chris is marrying the woman of his dreams. I don’t blame him for not wanting to wait until our off-season. Serena’s a catch, and Chris is in love like I’ve never seen him before.

“We’re back to where it all began.” I lean into Chris, raising my voice an octave above the crowd that’s hooting.

Chris laughs. “Technically, it began at a 7-Eleven, but don’t you dare mention that in your speech.”

I grab my drink from the bar behind me. We’re NHL guys. Some hold bottles of beer while others, like me, drink top-shelf bourbon. I raise my glass. “Quiet, guys! Quiet.”

“Shut up, assholes.” Thor, our resident Marvel movie fanatic and our right defenseman, also known as Theo Ture, stands on a chair, bellowing for the troops to get in line. This Thor doesn’t need an Asgardian hammer. His burly frame, unkempt hair, and long beard make him a force to be reckoned with. He’s also a player with mad skills who quickly moved up to our line of A-lister defensemen that causes opposing teams to cower.

“Thanks.” I offer him a smile of approval, then clap Chris on the back with my free hand. “Well, guys. Here we are. At The End Zone . . . where Chris kissed Serena. That should be the title of a movie, because it sure as hell sounds romantic.”

Damon the Demon DeLaurentis, our left winger, blasts the air horn I gave him, and a large banner unfurls from the ceiling, with a huge picture of Chris and Serena. Both smiling. Both happier than anyone has a right to be.

“Banner!” Thor roars. He really does Chris Hemsworth better than Chris Hemsworth. That’s what makes him so popular with the ladies. That, along with his uncanny ability to impersonate any actor. Ladies love his Robert Downey Jr. impression, too. Guess the Avengers are hot.

Lucky, also known as Ryan McGee, a fresh faced second line defenseman and prankster runs through thebar, wrapped in a different banner. This one features my best friend on a magazine cover. It was Lucky’s go-to prank when he first joined the team. Like this didn’t get old the first three times he tried tying the damned thing to Chris’s SUV. That magazine cover, lined in a row, with Chris all growly mad and shirtless enraged my best friend like nothing else.

“For the record, I knew nothing about this,” I say to Chris, who’s busy glaring at Lucky. “Look at the bright side, bro—at least it’s not attached to your Rover.” I’m a glass-half-full kind of guy. Especially when I throw a bachelor party that the host requested be tame.

The Vamp, our left defenseman Alexi Vladislav, chases Lucky through the bar, yanking the banner from him as groans erupt through the bar. Lucky is butt naked, streaking through the crowd. Covering my eyes with my free hand, I’m haunted by the image of a pale Lucky streaking us. An image I’ll never forget, not only because it’s forever seared in my skull, but because I’m sure it will be on YouTube tomorrow. There will probably be a meme or something. Lucky’s not-so-lucky charm will be the gift that keeps on giving.

“Hell, no, Lucky!” a woman chides, just as she’s shoving me aside. “Lucky won’t be lucky much longer if he doesn’t put on some damn clothes.”

“Sorry, I’ve got him.” Damon the Demon chases Lucky into the men’s room.

The brunette is tall with long legs. Her hair is parted straight down the middle, two braids cascading over her shoulders. She’s hot. And that’s before she turns to face me, dressed in a white blouse which is unbuttoned just enough to show off her black sports bra, a plaid skirt, tights, thigh-high socks, and Mary Janes. Forget just plain hot. This woman is holy f***ing scorching!

I can’t decide if she’s going for the “Sister Christian” look or a Britney Spears vibe. She seriously rocks the sexy-schoolgirl thing, and I fight the strong urge to make a play for her at my best friend’s bachelor party. She could be my teacher anytime.

“Understood.” I study the woman who has the guts to boss around burly hockey players. She wears minimal makeup and is a knock out, with high cheekbones, full lips, and an angular chin. And tawny eyes that are mesmerizing.

“You’re staring,” she says, eying me with a mock severity and an overemphasized facial expression. “Are you okay? Have you never seen a woman before? Should . . . should I call for help?”

I laugh. A full-on belly laugh. This usually doesn’t happen with women. The guys, sure. Women, not so much. We’re usually all hot and heavy to start and then have nothing to discuss, and/or nothing in common.

Holding two fingers to her eyes, she points them at Lucky in an “I’m watching you” way. It’s enough to make him turn beet red before she heads back behind the bar.

“Okay, now that we’re all clothed, let’s get back to business.” I study the many faces that comprise our team. This loud, imperfect family of alpha males who are the Nighthawks. Sure, there have been some first-year growing pains, but we overcame them. Together. We united as a team, just like we’re doing today for Chris. Because this is where he met the one.
“Here, at this very bar, not too long ago, some of us witnessed a very public first kiss between Chris and Serena.”

Some cattle calling ensues. “Little did we know then that we were witnessing the start of something real. I mean, we’re NHL guys, right? What do we know about romance? Chris didn’t know a fucking thing. He spilled a raspberry Slurpee on Serena just to get her attention.”

Chris rolls his eyes, unable to hide his smile.

“Like I wouldn’t go there? Seriously, dude, I’m your best man. I had to go there.”

The crowd is eating this up. I command a room, and this is one occasion where that comes in handy. When the whoops and shouts die down, I add, “If Chris can snag the woman of his dreams, it gives us all hope. Besides, Serena brings out the best in him.”

“He’s right about that. She does.” Chris smiles at the crowd.

“I don’t have to tell you guys that Chris and I go way back. You already know that. I do have a confession to make, though.” This holds the crowd’s attention. There are some “oh yeahs” mixed in with some mock gasps for good measure. “The truth is, I never thought he’d find a woman who would put up with him or his shit.”

With a shrug, Chris laughs. So, does Liam Clair, our goalie and resident family man. Something tells me he’ll have competition for that title now that Chris and Serena are expecting their first child.

The crowd is with me. All of us are thrilled for our Cyclone, our team captain, our friend. No one more so than me. “You’re my best friend, you’re my family—my brother. Always have been. No one’s happier for you than I am.”

I raise my glass and the guys join me. Hands outstretched, with wide smiles, they shout in unison, “To Chris and Serena!” 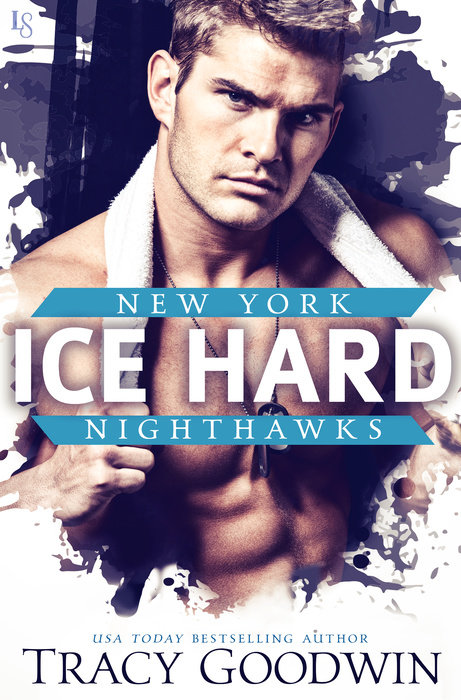