The compelling, poignant true stories of victims of a notorious adoption scandal—some of whom learned the truth from Lisa Wingate’s bestselling novel Before We Were Yours and were reunited with birth family members as a result of its wide reach

From the 1920s to 1950, Georgia Tann ran a black-market baby business at the Tennessee Children’s Home Society in Memphis. She offered up more than 5,000 orphans tailored to the wish lists of eager parents—hiding the fact that many weren’t orphans at all, but stolen sons and daughters of poor families, desperate single mothers, and women told in maternity wards that their babies had died.

The publication of Lisa Wingate’s novel Before We Were Yours brought new awareness of Tann’s lucrative career in child trafficking. Adoptees who knew little about their pasts gained insight into the startling facts behind their family histories. Encouraged by their contact with Wingate and award-winning journalist Judy Christie, who documented the stories of fifteen adoptees in this book, many determined Tann survivors set out to trace their roots and find their birth families.

Before and After includes moving and sometimes shocking accounts of the ways in which adoptees were separated from their first families. Often raised as only children, many have joyfully reunited with siblings in the final decades of their lives. Christie and Wingate tell of first meetings that are all the sweeter and more intense for time missed and of families from very different social backgrounds reaching out to embrace better-late-than-never brothers, sisters, and cousins. In a poignant culmination of art meeting life, many of the long-silent victims of the tragically corrupt system return to Memphis with the authors to reclaim their stories at a Tennessee Children’s Home Society reunion . . . with extraordinary results.

Advance praise for Before and After

“In Before and After, authors Judy Christie and Lisa Wingate tackle the true stories behind Wingate’s blockbuster Before We Were Yours, of the orphans who survived the Tennessee Children’s Home Society. With a journalist’s keen eye and a novelist’s elegant prose, Christie and Wingate weave together the stories that inspired Before We Were Yours with the lives that were changed as a result of reading the novel. Readers will be educated, enlightened, and enraptured by this important and flawlessly executed book.”—Pam Jenoff, author of The Orphan’s Tale and The Lost Girls of Paris

An excerpt from Before and After

“Have you considered a reunion?”

Connie Wilson is relaxing in her condo in Southern California with her beloved Labradoodle, Jackson, when the email arrives.

“Oh my gosh, Connie!” a book-club friend from Arizona writes. “Have you read Before We Were Yours?”

It’s June 2017, and the novel by Lisa Wingate is brand-new. Connie has not heard of it. But faster than her pup can nudge her to play tug-of-war, she downloads a digital copy. In only forty-eight hours, she devours it, tamping down emotions as she reads. The fictionalized story about children adopted through the Tennessee Children’s Home Society is oh so familiar to her.

Connie’s life is historic in a way she would rather have avoided: she is one of the last babies placed by the scandal-ridden orphanage. In her late sixties when she, Lisa, and I meet, Connie is one of the youngest members of a unique and uncomfortable club—living adoptees connected to TCHS. People whose lives were irrevocably altered at the hands of Georgia Tann. For Connie and thousands like her, events that took place decades ago are difficult to place in the past. The effects remain ever present.

On September 11, 1950, just two months after Connie’s birth, a criminal investigation into Tann’s adoption practices was announced. Orphanage funds were cut, and the babies on hand were left in limbo. Connie’s adoption was held up, and her guardianship was transferred from TCHS to the Tennessee Department of Public Welfare. That was when she joined the tail end of a decades-long line of sad statistics.

Under the autocratic control of Georgia Tann, and thanks to her effective grip on look-the-other-way political and civic leaders, TCHS managed to operate in Memphis from 1924 to 1950 without scrutiny or interference. Approximately five thousand children, many of whom were not actually orphaned, passed through the agency’s doors. An unknown number, estimated at five hundred, perished in unregulated, often squalid, holding facilities. Others were delivered into homes that faced little to no scrutiny, to parents who, for a host of reasons, could not adopt conventionally.

These real-life stories left their mark on ordinary people, now in the final season of their lives, as they pass along their experiences with TCHS and Tann’s deeds to future generations through their personal accounts of what happened . . . and through their DNA.

A blend of what was happening in the world, from the Great Depression to World War II and the Holocaust, and including the stigma of unwed motherhood, led to the growth of Tann’s network for obtaining and placing children. Poverty-stricken mothers gave up babies out of desperation; unmarried young women were not allowed to keep their newborns because of the taint of illegitimacy; and poor parents, hard at work, often unable to afford babysitters, found their children lured from front yards and into Tann’s chauffeur-driven black limousine as it glided around Tennessee and Arkansas. With her paid network of doctors, social workers, and even boardinghouse owners, Tann snatched babies up as soon as they became available.

Some frantic birth parents—along with the occasional physician—attempted to challenge Tann, a stern-looking woman with short hair and glasses. Tann, however, had political clout and immense wealth, built on the backs of children sold for profit, some of it from checks made out to her personally. With the help of her connections via Memphis mayor E. H. “Boss” Crump, a political kingpin with powerful ties throughout the state, and others in positions of authority, she deflected inquiries with the ease of swatting a mosquito on a Tennessee summer afternoon.

But now, in 1950, the year of Connie’s birth, the end of Tann’s reign of terror nears. Tennessee politics are changing. Crump is out. The new Tennessee governor, Gordon Browning, appoints attorney Robert Taylor to ferret out the grisly truth of TCHS’s Memphis operations. He has already discovered damning evidence. Only a small network of co-conspirators know the truth. With the investigation under way, they flee into the crevasses of Memphis and disappear like rats running into the city’s sewers. Although some community leaders—powerful, wealthy, political—have undoubtedly been complicit, all the blame is conveniently assigned to Tann.

She holes up in her home, reportedly in the last stages of uterine cancer—too ill, it is said, to respond to the charges or face the public. Governor Browning releases Taylor’s shocking initial report, which details Tann’s years of nefarious dealings in the adoption market. She has, the governor reveals, made herself rich and completed an unknown number of horrendous deals involving flesh-and-blood products.

Within days, on September 15, 1950, it is announced that she has died. Tann, fifty-nine, never married, leaves her estate to her mother, an adopted daughter, and an adopted sister. The orphanage is not mentioned. The Tennessee State Legislature quickly and quietly seals the paperwork of thousands of TCHS children, which will leave adoptees desperately searching for decades to uncover the truth about their heritage. The investigation concludes that Tann profited from the operation of TCHS in Memphis in excess of five hundred thousand dollars in the last ten years of her life—taking in today’s equivalent of between five and ten million dollars.

During that period, the investigation found, she placed more than a thousand children for adoption outside the state of Tennessee, principally in New York and California, the exact number not known.

If Connie, the baby girl born just two months before Tann’s death, and these thousands of other children were characters in a novel, justice as well as blame might have landed squarely on Tann’s head. Police would swoop into her Memphis Receiving Home, rescue her remaining charges, shackle Tann, and whisk her off to jail. She would endure a trial and be forced to stand eye to eye with children she procured in the 1920s or 1930s or 1940s, or with parents whose babies were snatched, or with people in California and New York who paid extra for children because they sensed that if they didn’t, their in-process adoptions might suddenly go wrong.

But real life does not happen that way.

Tann dies, never having admitted to her crimes and, supposedly, never having known that she has finally been exposed, and certainly not having paid back the money that supported her lavish lifestyle. She is never made to face families she misused, those good and kind people who will spend a lifetime unraveling the knots she tied, a lifetime trying to heal the hearts she broke.

But finally, all these years later, her name is ruined, her power gone. Now the triumph belongs to quiet conquerors, who are ready to tell their stories.

In a piece of history with so many villains, they are the heroes.

Still in the throes of reading Before We Were Yours, Connie is intrigued when her book-club friend surfaces again with an invitation: “Would you mind talking about you and the book?”

A seasoned traveler after years in the business world, Connie happily makes plans to hop a plane to Arizona a couple of months later. Spurred on by this interest in her past, she emails the author of the novel, a woman she has never met.

Reading your new book Before We Were Yours inspired me to go back through all the records, articles, and information I have gathered about my adoption . . .

I was reunited with my natural brother after 40 years of not knowing I even had one (same for him). It is a wonderful story if you are interested. I also think you would find interesting all the letters from Georgia Tann and the research for the 40 years that followed.

I’d also love to know how the other victims are today. What emotional impact this had on them.

Please let me know if you’d like me to come speak with you, bring any records, or just have a phone call.

Looking forward to hearing from you,

Lisa Wingate is a former journalist, an inspirational speaker, and the author of numerous novels, including the #1 New York Times bestseller Before We Were Yours, which has sold more than 2.2 million copies. The co-author, with Judy Christie, of the nonfiction book, Before and After, Wingate is a two-time ACFW Carol Award winner, a Christy Award nominee, an Oklahoma Book Award finalist, and a Southern Book Prize winner. She lives with her husband in North Texas. 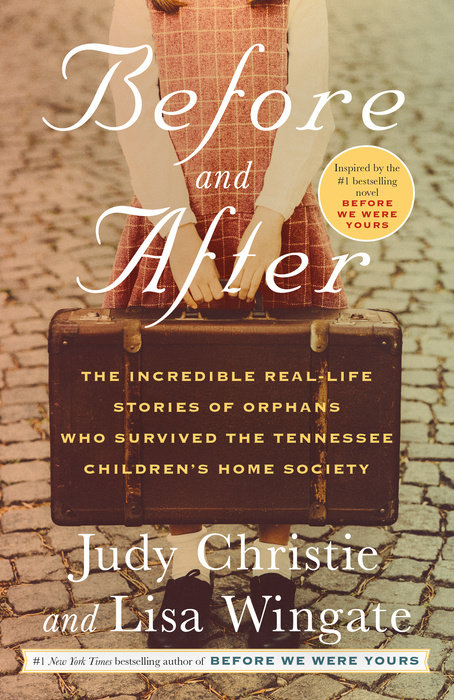