Humanity’s last surviving heroes must protect a shattered civilization from an all-conquering enemy in this thrilling sequel to The Cruel Stars.

“[The Shattered Skies] is a delightful military space adventure that runs at full tilt.”—Booklist

The Sturm, an empire of “species purists,” have returned from the farthest reaches of Dark Space to wage a war against what they call mutants and borgs: any human being with genetic or neural engineering. In a sneak attack, they overwhelmed almost all of humanity’s defenses, blasting vicious malware across galaxy-spanning networks, dark code that transformed anyone connected to the system into a mindless psychotic killer. The Sturm’s victory seemed complete, their final triumph inevitable, until one small band of intrepid, unlikely heroes struck back.

Now left with the remains of a fallen civilization, they must work together to rebuild what was lost and root out the numberless enemies of Earth. The Sturm invaders remain vastly more powerful—and they may not be the only threat lurking in the darkness of space.

An excerpt from The Shattered Skies

The blue-green jewel, silent and wreathed in white continents of cloud, floated in space far below him. Captain Anders Revell contemplated the vast burning crown that enveloped the world, the falling ruin and memory of the 101st Attack Fleet.

“Better lock in, Captain. We’ll punch out hard when the final ram gets here.”

Revell thanked the pilot before returning to his crash pod on the troop deck of the armored shuttle. He was the only passenger. He stepped backward into the plasteel capsule and felt the maglocks grab onto his panzerplate battlesuit.

Montrachet had been pacified. The enemy destroyed. Just as they had been across the entire front, and throughout the Greater Volume. The price of victory here, however, had been high. The 101st had died to free Montrachet, including the Fleet’s commander, Archon-Admiral Wenbo Strom; his flagship, the Astral Fortress Liberator; and the entirety of the Liberator’s battle group. It was but a fraction of the Republic’s strength across the wider battlefront, but none of the invasion planners had anticipated such grievous losses.

Revell should have been able to take a simple runabout down to the surface by now. Hell, he shouldn’t have needed to be here in the first place.

And yet here he was, sheathed in full armor, sealing himself into a hardened survival pod, just in case.

The shuttle’s drive cycled from a low hum to a deep bass as the pilot readied the sturdy little craft to force a passage down through the billions of pieces of debris, the remains of Strom’s expeditionary force, burning up in the denser layers of the planet’s atmosphere. With his free hand, he keyed in the sequence to seal and secure his personal armor. The faceplate slid up, entombing the Republican officer in the dark. But the lightless void remained for only a second before the suit’s diorama powered up. A final clamp secured his free arm, and the crash pod hatch closed. Within his carbon-armor gauntlet, Revell’s fingers had enough wiggle room to manipulate the control pad of the diorama.

He synced his helmet to the shuttle’s sensor suite, which flooded the display with data. There was nothing he could do to assist. He could only wait and watch through the HUD. His shuttle joined a convoy of small- and medium-sized craft, waiting in the shadow of two ramships for escort down through the debris field. Inside the helmet his lips twitched. A grim half-smile. The race traitors who’d done this had not meant to impede him, but they would doubtless be satisfied with that consequence. Despite the Republic’s stunning overall success on D-Day, this one part of the operation had turned into a rout and Captain Revell, aide-de-camp to Fleet Marshal Anais Blade, had been tasked with finding out why.

The marshal would decide how best to use that knowledge, but she was going to be a long while waiting on it if Revell could not even set foot on the planet below.

He didn’t annoy the crew with pointless demands for updates. They were just ferry drivers and he could see from the data feed it would be another ten or fifteen minutes before the final ballistic ramship arrived to lead the convoy down into the atmosphere. Revell took a few moments to survey the widefield visuals splashed across his helmet display—a dramatic panorama of battle cruisers, dropships, fast frigates, and stellar drekar attending the Astral Fortress Enterprise, newly designated flagship of the Republic’s forces in this sector. Most of the surviving elements of the 101st remained dispersed throughout the local area of operations, securing rocks and rings in the outlying systems of Eassar, Descheneaux, and Batavia.

Especially Batavia. A sacred site to be sure, last resting place of the exile ship Voortrekker, but also a crucial transit point for the follow-on forces soon to arrive from the Republic. Fleet Intelligence reported that a few capital ships of the local Javan and Combine regimes still lurked in nearby volumes, spared by chance from the pre-emptive strike that had collapsed resistance everywhere else. Those follow-on forces would be needed to deal with them.

Revell had scheduled two days to pick over the small archeological camp in the shadow of the Voortrekker, and another three to interrogate the surviving members of the dig team who had fled the site shortly before the first assault drops took it. Three days was a long time, admittedly. But these things always took longer when you weren’t using brute force. Much to his annoyance, agents of the Inquiry had already captured and executed most of the mutants’ colleagues, liquidating crucial assets of his investigation before he could stop them. But a few still drew breath and from them he was determined to learn what he could of Frazer McLennan. If that took three days, or even three weeks, so be it.

Revell breathed out as if ready to lift a heavy weight in the strength foundry.

If he’d had the room to move he would have shook his head in wonder.

It was a legitimate marvel that the great villain of humanity’s fall still lived; or to be more accurate, that some debased facsimile of the creature existed near seven hundred years later to answer for the original sin of its progenitor.

Revell tamped down on the visceral disgust which always attended contemplation of such perversions to the genome.

To the human soul, really.

For now he could not afford the indulgence of letting his feelings run free.

His fingertips twitched to swipe away the video from the shuttle’s external arrays, and bring up the take from Colonel Marla Dunn’s interrogation of the infamous war criminal. There wasn’t much. The machine that had extracted McLennan had reached into the local networks, brushing aside five layers of quantum-shifting security like a fine lace curtain. It torched the primary data sources—and murdered Colonel Dunn. At least, she was presumed dead. She had literally disappeared at the exact moment the homicidal AI arrived. The genome only knew what the thing had done with her, but the combined sensor fields of the surviving 101st revealed no trace of the officer anywhere in-volume.

Part of Revell did not want to find out. There were rumors, approaching the realm of dark fairy tales, about the appetites of the so-called Intellects.

But finding out was his job.

So he ignored the stink of his own body odors trapped inside the suit, and he reviewed the take.

For the moment this consisted of after-action reports compiled by the ground force intelligence cadre assigned to the Voortrekker landing zone. Interviews, debriefs, even hostile interrogations with personnel who witnessed the incursion or had responsibilities for securing the site against such attacks.

Most of them, Revell noted, were now being questioned by the Inquiry. The shuttle’s engine harmonics changed, and he felt the evolution as a distant vibration at the very moment he ordered the intelligence staffers released from the Inquiry’s jurisdiction and directly into his supervision. He smiled inside the helmet. It was almost as though the goons got his message and stamped their little feet so hard it set the planet to ringing like a bell.

But it mattered not.

He was the personal weapon of Anais Blade. Her cutting edge. And there was nothing the Inquiry could do about that.

The voice of the shuttle pilot crackled in his ears.

“Acknowledged,” Revell answered, flipping back to the sensor feed from the external arrays for a few seconds. From a perceived vantage point on the blunt, shovel-shaped nose of the combat shuttle, he watched the last ramship take up station at the head of the convoy. A great, brutish club of a thing, most of its superdense mass was concentrated in the hammerhead formation at the bow. The giant maneuvering engines burned with the pure white light of nuclear fire as the vessel took point ahead of its comrades.

“Initiating entry burn,” the pilot announced shortly, and Revell felt the power of the shuttle’s much smaller engines as a deep, thrumming pulsation that transferred a nanoscale fraction of their power through the hull of the shuttle, the plasteel sheath of the crash pod, and the flexible panzerplate shields of his personal armor to effect an unpleasant deep body harmonic throb somewhere between his nuts and his guts.

John Birmingham is the author of Emergence, Resistance, Ascendance, After America, Without Warning, Final Impact, Designated Targets, Weapons of Choice, and other novels, as well as Leviathan, which won the National Award for Nonfiction at Australia’s Adelaide Festival of the Arts, and the novella Stalin’s Hammer: Rome. He has written for The Sydney Morning Herald, Rolling Stone, Penthouse, Playboy, and numerous other magazines. He lives at the beach with his wife, daughter, son, and two cats. 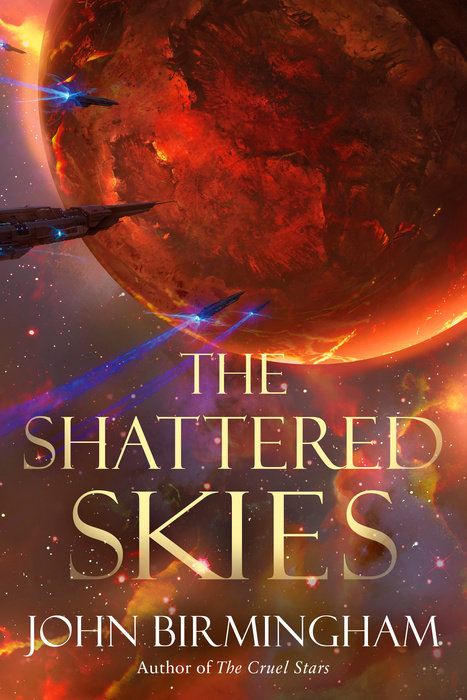