A Journey into the Mysterious System That Keeps You Alive

NEW YORK TIMES BESTSELLER • A gorgeously illustrated deep dive into the immune system that will forever change how you think about your body, from the creator of the popular science YouTube channel Kurzgesagt—In a Nutshell

“Through wonderful analogies and a genius for clarifying complex ideas, Immune is a truly brilliant introduction to the human body’s vast system for fighting infections and other threats.”—John Green, #1 New York Times bestselling author of The Fault in Our Stars

You wake up and feel a tickle in your throat. Your head hurts. You’re mildly annoyed as you get the kids ready for school and dress for work yourself. Meanwhile, an epic war is being fought, just below your skin. Millions are fighting and dying for you to be able to complain as you head out the door.

But most of us never really stop to ask: What even is our immune system?

Second only to the human brain in its complexity, it is one of the oldest and most critical facets of life on Earth. Without it, you would die within days. In Immune, Philipp Dettmer, the brains behind the most popular science channel on YouTube, takes readers on a journey through the fortress of the human body and its defenses. There is a constant battle of staggering scale raging within us, full of stories of invasion, strategy, defeat, and noble self-sacrifice. In fact, in the time you’ve been reading this, your immune system has probably identified and eradicated a cancer cell that started to grow in your body.

Each chapter delves into an element of the immune system, including defenses like antibodies and inflammation as well as threats like bacteria, allergies, and cancer, as Dettmer reveals why boosting your immune system is actually nonsense, how parasites sneak their way past your body’s defenses, how viruses work, and what goes on in your wounds when you cut yourself.

Enlivened by engaging full-color graphics and immersive descriptions, Immune turns one of the most intricate, interconnected, and confusing subjects—immunology—into a gripping adventure through an astonishing alien landscape. Immune is a vital and remarkably fun crash course in what is arguably, and increasingly, the most important system in the body.

An excerpt from Immune

What Is the Immune System?

The story of the immune system begins with the story of life itself, almost 3.5 billion years ago, in some strange puddle on a hostile and vastly empty planet. We don’t know what these first living beings did, or what their deal was, but we know they very soon started to be mean to each other. If you think life is hard because you need to get up early in the morning to get your kids ready for the day, or because your burger is only lukewarm, the first living cells on earth would like a word with you. As they figured out how to transform the chemistry around them into stuff they could use while also acquiring the energy needed to keep going, some of the first cells took a shortcut. Why bother with doing all the work yourself if you could just steal from someone else? Now, there were a number of different ways to do that, like swallowing someone else whole, or ripping holes into them and slurping out their insides. But this could be dangerous, and instead of getting a free meal, you could end up as the meal of your intended victim, especially if they were bigger and stronger than you. So another way to get the prize with less of the risk might be to just get inside them and make yourself comfortable. Eat what they eat and be protected by their warm embrace. Kind of beautiful, if it wasn’t so horrible to the host.

As it became a valid strategy to become good at leeching from others, it became an evolutionary necessity to be able to defend yourself against the leeches. And so microorganisms competed and fought each other with the weapons of equals for the next 2.9 billion years. If you had a time machine and went back to marvel at the wonders of this competition, you would be pretty bored, as there was nothing big enough to see other than a few faint films of bacteria on some wet rocks. Earth was a pretty dull place for the first few billion years. Until life made, arguably, the single largest jump in complexity in its history.

We don’t know what exactly started the shift from single cells that were mostly on their own to huge collectives working closely together and specializing.

Around 541 million years ago, multicellular animal life suddenly exploded and became visible. And not only that, it became more and more diverse, extremely quickly. This, of course, created a problem for our newly evolved ancestors. For billions of years the microbes living in their tiny world had competed and fought for space and resources in every ecosystem available. And what are animals really to a bacteria and other critters if not a very nice ecosystem? An ecosystem filled top to bottom with free nutrients. So from the very start intruders and parasites were an existential danger to the existence of multicellular life.

Only multicellular beings that found ways to deal with this threat would survive and get the chance to become even more complex. Unfortunately, since cells and tissues do not really preserve well over hundreds of millions of years, we can’t look at immune system fossils. But through the magic of science we can look at the diverse tree of life and the animals that are still around today and study their immune systems. The farther separated two creatures are on the tree of life and still share a trait of the immune system, the older that trait must generally be.

So the great questions are: Where is the immune system different, and what are the common denominators between animals? Today virtually all living beings have some form of internal defense, and as living things become more complex, so do their immune systems. We can learn a lot about the age of the immune system by comparing the defenses in very distantly related animals.

Even on the smallest scale, bacteria possess ways to defend against viruses, as they can’t get taken over without a fight. In the animal world, sponges, the most basic and oldest of all animals, which have existed for more than half a billion years, possess something that probably was the first primitive immune response in animals. It is called humoral immunity. “Humor,” in this context, is an ancient Greek term that means “bodily fluids.” So humoral immunity is very tiny stuff, made out of proteins, that floats through the bodily fluids outside of the cells of an animal. These proteins hurt and kill microorganisms that have no business being there. This type of defense was so successful and useful that virtually all animals around today have it, including you, so evolution did not phase this system out, but rather, made it crucial to any immune defense. In principle, it hasn’t changed in half a billion years.

But this was only the start. Being a multicellular animal has the perk of being able to employ many different specialized cells. So it probably did not take animals too long, in evolutionary terms, to get cells that did just that: Specialize in defense. This new cell-mediated immunity was a success story right from the start. Even in worms and insects we find specialized soldier immune cells that move freely through the tiny critter bodies and can fight intruders head-on. The further up we climb the evolutionary tree, the more sophisticated the immune system becomes. But already, on the earliest branch of the vertebrate part of the tree of life, we see major innovations: The first dedicated immune organs and cell training centers, together with the emergence of one of the most powerful principles of immunity—the ability to recognize specific enemies and quickly produce a lot of dedicated weapons against them, and then to remember them in the future!

Even the most primitive vertebrates, jawless fish, who look ridiculous, have these mechanisms available to them. Over hundreds of millions of years, these defense systems got more and more sophisticated and refined. But in a nutshell, these are the basic principles, and they work well enough that they were probably around in some forms around half a billion years ago. So while the defenses you have at your disposal today are pretty great and developed, the underlying mechanisms are extremely widespread and their origins reach back hundreds of millions of years. Evolution did not have to reinvent the immune system over and over again—it found a great system and then refined it.

But your immune system is also not a singular thing. It is a complex and interconnected collection of hundreds of bases and recruitment centers all over your body. They are connected by a superhighway, a network of vessels, similarly vast and omnipresent as your cardiovascular system. Even more, there is a dedicated immune organ in your chest, as big as a chicken wing, that gets less efficient as you age.

On top of organs and infrastructure, dozens of billions of immune cells patrol either these superhighways or your bloodstream and are ready to engage your enemies when called. Billions more sit guard in the tissue of your body that borders your outsides waiting for invaders to cross them. On top of these active defenses you have other defense systems made up of quintillions of protein weapons that you can think of as self-assembling, free-floating land mines. Your immune system also has dedicated universities where cells learn who to fight and how. It possesses something like the largest biological library in the universe, able to identify and remember every possible invader that you may ever encounter in your life.

At its very core, the immune system is a tool to distinguish the other from the self. It does not matter if the other means to harm you or not. If the other is not on a very exclusive guest list that grants free passage, it has to be attacked and destroyed because the other might harm you. In the world of the immune system, any “other” is not a risk worth taking. Without this commitment you would die within days. And as we will learn later, sadly, when your immune system under or overcommits, death or suffering are the consequences.

While identifying what is self and what is other is the core, it is not technically the goal of your immune system. The goal above all things is maintaining and establishing homeostasis: the equilibrium between all the elements and cells in the body. Something that can’t be overemphasized enough about the immune system is how much it tries to be balanced and how much care it puts into calming itself down and not overreacting. Peace, if you so want. A stable order that makes being alive pleasant and easy. The thing that we call health. The basis for a good and free life where we can do what we desire, not held back by pain and disease.

Philipp Dettmer is the founder and head writer of Kurzgesagt, one of the largest science channels on YouTube with over fourteen million subscribers and one billion views. After dropping out of high school at age fifteen, Dettmer met a remarkable teacher who inspired in him a passion for learning and understanding the world. He went on to study history and information design with a focus on infographics. Dettmer started Kurzgesagt as a passion project to explain complicated ideas from a holistic perspective. When the channel took off, Dettmer dedicated himself full-time to making difficult ideas engaging and accessible.

A Journey into the Mysterious System That Keeps You Alive 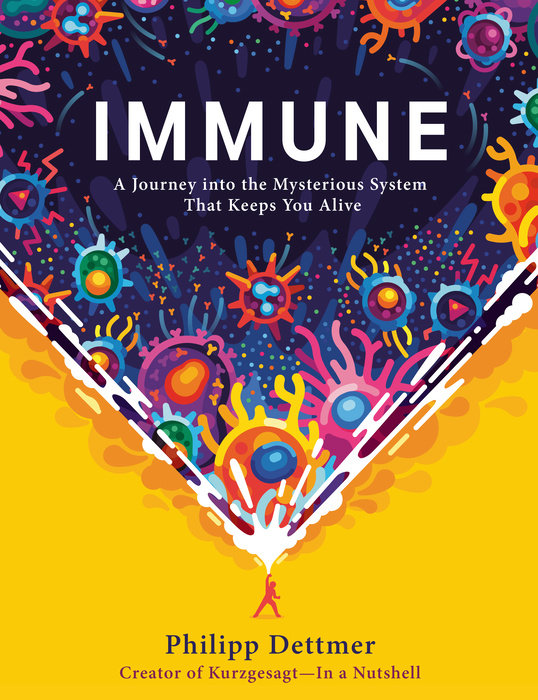