Second chances are even sweeter. . . .

Aphrodite Du Bell has always resented her name. While the members of the ton, and even the queen herself, praise her warm brown skin, perfect curls, and exquisite features, Aphrodite can’t help but think that living up to the literal goddess of beauty is asking a bit much. Her renowned loveliness certainly didn’t stop the love of her life from jilting her and marrying another woman four years ago.

When Aphrodite’s formidable mother summons her back to London to aid in her sister’s debut, she has no choice but to acquiesce. But Aphrodite is determined to ignore one man in particular: Evander Eagleman, the Duke of Everely, the man who devastated her all those years ago. Yet why does her guileless heart still flutter at the sight of him?

Evander Eagleman lost his chance for true love, but now that he is an unattached widower, he is determined to win back Aphrodite’s trust—and her hand in marriage. But just as the couple make strides to mend old wounds, Evander’s true reason for rejecting Aphrodite threatens their coveted future . . . and even their lives.

An excerpt from Aphrodite and the Duke


My name is Aphrodite Du Bell.

Yes, truly. Aphrodite, as in the goddess of love and beauty. A name wholly magnificent, yet, to my mind, utterly cruel to give a child, for who could live up to such a grandiose mantle? Was it not daring all the world to measure a young lady’s beauty not against her peers but against a goddess? If she did not meet the measure, she would be left to ridicule and mockery. Should she be blessed with extraordinary beauty, she would be cursed with the expectation of magnificence. Failing to meet that expectation would also herald ridicule and mockery. It is an unforgiving name, and I believed it was fated to bring forth some great tragedy, just as in the myths.

For all the stars in the sky, I could not fathom why Father and Mother had given me this burden. Even upon asking them, they had no remorse for their actions and thought themselves quite clever. So much so, they proceeded to name my three younger sisters after goddesses as well, though they were more fortunate than I with their names—Hathor, Devana, and Abena. If you were not as scholarly as my father—who had taught much to my mother in terms of Egyptian, Slavic, and West African mythology—you might be utterly unaware that those were the names of deities. So my sisters’ burdens did not equal my own. And my two brothers, named after heroes, Damon and Hector, made off quite easily as well, though they were men, and such were their lives.

We were the six children of Lord Charles Du Bell, the Marquess of Monthermer, and Lady Deanna. To all the world that mattered, we were among the most prominent families, fortunate with title, wealth, wit, beauty, and of course, a loving home, which was Belclere Castle. With the exception of my elder brother, not one ill word could have been uttered about any one of us . . . until certain events came about in my life. After years of running away I was now in a carriage on my way back to London society.

“The man is a fiend, a wolf among men just like his father was,” my dear brother Damon complained.

“Careful, my dear, you shall wake her,” his soft-spoken new wife, Silva, said in reply, believing I had somehow managed to fall asleep. I could feel the pressure of their gaze upon me.

“We have only just succeeded in convincing her to return,” my brother whispered. Damon had many talents, but holding his tongue was never one of them. “Now sister’s letter says that beast will also return to London this season.”

They were speaking of him. Rather than betray any inner workings of my mind or heart, I kept my eyes closed.

“It is to be expected. Does he not have a sister due to come out as well?” Silva asked.

It was to be expected. As our sister Hathor and his sister, Verity, had now come of age, at eighteen.

“I may have forgotten, but surely our mother did not. She should have instructed Hathor to wait another year to spare us the reopening of this wound.”

How unfair that would have been to Hathor.

“Do you believe she did not know? The duke is a widower now,” Silva said.

“After the disgrace and humiliation he delivered to my family? He does not deserve even the poorest of women, let alone my sister. I will never allow it.”

“It is not you who would be called to allow it but your father. And should your mother wish it, your father will allow it.”

The sound that came from his chest was one of evident frustration. Again, his wife was right.

“If my mother arranged this on purpose  .  .  .” He sighed heavily. “I am at a loss as to the state of her mind. How could she possibly forgive him?”

“Is she not his godmother?”

“Is my sister not her daughter?” he retorted angrily.

Once more, they were silent and undoubtedly examining me to see if I had awakened. But I had become proficient in the art of feigning sleep. It was all in the breathing.

“He may be her godson, and his mother may have been her very best friend, but surely none of that can overcome the love of a mother for her daughter.” He spoke resolutely, so it was only natural that his wife agreed.

“Then, by your reasoning, it cannot have been done on purpose, so you can spare your jaw any further tension,” Silva replied. The soft laughter between them nearly made me break my act, as I wished to smile alongside them.

My brother Damon, though kind and sweet to his family, had had the reputation of a rake in society before he wed the young Miss Silva Farbridge, the only daughter of a baron. It came as a surprise to everyone, even my mother, who had an eye for these things. The many women he’d had dalliances with were rumored to be very handsome indeed. Miss Silva Farbridge, however, was thought to be quite plain. She, a lady he had seemingly overlooked, and he, a lord that all were sure she did not like, until a few weeks ago when they became beside themselves in love. I was unaware of what had brought this love to fruition, and the two of them held that secret close. The only explanation they offered anyone was simply that their previous encounters had been misunderstandings. No one asked anything more, and they were quickly married, though I was desperately curious.

“Your sister is a great beauty. I am sure there will be callers in line at the door for her hand as well as Hathor’s,” Silva said.

“Yes, it is good for her to return to London. My only fear is that she shall be led astray upon seeing him, and be hurt once more.”

“It has been four years. You believe she still thinks of him?”

“I do not know. Odite never lets any of us in on her true thoughts. The only thing we are all sure of is that she loved him. I can only pray that she has fully removed him from her heart.”

There was no doubt in my mind that my brother would do anything for me. Not just him, but my father, my mother, and my other siblings as well. They all loved and cared for me so very much and I wished not to worry them, but my thoughts would either shock them or cause them unease.

Often, I felt as though I were a rare and precious bird, trapped within a cage of gold, on exhibition for the world. It was my duty to appease my viewers, and truly, I did my best, but there were times when it was all so arduous. I wished to be free. And the only time in my memory I had felt such freedom was in my youth . . . with him, Evander.

Since my mother was his godmother, we were afforded many opportunities to speak with each other growing up. He frequented our home freely, though our encounters always took place under the watchful eyes of my governess or lady’s maids. Evander had the keen ability to see through all my acts. When my sisters had all but driven me mad, and I said nothing, allowing them their way, he knew I cursed them in my mind, and would walk by and say the curse for me to hear. When I wished to eat more at the table than what was becoming of a young lady, he would secretly have a dessert saved and left for me in my rooms. Books that had been withheld from ladies or amended for decency, he would lend me in the full version.

And when I was sixteen, he made me this one promise: When we are married, you will be free to be however you wish to be. I swear it.

I had stared at him in awe and wished to marry him right then. But my family would not allow it. My mother said I was still far too young, despite knowing others my age who had married. We were of two great and noble houses, so all things had to be done in order and with the utmost care. She believed I must wait until the opportune time. I did not think it would be a whole two years later. But once my mother was determined, there was no winning against her. I was mightily cross with her.

But finally, on the day of my coming out, as everyone else fluttered about nervous at being before the queen, I was calm. It was said that I looked like royalty and had been trained as such all my life. The truth of the matter was that my thoughts and emotions were elsewhere—on a future that I had assumed would begin with him. Several gentlemen called upon me the day after, but I gave no heed to any of them as I waited only for him.

I waited in my very best dress.

I waited until the sun went down, and my mother forced me to bed. The very next day, I waited again. For five days, I waited, confident that whatever held him would soon end, and he would appear before me. Until the sixth day came, and we got word of a wedding.

J.J. McAvoy has written numerous independently published novels that have been translated into six languages and are bestsellers in Turkey, Israel, and France. Her debut was Aphrodite and the Duke. She is active and delightful on social media. 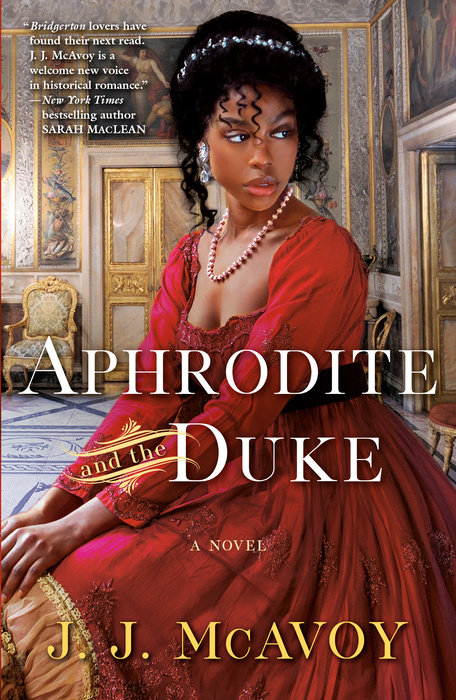