A Natural Approach to Health for Women with Polycystic Ovary Syndrome

PCOS is the most common hormonal disorder among women of reproductive age, according to the Mayo Clinic. Characterized by numerous small cysts in the ovaries, PCOS affects up to 10 percent of all women and 14 million women in the United States alone. It is linked to infertility, diabetes, heart disease, and endometrial cancer. While this disorder is believed to be genetic and incurable, it is controllable.

In this prescriptive plan, dietitian Hillary Wright demystifies the condition by explaining its underlying cause--insulin resistance--and helps readers understand how diet and lifestyle can influence reproductive hormones and decrease risk for diabetes, heart disease, and infertility. This book is packed with simple dietary and nutritional specifics: day-to-day strategies, sample meal plans, and shopping and snack lists. Updates include new information on diet therapy and exercise, the newest research on PCOS and soy and dairy, revised meal plans, and updated resources and shopping lists. The PCOS Diet Plan is the most comprehensive and authoritative guide to managing this increasingly diagnosed condition.

An excerpt from The PCOS Diet Plan, Second Edition

The first time a woman with polycystic ovary syndrome (PCOS) showed up in my office, I had no idea what to do for her. In addition to enduring many troubling symptoms of the condition, she was also struggling with infertility. It was early 2000, and I had just returned to work from maternity leave after having my third son. I’d had no problems conceiving my first child, but it had taken almost a year and a half to get pregnant with my second son after treatment for secondary infertility three years earlier. As a fertility patient myself, I understood what she was going through. I’d been through all the tests—hormone tests, an endometrial biopsy, a hysterosalpingogram (a procedure that involves blasting dye through the fallopian tubes to make sure they’re open, which in some cases actually paves the way for conception even if no blockages are found), and serial HCG (pregnancy hormone) tests once I got a positive pregnancy test. The barrage of tests left my arms looking like those of an IV drug addict. Fortunately, the solution to my secondary infertility had been some relatively simple hormonal tweaking, and, interestingly, I hadn’t required any intervention for my third child. But I was well aware how complicated the quest to have a child could get. This woman’s course was likely to be much more complicated than mine: she was overweight, her hormones were out of whack, and her stress level was through the roof. Her treatment would involve more than a few well-timed hormone shots.

Given my personal experience with fertility challenges, I was thrilled that Dr. Natalie Schultz was interested in developing a partnership between the fertility and nutrition departments at the large medical practice in Boston where I worked as a nutritionist and she as a fertility specialist. I’d received my medical care from Natalie, and we had become close during my treatment. Besides being a fantastic physician, she was a big fan of the nutritionists in the practice, so when she also started to see women with PCOS, she looked to us for help.

Back then, I had no idea what this strange-sounding condition was, never mind how diet and lifestyle could potentially affect it. But Natalie was confident that we’d make a great team and could ultimately make a difference in these women’s lives. She patiently explained PCOS to me and answered my questions, as I tried to piece together some sort of diet therapy. I had my own team of nutritionists for collaboration. First was my biochemistry-whiz nutritionist colleague Ann Stawaris, who loves nothing more than debating the virtues of enzymes and chemical pathways. Next I found New York dietitian Martha McKittrick, who willingly shared with me what she knew about the condition. I also consulted what I consider the bible on PCOS, Samuel Thatcher’s PCOS: The Hidden Epidemic.1

The key to figuring out how to manage PCOS nutritionally was learning that in most cases, the driving force behind the condition is insulin resistance, something I knew a lot about. Growing up, two of my five siblings had type 1 diabetes, which is caused by a lack of the pancreatic hormone insulin. Insulin resistance, a condition characterized by inefficient use of this hormone, is the cause of the more common form of diabetes in the United States, known as type 2 diabetes. This early exposure to the world of diabetes care got me interested in becoming a dietitian in the first place.

Using my knowledge of how to manage insulin resistance, I began to treat women with PCOS. Initially there were just a few patients, but over time the number has grown to hundreds. One thing became clear: the women with PCOS had many symptoms and complaints in common, and most of them felt fairly underserved by the medical profession. I realized that many nutritionists knew little about this condition, and a number of them began to look to me for guidance. I developed a presentation on managing PCOS for dietitians in my area; time and again, I would receive the same feedback: “I really know nothing about this” and “Oh my God, I think I have it!” This wasn’t surprising, given that more than 97 percent of registered dietitians are female!

As we began to see more women with PCOS in our medical practice, the nutritionists and the fertility and endocrinology department began running group support classes for women with PCOS, many of whom were thrilled to have a place to finally talk about their health. A common thread for many of these women was knowing for years that something was wrong but never being able to get much satisfaction—or symptom relief—from their physicians. PCOS is a hormonal problem, and women would describe a wide range of physical and emotional symptoms. Many intuitively felt that their symptoms were connected, but unfortunately they frequently reported being brushed off by their doctors.

In the medical establishment’s defense, at the time there just was not as much awareness of the prevalence of polycystic ovary syndrome. For these women to finally land in the hands of a health-care team that got it was an amazingly affirming experience. As positive as this sense of validation can be, however, it is unnerving to learn about the reality of what a diagnosis of PCOS can mean to a woman’s overall health and fertility. Many women felt overwhelmed by the diet and lifestyle changes necessary to reduce the risks of a number of scary health problems, including diabetes and heart disease. In my experience, many women were first diagnosed with PCOS after seeking medical advice to find out why they weren’t getting pregnant. It’s easy to understand why they’d feel overwhelmed and stressed.

The PCOS support group we established was incredibly diverse: we had young women, older women (who were just figuring out the diagnosis despite years of fertility treatments!), straight women, gay women, teenage girls and their moms, women trying to get pregnant, and women with no interest in kids but a strong interest in avoiding diabetes.

I continued to see a steady stream of PCOS patients until I left the practice in 2006 to take a part-time job at Boston’s Dana Farber Cancer Institute. At this point I also established a private nutrition counseling practice that would ultimately be absorbed by the Domar Center for Mind/Body Health at Boston IVF, one of the nation’s oldest and most successful fertility treatment practices in the country. I was recruited by Dr. Alice Domar, an international expert on the application of mind-body medicine to women’s health issues, specifically for my expertise in the nutrition management of PCOS. I’ve been blessed to work alongside some amazing therapists, acupuncturists, clinicians, and support staff—all of whom are vested in the Domar Center’s philosophy of providing comprehensive care that is “grounded in science, inspired by compassion.”

That motto nicely frames my intentions for this book, The PCOS Diet Plan: to provide diet and lifestyle information that is backed by science and designed to empower women diagnosed with this condition. When applied soundly to one’s own life, this information can initiate broad health and life-enhancing effects. The strategies described in this book are not overrestrictive or off the wall, and they can easily be followed by anyone interested in healthy living. They require a little education on how female bodies work—or, more specifically, how women’s bodies were designed to work—and how we can adjust diet and lifestyle to work with our genetic makeup in an environment that often colludes against it.

HILLARY WRIGHT is the director of nutritional counseling at the Domar Center for Mind/Body Health at Boston IVF, a Harvard-affiliated fertility treatment center. She is a registered and licensed dietitian with more than twenty years experience counseling clients on diet and lifestyle change. Wright serves part-time as a nutritionist at the Dana Farber Cancer Institute in Boston. She is also a former contributing editor and regular writer for the newsletter Environmental Nutrition.

A Natural Approach to Health for Women with Polycystic Ovary Syndrome 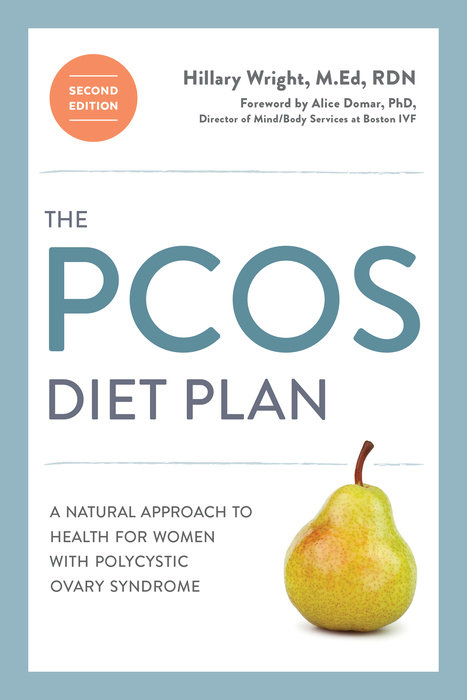