One Reporter's Quest for a Weight-Loss Regimen that Works

The New York Times bestselling author of Tomatoland test drives the most popular diets of our time, investigating the diet gurus, contradictory advice, and science behind the programs to reveal how we should—and shouldn’t—be dieting.

“Essential reading . . . This will completely change your ideas about what you should be eating.”—Ruth Reichl, author of Save Me the Plums

Investigative journalist Barry Estabrook was often on the receiving end of his doctor’s scowl. Realizing he had two options—take more medication or lose weight—Estabrook chose the latter, but was paralyzed by the options. Which diet would keep the weight off? What program could he maintain over time? What diet works best—or even at all?

Over the course of three years, Estabrook tried the regimens behind the most popular diets of the past forty years—from paleo, keto, gluten-free, and veganism to the Master Cleanse, Whole30, Atkins, Weight Watchers—examining the people, claims, and science behind the fads, all while recording his mental and physical experience of following each one. Along the way, he discovered that all the branded programs are derived from just three diets. There are effective, scientifically valid takeaways to be cherry-picked . . . and the rest is just marketing. Perhaps most alarming, Estabrook uncovered how short-term weight loss can do long-term health damage that may go undetected for years. Estabrook contextualizes his reporting with an analysis of our culture’s bizarre dieting history, dating back to the late 1800s, to create a thorough—and thoroughly entertaining—look at what specific diets do to our bodies, why some are more effective than others, and why our relationship with food is so fraught.

Estabrook’s account is a relatable, pragmatic look into the ways we try to improve our health through dieting, revealing the answer may be to just eat.

An excerpt from Just Eat

Dr. Dennis Beatty, my primary care physician for nearly two decades, has never been judgmental about my weight. He doesn’t have to be. His very presence says everything that needs saying. Doctor Dennis, who is in his fifties, has a boyishly fair complexion and is as lean as a high-school track star. I am in my sixties, and no one would mistake my physique for that of an athletic teenager. I have spent many years as one of the seven in ten Americans whom the Centers for Disease Control and Prevention (CDC) says needs to lose weight—about forty pounds in my case.

At the end of a physical exam just before I marked a milestone birthday, I could tell from the discomforted look on Doctor Dennis’s face that he was about to deliver news I did not want to hear. Rotating his laptop so that I could read the screen from where I perched in a hospital johnny on the examination table, he pointed to a series of numbers. My cholesterol was worryingly high, even though I had been taking medication to control it. In order to get it down, Doctor Dennis said he was going to up my dosage of atorvastatin to the maximum level he would prescribe. My blood pressure, he noted, was also elevated, despite a daily pill of irbesartan—again the maximum amount. Although he had run out of drug-based options, he told me there was one thing I could do to address both concerns.

I knew exactly what he was about to say. My wife, children, friends, and colleagues had all subtly suggested that I improve my eating and drinking habits to lose weight. Their advice inevitably came with an implied, if unspoken, “or else.” My father had the first of his two heart attacks at fifty-eight and died of a stroke twelve years later. My brother died at age sixty-four of a sudden massive heart attack. One of my grandfathers developed type 2 diabetes during the last decades of his life. The other died prematurely from heart disease. I had no desire to continue that family tradition.

Those extra pounds had attached themselves to my belly insidiously over four decades, beginning shortly after I graduated from university. For most of that time, my weight never really bothered me. I was strong, physically active, and, as far as I could tell, my plumpness did not interfere with my professional, social, or romantic pursuits. But sitting there in Doctor Dennis’s examination room, I realized that something had changed. My shirts strained against their buttons. The waistbands of my pants were uncomfortably tight. When walking down a street and catching sight of my reflection in shop windows, I recoiled. That lumpy character in no way fit the image I had of myself. I became embarrassed to take off my shirt at the beach. Hiking, cross-country skiing, and cycling—all activities I adore—were becoming less enjoyable as I huffed and puffed several yards behind my wife. There were still a lot of mountain trails I wanted to scramble over, lakes and rivers I hoped to paddle, and pools in which I planned to someday cast a fly. More wonderful than any mountain, an enchanting, impish granddaughter had entered my life, and I wanted to stick around to experience pleasures I had forgotten from when my daughters were growing up.

Joining the two-thirds of Americans who have medically significant amounts of weight to lose, I decided to go on a diet, something I’d never done. For the worst possible reason, I chose a regimen called the Whole30, yet I’ll wager most people select their diets according to the same lame criteria: It happened to be the weight-loss fad du jour. There was no way to avoid hearing about it. The Whole30: The 30-Day Guide to Total Health and Food Freedom, the original book (there are now at least a half-dozen spinoffs) describing the diet’s parameters and providing a hundred or so recipes, climbed to the top of the New York Times bestseller list, where it remained for more than a year. Whole30 inspired a mini-industry overseen by Melissa Urban, one of the book’s authors. In addition to sales of more than two million books, the company had millions of social media followers, made branding deals with the likes of Whole Foods Market and Blue Apron, the country’s largest meal-delivery company. Segments featuring Whole30’s youthful and oh-so-buff authors Urban and her then-husband Dallas Hartwig aired on Today, Good Morning America, Nightline, and many other national television programs. Publications, including Cosmopolitan, Parade, and the Washington Post, touted the diet’s results. It seemed as if half the people my wife and I knew were “doing a Whole30” and had become “Whole30-ers,” terms that Hartwig and Urban had coined.

The theory behind the Whole30 is that certain food groups damage our health, pack on pounds, and wreck the quality of our lives without our even realizing it. By eliminating “psychologically unhealthy, hormone-unbalancing, gut-disrupting, inflammatory food groups” for a full thirty days (hence the diet’s name), I would cleanse my body and push the “reset” button on my health.

Like almost all creators of contemporary diets, Hartwig and Urban insist that theirs, unlike the others, is absolutely not a diet. Rather, they write, “It is self-experimentation to help you determine how the foods you’ve been eating are actually impacting you—your digestion, your metabolism, your immune system, your cravings, and your emotional relationship with food.” They claim that it’s an unintended consequence that 96 percent of the people who go on their diet—oops, I mean self-experiment—lose weight.

In practice, the Whole30 regimen is nothing short of draconian. Under Hartwig and Urban’s mantra of “tough love,” Whole30-ers are absolutely forbidden to consume dairy products. In Hartwig and Urban’s world, milk, whether it comes from a cow, a goat, or a sheep, contains growth and immune factors (good for baby ungulates, bad for adult humans) and inflammatory proteins. It can provoke a high insulin response and has been associated with autoimmune diseases and cancers.

Whole30-ers must also “slay the Sugar Dragon” because added sugars from any source, including honey and maple syrup, provide empty calories that can lead to hormonal and metabolic problems and promote insulin resistance, diabetes, and obesity. Sugar substitutes are also verboten; they can disrupt gut bacteria, and they prevent you from conquering your sweet tooth. Alcohol of any type—even cooking wine—is banned because booze has the same ill effects as sugar, only worse, and is a neurotoxin to boot. Because they produce hormonal imbalance and contain inflammatory proteins such as gluten, all grains, even whole grains, are banned. The Whole30 blacklist includes any foods that contain wheat, rice, corn, millet, or quinoa, a seed that was all the rage among conscientious eaters. Beans (including soy and soy products, like tofu) and peanuts must be avoided because they contain fermentable carbohydrates, which can cause an imbalance in gut bacteria.

Hartwig and Urban categorize everything we eat as either Whole30 Approved or not. There are no gray areas. Cheating or making even a small slip is strictly verboten. One tiny lapse—a sip of Pinot Noir, a nibble of cheddar, a dribble of skim milk in your coffee—even on the twenty-ninth day of a Whole30, requires going back to day one and starting all over again. Whole30-ers are also banned from weighing themselves for the duration of the program to prevent them from focusing on weight loss rather than enjoying all the other good things the diet is delivering.

Barry Estabrook is the author of Pig Tales: An Omnivore’s Quest to Sustainable Meat and the New York Times bestselling Tomatoland: How Modern Industrial Agriculture Destroyed Our Most Alluring Fruit, which was awarded a Farmworker Justice Award and inspired the documentary Food Chains. Estabrook is a former contributing editor at Gourmet, where his coverage in the labor abuses of tomato farming won a James Beard Award. He has written investigative articles on food, nutrition, and agriculture for the Washington Post, New York Times, and The Atlantic and his work has been included in the Best American Food Writing anthologies. He writes from his plot in Vermont where he gardens, tends a dozen hens, taps maple trees, and brews hard cider from his own apples.

One Reporter's Quest for a Weight-Loss Regimen that Works 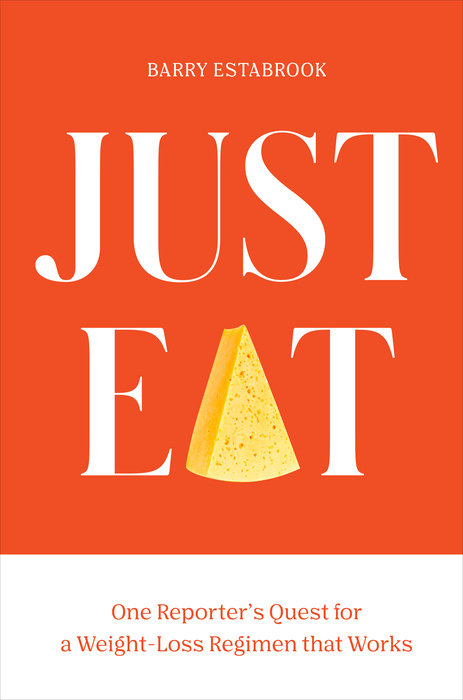