Russia in Recipes and Lore [A Cookbook]

100 traditional yet surprisingly modern recipes from the far northern corners of Russia, featuring ingredients and dishes that young Russians are rediscovering as part of their heritage.

“A necessary resource for food writers and for eaters, a fascinating read and good excuse to make fermented oatmeal.”—Bon Appétit

Russian cookbooks tend to focus on the food that was imported from France in the nineteenth century or the impoverished food of the Soviet era. Beyond the North Wind explores the true heart of Russian food, a cuisine that celebrates whole grains, preserved and fermented foods, and straightforward but robust flavors.

Recipes for a dazzling array of pickles and preserves, infused vodkas, homemade dairy products such as farmers cheese and cultured butter, puff pastry hand pies stuffed with mushrooms and fish, and seasonal vegetable soups showcase Russian foods that are organic and honest--many of them old dishes that feel new again in their elegant minimalism. Despite the country's harsh climate, this surprisingly sophisticated cuisine has an incredible depth of flavor to offer in dishes like Braised Cod with Horseradish, Roast Lamb with Kasha, Black Currant Cheesecake, and so many more.

This home-style cookbook with a strong sense of place and evocative storytelling brings to life a rarely seen portrait of Russia, its people, and its palate--with 100 recipes, gorgeous photography, and essays on the little-known culinary history of this fascinating and wild part of the world.

An excerpt from Beyond the North Wind

It's midnight at the edge of the frozen Barents Sea, yet the world is in motion. Ice pellets skitter along the strand; the northern lights undulate across the sky. I’m two hundred miles north of the Arctic Circle, in February, and I don’t think I’ve ever felt a wind more fierce. Russia’s legendary winter enfolds me—the cold and the snow that defeated Napoleon, the famed “General Winter” that conquered the Wehrmacht. But really, it’s not so bad—in fact, it’s enthralling. The cosmic display is riveting in its shape-shifting forms, its wondrous streaks and saturations. Eventually I tear myself away and trudge back to the guesthouse in the dark, tripping over snowdrifts, hoping not to lose my footing or my way. Indoors at last, I take ten minutes to shed my clumsy felt boots and multiple layers of clothing. My fingers are frozen stiﬀ—I finally feel what that cliché means. The unheated anteroom doesn’t help me thaw, and after the invigorating outdoor air, the smoke hanging in the room feels suﬀocating. Men are banished here to smoke, in this middle kingdom between comfort and cold.

Once inside the house, I begin to feel cozy. The kitchen windows are steamy with condensation. I pop into the bathroom, which doubles as the laundry room. It’s filled with plastic tubs of all sizes in fluorescent shades of pink, blue, and green. Tattered dish towels hang from makeshift clotheslines, their wide-eyed, patterned puppy dogs oblivious to the trays of kitty litter below. Someone has pulled the floral shower curtain back from the freestanding shower stall, and there, right on the base of the stall, I find a huge pot of Kamchatka crab legs. Truly enormous, straight out of a 1950s sci-fi movie. If I were to lie down side by side with one of these monsters, its leg span would be longer than I am. I decide not to try it.

It occurs to me that the steam must be from the boiling seawater into which these legs will soon descend. And sure enough, within fifteen minutes, the crabs are on the table, along with shot glasses of vodka, bowls of melted butter, and a basket of bread. Who needs anything more? By the time we finish cracking the giant crab legs and dipping them in butter, it’s past 2 a.m. I decide to take a shower to get completely toasty for bed. The guesthouse is silent. The shower curtain is once more in place. I pull it aside only to find the crab pot, now empty, back in the stall. But there’s room for us both, and so I step in. As the hot water rains down, I’m enveloped in a mist of salt and crab—far more aromatic and restorative than any spa treatment I’ve ever enjoyed. Afterward, I tumble into bed and think, “Yes, I really am in the Russian North!”

The Allure of the Arctic

But what, really, was I doing on the Kola Peninsula? Jutting into the Arctic Ocean, it’s one of the literal ends of the earth—next stop, North Pole. I thought of the early polar expeditions on foot and on skis, which usually ended in disaster. I thought of Mary Shelley’s Frankenstein chasing his monster over the ice. I reconsidered the phrase “going to extremes.”

It was no accident that I’d traveled to the remote village of Teriberka, braving the narrow tundra road from Murmansk whose formidable snowdrifts almost forced us to abandon the journey. Until the Soviet Union collapsed, Teriberka had thriving cod and haddock fisheries. Now the village was nearly deserted and—thanks to the Golden Globe–winning film Leviathan—synonymous with corruption and despair. But the extremes of this place invigorated my senses: the light and colors in the crystalline sky, the glimpses of ethereal beauty amid squalor and decay. The soothing aroma of braised elk softened the Arctic air. Yet a deeper reason had propelled me to the Kola Peninsula. It was here, in this isolated part of Russia, that I hoped to get beyond the outside influences that had shaped both imperial Russian dining and proletarian Soviet fare. I wanted to find the elemental flavors underlying traditional Russian cuisine. I was deliberately chasing the past.

It all started for me with blini, those irresistible pancakes that Chekhov described as “plump as the shoulders of a merchant’s daughter.” True blini aren’t the dry, bite-size morsels passed at cocktail receptions, mere vehicles for smoked salmon. The original Russian pancakes are lacy, with the robust flavor of buckwheat and pocked with pores to soak up melted butter. Saucer-size blini are one of Russia’s most ancient dishes, dating back to pre-Christian times, when they were baked on hot stones at the spring equinox. Shaped into rounds in the image of the sun, they beckoned the return of solar warmth after the long, dark winter.

Not surprisingly, the pagan people living in this northern region practiced a cult of the sun until Christianity was introduced in the tenth century. Their early beliefs still echo today through the round golden blini traditionally prepared for Maslenitsa, the Butter Festival marking a farewell to winter that evolved into a weeklong pancake indulgence before Lent—an all-out celebration that included troika and toboggan rides, ritualized fistfights, and kissing fests. Images of light and sun abound in Russian folktales, where the trees in distant magical kingdoms hang heavy with golden apples, and a single feather from the elusive firebird is incandescent enough to illuminate an entire room. One hero, Ivan Tsarevich, undertakes impossible quests to the mythical Kingdom under the Sun, an earthly paradise where the sun always shines. In other tales, a crystal mountain shimmers, and crystal bridges radiate light. Within these stories, passed on for more than a thousand years through poetry and song, lies a meaning deeper than fantasy expressing the Russians’ collective ancestral memory of a northern land close to the sun representing paradise on earth. Some geographers have suggested that this utopia wasn’t just wishful thinking, arguing that before the last ice age, the climate of the North was far more temperate than it is today, that deep in the past, the seasons may not have cycled into such relentlessly harsh winters. There may indeed have been warmth, radiant light, and lush vegetation even at this northernmost fringe of Europe.

Hints of this splendid land can be found in the name of the Kola Peninsula, which evokes kolo, an ancient Slavonic term for the sun. There are reminders, too, in the winter solstice holiday known as Kolyada, when Russians celebrate the shortest day of the year and the rebirth of the sun by baking gingerbread in the form of goats, birds, cows, and bears to bring good fortune. The Russian version of the Gingerbread Man, Kolobok, is round as the sun, a shape that allows him to tumble freely through field and meadow until he’s outwitted by a clever fox.

In the nineteenth century, dozens of spiraling stone labyrinths, believed by some anthropologists to trace the orbit of the sun, were discovered on the Solovetsky Islands oﬀ the southwestern coast of the Kola Peninsula. The abundance of solar associations in folklore and in life, coupled with the mythical geographies recorded by Herodotus and Pliny the Elder, led some Soviet researchers to conjecture that northwestern Russia was the site of the legendary realm that the ancient Greeks considered the cradle of civilization: Hyperborea, the land “Beyond the North Wind,” where the sun always shone and people lived to a thousand years without discord or sorrow, in a land so divine that the sun god Apollo himself traveled there. Hyperborea was a place of spiritual centeredness where people lived in harmony with nature, absorbing positive energy from the sun as well as from the magnetic North Pole. Hyperborea was considered the birthplace of human ingenuity, of technology. Is it a coincidence that the earliest Russian sagas describe ingenious towers inside which shimmered the sun, moon, and stars?

Such luminous mythology may seem a long way from Teriberka’s visible decay, but even as the abandoned fisheries and desolation bespeak the death of Soviet life, Russia’s past—the distant past—seems very much alive. My travels to Russia’s Far North, including the Kola Peninsula and the Arkhangelsk region to the east, revealed a deep connection to bygone eras. Beyond the cities lie villages lost in time, virtually unchanged for hundreds of years, where the inhabitants still use traditional masonry stoves for cooking and heating, and still fetch water from the river. Most do enjoy electricity, thanks to diesel generators, so they may also have TV. And it’s not that they are unaware of the present; they’ve simply chosen to live by diﬀerent rhythms.

Darra Goldstein is the author of Fire + Ice, which was nominated for James Beard, IACP, and The Art of Eating awards. The founding editor of Gastronomica: The Journal of Food and Culture, named Publication of the Year by the James Beard Foundation, Darra also serves as series editor of California Studies in Food and Culture, and has written for Gourmet, Saveur, Bon Appétit, and The New York Times.

Russia in Recipes and Lore [A Cookbook] 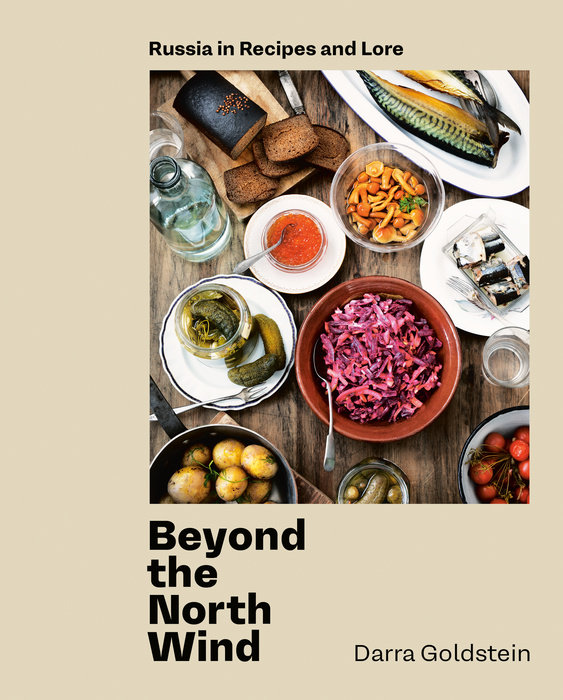