Design a succulent garden of your own, with inspiration, advice, and instructional step-by-step projects for container gardens, small-space gardens, mixed gardens, and more.

You can't help but be mesmerized by the eye-catching geometric forms and jewel-toned colors of succulents. But how do you grow these beauties in your own garden? One of the only books dedicated to succulent garden design, Striking Succulent Gardens is a stylish, modern gardening book for beginners and enthusiasts alike.

Known for his colorful approach and bold use of varied textures and shapes, garden designer Gabriel Frank offers practical ideas, simple concepts, stunning full-color photography, step-by-step instructions for a dozen different gardens, plant recommendations, basic succulent care, and an inspired approach to creating living art in your own garden. For those in colder climates, there is a list of cold-hardy succulents and advice for bringing container gardens indoors for the winter, making succulent gardens achievable no matter where you live.

An excerpt from Striking Succulent Gardens

Down the Garden Path


Regardless of the color of your thumb, you’ll find that succulent plants are an intriguing bunch. Appealing to both the design world and dirt gardeners alike, succulents are one of the few types of plants that offer a variety of striking forms and vivid colors, along with a vibrant presence. Even folks who aren’t initially captivated by their visual spell are curious about their ease of care and sparse needs for water and tending. With built-in water storage, succulents are able to thrive in a surprisingly diverse range of climates around the globe, from dense jungles, to scorching deserts, to a host of unforgiving environments in between.

Although succulent plants are not a silver bullet for every application, one of their best features is being adaptable to challenging conditions in which other plants struggle. Shallow soil depths in containers or nutrient-lean soils don’t pose problems, as these conditions are similar to the difficulties succulents regularly face in their native rocky environments. And once plants are established, they don’t need regular watering, because succulents carefully self-regulate with onboard water reservoirs during dry times. This means, for example, that you can leave for vacation and not worry about returning to a dehydrated garden! Compared to a traditional garden, you don’t need to expend much time and energy to keep them looking attractive throughout the year. Succulents are welcome as a user-friendly addition to any garden to provide a functional fit for our time-and resource-starved landscapes.

In this book, I’ll introduce you to some of the best types of succulents for your landscape, including the friendly rosette forms, striking aloes, sculptural agaves, and misunderstood cacti. I’ll provide examples and advice for incorporating them into your garden (including small spaces), mixing them with non-succulents, and growing them in containers. I’ve included information on succulent care to help you keep your plants healthy and happy, and on propagation so that you can grow new plants for yourself and your friends. In addition, step-by-step projects are included throughout the book, as well as tips on basic design principles—from scale and  contrast, to texture and rhythm—so that you can understand how to think like a garden designer and plan the succulent garden of your dreams.

But before we begin, let’s make a pit stop to clarify the three overarching concepts that are often misunderstood. Although succulents are simple in nature, they’re easily confused with regard to their garden applications. It’s time to set the record straight.


Are Succulents and Cacti the Same?

Although these two types of plants are commonly lumped together, they have important differences that set them apart. The helpful riddle that both separates and relates the two is this: all cacti are succulents, but not all succulents are cacti. The word “succulent” stems from the Latin succus, meaning juice or sap, and all plants that store an abundance of liquid in their flesh can be considered succulents—including cacti. Cacti fall into the succulent category at large because of their ability to store water, but they have developed specific physical features, namely areoles—the buds from which primarily spines grow (see photo, page 94)—that distinguish them as a unique family of plants: Cactaceae.

You can think of cacti as the most intrepid division of the succulent tribe, sent to conquer the driest climates on Earth. Taming this austere world took some significant anatomical upgrades over several millennia. True leaves were shed and thickened, and armored stems became the primary surface for photosynthesis. Areoles developed on the stems as distinct buds from which spines, flowers, or branches arise. No other family of plants besides cacti possess areoles, so their presence is a standout feature from other succulent families. The layout of areoles across the stem often forms striking geometric patterns, enabling an impressive defense system of clustered spines. Barrel cacti (Echinocactus spp.), hedgehog cacti (Echinopsis spp.), and prickly pear cacti (Opuntia spp.) have particularly prominent areoles. To learn more about areoles and the cacti clan, see chapter 5, The Spiny Side.

Behind succulents’ rise to fame is their ease of culture and low water needs. Succulents do, indeed, need and enjoy occasional water, but the amount and timing of application are important considerations, so the gardener must strike a balance between conservation and dehydration.

Succulents’ root systems tend to be more wide than deep, spreading laterally to soak up shallow, infrequent rains. Internal cells within the plants’ flesh plump up fully with water after a soak, and these onboard reserves keep the plants alive until another shower refills the tank. In areas where succulents grow naturally, dry periods can extend for weeks, months, or seasons, depending on the climate. Because of these arid origins, succulent roots appreciate dry periods between waterings, which is why specialized potting mixes are grainy, coarse, and well-draining. Like good house guests respect their welcome windows, succulent roots prefer water to visit briefly, soak in, and continue on. Extended periods of water without relief lead to root rot and deterioration. Detailed instructions on the art of watering are provided on pages 142–146.


Can I Grow Succulents if I Don’t Live in a Desert?

Absolutely! Succulents have been pegged as desert dwellers, but they actually have a broad growing range throughout every continent except Antarctica. Although a majority of succulents inhabit dry regions, many species are from tropical, temperate, and mountain communities. The thread-leaved mistletoe cactus (Rhipsalis cereuscula), for example, is a common resident of steamy tree canopies in tropical forests of the Caribbean and the Americas, while the San Pedro cactus (Echinopsis pachanoi) and the old man of the mountain cactus (Oreocerus spp.) inhabit territories in the Andes from 3,000 to 10,000 feet.

In recent years, intrepid North American gardeners have pushed the envelope by growing succulents in wetter and colder climates, such as those in the Pacific Northwest, the Mid-Atlantic region, the Gulf Coast, Canada, and the Carolinas. A few succulents are indigenous to these areas, but gardeners are demonstrating that many more are surprisingly hardy outside their expected range. Would you guess that a multitude of sedums are native to Washington, Oregon, alpine regions in the Cascade Range, and even British Columbia? Broadleaf stonecrop (Sedum spathulifolium), Pacific stonecrop (S. divergens), wormleaf stonecrop (S. stenopetalum), and Oregon stonecrop (S. oreganum), in addition to many species of hens and chicks (genus Sempervivum) and hardy ice plants (genus Delosperma), will cheerily blaze through whiteout storms provided they have decent drainage. On the opposite side of the country, gardeners in the Mid-Atlantic and Northeast have been gradually lifting the succulent ban, bringing handfuls of agave, yucca, and cacti through snowy USDA Zone 5 to 7 winters. (The US Department of Agriculture, or USDA, publishes a zone map of the United States that serves as the standard for determining which plants will thrive in which locations. USDA zones are based on average winter temperatures.)

Juniper Level Botanic Garden in North Carolina is a both a pioneer demonstration garden and a fabulous nursery (Plant Delights) that has been trialing unique and unusual succulents and plants of all origins since 1988. Many exciting cold-hardy agave and yucca selections have been developed and made available through the nursery’s mail-order channel and open-garden programs.

Farther northwest, in the bone-chilling mountains of the Dakotas and Montana, native cacti genera Echinocereus , Pediocactus , Escobaria , and Opuntia  provide unthinkably hardy candidates for weather in the most frigid Zone 4 climates (from –25 to –30F). Because of a shorter growing season, these cacti are naturally smaller species, but they nevertheless provide great opportunities to add cacti to gardens in almost any climate.

No matter where you live and garden, I hope this book will provide information to help you embrace the beauty of succulents. I have yet to find a more enchanting category of plants that ask for so little to thrive. May you enjoy the journey of welcoming these extraordinary plants into your garden and life.

Gabriel Frank is the founder of Gardens by Gabriel, a landscape design/build firm in Morro Bay, California, known for its distinctive and dramatic succulent designs. A graduate of the New York Botanical Garden School of Professional Horticulture, he has been honored by America in Bloom and featured in Better Homes and Gardens's Country Garden magazine. 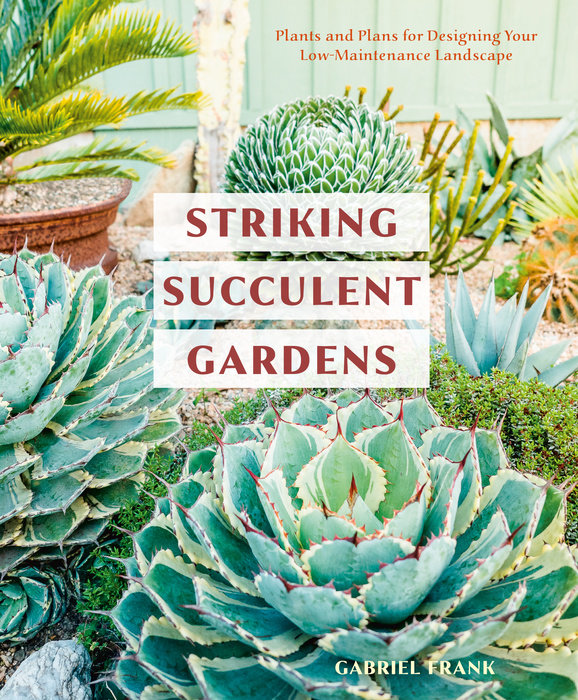