A smart and concise guide to staying together that draws on scientific findings, expert advice, and years in the marital trenches to explain why marriage is better for your health, your finances, your kids, and your happiness

Like you, probably, Belinda Luscombe would rather have had her eyes put out than read a book about marriage; they all seemed full of advice that was obvious, useless, or bad. Plus they were boring. But after covering the relationship beat for Time magazine for ten years, she realized there was a surprisingly upbeat and little-known story to tell about the benefits of staying together for the long haul. Casting a witty, candid, and probing eye on the latest behavioral science, Luscombe has written a fresh and persuasive report on the state of our unions, how they’ve changed from the marriages of our parents’ era, and what those changes mean for the happiness of this most intimate and important of our relationships.

In Marriageology Luscombe examines the six major fault lines that can fracture contemporary marriages, also known as the F-words: familiarity, fighting, finances, family, fooling around, and finding help. She presents facts, debunks myths, and provides a fascinating mix of research, anecdotes, and wisdom from a wide range of approaches—from how properly dividing up chores can result in a better sex life to the benefits of fighting with your spouse (though not in the car) to whether or not to tell your partner that you lost $70,000. (The last one is from firsthand experience.)

Marriageology offers simple, actionable, maybe even borderline fun techniques and tips to try, whether the relationship in question is about to conk out or just needs a little grease and an oil change. The best news of all is that sticking together is easier than it looks.

“Drawn from what she learned covering the relationship beat for Time, Luscombe’s how-not-to-split-up manual is witty and wise.”—People

“People are still getting married, and this book is here to help. . . . A warm and companionable volume . . . [Luscombe has a] wry touch, a gift for scene-setting, and an endearingly even temper.”—The New Yorker

“Few things are more important than the quality of our relationships—and especially the one we build with our life partners. Belinda Luscombe has written a smart and funny book to help anyone work toward a stronger and more fulfilling marriage.”—Sheryl Sandberg, COO of Facebook and founder of LeanIn and OptionB

My husband, Jeremy, does this thing with envelopes. He always asks if we have any, even though I’ve shown him where they are a hundred times. They’re on the shelf, with the other stationery items, near the pens, just above the photographs of our children that we have duplicates of but still can’t throw out and menus that we also haven’t thrown out. They’ve been kept there for decades, in skinny ledges that resemble mail slots. A complete stranger to our home, casting around the room, would immediately detect that this was the ideal envelope-­holding situation. Doesn’t matter. Every time my spouse needs to mail something, he says, “Do we have any envelopes?”

On the surface, it seems such an innocent question, and the answer so easy. “Yes, sweetheart. They’re on the shelf, near the pens.” But it makes me want to put stones in my pocket and walk into the ocean. Or even better, take them out and throw them at him.

Everything about his inquiry enrages and depresses me. Why can’t he learn where they are? Why is his attention so much more precious than mine that I have to answer this every time? His whole passive-­aggressive approach: “Do we have any envelopes?” is even more infuriating. He’s not asking “Could you get me an envelope?” That would mean facing up to the fact that he has never bothered to learn a basic housekeeping fact. That would mean acknowledging that he is treating his spouse like his personal assistant. That would mean clearly spelling out that what he really wants is for me to get him an envelope.

“Do we have any envelopes?” is what my spouse says. What I hear is “Whatever I’m doing right now is vital, even if it’s just random postage tasks. You, on the other hand, can’t possibly be doing anything worthwhile. Bringing me the office supplies that are in the shelves behind me as I speak if I would just turn around and look is the kind of trivial scutwork right in line with your abilities.”

How did this happen? I love this man. I have loved this man for years. I’ve never met anyone like him. He makes beautiful things, whether they are buildings or meals or children or adventures. He’s handsome and strong and great in bed. He’s patient and stoic. He makes up hilariously implausible theories about phenomena with very normal explanations and persists in pushing them in the face of overwhelming evidence. We have had two and a half decades of mostly happy coexistence. I’d be lost without him. So why does a small imperfection such as this set me off?

Because of familiarity. Familiarity is what you have when all the new relationship excitement has burned away like the boosters on a rocket and you’ve moved into an orbit in which your spouse rarely surprises you. It’s what comes after the deep late-­night talks about your hopes and desires have been replaced by negotiations on who is picking up the kids today. It’s when a relationship is more commute than adventure, more meal planning than dining out. Familiarity is the natural byproduct of every marriage and in many ways a wonderful thing, like broken-­in shoes. But it can be a huge drag and, if not handled well, can lead beyond boredom and frustration to far darker and more destructive territory. And for couples who want to be together for the long haul in our current era, familiarity is a bigger problem than it has ever been.

The first time I heard anyone offer marital advice, I was terrified. I was a college student in the middle of a disastrous road trip. My friends and I had been trying to get to the mountains in my brother’s ancient minibus, which usually made journeys no longer than up and down our driveway. The poor thing only lasted far enough out of town and late enough into the night that we could not call on anyone we knew for help, so while my friends waited with the vehicle I ventured into the sole open establishment (this was before mobile phones), a local bar, full of workmen at the end of their shift, to find a phone and a tow truck. When I called, the driver told me to wait there.

As I waited, nursing my soda, a patron started talking loudly to nobody in particular, but, in the way of many prophets, to all of us. “Here’s the thing about marriage,” he told the room. “You always end up going back to your f***ing wife, because no other f***ing c**t gives a s**t about you.” (For those guessing, yes, this was in Australia.)

It was a somewhat dark picture of our most celebrated romantic institution, but not completely out of character for the era. For prior generations, marriage was like my brother’s bus; it was not the ideal vehicle for their dreams, but it was what they had. And for many couples—­those more committed to maintenance, or those who chose their target destinations better than I did—­it worked. My mother and father, married an impressive sixty years, never expected their union to be thrilling. I’d have been less shocked to hear my parents speaking elvish than saying “I love you” to each other. Even as a child I noticed the way my mother’s voice flattened when she answered the phone—­Hello!—­ and it turned out to be Dad: “Oh, it’s you. What do you want?” I don’t question their love or commitment, yet just before their fifty-­ninth anniversary, I asked my mother the secret to a long marriage. “Tolerance,” she said, without hesitating.

Belinda Luscombe is an award-winning Time magazine journalist and essayist. Her work has also appeared in The New York Times, Sports Illustrated, and Vogue. She won the Council on Contemporary Families Media Award for her reporting on marriage. She and her husband have been realizing how deeply unsuitable they are for each other but still figuring it out somehow for almost thirty years, often while being laughed at by their two children. 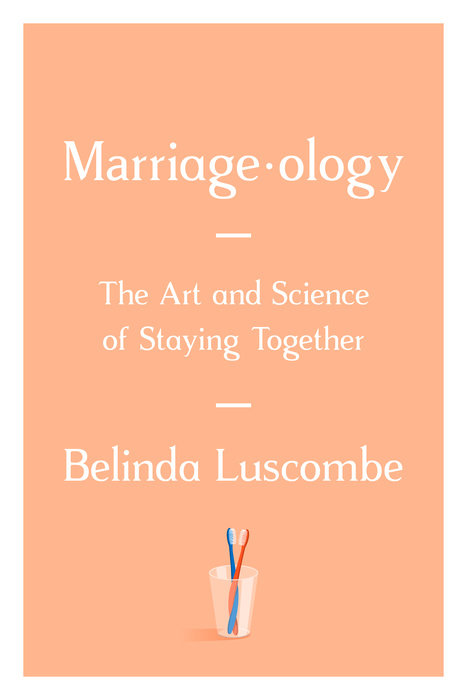