NATIONAL BESTSELLER • The epic, definitive story of Sylvanas Windrunner, one of World of Warcraft’s most enduring and iconic characters, as chronicled by bestselling author Christie Golden.

An excerpt from Sylvanas (World of Warcraft)


“Let me see, let me see!” Vereesa begged. The balcony walls, white and curving as the throat of a swan, were too tall for her to peer over, and Sylvanas sighed. She cast a final longing look at the crowd milling below, then darted back into their chambers for a stool. As Vereesa happily clambered atop it, Sylvanas returned her attention to the scene.

Their parents did host some gatherings—Father said it was “prudent” to do so from time to time—but they were usually small affairs. While Lord Verath Windrunner was one of King Anasterian’s most trusted advisers and his wife, Lireesa, was the ranger-general of Silvermoon, lesser nobles like the ostentatious Lord Saltheril threw much more lavish celebrations. But Lireesa had little patience with pretense and politics, and their quietly brilliant father’s idea of a fine evening was a glass of wine, a good book, and candles to read by.

But today, everything was different. Some of those gathered at the base of the spire were nobility like the Windrunners. Others would have once been considered commoners, but their athleticism, agility, and almost uncanny skills in marksmanship and tracking had elevated them to another sort of nobility. Certainly Sylvanas and her sisters had been raised with respect for and almost awe of the Far striders, and thus far Sylvanas had seen nothing to disabuse her of the notion that they were worthier of respect than someone who’d simply been born with a title.

She had seen many of the Farstriders already for one reason or another, but they had usually come at the ranger-general’s request and interacted little with the rest of the family. Sylvanas was most familiar with Lor’themar Theron. Perhaps because of his white hair, he was one of the few elves who looked older than they were, and he bore himself with the same quiet, elegant dignity that Sylvanas saw in her father. Another Sylvanas had met was a relative newcomer, Halduron Brightwing. He had a cheerful grin and unruly dark blond hair, and he always greeted her and Vereesa if they were present. Like Halduron, the petite Jirri was also a relative newcomer, and clearly quite young if her obvious excitement and wonder at the spire was any indication. The blue-black color of Ranger Vor’athil’s hair made him stand out in a sea that was overwhelmingly gold and silver. Beyond the crowd, Lieutenant Helios spoke quietly to Rangers Lethvalin and Salissa while Ranger Tomathren waited, impatiently, for Helios’s attention.

Talthressar, Rellian, Auric Sunchaser, Alleria’s friend Verana—so many of them. Sylvanas’s heart was racing; she was so excited for what was to transpire that she might as well be the one undergoing the test, not her big sister, Alleria, who stood beside her mother in silence.

Ordinarily, the resemblance between mother and eldest daughter was uncanny. They had the same lean frame, though Alleria was still somewhat gawky on coltish long legs; hair that flowed like melted gold down their backs; the same curve of the mouth when they smiled. But now Lireesa’s belly was round and full, the child growing within due to make its happy appearance sometime in the next few weeks. In this moment, neither woman smiled. What was about to happen was far too serious.

Sylvanas watched Lireesa turn to Alleria and nod. As the two stepped forward, the Farstriders spread out into a circle, with mother and daughter in the center.

The ranger-general’s voice was strong and clear, used to uttering commands in the heat of battle and to having them be obeyed. It carried easily as she addressed the elite unit of the finest rangers in the entire kingdom.

“When I was a young woman, my mother, Alleria, trained me, the eldest child, to become ranger-general, as her mother had before her. Now my daughter, whom I have named after she who bore me, wishes to prove her worthiness and begin formal training. So that all may know that both Alleria and I understand the duty and importance of the position of ranger-general, I have set her a challenge.”

Lireesa turned to her daughter. There was no softening of the older woman’s mien as she spoke.

“Alleria Windrunner. Are you willing to do what is necessary to lead the Farstriders in times of both peace and war?”

“I am.” Alleria’s voice, unusually deep for one so young, betrayed no emotion.

“Then this is your challenge. Listen well. A springpaw lynx has been identified and tagged as your target. Its known territory ranges from Goldenmist Village to Farstrider Enclave. You must find it, slay it with a single arrow, field-dress it, and bring the pelt to me before the last ray of light fades. If you fail any of these charges, you fail the test.”

The ranger-general presented a single arrow to Alleria. “Here is your arrow. May it fly true.”

It was one of Lireesa’s own: uniquely fletched in the colors of green, representing the Farstriders, gold, one of the Windrunner colors, and a natural-hued gold-and-brown feather obtained in one of Lireesa’s legendary battles. Alleria hesitated just an instant before accepting it.

Most wouldn’t have noticed it. But Sylvanas knew her big sister well and frowned slightly. Alleria was a quietly confident young woman, a superlative shot, and an untiring tracker when need be. This should be easy. Springpaws were dangerous to the inexperienced, yes, but all the Windrunner daughters had begun training the instant they were strong enough to pull back the string on a child’s bow.

So why was Alleria worried? Perhaps it was simple nervousness. This wasn’t an ordinary hunt. To fail before not just the rangergeneral but the entire unit of Farstriders would be humiliating.

Alleria placed the arrow in her empty quiver. Sylvanas thought it looked lonely, with none of its fellows surrounding it.

Now Lireesa offered Alleria a knife. It was beautiful; its blade, broad and sharp, as long as Alleria’s hand. The hilt was leather wrapped with golden threads.

“This is your skinning knife,” Lireesa said. “Use it only for its task. Do not use it to attack your quarry. I will examine the pelt afterward, and I will know if you do.”

Alleria nodded, accepting the knife and slipping it into its sheath. Finally, Lireesa placed a small sack in her daughter’s hands.

“Water, bread, and dried meat,” she said. “Enough for a single meal. If you grow hungry, you are permitted to gather food.”

Alleria fastened the pouch securely to her belt.

A small, warm hand, slightly sticky with melon juice, slipped into Sylvanas’s. Still not eye-to-eye with her sister even on a stool, Vereesa asked with a furrowed brow, “Is Lady Sun going to be all right?”

“Of course,” Sylvanas replied, squeezing her hand. “Alleria is going to be just fine. It’s only a springpaw. I bet even you could bring down one of those.”

“Well . . . maybe not right this minute, but very soon.” Beaming, Vereesa returned her attention to the crowd below them. Lireesa placed her hands on her eldest daughter’s shoulders, though the gesture was not affectionate, but firm.

“If you succeed, we will begin the training.”

Alleria squared her shoulders. “Springpaw, I name you prey.” It was a formal phrase, the Farstrider equivalent of a vow. 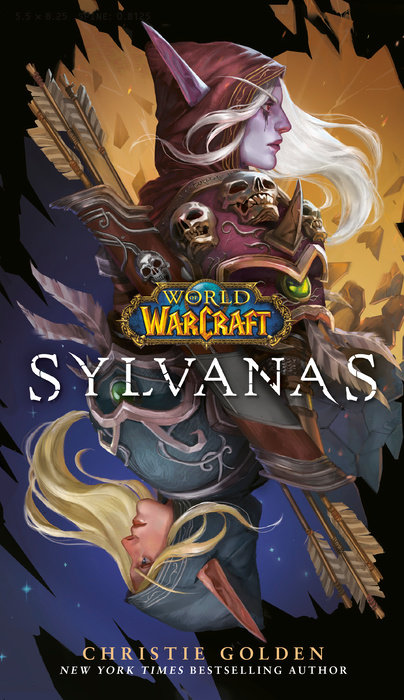