Two wildly different women—one a grifter, the other an heiress—are brought together by the scam of a lifetime in a page-turner from the New York Times bestselling author of Watch Me Disappear.

An ID Book Club Selection • “Pretty Things is awesome. Simple as that. I loved every page. Janelle Brown is your new must-read author.”—Harlan Coben, New York Times bestselling author of Run Away

Nina once bought into the idea that her fancy liberal arts degree would lead to a fulfilling career. When that dream crashed, she turned to stealing from rich kids in L.A. alongside her wily Irish boyfriend, Lachlan. Nina learned from the best: Her mother was the original con artist, hustling to give her daughter a decent childhood despite their wayward life. But when her mom gets sick, Nina puts everything on the line to help her, even if it means running her most audacious, dangerous scam yet.

Vanessa is a privileged young heiress who wanted to make her mark in the world. Instead she becomes an Instagram influencer—traveling the globe, receiving free clothes and products, and posing for pictures in exotic locales. But behind the covetable façade is a life marked by tragedy. After a broken engagement, Vanessa retreats to her family’s sprawling mountain estate, Stonehaven: a mansion of dark secrets not just from Vanessa’s past, but from that of a lost and troubled girl named Nina.

Nina’s, Vanessa’s, and Lachlan’s paths collide here, on the cold shores of Lake Tahoe, where their intertwined lives give way to a winter of aspiration and desire, duplicity and revenge.

This dazzling, twisty, mesmerizing novel showcases acclaimed author Janelle Brown at her best, as two brilliant, damaged women try to survive the greatest game of deceit and destruction they will ever play.

An excerpt from Pretty Things

The nightclub is a temple, devoted to the sacred worship of indulgence. Inside these walls there is no judgment: You’ll find no populists, no protestors, no spoilsports who might ruin the fun. (The velvet ropes out front stand sentry against all that.) Instead, there are girls in fur and designer silk, swanning and preening like exotic birds, and men with diamonds in their teeth. There are fireworks erupting from bottles of thousand-­dollar vodka. There is marble and leather and brass that is polished until it gleams like gold.

The DJ drops a bass beat. The dancers cheer. They lift their phones toward the sky and vamp and click, because if this is a church then social media is their scripture; and that tiny screen is how they deify themselves.

Here they are: the one percent. The young and ultra-­rich. Billionaire babies, millionaire millennials, fabu-grammars. “Influencers.” They have it all and they want the whole world to know. Pretty things, so many pretty things in the world; and we get them all, says their every Instagram photo. Covet this life, for it is the best life, and we are #blessed.

Out there, in the middle of it all, is a woman. She’s dancing with abandon in a spot where the light hits her just so and glimmers on her skin. A faint sheen of sweat dampens her face; her glossy dark hair whips around her face as she swivels her body to the grinding beat. The waitresses headed to the bottle-­service tables have to maneuver around her, the fizzing sparklers on their trays in danger of setting the woman’s hair alight. Just another L.A. party girl, looking for a good time.

Look close, though, and you can see that her half-­closed eyes are sharp and alert, dark with watching. She is watching one person in particular, a man at a table a few feet away.

The man is drunk. He lounges in a booth with a group of male friends—­gelled hair, leather jackets, Gucci sunglasses at night; twentysomethings who shout over the music in broken English and baldly leer at the women who careen past. Occasionally, this man will plunge his face to the table to do a line of cocaine, narrowly missing the flotilla of empty glasses that litter its surface. When a Jay-­Z song comes on, the man climbs up on the seat of his banquette and shakes up a giant bottle of champagne—­a rare large-­format bottle of Cristal—­and then sprays it over the heads of the crowd. Girls shriek as $50,000 worth of bubbly ruins their dresses and drips to the floor, making them slip in their heels. The man laughs so hard he nearly falls down.

A waitress lugs over a replacement bottle of champagne, and as she sets it on the table the man slips his hand right up under her skirt as if he’s purchased her along with the bottle. The waitress blanches, afraid to push him off lest she lose what promises to be a sizable tip: her rent for the month, at the very least. Her eyes rise helplessly to meet those of the dark-­haired woman who is still dancing a few feet away. And this is when the woman makes her move.

She dances toward the man and then—­oops!—­she trips and falls right into him, dislodging his hand from the waitress’s crotch. The waitress, grateful, flees. The man swears in Russian, until his eyes focus enough to register the windfall that has just landed in his lap. Because the woman is pretty—­as all the women here must be in order to get past the bouncers—­dark-­featured and slight, maybe a hint of Spanish or Latina? Not the sexiest girl in the club, not the most ostentatious, but she’s well dressed, her skirt suggestively short. Most important: She doesn’t blink as the man swiftly shifts his attention to her; doesn’t react at all to the possessive hand on her thigh, the sour breath in her ear.

Instead, she sits with him and his friends, letting him pour her champagne, sipping it slowly even as the man puts back another half-­dozen drinks. Women come and go from the table; she stays. Smiling and flirting, waiting for the moment when the men are all distracted by the arrival of a tabloid-friendly basketball star a few tables over; and then she swiftly and silently tips the contents of a clear vial of liquid into the man’s drink.

A few minutes pass as he finishes his drink. He pushes back from the table, working to upright himself. This is when she leans in and kisses him, closing her eyes to push away her revulsion as his tongue—­a thick, chalky slug—­robes hers. His friends goggle and jeer obscenities in Russian. When she can’t take it anymore, she pulls back and whispers something in his ear, then stands, tugging at his hand. Within a few minutes they are on their way out of the club, where a valet jumps to attention and conjures up a banana-­yellow Bugatti.

But the man is feeling odd now, on the verge of collapse; it’s the champagne or the cocaine, he’s not sure which, but he finds he can’t object when the woman tugs the keys from his hand and slips behind the wheel herself. Before he passes out in the passenger seat, he manages to give her an address in the Hollywood Hills.

The woman carefully maneuvers the Bugatti up through the streets of West Hollywood, past the illuminated billboards selling sunglasses and calfskin purses, the buildings with fifty-­foot-­tall ads hawking Emmy-­nominated TV series. She turns up the quieter winding roads that lead to Mulholland, white-­knuckling it the whole time. The man snores beside her and rubs irritably at his crotch. When they finally get to the gate of his house, she reaches over and gives his cheek a hard pinch, startling him awake so that he can give her the code for entry.

The gate draws back to reveal a modernist behemoth, with walls entirely of glass, an enormous translucent birdcage hovering over the city.

It takes some effort to coax the man out of the passenger seat, and the woman has to prop him upright as they walk to the door. She notes the security camera and steps out of its range, then notes the numbers that the man punches into the door’s keyless entry. When it opens, the pair is greeted by the shrieking of a burglar alarm. The man fumbles with the alarm keypad and the woman studies this, too.

Inside, the house is cold as a museum, and just as inviting. The man’s interior decorator has clearly been given the mandate of “more is more” and emptied the contents of a Sotheby’s catalog into these rooms. Everything is rendered in leather and gold and glass, with furniture the size of small cars positioned under crystal chandeliers and art clogging every wall. The woman’s heels clack on marble floors polished to a mirror gleam. Through the windows, the lights of Los Angeles shimmer and pulse: the lives of the common people below on display as this man floats here in the sky, safely above it all.

The man is slipping back into oblivion as the woman half drags him through the cavernous home in search of his bedroom. She finds it up a set of stairs, a frigid white mausoleum with zebra skin on the floors and chinchilla on the pillows, overlooking an illuminated pool that glows like an alien beacon in the night. She maneuvers him to the bed, dropping him onto its rumpled sheets just moments before he rolls over and vomits. She leaps back so that the mess doesn’t splash her sandals, and regards the man coolly.

Once he’s passed out again, she slips into the bathroom and frantically scrubs her tongue with toothpaste. She can’t get his taste out of her mouth. She shudders, studies herself in the mirror, breathes deeply.

Back in the bedroom, she tiptoes around the vomit puddle on the floor, pokes the man with a tentative finger. He doesn’t respond. He’s pissed the bed.

That’s when her real work begins. First, to the man’s walk-­in closet, with its floor-­to-­ceiling displays of Japanese jeans and limited-­edition sneakers; a rainbow of silk button-­downs in ice cream colors; fine-­weave suits still in their garment bags. The woman zeroes in on a glass-­topped display table in the center of the room, under which an array of diamond-­encrusted watches gleam. She pulls a phone out of her purse and snaps a photo.

Janelle Brown is the author of All We Ever Wanted Was Everything and This Is Where We Live. An essayist and a journalist, she has written for Vogue, The New York Times, Elle, Wired, Self, the Los Angeles Times, Salon, and numerous other publications. She lives in Los Angeles with her husband and their two children. 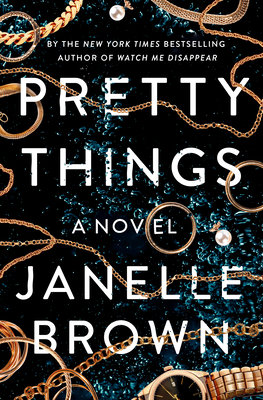