A Memoir of American Diplomacy and the Case for Its Renewal

“Bill Burns is a treasure of American diplomacy.”—Hillary Clinton

“The Back Channel shows how diplomacy works, why it matters, and why its recent demise is so tragic.”—Walter Isaacson, author of Leonardo da Vinci

Over the course of more than three decades as an American diplomat, William J. Burns played a central role in the most consequential diplomatic episodes of his time—from the bloodless end of the Cold War to the collapse of post–Cold War relations with Putin’s Russia, from post–9/11 tumult in the Middle East to the secret nuclear talks with Iran.

In The Back Channel, Burns recounts, with novelistic detail and incisive analysis, some of the seminal moments of his career. Drawing on a trove of newly declassified cables and memos, he gives readers a rare inside look at American diplomacy in action. His dispatches from war-torn Chechnya and Qaddafi’s bizarre camp in the Libyan desert and his warnings of the “Perfect Storm” that would be unleashed by the Iraq War will reshape our understanding of history—and inform the policy debates of the future. Burns sketches the contours of effective American leadership in a world that resembles neither the zero-sum Cold War contest of his early years as a diplomat nor the “unipolar moment” of American primacy that followed.

Ultimately, The Back Channel is an eloquent, deeply informed, and timely story of a life spent in service of American interests abroad. It is also a powerful reminder, in a time of great turmoil, of the enduring importance of diplomacy.

Advance praise for The Back Channel

“Bill Burns is simply one of the finest U.S. diplomats of the last half century. The Back Channel demonstrates his rare and precious combination of strategic insight and policy action. It is full of riveting historical detail but also, more important, shrewd insights into how we can advance our interests and values in a world where U.S. leadership remains the linchpin of international order.”—James A. Baker III

“From one of America’s consummate diplomats, The Back Channel is an incisive and sorely needed case for the revitalization of diplomacy—what Burns wisely describes as our ‘tool of first resort.’”—Henry Kissinger

“Burns not only offers a vivid account of how American diplomacy works, he also puts forward a compelling vision for its future that will surely inspire new generations to follow his incredible example.”—Madeleine K. Albright

An excerpt from The Back Channel

Apprenticeship: The Education of a Diplomat

My first diplomatic mission was an utter failure. The most junior officer in our embassy in Jordan in 1983, I eagerly volunteered for what at the time seemed like a straightforward assignment: to drive a supply truck from Amman to Baghdad. It all seemed to me like an excellent adventure, a chance to see the thinly populated, rock-strewn desert of eastern Jordan, and visit Iraq, then in the midst of a brutal war with Iran.

The senior administrative officer at Embassy Amman was a grizzled veteran renowned for his ability to get things done, if not for his willingness to explain exactly how he accomplished them. He assured me the skids had been greased at the Iraqi border: Getting across would be no problem. The seven-hour drive to the border went uneventfully. Then, at the little Iraqi town of Rutba, adventure met Saddam Hussein–era reality. The skids, it turned out, had not been greased. An unamused security official rejected my paperwork and ordered me to remain in the truck while he consulted with his superiors in Baghdad.

I spent a cold, sleepless night in the cab of the truck, incapable (in that pre-cellphone age) of communicating my predicament to my colleagues in Amman or Baghdad, and increasingly worried that my diplomatic career would not survive its first year. At first light, an Iraqi officer informed me that I’d be proceeding to Baghdad under police escort. He allowed me one brief phone call from the local post office to the on-duty Marine security guard at Embassy Amman. I explained what had happened, and he was able to convey to my colleagues in Baghdad the circumstances of my delay.

With a dour policeman who introduced himself as Abu Ahmed beside me, I began the long drive through many of the dusty towns of Anbar Province that America’s Iraq wars would make all too well known—Ramadi, Fallujah, Abu Ghraib. My travel partner had an unnerving habit of idly spinning the chamber on his revolver as we drove along the rutted highway. At one point he pulled out a popular regional tabloid with the cast of Charlie’s Angels on the cover. “Do all American women look like this?” he asked.

As the late afternoon sun was beginning to fade, we stopped for gas and tea at a ramshackle rest stop run by two of his brothers, just outside Fallujah, his hometown. As we sipped our tea, sitting on wobbly plastic chairs, Abu Ahmed’s nieces and nephews appeared to see the exotic American. I’ve always wondered what happened to them over the tumultuous decades that followed.

Abu Ahmed and I, weary and running out of things to talk about, finally arrived at a large police compound on the northwestern outskirts of Baghdad in early evening. I was relieved to see an American colleague waiting for me; I was less relieved to learn that the Iraqis refused to accept our customs documents and insisted on confiscating the truck and its cargo. There was nothing particularly sensitive in the truck, but losing a dozen computers, portable phones, and other office and communication equipment was an expensive proposition for a State Department always strapped for resources. We protested, but got nowhere.

My colleague made clear that he’d take this up with the Foreign Ministry, which elicited barely a shrug from the police. Now separated from the truck and released by the police, I went back to our modest diplomatic facility and told my story over a few beers. The next day, I flew back to Amman. As far as I know, neither our truck nor our equipment was ever returned.

A life in diplomacy seems more natural in retrospect than it did when I was stumbling along from Amman to Baghdad all those years ago, learning my first lesson in professional humility. But public service was already in my blood. I grew up as an Army brat, the product of an itinerant military childhood that took my family from one end of the United States to the other, with a dozen moves and three high schools by the time I was seventeen.

My father and namesake, William F. Burns, fought in Vietnam in the 1960s and eventually became a two-star general and the director of the U.S. Arms Control and Disarmament Agency. He was an exemplary leader, thoughtful and exacting, someone whose high standards and model of public service I always wanted to approach. “Nothing can make you prouder,” he once wrote to me, “than serving your country with honor.” His was a generation accustomed to taking American leadership in the world seriously; he knew firsthand the dangers of ill-considered military conflicts, and what diplomacy could achieve in high-stakes negotiations. My mother, Peggy, was the devoted heart of our family. Her love and selflessness made all those cross-country moves manageable, and held us all together. Like my dad, she grew up in Philadelphia. They met in the chaste confines of a Catholic high school dance—with nuns wielding rulers to enforce “six inches for the Holy Spirit” between them—and built a happy life shaped by faith, family, and hard work.

Making our close-knit Irish Catholic family whole were my three brothers: Jack, Bob, and Mark. As in many Army families, constantly bouncing from post to post, we became our own best friends. We shared a love of sports across seasons and places, and looked out for one another on all those first days in new schools.

My upbringing bore little resemblance to the caricature of the cosmopolitan, blue-blooded foreign service officer. Through the years, however, a few useful diplomatic qualities began to emerge in faint outline. Because we moved so often, I became adaptable, constantly (and sometimes painfully) adjusting to new environments. I grew curious about new places and people, increasingly accustomed to trying to put myself in their shoes and understand their perspectives and predispositions. I developed a detachment about people and events, an ability to stand back and observe and empathize, but also a reluctance—born of many departures—to get too close or too invested. I also came to know my own country well, with a feel for its physical expanse and beauty, as well as its diversity and bustling possibility. I grew up with not only an abiding respect for the American military and the rhythms of Army life, but a vaguely formed interest of my own in public service.

In 1973, I went to La Salle College on an academic scholarship, my dreams of a basketball scholarship long since surrendered to the hard realities of limited talent. A small liberal arts school run by the Christian Brothers in a rough neighborhood in North Philadelphia, La Salle offered a valuable education inside and outside the classroom. It was then a school with lots of first-generation college students, mostly commuters, who worked hard to earn their tuition, took nothing for granted, and prided themselves on puncturing pretension. La Salle, like Philadelphia in the 1970s, was not for the faint of heart.

William J. Burns is president of the Carnegie Endowment for International Peace. He retired from the U.S. Foreign Service in 2014 after a thirty-three-year diplomatic career. He holds the highest rank in the Foreign Service, career ambassador, and is only the second serving career diplomat in history to become deputy secretary of state. Prior to his tenure as deputy secretary, Ambassador Burns served from 2008 to 2011 as undersecretary for political affairs. He was ambassador to Russia from 2005 to 2008, assistant secretary of state for near eastern affairs from 2001 to 2005, and ambassador to Jordan from 1998 to 2001. Ambassador Burns earned a bachelor’s degree in history from La Salle University and master’s and doctoral degrees in international relations from Oxford University, where he studied as a Marshall Scholar. He and his wife, Lisa, have two daughters.

A Memoir of American Diplomacy and the Case for Its Renewal 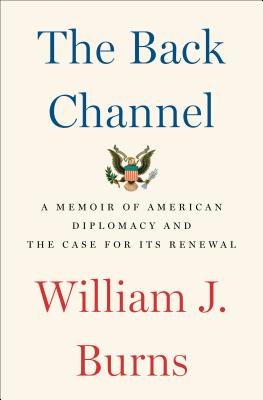