An urgent manifesto and a dramatic memoir of awakening, this is the story of revolutionary love.

Finalist for the Dayton Literary Peace Prize • “In a world stricken with fear and turmoil, Valarie Kaur shows us how to summon our deepest wisdom.”—Elizabeth Gilbert, author of Eat Pray Love

How do we love in a time of rage? How do we fix a broken world while not breaking ourselves? Valarie Kaur—renowned Sikh activist, filmmaker, and civil rights lawyer—describes revolutionary love as the call of our time, a radical, joyful practice that extends in three directions: to others, to our opponents, and to ourselves. It enjoins us to see no stranger but instead look at others and say: You are part of me I do not yet know. Starting from that place of wonder, the world begins to change: It is a practice that can transform a relationship, a community, a culture, even a nation.

Kaur takes readers through her own riveting journey—as a brown girl growing up in California farmland finding her place in the world; as a young adult galvanized by the murders of Sikhs after 9/11; as a law student fighting injustices in American prisons and on Guantánamo Bay; as an activist working with communities recovering from xenophobic attacks; and as a woman trying to heal from her own experiences with police violence and sexual assault. Drawing from the wisdom of sages, scientists, and activists, Kaur reclaims love as an active, public, and revolutionary force that creates new possibilities for ourselves, our communities, and our world. See No Stranger helps us imagine new ways of being with each other—and with ourselves—so that together we can begin to build the world we want to see.

An excerpt from See No Stranger

In the beginning, there was wonder. Out in the country, far from city lights, the night air was clear enough to gaze into the long shimmering galaxy that stretched across the sky. I would stand in the field behind our house and talk to the stars like they were my friends, just like I talked to the cows over the fence or the horses across the road. Once, while playing in a stream, I saw a butterfly dancing over the water and put out my finger and asked it to come to me—­and the butterfly came. It perched on my finger for a long time, long enough for me to peer closer at its wings and praise it before it flew away. Back then, there was no question: The earth under me, the stars above me, the animals around me, were all part of me. And wonder was my first orientation to them all, the thing that connected me to them: You are a part of me I do not yet know.

I grew up on forty acres in Clovis, California, where the land stretched on all sides of us like an open palm. We were surrounded by peach orchards, orange trees, eucalyptus groves, strawberry fields, and olive trees that my father’s father had planted along our dirt road. My family had farmed this land for nearly a century. My little brother and I would run through the fields, play in muddy ditches, and drink at the water pump in front of the two-­room wooden cabin my father was born in. In the summers, my mother and I would walk the orchards collecting fruit in our shirts, stepping over apricots that had fallen to the ground and spoiled because the fruit was that plentiful. In the winters, when the tule fog rolled into the valley, my father would pull me up onto our tractor and I would sit at his side like a princess as we disked the fields until the sky darkened over the Sierra Nevada mountains. We belonged to the land.

At night, my grandfather, my mother’s father, would tuck me into bed. With his hand on my forehead, stroking my hair, he recited his favorite prayer, the shabad called Tati Vao Na Lagi. The hot winds cannot touch you. There was a tremor in Papa Ji’s voice, just as there was a tremor in his hands, and the tremor rose and fell in an arc that rocked me to sleep as he hummed the shabad. Papa Ji was always humming—­while surveying the tomatoes in his garden, arms clasped behind his back like the army captain he had once been; while sitting at the kitchen table, cutting ice cream into slices like a cake; while tying his turban in the mornings, slowly and carefully, as if each layer contained secret histories; he was always humming. The sacred music resounded within him, spilling out when he parted his lips.

“Do you dream?” I asked Papa Ji one night.

“What did you dream last night?”

“I was a young man on the beaches of Gaza, and I was running fast like I used to run. My superior officer, British, challenged me to a race, and I was winning,” he said and laughed. Papa Ji was wondrous to me, as infinite and inexhaustible as the night sky. He had worlds of stories in him, ancient stories he would bequeath to me in slivers—­stories of gurus and saints, warriors and poets, soldiers and farmers—­and these stories formed a long shimmering history that spanned centuries from India to America and ended with me.

My favorite was our origin story: the story of Guru Nanak, the first teacher of the Sikh faith. Five centuries ago, the story goes, halfway around the world in a village in Punjab on the Indian subcontinent, there lived a young man named Nanak. He was deeply troubled by the violence around him, Hindus and Muslims in turmoil. One day, he disappeared on the bank of a river for three days. People thought he was dead, drowned. But Nanak emerged on the third day with a vision of Oneness: Ik Onkar, the Oneness of humanity and of the world. This vision threw him into a state of ecstatic wonder—­vismaad—­and he began singing songs of devotion called shabads, praising the divine within him and around him. In other words, he was in love. Love made him see with new eyes: Everyone around him was a part of him that he did not yet know.

“I see no stranger,” said Guru Nanak, “I see no enemy.” Guru Nanak taught that all of us could see the world in this way. There is a voice inside each of us called haumai, the I that names itself as separate from You. It resides in the bowl that holds our individual consciousness. But separateness is an illusion. When we quiet the chatter in our heads through music or meditation or recitation or song, the boundaries begin to disappear. The bowl breaks. For a moment, we taste the truth, sweet as nectar—­we are part of one another. Joy rushes in. Long after the moment passes, we can choose to remember the truth of our interconnectedness, that we belong to one another. We can choose to “see no stranger.” When Papa Ji was humming the shabads day and night, he was not praying as much as practicing a constant communion with all things. It was his way of remembering the truth—rehearsing his wonder.

Wondrous are the beings who wander around unclothed.

Wondrous is the fire, which works wonders. . . .

Beholding these wonders, I am wonderstruck.

O Nanak, those who understand this are blessed.

“Waheguru, Waheguru!” Papa Ji would say. It was our word for God, but he would say it throughout the day like it was a deep breath. “Wahe” is an expression of awe, and “guru” is the light that dispels darkness. So even God’s name was an expression of wonder at the divine around us and within us.

“Look at the hose!” Papa Ji would exclaim, spraying water into the sunlight, making rainbows. “Kamal hai!” Isn’t that amazing? My brother, Sanjeev, and I would rush through the rainbows, but Papa Ji was teaching us a lesson, to cultivate our orientation to wonder. When our father came home from irrigating the fields, we would sit close to him as he drew pictures of the solar system on a chalkboard and talked about the universe, his voice rising with excitement: “The sun’s light takes exactly eight minutes and twenty seconds to reach us! The light of faraway stars reaches us long after they have died!” When it thundered, our mother would cry out in joy and pull us outside with her to dance in the rain, mouths open to catch raindrops, just like during the monsoons of her childhood. When I wrote little poems about the rain or stars or land, Papa Ji kept them all in a special red binder. On weekends, our cousins and aunties and uncles and grandparents, who all lived on the land with us, would come over to eat and dance together in the night, bhangra beats pounding through our bodies, fingers sticky from pakoras, sparks flying from the fire. On the farmland of California, under the stars, inside the music of my enormous family, the stories of my ancestors, and the sounds of my grandfather’s prayers, I was at home in my body and at home in the world.


Wonder is our birthright. It comes easily in childhood—­the feeling of watching dust motes dancing in sunlight, or climbing a tree to touch the sky, or falling asleep thinking about where the universe ends. If we are safe and nurtured enough to develop our capacity to wonder, we start to wonder about the people in our lives, too—­their thoughts and experiences, their pain and joy, their wants and needs. We begin to sense that they are to themselves as vast and complex as we are to ourselves, their inner world as infinite as our own. In other words, we are seeing them as our equal. We are gaining information about how to love them. Wonder is the wellspring for love.

The call to love beyond our own flesh and blood is ancient. It echoes down to us on the lips of indigenous leaders, spiritual teachers, and social reformers through the centuries. Guru Nanak called us to see no stranger, Buddha to practice unending compassion, Abraham to open our tent to all, Jesus to love our neighbors, Muhammad to take in the orphan, Mirabai to love without limit. They all expanded the circle of who counts as one of us, and therefore who is worthy of our care and concern. These teachings were rooted in the linguistic, cultural, and spiritual contexts of their time, but they spoke of a common vision of our interconnectedness and interdependence. It is the ancient Sanskrit truth that we can look upon anyone or anything and say: Tat tvam asi, “I am that.” It is the African philosophy: Ubuntu, “I am because you are.” It is the Mayan precept: In La’Kech, “You are my other me.”

Valarie Kaur is a civil rights activist, lawyer, filmmaker, innovator, and founder of the Revolutionary Love Project. She has won national acclaim for her story-based advocacy, helping to win policy change on issues ranging from hate crimes to digital freedom. Her speeches have reached millions worldwide and inspired a movement to reclaim love as a force for justice. A daughter of Sikh farmers in California, she earned degrees from Stanford University, Harvard Divinity School, and Yale Law School and holds an honorary doctorate. She lives in a multigenerational home in Los Angeles with her husband, son, and daughter. 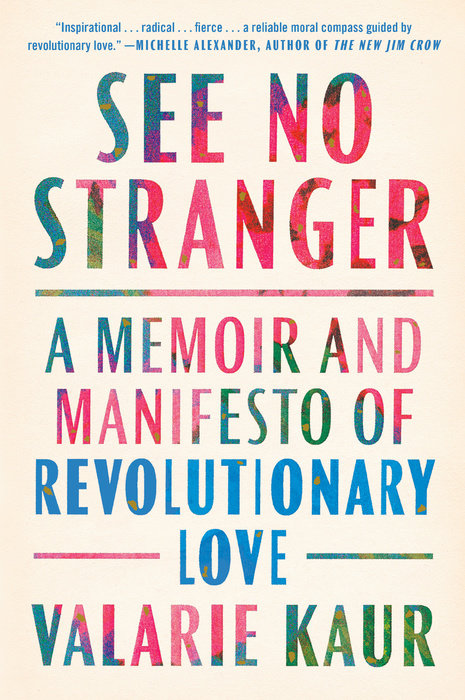