“A gorgeous memoir about mothers, daughters, and the tenacity of the love that grows between what is said and what is left unspoken.”—Mira Jacob, author of Good Talk

If our family stories shape us, what happens when we learn those stories were never true? Who do we become when we shed our illusions about the past?

Maya Shanbhag Lang grew up idolizing her brilliant mother, an accomplished physician who immigrated to the United States from India and completed her residency all while raising her children and keeping a traditional Indian home. Maya’s mother had always been a source of support—until Maya became a mother herself. Then the parent who had once been so capable and attentive became suddenly and inexplicably unavailable. Struggling to understand this abrupt change while raising her own young child, Maya searches for answers and soon learns that her mother is living with Alzheimer’s.

Unable to remember or keep track of the stories she once told her daughter—stories about her life in India, why she immigrated, and her experience of motherhood—Maya’s mother divulges secrets about her past that force Maya to reexamine their relationship. It becomes clear that Maya never really knew her mother, despite their close bond. Absorbing, moving, and raw, What We Carry is a memoir about mothers and daughters, lies and truths, receiving and giving care, and how we cannot grow up until we fully understand the people who raised us. It is a beautiful examination of the weight we shoulder as women and an exploration of how to finally set our burdens down.

Praise for What We Carry

"Part self-discovery, part family history. . . [Lang's] analysis of the shifting roles of mothers and daughters, particularly through the lens of immigration, help[s] to challenge her family’s mythology. . . . Readers interested in examining their own family stories . . . will connect deeply with Lang’s beautiful memoir."—Library Journal
(Starred Review)

“A stirring memoir exploring the fraught relationships between mothers and daughters . . . astutely written and intense . . . [What We Carry] will strike a chord with readers.”—Publishers Weekly

“Lang is an immediately affable and honest narrator who offers an intriguing blend of revelatory personal history and touching insight.”—BookPage

An excerpt from What We Carry

I am six months pregnant, living in a city that feels utterly alien to me, talking on the phone, as I so often do, with my mother. Talking to her makes me feel less isolated, more assured, though on this particular day our conversation takes a strange turn.

“I am thinking of taking an easier job,” she says, “now that I am old.”

“I must face reality. I can no longer be who I was.”

I go quiet, unsure if I am supposed to argue with her or not.

My mom has a history of abrupt decisions. Ten years earlier, when I was in college, she divorced my dad after nearly thirty years of marriage, a shock to our Indian family. She quit her job and moved from Long Island to the unknown suburbs of New Jersey. These decisions weren’t bad ones—­I’d wanted her to divorce my dad for some time—­but they were startling for the way she did them, all at once. “Why New Jersey?” I asked from my dorm room. It was all I could think to say. “It will be good for work,” she replied. She was right. She landed a dream position running clinical trials for pharmaceutical companies and was happier than I had ever seen her.

However perplexing, her decisions have always worked out. Who am I to doubt her? When I was a girl, there was once a car accident on our street, a motorcyclist flung onto a neighbor’s lawn. My mom rushed outside and took control of the scene. This is how I picture her, a doctor radiating authority, even in a nightgown. She is the most capable person I know. I may not always understand her, but I have complete faith in her.

A week after that phone call, she gives notice. Her boss is stunned. He offers to reduce her hours, eliminate travel, hire assistants, all to no avail. She has already applied for a position at a state hospital. “A state hospital!” her boss cries. “You’ll be bored to tears!”

My mom sounds pleased when she shares his reaction with me. She is up against a wall no one else can see, which is more or less her ideal state.

“What if you don’t get the job at the hospital?” I ask nervously.

“Is this what you want?”

Such are my mother’s pronouncements.

“This way I will have a pension. If I am ever in a nursing home, those places are so expensive, you would not believe.”

Off she goes citing statistics. I picture her absorbing the numbers through her reading glasses. She is far­sighted: eyes like a hawk for distance, but unable to see anything up close. This applies not only to reading.

An immigrant, she came to this country for her children. Throughout my childhood, she fixated on the costs of sending me and my brother to college. If my outgrown jeans showed ankle, she told me to wear longer socks. “Everyone at school thinks I’m poor,” I mumbled. “Let them think that,” she snapped. “Their parents will have credit card debt to go with their nice jeans.”

In the distance, she sees her goals. She funnels herself toward them. She scowls if anyone suggests alternatives. Help and convenience are to be batted away.

A few days later, she gets the job at the state hospital, just as predicted. This is the thing about my mom: She may be cryptic, but she is always right.

“I don’t know if I should congratulate you,” I confess.

“Maybe you’ll be able to visit me more, with a less demanding job.”

She chuckles. “That would be nice. What matters is my pension. I do not want to burden my children!”

So it goes between us. Everything she does is for my benefit. This is what a mother’s love looks like to me. It looks like suffering.

I accept it. I am about to become a mom three thousand miles away from her, in a gray, drizzly city that feels wholly unfamiliar. Soon, I will be the one putting my needs last. It helps to believe that somewhere in the world, I still come first.

Before moving to Seattle, my husband, Noah, and I lived in Manhattan. We had grown tired of the city—­exorbitant rents, minuscule apartments—­and were at a crossroads in our careers.

I was about to complete my PhD in comparative literature. I was no scholar, but I was happy enough pretending to be one. I got to read books all day. It felt like a grand luxury.

I wasn’t sure, however, what to do with my degree. I didn’t want to apply for tenure-­track positions. I’d wanted a PhD for the same reason I’d ever done anything: to be impressive. At twenty-­eight, I had a series of stints behind me. I’d been pre-­med, then a management consultant, then an academic. I had leapt from one role to the next. None fit.

Noah, four years older than me and from Southern California, was working as a lawyer at a big firm, a glamorous–sounding job he loathed. He hated watching partners yell at secretaries, the lack of women and minorities in positions of power, and the fact that many of the companies he defended (tobacco and chemical conglomerates) deserved, in his mind, to be sued. Noah’s conscience was one of the reasons I fell for him. He grew up poor. He didn’t want his future kids to go without health insurance the way he had. His pragmatism and conscience butt heads in his work.

The funny thing is that because Noah grew up poor and Jewish, we understood each other perfectly, though I had been neither of those things. He understood why I felt guilty buying a nice pair of jeans. I understood why he felt excluded at Christmas. We had both been shaped by guilt and frugality and a complicated shame. We were the kids who had shown up to school with our textbooks wrapped in brown paper bags. We knew what it was like to be on the outside, looking in.

We also learned what it was like to be on the inside, looking out. We had escaped our pasts. Noah’s family never expected him to put himself through law school or move to New York City. My Indian parents never imagined that it was acceptable to read books all day. We had proved them wrong. We had made it. Yet no matter how impressive our jobs (a lawyer at a big firm) or achievements (a PhD at twenty-­eight), we felt like misfits. We didn’t really belong.

When Noah was offered a job as in-­house counsel at Nintendo while I defended my dissertation, the timing seemed perfect. Here was a chance for him to join a feel-­good company, for us to leave Manhattan, and, best of all, for me to duck the question of what to do with my life. We were moving across the country! It was like being handed an alibi.

We packed our small apartment into our car and headed west. Our dog, Lola, a black Lab mix, sniffed curiously at the fresh air from the back seat. We had just put an offer on a house, something we had no experience doing. We were filled with conjecture about what it would be like to be homeowners. Any concerns came from Noah. I was in charge of the giddiness. “Relax!” I told him. “We’re going to love it.”

Were we? He raised some good points. We didn’t know Seattle well. I had pushed us into buying a house because I wanted something to show for myself. When friends said, “You bought a house already?” I felt a little better.

I didn’t have a job. I didn’t have a plan. Beneath my enthusiasm, I was filled with doubt. Never before had I uprooted like this. It was the sort of all-­in move my mom would make. I thought about how her gambles always worked out. I wanted to believe that if I sounded confident the way she did, if I laughed off concerns, I would land on my feet just like her.

Maya Shanbhag Lang is the author of What We Carry, named a New York Times Editors’ Choice, a “Good Morning America” Mother's Day pick, and a Must-Read/Best of 2020 Memoir by Bustle, BookRiot, Parade, Times of India, and others. She is also the author of The Sixteenth of June, long listed for The Center for Fiction First Novel Prize and named a Must-Read Novel by CBS and InStyle. Her work has been featured in The New York Times, The Washington Post, The Los Angeles Review of Books, and others. She holds a PhD in Comparative Literature, received the Neil Shepard Prize in Fiction, and is the daughter of South Asian immigrants. She can be found on Instagram at @mayaslang. 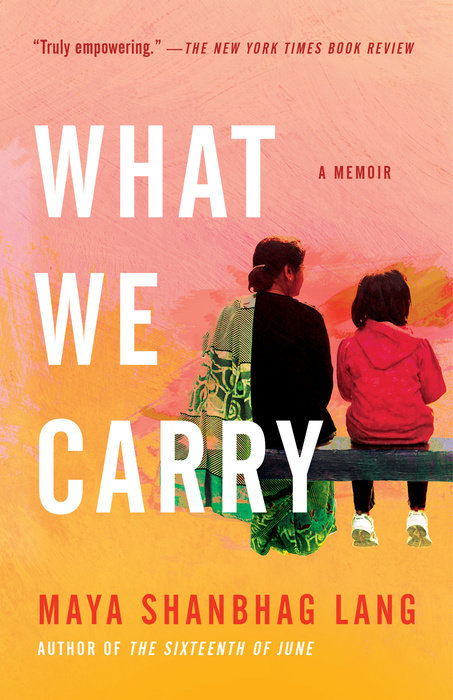