Can’t get enough of The Crown? In this must-have exploration of the history behind seasons 2 and 3 of Peter Morgan’s Emmy-winning Netflix drama, the show’s historical consultant answers all your questions alongside beautifully reproduced archival photographs.

In this eye-opening companion to seasons 2 and 3 of Netflix’s acclaimed series The Crown, renowned biographer and historical consultant Robert Lacey takes us through the real history that inspired the drama.

Covering two tumultuous decades in the reign of Queen Elizabeth II, Lacey looks at the key social, political, and personal moments and their effects—not only on the royal family but also on the world around them. From the Suez Crisis and the U.S.–Soviet space race to the legacy of the Duke of Windsor’s collaboration with Hitler, along with the rumored issues with the royal marriage, the book provides a thought-provoking insight into the historic decades that the show explores, revealing the truth behind the on-screen drama.

Fascinating and fast-paced, this is a unique look behind the history that inspired the show and the years that would prove to be the making of the Queen.

The Crown is now available to watch on Netflix.

The Crown is produced by Left Bank Pictures in association with Sony Pictures Television for Netflix.

An excerpt from The Crown: The Official Companion, Volume 2

The Crown moves on … in the first volume of our Inside History we followed Queen Elizabeth II from her childhood through to love and marriage, savouring the hidden history of her coronation and her early years of apprenticeship with Winston Churchill – as based on the first ten episodes (101–110) of The Crown Season 1.

Now, in Seasons 2 and 3, the Queen must work with prime ministers who are shadows of the great man – the devious Anthony Eden and Harold ‘Supermac’ Macmillan, as well as with Alec Douglas-Home, whose mistakes paved the way for Harold Wilson, the most successful Labour Prime Minister of Elizabeth’s reign. Twenty Netflix episodes (201–210 and 301–310) and 20 matching chapters (One to Twenty) of this book will transport us from the Suez Crisis of 1956 to the Silver Jubilee celebrations of 1977, a saga of intrigue, tragedy, more royal babies – and, this being the Cold War, a surprising amount of trouble with spies.

This book, volume 2, tracks the history of the still-maturing Elizabeth II through the second phase of her reign as she feels her way towards more confident regality, while her country stumbles quite dramatically, losing hold of the self-assurance – the smugness, indeed – that characterised the British Establishment after the victory of the Second World War. In 1956 the Suez adventure put paid to London’s pretensions that it ruled the world, while the Profumo Scandal of 1963 discredited the elite who liked to think that they ruled London. But from these misadventures emerged a more populist identity under the Labour governments of Harold Wilson – for whom Elizabeth II developed something of a soft spot – with the Swinging Sixties, divorce and homosexual law reform, the Beatles, miniskirts, England winning The World Cup …

In one sense, the monarchy rode serenely – and not a little superciliously – above all these social and political changes. Elizabeth II, her critics complained, occupied a completely different universe from the ‘Women’s Lib’ movement that developed in the 1960s and 1970s – and so she did. On the other hand, the antiquated British system of hereditary monarchy delivered supreme national prestige and authority to a woman throughout these tumultuous years, with an openmindedness and, yes, a modernity, that the contemporary United States still cannot bring itself to embrace. Every episode of The Crown (201–310) – and every chapter of our book (One to Twenty) – plays with this delicious paradox: the sight of powerful men having to bow and kneel to an unremarkable mother of two (of four by the end of Season 2).

This second volume follows the first in attempting to separate history from invention. How much of the drama that viewers so enjoy in The Crown is historically ‘true’? And how much has series creator Peter Morgan invented? On several occasions we will follow Elizabeth II as she meets characters whom we are 99 per cent certain she cannot possibly have encountered in this way – the rebel peer Lord Altrincham, for example, visiting Buckingham Palace after his dramatic criticisms of the monarchy, or Eileen Parker, the wife of Philip’s friend Mike Parker, whom Elizabeth seeks out to discuss her marriage problems. No, dear viewer and reader, these encounters did not happen. But, yes, these dramatic inventions have been devised to embody the central themes and messages of the plot. Drama, remember, is not the same as documentary.

Peter Morgan does not write a word of The Crown until he has worked out a documented historical template for each episode with the series’ research team. Solid factual data – letters, documents, newsreels and first-hand interviews with surviving participants and witnesses – form the backbone and skeleton of every story. Then the writer and his fellow writers add dramatic flesh to the bones, creating a drama on screen that is a unique blend of real history and imagined truths – as exemplified by the famous ‘Stag Scene’ in The Queen, Peter Morgan’s Oscar-winning movie of 2006.

Towards the climax of The Queen, which depicts the events following the death of Diana, Princess of Wales in August 1997, we see Elizabeth II, played by Helen Mirren, lost in the Highlands of Scotland in the course of a deer hunt. Suddenly she catches sight of the deer, a magnificent Imperial stag, standing proudly on the river bank in front of her – an embattled and harassed monarch just like her, pursued as she is at that moment by the media of the world who are condemning her for her apparent indifference to Diana’s death. Elizabeth starts talking to the stag. She senses their common plight, and it pierces her to the quick. Stricken with anxiety as she hears the hunters approach, she then waves her arms and shoos the imperilled beast to run away to safety – which he does. One minute he is there – the next minute he is gone.

The ‘Peter Morgan Stag Scene’ is taught in film schools around the world as an illustration of how sheer invention, plucked out of the air, is essential to make history performable. No one imagines that Queen Elizabeth II has ever spoken to a wild stag in her life. But it is the scene that people remember as summing up the essential truth of The Queen and conveying the totally accurate and historical message of the movie – that if Diana was destroyed by the monarchy, her mother-in-law was another type of casualty.

Every episode of The Crown TV series has been imaginatively built in a similar fashion around a major historical event of the period – from the Anglo-French-Israeli conspiracy behind the invasion of Suez in 1956 to the tragic deaths of 116 children and 28 adults in the Welsh mining village of Aberfan in 1966. The corresponding chapter in this book will seek to explain the different layers of that episode, analysing how research and interpretation have worked together to create the final dramatic mix.

In 1956, for example, only a few inner, top-level government conspirators knew the details of the plot that Britain and France hatched with Israel to create an excuse for invading the Suez Canal Zone. Similarly, in 1966 it took months to lay bare the shameful culpability of the National Coal Board in failing to monitor the waste tip that fatally smothered Aberfan’s Pantglas Junior School.

So should the dramatist depict such episodes by working solely with the surface, contemporary knowledge and ignorance of the participants at the time? Or is the writer permitted to ‘enrich’ the narrative with the benefit of hindsight? That debate provides a running tug-of-war through every chapter of this book – enhanced by two illustrated colour picture sections that display The Crown’s production stills – reflecting the key scenes from Seasons 2 and 3. Has the screen version improved on history, or corrupted it? The question is there for the reader to decide.

Hilary Mantel, the historical novelist, has offered a profound and illuminating description of the difference between history and the past – two very different horses, in her view, who are each of a contrasting colour. As she explained in her BBC Reith Lectures of 2017, the past is what really existed – all the lives and loves and hopes and dreams of the billions and trillions of people who have lived and died on earth since time began. Then along comes the historian – rather like a gardener, suggests Ms Mantel, who is holding out a sieve to try and capture any fragments of the past that might get caught in the mesh: the books and surviving documents, the monuments and artefacts that remain, along with the shards unearthed by the archaeologists.

These fragments make up ‘history’ – the comparatively few and often banal relics that survive in the sieve. But most of humanity’s past, all those glorious personal dreams and loves, all the beautiful and creative emotions fizzing away inside people’s heads and hearts for countless millennia – all that precious reality has escaped history’s mesh.

Poor historians! You can sense Ms Mantel’s pity for the paper-shufflers who have missed out on the real life of the past through sticking to their stolid, fact-based approach. What a glorious opportunity for the historical novelist and screen writer to pounce upon all those treasures that have passed through the sieve, deploying their imaginations to recreate a drama that is both fictitious and true.

‘You got it all wrong and you got it all right,’ declared one of the Queen’s private secretaries a year or so back when Peter Morgan invited him to pass judgement on the early seasons of The Crown – and that is the theme examined in the pages that follow. History requires the magic of the dramatist’s imagination in order to become performable – which means, in the most basic sense, that the drama you see on screen is ‘all wrong’.

But when you take account of the human truths about the Queen and her family that have been confected and conveyed to you by The Crown, then the dazzling creation on the screen in front of you can certainly be judged to be ‘all right’. That is the paradox which this book now invites you to explore.

Robert Lacey is a British journalist and the author of the bestselling books The Kingdom, Majesty, and Ford: The Men and the Machine. For the past three years he has split his time between Saudi Arabia and London to research this book. 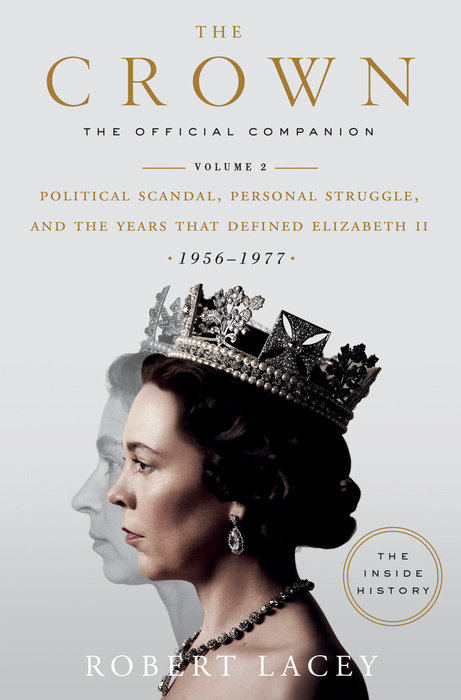