Catherine excels at helping desperate people disappear. But now she must use her unique skill set to find a missing woman in this electrifying novel from the author of The Burial Society.

Eva Lombard is being followed. Or so she suspects. . . .

Eva and her husband, Peter, are in Hong Kong on a romantic getaway from London when Peter wakes up in their hotel room to an empty bed, his wife gone without a trace. His worst fears are confirmed: Eva wasn’t imagining things. Suddenly, he finds himself the number one suspect in his wife’s disappearance, trapped in a foreign country with no one to turn to. He calls his boss, Forrest “Holly” Holcomb, who enlists the help of Catherine, his ex-flame and the enigmatic operator behind the darknet witness-protection program known as the Burial Society.

As a favor to Holly, Catherine sends her team of highly trained Society members on a dangerous chase through Hong Kong to find Eva—while Catherine takes care of pressing business at home. Not only is she tasked with a mission in Mexico City, protecting a family that knows too much from a vengeful pharmaceutical company, but an FBI agent tracking down the missing wife and child of a charismatic businessman is about to come dangerously close to exposing the Society’s secrets.

In these intertwining story lines that converge in unexpected ways, not everyone is who they appear to be—and not everyone who is lost wants to be found.

An excerpt from The Empty Bed

I could tell the story differently; of course I could. Every storyteller twists his or her lens to suit an agenda. Or protect the heart.

This impulse to shape the truth is universal, one of the many traits that serve to remind us that we are more alike than we are different.

I find it useful to focus on where we align even as our differences threaten to tear us apart. After all, in order to do what I do, you have to not just learn to see the world through others’ eyes, but to live, to breathe, to act, to be another.

Welcome to the Burial Society. Peer into the lens and see what I see.

I shut the door of my rental van but don’t lock it. It’s not only that I don’t fear it will be stolen in this exclusive neighborhood; it’s that we will need to make a fast exit. The computer geeque decals I’ve slapped on its side panels are eye-­catching and distinctive (what any witness will remember)—­and easily disposable.

The sunbaked asphalt is spongy under the hard soles of my boots. The air is dry as bleached bones, hot and still. The sun, relentless and blinding, hangs directly overhead in a serene blue sky free of any clouds.

I open the passenger door to let Stephanie out and make a mental note to talk to her later about some refinements in her appearance. In her usual uniform of skintight shredded black jeans, rock ’n’ roll T-­shirt, and leather jacket, bright blue eyes rimmed with kohl, she stands out here in the Arizona suburbs. You can take the girl out of Jersey, but still, she needs to learn to blend in.

I’m also worried she might pass out from the heat in that leather jacket and, purely selfishly, that’s the last thing I need right now.

Holding up one hand to signal she should stay put, I pull out a pale pink polo shirt that matches my own and toss it to her.

“Lose the jacket. Put this over your T-­shirt.”

She complies. It’s time to move.

The villa we are targeting sits in a cul-­de-­sac in a pricey community anchored around a golf course and also featuring a clubhouse, tennis courts, and swimming pools. The monochromatic soft beiges and muted greens of true sunbaked desert should color the landscape here, so the deceptive emerald of the man-­made lawns and rolling hills of the golf course give this development a disingenuous feel, temporary, like it could be just a stage set, struck at any moment.

Despite this, the harsh sun reminds us where we really are.

It’s why we came at noon; everyone is inside, shades drawn against the blazing sun, air conditioners pumping.

We have a cover story ready if we’re stopped, of course, but I’d prefer it if we just slid in and out without anyone noticing. My plan is to get inside her house and then get Leslie Virgenes out of there as quickly and cleanly as possible. If she’s there. If not, I’ll have to improvise.

We steal across the lawn and past a silver Audi TTS Coupe parked in the driveway of the “Spanish­inspired” villa, a good first sign. We turn the corner and edge along the house to the back door. We did a trial run last night at a sister complex across the road built by the same developer. Under Stephanie’s expert tutelage, I picked three kitchen-­door locks to get my rhythm down, each one taking progressively less time. Stephanie may need refinements in certain areas, but she has skills and is willing to teach them.

Stephanie joined the Burial Society seventeen months ago. Like most of my recruits, she was a rescue in whom I saw potential. (Her stories, along with those of my other recruits, are tales for another time.)

We snap on latex gloves. I conquer Leslie’s lock in less than twenty seconds. As the tumbler clicks over, Stephanie gives me a pleased grin, a teacher proud of her pupil.

We’re in. Steph closes the door softly behind us and lifts her shaggy mane of black hair away from her damp neck. The sweat on my skin prickles with chill in a matter of seconds. The powerful hum of the central air system swallows up most sound.

A cup of cold coffee with a congealed ring of cream sits on the gray granite countertop, next to a half-­finished piece of toast smeared with peanut butter. A fat fly buzzes lazily over a bowl filled with overripe bananas and a net bag of tangerines. A smaller bowl next to it holds a set of keys. A fob for an Audi is a probable match for the car parked in the driveway.

I extract two loaded syringes of fentanyl from their pouch in the leather satchel strung across my body and hand one to Stephanie. I head through the kitchen into the dining room. Stephanie follows, but then we split paths, she heading toward the front office, den, and main living area, me toward the bedrooms. We’ve studied the floor plans together, role-­played every possible scenario: finding Leslie alone, with her son. Possibly armed. Almost certainly irrational from fear. If Leslie’s even still here. My current guess is yes, given the evidence of the car in the driveway and the keys and food in the kitchen.

There will be three bedrooms along this corridor. The first door hangs ajar. The room is tidy and a bit sterile: a guest bedroom. The second door is closed and I push it open. Leslie’s son’s room, cluttered with sports trophies and posters; the faint aroma of teenage hormones and perspiration discernible even in the chilly air. The room looks like it hasn’t been used in a while. A lone striped tube sock sits on the end of the neatly made bed, but otherwise it’s tidy, a bit dusty. I’m relieved; the kid is supposed to be away at college (a sophomore playing for the Arizona Wildcats) and it makes my job simpler if he’s where he ought to be, someone else dispatched there to ensure he’s safe.

The door to the master bedroom is half open, a spill of golden light playing across the russet tile floor of the hallway. I walk ­toward and then into the light, pushing the door fully open. I enter Leslie Virgenes’s private domain, a tastefully and luxuriously appointed master bedroom and bath, the showpiece of the trophy second home she purchased at the pinnacle of her successful career in the pharmaceutical business.

A California king-­sized bed with an expensive-­looking cream-­colored headboard of tufted raw silk dominates the space. The sheets, comforter, and mounds of pillows on the bed coordinate in feminine waves of flowers, all rosy pinks and soft golds except where the stain from her loosened bowels darkens their hue, a foul side result of asphyxiation. A plastic bag is ruthlessly snugged around her head.

My hand flies to my mouth as I fight the sour wash rising up in my throat and the sting in my eyes. We’re too late. I back away. They’ve found her. Killed her. There’s no more I can do here. There’s no reason to stay.

But it means others I need to protect are in terrible danger.

I swiftly make my way back toward the center of the house. I find Stephanie coming in my direction.

“Nobody,” she reports softly. “But the front-­door lock was jimmied open. Clean job.”

The question is rhetorical. I’d tried to help Leslie before she came here, but people don’t always listen to reason. Particularly when they’re terrified.

Steph hands me her syringe, and I carefully slip both of them back into their pouch and then into my satchel; we had them ready to drug Leslie only if she wasn’t willing to come quietly. We were here to protect her, but she wouldn’t have known that.

A framed photograph of Leslie and her son snags my eye. Arms around each other’s shoulders. Smiling faces. The same crinkly brown eyes. He was a sperm donor baby; Leslie the only parent in his life. I suppress the rush of empathetic grief I feel for Leslie’s teenage boy. We need to get out of here quick and clean.

We slip out of the back of the villa just the way we came, our shoes tapping softly across the Mexican tiles. I pause and scan the empty blandness of the community before we make our move. The heat seems even more oppressive than it did mere minutes ago; perhaps it’s the indelible image of Leslie Virgenes’s flattened, lifeless face tightly wound in unforgiving plastic. I’m glad I stopped Stephanie before she saw the body. She doesn’t need to carry that picture in her head.

I inhale a deep gulp of hot air. The community is quiet as a morgue, except for the angry drone of a lawn mower somewhere in the distance. I nod to Stephanie and we go, slipping quietly across the impossibly green grass, making a beeline for the van. I scan the street, my eyes searching for the telltale flick of a curtain, or a shadow crossing a window, but come up empty.

We climb inside the van and I turn a corner before stopping to quickly strip off the computer geeque decals. As I hop back behind the wheel, a siren’s urgent wail pierces the silence.

I see the flashing cherries of the approaching patrol vehicle. I pull away from the curb slowly and calmly despite my racing heart. I feel in my bones that this is no coincidence. Someone wanted the cops to find us with Leslie’s corpse. 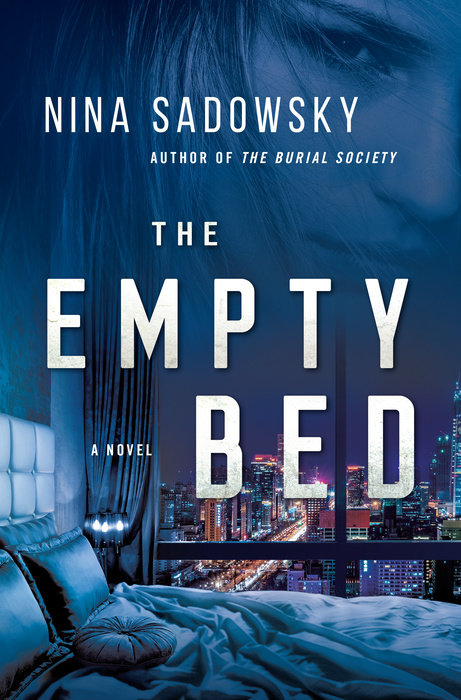