For more than half a century, in such books as The Art of Happiness and The Dalai Lama’s Little Book of Inner Peace, the Dalai Lama has guided us along the path to compassion and taught us how to improve our inner lives. In A Force for Good, with the help of his longtime friend Daniel Goleman, the New York Times bestselling author of Emotional Intelligence, the Dalai Lama explains how to turn our compassionate energy outward. This revelatory and inspiring work provides a singular vision for transforming the world in practical and positive ways.

Much more than just the most prominent exponent of Tibetan Buddhism, the Fourteenth Dalai Lama is also a futurist who possesses a profound understanding of current events and a remarkable canniness for modern social issues. When he takes the stage worldwide, people listen. A Force for Good combines the central concepts of the Dalai Lama, empirical evidence that supports them, and true stories of people who are putting his ideas into action—showing how harnessing positive energies and directing them outward has lasting and meaningful effects. Goleman details the science of compassion and how this singular guiding motivation has the power to

• break such destructive social forces as corruption, collusion, and bias
• heal the planet by refocusing our concerns toward our impact on the systems that support all life
• reverse the tendency toward systemic inequity through transparency and accountability
• replace violence with dialogue
• counter us-and-them thinking by recognizing human oneness
• create new economic systems that work for everyone, not just the powerful and rich
• design schooling that teaches empathy, self-mastery, and ethics

Millions of people have turned to the Dalai Lama for his unparalleled insight into living happier, more purposeful lives. Now, when the world needs his guidance more than ever, he shows how every compassion-driven human act—no matter how small—is integral for a more peaceful, harmonious world, building a force for a better future.

Revelatory, motivating, and highly persuasive, A Force for Good is arguably the most important work from one of the world’s most influential spiritual and political figures.

Praise for A Force for Good

“A Force for Good offers ideas that every individual can work with and build on, ranging from things that help the environment to things that help the less fortunate. [It’s] a long-range, global plan from a brilliant futuristic thinker, so this is a book that can be of value to any human living on Earth. When you’re ready for a jolt of optimism, pick up this book.”—Pop Culture Nerd

“Far from being a self-help book, this examines specific ideas espoused by the Dalai Lama, such as emotional hygiene, compassionate economy, and education of the heart that can make the world a better place. An optimistic and thoughtful primer with practical applications.”—Booklist

An excerpt from A Force for Good

Daniel Goleman is the New York Times bestselling author of the groundbreaking book Emotional Intelligence. A psychologist and science journalist, he reported on brain and behavioral research for The New York Times for many years, and has received several awards for his writing. He is the author of more than a dozen books, including three accounts of meetings he has moderated between the Dalai Lama and scientists, psychotherapists, and social activists. Goleman is a founding member of the board of the Mind and Life Institute, a cofounder of the Collaborative for Academic, Social, and Emotional Learning, and codirector of the Consortium for Research on Emotional Intelligence in Organizations. 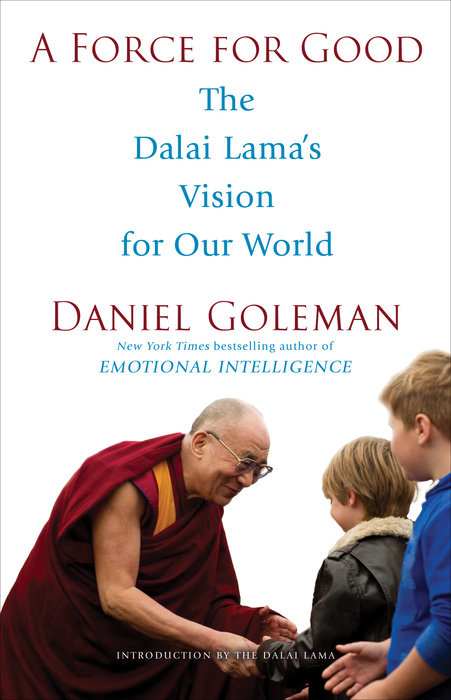