Make the most of your pantry and fridge with this fun and easy-to-use cookbook that turns groups of three ingredients into three distinct courses.

Whether you’re buying food for the week or just a food lover who wants to explore new tastes, Kitchen Remix is the flexible handbook you’ll constantly have open thanks to its 75 recipes that reimagine dinner.

Charlotte Druckman, an accomplished food writer and journalist, shows you how to combine—and re-combine—three base ingredients into a variety of distinct meals: goat cheese, strawberries, and balsamic vinegar turn into Goat Cheese Salad, Strawberry-Chevre Parfaits, and Strawberry Shortcakes. Squid, cornmeal, and peppers are the key players in Hoecake, Cornmeal-Crusted Calamari, and Saucy Peppers, Polenta & Boiled Squid. Meanwhile, Curry-Roasted Carrots, Carrot Upside-Down Cake, and Thai-ish Carrot Salad are all within easy reach when you begin with carrots, cashews, and coconut.

With trendy recipes and exciting twists, this book makes cooking simple and fun with easy-to-follow recipes and a manageable pantry section for home cooks of all skill levels. Along the way you’ll also learn techniques such as braising, poaching, and oven-frying. It’s a flavor guide for the food curious that will grow with you in the kitchen.

An excerpt from Kitchen Remix

Many of the most adventurous eaters and food-loving citizens I know are intimidated by cooking. They can’t wait to visit new restaurants, taste unfamiliar dishes from other cultures and countries, try new sauces or spices they’ve read about. But they don’t feel quite as intrepid at the stove. They have the basics under their belts and are comfortable with a few simple techniques or dishes, if a little bored. They want to incorporate some of what they’re experiencing as diners and shoppers into their home kitchens, but they’re not sure how. Maybe you’re one of them. If so, I wrote Kitchen Remix for you.

I’ve always loved cookbooks. Growing up, I read my mom’s, tracking her progress on the page alongside her as she followed a recipe. I cooked from them sometimes, too, and enjoyed it. In 2005, I started writing about food and, three years later, cofounded a somewhat irreverent yet adoring cookbook tournament: Food52’s The Piglet, which playfully pits sixteen of the year’s best titles against each other, NCAA March Madness–style, recruiting judges like Ina Garten or the late Nora Ephron to weigh in. That’s when the cookbooks really began rolling in and filling my shelves. If it bears even the slightest resemblance to a cookbook, I’ve probably seen it.

I’ve found most of these books fall into one of two broad categories: either they’re cheffy, restaurant-style productions containing information meant to impress without necessarily being applicable to the residential kitchen, or they’re expressly designed for home cooks and dumbed down, presuming that the average nonprofessional has a limited capacity to learn and an equally stunted palate. If you’re curious or passionate about food, you’re probably looking at books that are full of things you would love to eat but really don’t want to cook, or their opposite: books featuring things easy to make but monotonous to eat.

What kind of cookbook would offer incentive and guidance to these underserved, potentially prolific—or at least mildly active—home cooks? What would satisfy a wide range of cravings and a desire for more sophisticated flavors, and remain in the realm of possibility for anyone untrained or underconfident? I hadn’t really thought about it before, despite all that time spent with my nose in those books, until my brother had what I consider a legitimate food crisis.

John has the best sense of humor of anyone I know. He and I live to prank our other family members and loved ones, but when he asked me how to boil water a few years ago, I knew he wasn’t joking. I was aware he didn’t cook but assumed he could do enough to fend for himself. How was this possible? We’d grown up with the same parents!

A few weeks after this troubling revelation, I presented my brother with a mini food processor and the gift of a cooking lesson, with me, for Christmas. Getting him in the kitchen wasn’t the challenge; figuring out what to do with him once I got him there was. This is a man who spends his weekend afternoons chasing the best dim sum or Greek meze in Queens. He’s more likely to order in Peruvian-style rotisserie chicken with spicy-creamy green ají sauce than a plain, griddled breast. And no one has a better working knowledge of the tacos of New York City—all five boroughs.

Between these dining excursions, I knew he tried to stay relatively healthy. I kept that in mind as I thought about the ingredients he gravitates toward. They’re easy to find, versatile, and complementary: chicken breast, broccoli, cashew nuts, pineapple, pasta, carrots. I started there and began to contemplate what we could cook with them—and all the possible permutations.

We could do a crisp-skinned cast-iron chicken with olive oil–roasted, brown-’round-the-edges broccoli tossed with salt, lemon, smoked red chili flakes, and toasted cashew nuts. I could teach him how to stir-fry chicken with the brassica, canned pineapple, and nuts, using the leftover juice from the fruit for a marinade. The cashews and broccoli could go in the food processor with garlic, herbs, and some cheese, then olive oil drizzled in to make a pesto for saucing pasta—with or without chicken; redirected, that dish could become a chicken salad, with or without pasta. The condiment could also have other destinations—spooned on top of roasted carrots or smeared onto a melted-cheese-topped piece of poultry and placed on a roll as a reimagined chicken Parm sandwich.

We got a lot done that afternoon—too much for one person to digest in one sitting, literally and figuratively. I’m not sure which of us was prouder at the end of the day. John no longer needed to be embarrassed about his inability to boil water or to cook. But I had inadvertently discovered a way to get people who are passionate about food into their kitchens to do more than pour a bowl of small-batch granola, toast a few slices of a long-fermented sourdough loaf, brew a cup of microroasted, organic coffee, or, at best, fry up some local farm-fresh eggs and artisanally cured bacon. By focusing on a few compatible, lovable ingredients at a time and offering a bunch of alternative ways to put them together—or remix them—I could optimize for manageability and still offer variation, with a little choose your-own-adventure thrown in.

So, I wrote this book for John, but really, I wrote it for people who want to make cooking a part of their routine, whether occasionally or multiple times a week. I also wrote it for people who already cook regularly and want to add a few dishes to their rotation, get acquainted with flavors they haven’t incorporated much in the past, or learn some novel ways to work with those they frequently turn to.

Are you in the market to acquire some new, nonscary techniques? This book is for you. And if you like or have to cook but are nonplussed by humdrum spaghetti and meatballs, banal baked potatoes, Toll House–ish chocolate chip cookies, down-the-line mac and cheese, or boxed brownies, this is your cookbook, too.

My hope is that you’ll acquire some essential, adaptable skills and learn how to apply them with imagination. Ultimately, I want to show you that if your main ingredients get along, you can trust them—and yourself—to produce something you’ll want to eat.

In a way, Kitchen Remix is as much about defining a style of home cooking that feels relevant to our lives today as it is about answering that timeless question: what do I want to eat?

Charlotte Druckman is a journalist, food writer, and the creator of Food52's Tournament of Cookbooks (aka the Piglet). She conceived and edited the collection Women on Food, is the author of Skirt Steak: Women Chefs on Standing the Heat and Staying in the Kitchen and Stir, Sizzle, Bake, and coauthor of Anita Lo's Cooking Without Borders. She lives in New York City. 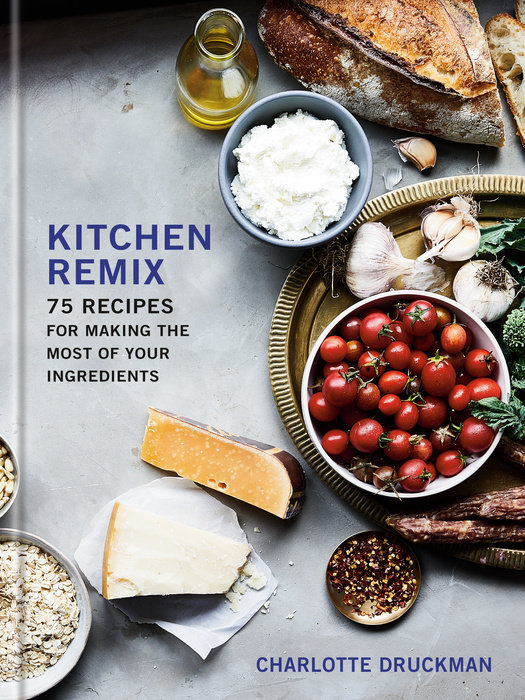