A “highly imaginative and utterly exhilarating” (Thrillist) debut that is “the best of what science fiction can be: a thought-provoking, heartrending story about the choices that define our lives” (Kirkus Reviews, Best Debut Fiction and Best Science Fiction & Fantasy of the Year).

A mysterious child lands in the care of a solitary woman, changing both of their lives forever.

I expected many things from this trip. I did not expect a family.

A ship captain, unfettered from time. A mute child, burdened with unimaginable power. A millennia-old woman, haunted by lifetimes of mistakes. In this captivating debut of connection across space and time, these outsiders will find in each other the things they lack: a place of love and belonging. A safe haven. A new beginning.

But the past hungers for them, and when it catches up, it threatens to tear this makeshift family apart.

Praise for The Vanished Birds

“This is the most impressive debut of 2020.”—Locus

“This extraordinary science fiction epic, which delves deep into the perils of failing to learn from one’s mistakes, is perfect for fans of big ideas and intimate reflections.”—Publishers Weekly (starred review)

“The Vanished Birds finds an intimate heartbeat of longing in a saga of galactic progress and its crushing fallout. . . . A novel of vast scope that yet makes time for compassion, wonder, and poetry.”—Indra Das, author of The Devourers

An excerpt from The Vanished Birds

He was born with an eleventh finger. A small bead of flesh and bone beside his right pinky. The doctor calmed the worried parents and told them the nub was a harmless thing. “But still,” he said, unlacing a small cloth pouch, “a farmer needs only ten fingers to work the dhuba.” He coaxed the child to sleep with the smoke of torched herbs, and sliced the nub from the hand with a cauterizing knife. And though the mother knew her baby felt no pain in his medicated sleep, she winced when the flesh was parted, and clutched him to her breast, praying that there would be no memory of the hurt when he woke, while her husband, unable to resist indulging in his hedonism even then, breathed deep the doctor’s herb smoke, and was spelled by a vision of the future—­in his dilated pupils his son, a full-­grown man, handsome and powerful, with a big house at the top of the hill. The new governor of the Fifth Village. To commemorate this vision, he had the finger boiled of its flesh, and its bones placed in a corked glass jar, which he shook on wistful days, listening to the clack of good omens as he whispered to his baby, “You are going to run this place one day.” The boy burbled in his arms, too young to recognize the small and varied ways life was contriving to keep him put.

They called him Kaeda, the old name of this world.

Kaeda grew up proud of the scar on his right hand, the shape of it changing over the years. When he was seven, the healed tissue rippled down the side of his palm like a troubled river. He was happy to show the other children the mark when he was asked, and he giggled as they stroked the skin with furrowed brows, at once impressed and unnerved by its texture. Some children called him cursed; those were the children who learned from their parents to distrust the unusual. To them, he shoved his scar under their noses and confronted them with the fact of it, repeating the words of his father: “I’m going to run this place one day!” and through sheer force of will convinced them that the scar on his hand was a lucky thing.

He had a natural charisma. The caretakers doted on him, and the other kids played the games he wanted to play, believed what he believed. Everyone but a girl named Jhige, who never missed an opportunity to push back against his wild declarations, matching pride with pride as she countered his wild theories on why the sky was red, and why the smell of the air changed during the day; why everything smelled soft and sweet in the morning and sour as a kiri fruit at dusk. “And your scar isn’t special,” Jhige shouted. “It just means you were born wrong!” They wrestled in the yellow grass until the caretakers separated them. They fought like dogs most days, but despite the bruises he might nurse on the way home, he always emerged from the fights unbothered, certain that she was only jealous that it was he who was destined for greatness, and not her, though what greatness that was, he did not know, and would not, until the day the offworlders arrived.

Before that day, he was only familiar with the stories his parents shared: how every fifteen years the offworlders broke the sky with their cloth-­and-­metal ships and landed in the plains east of the village to collect the harvest of dhuba seeds. His father told him that this special day was called Shipment Day, and that on every Shipment Day, a great party was held for both the offworlders and the farmers. “A party you will never forget,” he promised.

His mother laughed from the other room. “Unless you drink too much.”

“The drink is half the fun,” his father countered.

Kaeda was unable to sleep the night before his first Shipment Day. His mind was too alive with the stories; the new faces he would see, the new hands not stained purple from the dhuba fields. He gazed through his small bedroom window at the black sky littered with stars, with no regard for the late hour, as he imagined what it would be like to leap from light to light. What places there were, on the other side. When his mother came to collect him in the morning he was exhausted, all his energy spent the night before, conjuring these fantasies. He dragged his feet into his sandals and complained loudly as they marched with the other villagers to the plains east of town, begging for rest until his father sighed and carried him on his back, where he drifted in and out, unaware of time or location, only the warm and thick smell of the man’s shoulder, like the embers of a dying fire.

And then the sky cracked and he woke up with a shriek and his father laughed and pointed upward and he followed his father’s finger up to where, against the slate of red sky, twelve thin green lines arced above the horizon line, the end points gaining in size until, not two minutes later, the giant metallic beasts touched down on the carpet of grass with ground-­shaking thumps, one after another, the vibrations attacking his heart, swollen now as it occurred to him that he had never seen such large creations, nothing as intricate as their cloth wings and the hull panels that gleamed under the sun, or the sonic boom of their hangar doors that dropped onto the dirt like jaws mid-­shout, or the people who emerged from within of every variant shade of skin, some lighter than his, others darker, dressed in clothing that seemed woven out of the stuff of starlight. With a nauseous rush the scope of his world telescoped outward to accommodate the breadth of these awesome quantities. His whole body shivered. And then he pissed himself. His father cursed and lowered him to the ground, cringing at the stain on his back.

The offworlders were shown to the banquet cushions in the center of the Fifth Village. Bowls of spirits and plates of dhuban pastries—­long, purple, and flaky—­were served on wide platters. Kaeda could not see the offworlders from where he sat—­a minor disappointment, as he stuffed himself with sweet breads and bowls of juice, feeling warm and content between the motions of his parents’ bodies, pleased by the sound of hard snaps when his mother cracked open nuts with her muscular fingers, and the bellow of his father’s drunken, joyful laugh. He felt a satisfaction with the world so complete he even smiled at Jhige, who was with her own family on the other end of the long table, and she, startled, returned his smile with a small wave of her own before turning back to her uncle, who was in the midst of another tall tale about the Butcher Beast of the southern forest—­horror stories with which the young would startle themselves awake later that night, and stare into the dark corners of their bedrooms, waiting to be devoured. The adults exploded with laughter.

After the banquet, when the hard drinking began, the caretakers and new parents brought the children back to their homes. But Kaeda wasn’t finished with the night—­he had yet to meet an offworlder—­so he planned his escape from the group. He told his friend Sado to lie to the caretakers and say that he had run home ahead of them, and before Sado could so much as nod, the boy was gone, hugging the side of the squat buildings, back to the bonfire and the harsh scent of liquor.

It was there, at the end of the alley, before the path opened up into the plaza, that he saw her: a woman, alone on a bench, silhouetted by the fire.

She held a wooden flute to her lips. Her fingers spidered up and down the length of the instrument, playing music that reminded Kaeda of the sound of wind whistling through a cracked-­open door. He watched her from the shadows. Even sitting down, she seemed tall. She was black-­skinned, her hair shaved to the scalp, and was dressed in an outfit simpler than her friends: a white top with a collar cut down to the chest bone and dark bottoms that hugged the curves of her legs. Each note she played on her flute made the bonfire ahead of them dance, or maybe it was the fire that was influencing the music, or the stars, or all of it, working in concert, together. The song was the night itself. It was in his people’s laughter as they danced by the fire, and it was in the smell of fruit and smoke in the air; it was in the light, caught in the beads of sweat on her collarbone. It was everywhere. The woman’s breath flumed through the wooden tube, and bellowed heat into his belly, gladly mesmerizing him, until her large eyes shot up and saw him.

She spoke with two voices, one in a language he did not understand, and the other his own. It sounded as though she were haunted by her own ghost, she her own distant echo. He was too young to recognize the doubled voice as a quirk of her translator device, believing instead it was a kind of offworlder magic.

“Did you like it?” she asked, referring to the music.

He nodded. She stood up and approached him. Her shadow was long; it ran past him, into the dark fringe at the end of the alley. There was an instinct in him to run, as though some part of him knew that if he should stay there would be no turning back, but he ignored this instinct and planted himself to the ground, stubbornly so. She crouched before him, eye to eye. Close enough for him to smell the flowered chemistry of her skin.

“Take it,” her doubled voice said, handing him her flute.

Simon Jimenez is the author of The Vanished Birds. This is his second book. 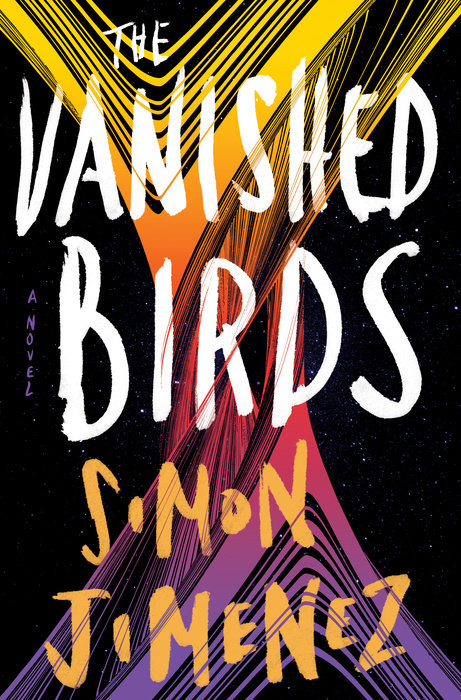