“A sassy, accurate, and enormously helpful romp through the midlife transition known as menopause . . . I highly recommend it to all women who want to embrace all the possibilities offered by this change, including vibrant health, a sense of humor, a renewed sense of purpose, and the best sex of your life.”—Christiane Northrup, MD, #1 New York Times bestselling author of The Wisdom of Menopause

Brit-pop icon and outspoken menopause ambassador Meg Mathews refused to move quietly into this stage of midlife. Rejecting the idea that we should live in fear, suffer silently, or medicate ourselves unnecessarily through this natural hormonal shift, Mathews set out to get answers and advice from the medical establishment, alternative therapists, and her many friends in the midst of “the change.” When she launched the Megs Menopause website, it quickly became the trending online destination for pre- and menopausal women all over the world. The New Hot is her no-holds-barred guide to menopause, designed to empower and entertain in equal measure, including:

• The latest information about hormone therapy and bioidentical hormone therapy
• Her best tips and techniques for coping with menopausal symptoms (There are officially thirty-four possible symptoms; Mathews has personally dealt with thirty-two!)
• Dishy, girlfriend-to-girlfriend advice about what to really expect when you’re aging

Honest, stylish, and informative, The New Hot will help you take on menopause—and keep you sense of self, style, and humor intact.

An excerpt from The New Hot

What The Hell Is Going On?

There is an adage: “Listen to your body when it whispers because then you won’t have to hear it scream.” That sums up menopause for me. Not every woman experiences symptoms, but if you do, ignoring what’s happening can lead to your body screaming so loud you will finally be forced to listen.

My menopause crept up on me—­gently whispering with anxiety and night sweats. Like many women, I ignored the signs. That’s one of the things with menopause—­it comes when you also have so many other things on your plate. Growing children or teenagers, aging parents, and work compete for our attention, and we get pushed down our own to-do lists. I was so busy trying to get on with life and be a “superwoman” who could do it all that my body had to start screaming before I listened to what it was telling me.

I had heard of menopause, of course, but I didn’t really know what it would mean for me. I thought my periods would stop and I might feel hot a couple of times. And it would end there! I had never heard of “perimenopause”—the time when your estrogen levels start to fall—and didn’t know that you can have menopausal symptoms that are sometimes more severe than when your periods actually stop.

Anxiety was my worst symptom, but, as you’ll read as the book goes on, there were many more, and I hear countless stories from other women who think they are hypochondriacs because they have been to the doctor so often with symptoms like joint pain, fatigue, night sweats, and weight gain around the middle, yet not been given any solutions. Misdiagnosing menopause costs insurers millions as people get treated for things like fibromyalgia, migraines, depression, chronic fatigue, and thyroid issues. This happens because there is a real lack of knowledge around menopause. Trying to find information was very daunting and confusing for me. Maybe it is because it isn’t that long since we would have kicked the bucket either before, or not long after, menopause, so it didn’t seem worth talking about. But nowadays we are likely to have decades left to enjoy.

The taboo around the topic doesn’t help. In 1948, menopause was mentioned on one radio show, and there was a huge outcry—­“lowering of broadcasting standards” and “acutely embarrassing” were two of the many complaints. And I think that reluctance to talk remains—­even now, one TV channel I appear on won’t let me use the word—although I am doing all I can to reverse that. In my “ideal menopausal world,” every woman would get a letter or an email from their healthcare provider when they are 45 to tell them all about what’s going on and what to expect.

Admittedly, it is easy to freak out when you realize what is happening to you. Don’t fear the word “menopause.” It isn’t a disease. It is a rite of passage that every woman goes through. I am five years in, and there really is light at the end of the tunnel. At the worst times I simply said to myself “this too will pass,” and it did—­and I now feel older, wiser, and more comfortable in my life than ever.

To get to that point, though, it helps to understand what’s happening to your body and why, so over to expert, Dr. Laura Jarvis, to explain it . . .

I have worked as a menopause specialist for almost twenty years, helping thousands of women in that time, and it’s so interesting to me that menopause can be challenging for some, while others seem to cruise through unaffected. It definitely feels a little unfair.

It’s not known why women have menopause—­most animals are fertile throughout old age. Nor do we know exactly what triggers it. What we do know is that women are born with the total number of eggs they will have for their whole lifetimes. Once you reach puberty, the pituitary gland releases hormones (Luteinizing Hormone [LH] and Follicle Stimulating Hormone [FSH]) that stimulate the ovaries to release an egg. The ovaries are also what produce most of the estrogen in the body. As we get older, we lose eggs through ovulation, and the ovaries become less responsive to LH and FSH. As a result, the ovaries produce less estrogen. It’s believed this combination is related to triggering menopause—­but we’re not sure exactly what happens.

Why does menopause affect so many things?

Because almost every system in our bodies responds to estrogen, it’s not surprising that the symptoms accompanying its fall are many and varied. The average age of menopause is 51, but there is a large spectrum as to when exactly it occurs, with some women unfortunately experiencing a very early menopause in their early twenties. Exactly why menopause occurs at different ages is also not well understood. We know that, for example, if your mother had a very early menopause it might increase your likelihood of having one, too, but even that is not absolutely guaranteed.

So, when are you in menopause?

The symptoms of perimenopause and menopause last for four years on average, but, once again, there is a huge range, with some women experiencing no symptoms at all and some women still having them in their seventies.

Here comes the rub. Menopause often hits women when their teenage kids are acting out or preparing to leave home, elderly parents are beginning to fail, and gray hair and wrinkles have taken hold. It is not difficult to see that this toxic mix can lead to a “perfect storm” of problems. So, how do you know if what you’re experiencing is the stress of normal life or the effects of your changing hormones? Well, often it can be quite obvious. If somebody comes to me and they say, “I’m struggling to sleep, and I am sweating and having hot flashes,” and I say to them, “When was your last period,” and they say, “Oh, it was about six months ago,” that will lead me to think that they are menopausal or perimenopausal. Other times it’s less clear cut.

Should you have your hormones measured?

A test for Follicle Stimulating Hormone (FSH), which rises during menopause, is useful for women under the age of 45 where there is some ambiguity around whether they are menopausal and they have stopped their periods. But for women who are over 45 and have stopped their periods, checking their FSH does not provide us with any useful information. The only exception is for those who are using progesterone-only contraception, which may stop their periods. Women who are taking the combined pill need to stop for six weeks before an FSH test can be taken. One question I’m often asked is whether women need to see a doctor during menopause if their symptoms aren’t concerning them. My advice is that it is definitely worth having a conversation with your physician to make sure you have good lifestyle advice and information about Hormone Replacement Therapy (HRT) even if you’re not sure you’re going to use it. I am sometimes frustrated when I see women who should maybe have been offered HRT because they have a family history of osteoporosis, for example, and missed the boat because they didn’t have that conversation.

The other reason it’s good to chat with your physician is that menopause is the ideal time to stop and take stock of your general life and health. Women now live up to a third of their lives in menopause, so it is important to make sure it is as healthy as possible. Menopause is also a great time to lose that extra weight you have been planning to shed for a while, to stop smoking, or to become more active. Make time for yourself and invest in your body (it’s the only one you have!).

For some, menopause has a lot of negative connotations, but I take a slightly different view. Old age is a gift not afforded to everyone, my father included. He died in his early fifties and missed out on so much of life. I am therefore determined to enjoy my post-menopausal years.

My bucket list gets longer by the day; bring it on!

Meg Mathews is an icon of the nineties Brit-pop scene, a former music industry executive, and the ex-wife of Oasis frontman Noel Gallagher. In 2017, she launched Megs Menopause, a platform dedicated to breaking the stigma around menopause. In 2018, she held her first annual conference for menopause information and discussion. That same year, she was awarded the Inspiring Public Figure Award by the Inspiring Leadership Trust. She lives in London. 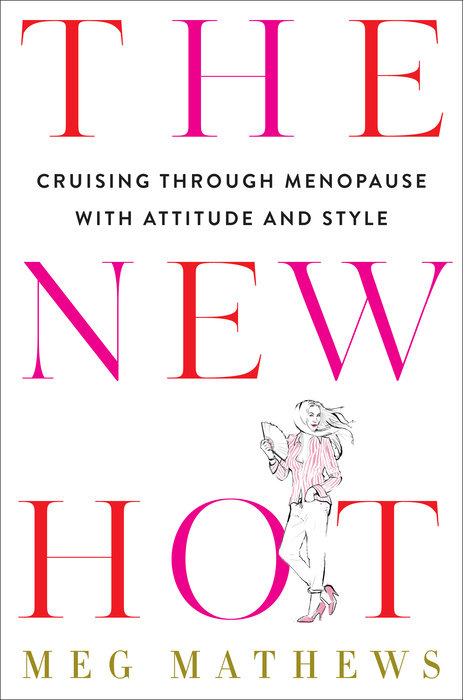