“A riotous journey into the heart of insanity also known as the State of Florida. Bravo!”—Gary Shteyngart, author of Lake Success

Florida, circa 1980. Reed Crowe, the eponymous Florida Man, is a middle-aged beach bum, beleaguered and disenfranchised, living on ill-gotten gains deep in the jungly heart of Florida. When sinkholes start opening on Emerald Island, not only are Reed Crowe's seedy businesses—a moribund motel and a shabby amusement park—endangered, but so are his secrets. Crowe, amateur spelunker, begins uncovering artifacts that change his understanding of the island’s history, as well as his understanding of his family’s birthright as pioneering homesteaders.

Meanwhile, there are other Florida men with whom Crowe must contend. Hector “Catface” Morales, a Cuban refugee, trained assassin, and crack-addicted Marielito, is seeking revenge on Reed for stealing his stash of drugs and leaving him for dead (unbeknownst to Reed) in the wreckage of a plane crash in the Everglades decades ago. Loner and misanthrope Henry Yahchilane, a Seminole native, has something to hide on the island. So does irascible and pervy Wayne Wade, Reed Crowe’s childhood friend turned bad penny. Then there are the Florida women, including Heidi Karavas, Reed Crowe’s ex-wife, now a globe-trekking art curator, and Nina Arango, a Cuban refugee and fiercely protective woman with whom Reed Crowe falls in love. There are curses. There are sea monsters. There are biblical storms. There’s something called the Jupiter Effect.

Ultimately, Florida Man is a generation-spanning story about how a man decides to live his life, and how despite staying landlocked and stubbornly in one place, the world nevertheless comes to him.

An excerpt from Florida Man

It was a three-aspirin morning, the day after the anniversary of Reed Crowe’s daughter’s death, the eve of his ex-wife Heidi Karavas’s return to the island after one of her long trips abroad, and something was amiss. So amiss that Crowe stopped stirring the sugar in his Café Bustelo and set down his spoon on the kitchen island and pondered what it was.

His head, like a Magic 8 Ball these days. The pot, the wine. yes. no. maybe. try again later.

Sometimes he wondered if he wasn’t losing his mind, like his mother, living almost five years now in a Fort Lauderdale nursing home. Early onset dementia.

Now Crowe looked through the Gulf-facing windows of his beach house, scratching his beach bum beard, blinking groggy blinks behind his green-tinted aviators.

A nervous tinselly light dappled the ceiling and glittered on the terrazzo floor. Brighter than usual, the sun. Sharper.

He sipped from the blue enamel florida man mystery house mug, the coffee still so hot it scorched his lips. He cursed, set the mug down.

Then he noticed the blank wall next to the television. Where a framed watercolor by Lily, his deceased daughter, usually hung, there was now a bare nail.

Crowe got up from the kitchen island stool and went to where the painting lay facedown on the floor. He picked it up. The glass and frame were unbroken. A watercolor of Crowe, fishing, on a little dinghy in the sea. Below the boat Lily had drawn a coral reef with anemones and parti-colored polyps. A school of bright tropical fish swam toward Crowe’s line and hook. The fish had exaggerated smiles, human teeth.

Crowe put the painting back up, straightened it. “Otter,” he said. The girl’s nickname.

He was not usually a superstitious man.

But even with the painting back on the wall, Crowe sensed something off. He scratched the scruff of his beach bum beard, contemplated what it was.

He put on his rubber flip-flops and scuffed outside in his boxers and bathrobe.

A brilliant cloudless morning, mid-April, the south Florida sun in his hair and on his scalp. Almost tourist season. Almost spring break.

Almost f***ed, between the Emerald Island Inn and the Florida Man Mystery House, his businesses, if you could even call them that, falling to ratshit. All of his debts piling on.

But a beautiful day yet. The mellow spring breeze riffling the sea oats on the sand dunes.

Crowe was halfway across his small garden, its menagerie of cacti and succulents in terra-cotta pots, when he halted.

The lime tree with the red hummingbird feeder, vanished.

For a wild second he thought the tree stolen. He wondered what kind of reprobate would go to such lengths.

Before long he realized this an addle-brained notion.

It was a sinkhole.

The state was riddled with them.

And now here was one just like they showed on the news, on his property.

Crowe toed up in his zories for a closer gander. Where it once stood there was now an unimpeded view of Florida beachfront. He could see the plank board path wending among the hundred-year-old dunes. And beyond the dunes the expanse of sugar-white beach, the bottle-green Gulf rolling soft and tranquil like it always did before spring heated up and summer storms made the water moody.

Crowe stepped to the edge of the chasm and peered down. He couldn’t see bottom. Couldn’t see the hummingbird tree.

Just an ink black crack, a zigzag seam of darkness.

Arms akimbo, face vexed, Crowe glanced around. He went to the patio table and fetched the conch shell ashtray full of joint ends and chucked it into the hole. Down it clattered and clacked, maybe twenty-five feet, maybe thirty, before hitting bottom.

He wanted to chuck other things down the hole, and he could have easily pissed away the whole morning in this fashion, but there was no time.

It was ten a.m. and he was due at the Florida Man Mystery House.

The Florida Man Mystery House, one of those dubious roadside attractions in this part of the state, a remnant from the era of tin can tourism, before HoJo and Holiday Inn and oh-Jesus-Christ-Mary-Mother-of-God Disney World. Now the highway billboards for the Mystery House were so faded, the paint so thin, the paper so flayed and shredded, the palimpsest of old ads showed underneath.

You had to wonder if the place was still open.

But in its heyday the Florida Man Mystery House boasted about a dozen big billboards all along the Florida highways.

Even a few on the newfangled turnpike.

A picayune operation, the Florida Man Mystery House. A skeleton crew. Just Reed Crowe, Wayne Wade, and Eddie Maldonado, aka the Coca-Cola Kid, a Mexican teenager from outside Emerald City.

Beginning of April, Eddie showed up asking if he could sell refreshments off Crowe’s boat. The kid offered to pay for part of the gas, plus half the soda earnings, cash. Crowe saw no harm. Told the kid just the gas money was fine. If times weren’t so lean, he might not have asked for that much.

And now, this morning, in his orange hatchback en route to the Florida Man Mystery House, Crowe passed one of the billboards. He gave the shabby-looking advertisement a look of rue.

long drive before another [bird shit] one!

Wayne Wade, always in arrears with a bookie or a weed dealer. Wayne Wade, fired from every pool hall and sports bar and wing hut in the county. And eighty-sixed from over half of those. Places where even the pill heads and cokeheads kept their jobs.

Lately Reed Crowe thought he needed a big long break from Wayne Wade. Several months at least. He hated feeling this way about his lifelong friend, but there you had it. Everywhere he turned, Jesus Christ: Wayne. Wayne at the pool hall. Wayne at the Sea Cave Arcade. Wayne at the Rum Jungle. Mostly it was at the Rum Jungle these days, because Wayne was eighty-sixed for life from Chill Norton’s Pervy Mermaid on the other side of the bridge.

There was also Reed Crowe’s other business. The Emerald Island Inn. Two stories, a salt-crusted old Florida motel if there ever was one, stucco of turquoise and cream and pink, narrow cement balconies connecting the rooms. Towels and beach shorts and bikini bottoms hanging on the railing, Florida Gator and Florida Seminole kids crowding the public beach with their coolers full of beer and their cheap tourist shop beach chairs that broke four days after you bought them.

More than half a century ago when they built the causeway from the mainland to Emerald Island, the inn was erected near the public beach, between the water tower and the lighthouse. There was the Rum Jungle tiki bar, the Blue Parrot diner, the bait shop, the mini-mart. These were the few concessions to tourism on the island. The rest of Emerald Island was divvied up into big multi-acre lots belonging to the locals. And beyond these big chunks of land, on the southern half of the island, was primordial wilderness, the nature preserve. One of the last bastions of undeveloped beachfront this part of Florida.

Decades ago the island’s big coral reefs were a popular destination for snorkelers and scuba divers, but in the late sixties a freighter carrying insect repellent and rat poison demolished the reef. One of the major tourist attractions, gone. Now the coral was dead bone, the hydra-headed gorgonians bleached white.

Fewer and fewer came the snowbirds. The sportsmen and yachtsmen and anglers. The convalescents who sought the tropical climate, the sun and the salt air and the long walks on the beach, to restore their health.

To some of the more misanthropic natives, this was just as well.

With a passel of other itinerant part-time employees and a few part-time maids, Wayne Wade managed, if that was the word, the old Emerald Island Inn. A mistake ever to mix business and friendship.

Tom Cooper has been published in dozens of literary magazines and journals, most recently in Oxford American, Mid-American Review, Gulf Coast, Boulevard, and Willow Springs. He is the author of The Marauders, his first novel, and his stories have been nominated four times for the Pushcart Prize. He lives in New Orleans. 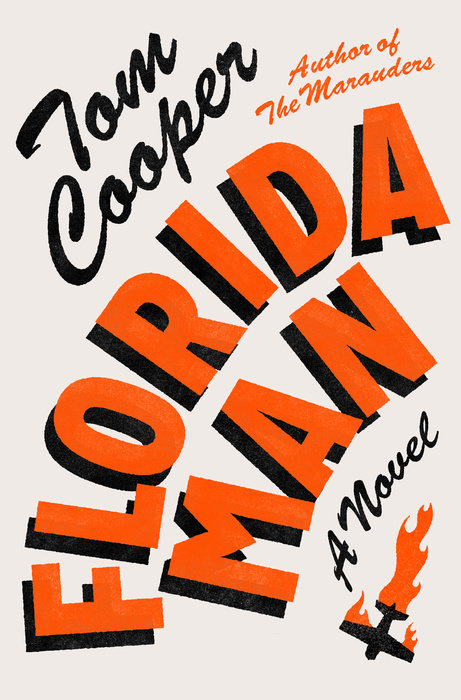