Fresh as F*ck Food for Every Table: A Vegan Cookbook

The New York Times bestselling authors of the Bad Manners cookbook series are back with a message for you (yeah, you): Eating less meat, saving the planet, and cooking at home don’t have to be so f*cking boring—or expensive.

If it feels like everything’s so f*cked that you just wanna lay down and let the earth reclaim your body, we understand. A global pandemic forced all of us back into the kitchen but our fridges were full of by-products and fake flavors. It seems like half the ingredients and produce we buy goes in the trash while people starve, the planet burns and also somehow floods. And our culinary chaos is partly to blame. This sh*t isn't sustainable.

Enter Brave New Meal: a chance for food to be not just different but better. Because here’s the dirty little secret about eating vegan (or plant-based, meatless, flexitarian, whatever the hell they’re calling it this week): done right, it’s the cheapest, healthiest, most environmentally friendly, and tastiest (did we stutter?) food you could possibly put into that temple you call a body. Brave New Meal shows you the way:

• 100+ life-changing vegan recipes including Orange Peel Cauliflower, Beeteroni Pizza, Nashville Hot Shroom Sammie, Jackfruit Pupusas, and Plum-Side-Down Cake
• Killer photos so you’ll know for sure you didn’t f*ck it up
• Tips on how to stretch your budget, limit food waste, and incorporate every edible piece of the plant into your meals (or finally find a use for that wilted kale in your fridge)
• Shortcuts and substitutions for when the grocery store is sold out or you need help getting dinner on the goddamn table already
• A produce glossary that breaks down everything you probably never knew (but most def should) about all the fresh stuff in your market

Look, we’re not asking you to go vegan. We’re not even asking you to give up bacon (do whatever you gotta do). But just be real honest when you answer this question: What do you have to lose?

An excerpt from Brave New Meal

What in the f*ck happened?

Not that long ago every social media platform was littered with poorly lit food photos captioned with enough hashtags to induce a headache. There was always another video with some rainbow-colored dish that nobody would ever eat. Delivery apps and takeout had reached a fever pitch, bringing the drive-thru into our driveways, all while exploiting restaurants and delivery workers. We decided it was somehow faster to wait an hour for food to get delivered by underpaid, overworked drivers than to make it ourselves in the same amount of time. We mindlessly threw away our money and health with all those takeout bags and plastic forks we got by the fistful. We worked 60-to-80-hour weeks just scraping by, while reassuring ourselves that we loved the hustle.

Ya know, the “rise and grind” bullshit. We ate what we could get, when we could get it, only looking to be full not fed. We were redlining our diet as much as our lives to reach a goal that none of us were totally clear on. We thought the rise of self-care meant that we should spoil ourselves, instead of cutting out the crap that was stressin us out in the first place.

Food culture had devolved into only a couple of ways to eat: conspicuously consuming healthy or trendy food so that everybody could see how cool, disciplined, or dedicated you were; or shoveling whatever you could find into your mouth when you finally realized you hadn’t eaten in twelve hours. Most of us were living like this, in one form or another, and nobody seemed to even notice.

We all sat on our asses while our relationship with food spoiled.

Maybe you were in the first camp. You let your “camera eat first” then picked at the plate of trendy food in front of you. You showed off your avocado toast, your cronut, and your ramen burger knowing damn well that you were only gonna have a green juice during the day and some buttered noodles at night. You cosplayed as someone who liked food, but really you liked getting attention for having good taste and enough disposable income to always be eating out. We’ve met tons of people like this. They start demanding food for free in exchange for “exposure” for the restaurant. They act like they’re somehow creative, somehow helping, when all they’re really doing is wasting food, not giving honest reviews, and making the rest of us feel broke. That shit is performative and certainly no way to live, let alone eat.

Maybe that wasn’t you though. Maybe you were the disciplined, social media-savvy self-appointed Healthiest Person in the Room™. You were always primed to talk about a new powder, an exotic mushroom, or cleanse that was changing your life, which, yeah, you said was perfect last month but now it’s like, extra perfect. It was keto, celery juice, paleo, or some other kind of pseudo-science restriction that was repackaged by you as some holy nourishment. We’ve met so many wellness influencers like this who charge hundreds of dollars so you could watch them make matcha lattes. When that doesn’t get them enough attention they quietly distance themselves from orthorexic narratives they pushed on their audience last year and rebrand with the hottest new advice. Now they promised they were advocating for something way better. They were gonna cleanse you of all the toxins, heavy metals, and parasites they were certain you had. You weren’t perfect, not like them. You just needed to give them your money, click the affiliate links, and realize there is no greater pleasure than feeling superior to everyone else, particularly when it comes to food. These kinds of people swear that their obsession with cleanliness, perfection, or finding a cheat code to health is the same thing as having a healthy connection with food.

Naw, babe, the only toxin you need to get out of your system is your toxic-ass relationship with food.

The rest of us were watching from the sidelines and thought that we couldn’t care THAT much about our diets, so we might as well not care at all. Sure, we’d order a side salad once in a while or give up sugar for a weekend or whatever we thought might count as “healthy.” But we didn’t mean it. Not really. We ate in our cars while talking on the phone; defrosted some cafeteria-style dinner we’d watch slowly dance around the microwave late at night; or we’d hit the drive-thru every day because any minute not spent working was a minute wasted. We shoveled bite after bite into our mouths so fast that we forgot what good food tasted like. We forgot we’re supposed to nourish ourselves, not just fill our bellies so we can move on to the next f*cking hoop we hafta jump through. We were conned by convenience, and our relationship with food and our own bodies suffered. We’re just as guilty as the dumb f*cks selling us snake oil or pictures of food they didn’t cook and never ate. One way or another, everyone felt f*cking terrible, and breaking the cycle felt impossible.

Then, almost overnight, all that shit changed. The world stopped just long enough for all of us to get a glimpse behind the curtain. When work stopped or slowed, we all spent more time at home. Lots of us realized that we all worked so f*cking hard that, with our punishing schedule gone, we had no lives. Our homes were just places we slept. We didn’t know how to fill the hours of the day because we hadn’t even had an hour alone with our thoughts in years. Finally at this slowed-down speed we could see all the cracks and breaks in our society that we’d been hustling too fast to see. Our world was deeply f*cked up before the global pandemic, but it took the murky, unprecedented halt of so much of our daily lives for us to see that we shouldn’t f*cking live like this.

Reassuringly, in 2020 many of us felt a tug toward a better tomorrow. Our brains went into caveman-mode and instinctually we had to start thinking about self-reliance, not self-aggrandizement.

We all got back in the kitchen, some of us reluctantly, and our relationship with food was forced to evolve. Flour got scarce as we reconnected with baking. Collectively we remembered we don’t
need to be so dependent on other people to feed ourselves. We realized that if we can commute an hour to work, juggle a dozen different schedules, remember everyone’s coffee order, and be on time to all the meetings then surely we could bake a f*cking loaf of bread while in our pjs. We’re capable as hell. We’ve always known what we should be doing, but we were lulled into thinking about food as either a chore or a novelty. When you’re stuck at home for days, weeks at time, things come into sharp relief. When the world seems uncertain you hafta sit down and ask yourself, “what the f*ck actually matters?” People overwhelmingly moved toward home-cooked meals and patio gardens. We’ve seen the largest spike in people growing their own food in the United States since the Second World War. And it’s about goddamn time, as a normal trip to the grocery store has become the world’s shittiest scavenger hunt. Even as authors of three previous cookbooks we had to sit down and wonder how the f*ck we wanted to be eating in this new world. Was it finally okay for meals to take longer to make if the payoff was amazing? Can something feel elevated but not be too intimidating to cook? Are people ready to really learn instead of just following directions? So, no, this was not the cookbook we had originally written. But that’s a good thing. The world changed and we decided to write the book we need now, not some book conceived in the “before times.” When shit catches fire sometimes you just gotta throw your plans into the flames and warm yourself by the embers. It’s called growth.

Bad Manners blew up the Internet back in 2012, when they first began blogging. Their first cookbook was a #1 New York Times bestseller. They are based in Los Angeles, California.

Fresh as F*ck Food for Every Table: A Vegan Cookbook 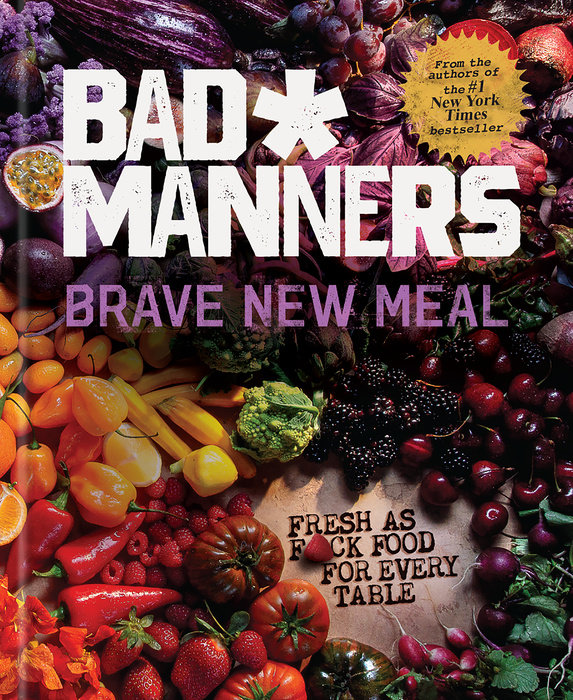