Bold Middle Eastern Flavors for All Day, Every Day: A Cookbook

“Finally! Eden Grinshpan is letting us in on her secrets of her healthful and deliriously delicious cooking. Giant flavors, pops of color everywhere and dishes you’ll crave forever. It’s the Eden way!”—Bobby Flay

Eden Grinshpan’s accessible cooking is full of bright tastes and textures that reflect her Israeli heritage and laid-back but thoughtful style. In Eating Out Loud, Eden introduces readers to a whirlwind of exciting flavors, mixing and matching simple, traditional ingredients in new ways: roasted whole heads of broccoli topped with herbaceous yogurt and crunchy, spice-infused dukkah; a toasted pita salad full of juicy summer peaches, tomatoes, and a bevy of fresh herbs; and babka that becomes pull-apart morning buns, layered with chocolate and tahini and sticky with a salted sugar glaze, to name a few.

For anyone who loves a big, boisterous spirit both on the plate and around the table, Eating Out Loud is the perfect guide to the kind of meal—full of family and friends eating with their hands, double-dipping, and letting loose—that you never want to end.

An excerpt from Eating Out Loud

Growing up, I was lucky enough to eat dinner with my family almost every night.

Our ritual of sitting together never felt forced, and it was never just about sharing a meal. Everything happened at the dinner table—singing, laughing, crying, screaming, dancing—we’re talking complete meshugas (“crazy” in Yiddish). It was a place for me and my two sisters to share our stories and to perform, whether it was impromptu Disney sing-alongs or crazy interpretive dance numbers. The three of us pushed one another to be as loud, obnoxious, and over-the-top as possible, and the kitchen table was our safe place to express ourselves.

And, of course, there was the food. In addition to being a total saint who put up with our constant nagging (What’s for dinnerrr??), my mom had a handful of dishes that she did really well, like lemon-olive roast chicken or silky vegetable soups—whole foods cooked simply. (Just reading that sentence probably made her smile—Hi, Mom!) Then there were the nights when my dad would pick up something really special on his way home. We lived in Toronto, one of the most multicultural cities in the world, and we had the food to prove it. My dad loved introducing us to different flavors and delicacies from around the world, bringing home things like traditional Persian flatbreads, Turkish delight, and tongue sandwiches that most families I knew weren’t sampling in their kitchens. For me, eating these foods and experiencing all the diverse spices and ingredients that we’d be lucky to find in a run-of-the-mill grocery store (at least in 1990s Toronto) became a mission. So when I graduated from high school, I enrolled in Le Cordon Bleu in London.

It was a plan that sounded great in theory—it would be a way to learn some real skills, especially since no one I knew was looking to hire a professional lip-syncer, and I would get to cook while eating my way across Europe. But even though I fell madly in love with cooking, and at eighteen had no idea what else I was cut out to do, I knew that standing still in one place, working the same station at the same restaurant day in and day out, was not an option. All I wanted was to see the world, to chase all the flavors that my dad had introduced me to. And I wanted to share those stories! I knew firsthand how personal and connecting a meal could be, and I wanted to somehow re-create that with as many people as possible. I was always that girl getting all up in friends’ faces about trying new foods (“You HAVE to try this!”), and I got such a high off being the person who introduced them to the best babka/baba ghanoush/Bolognese.

When I called my parents to tell them that I was going to spend the next year traveling instead of getting a “real” job, I thought they’d freak out. They didn’t. Actually, the opposite. They encouraged me to go— just like they encouraged me to go to culinary school in the first place—and suggested that I bring along a camera to film the experience. (Are they not seriously the coolest?) Fast-forward two and a half years, and I had cooked, eaten, and lived in India, Southeast Asia, and Israel, soaking up every last aromatic rice dish, spicy braised stew, vibrant vegetable curry, dumplings, noodles, and pita everything. I volunteered with local organizations, tapped in to communities and their unique stories, and learned about the food cultures that tied it all together. It turned out my  parents were right about what a smart move this was for me, and about filming it—I transformed that footage into a reel and ended up with dream jobs hosting shows like Eden Eats and Log On & Eat with Eden Grinshpan for Cooking Channel, and Top Chef Canada. And all that cooking experience made it possible for me to eventually open my very own restaurant, DEZ, in New York City.

But it was the last stop on my whirlwind Eat, Pray, Love tour that totally changed my life.

EDEN GRINSHPAN is a chef, food personality, and the current host of Top Chef Canada. After earning her culinary degree at Le Cordon Bleu in London, Eden found herself chasing big flavours around the world, cooking in restaurants, and eating her way across Europe, India, Southeast Asia, and of course Israel, from which her family hails. She conceptualized, produced, and hosted Eden Eats, her first culinary travel show for the Cooking Channel. Her career in television sparked, Eden then went on to host and judge a multitude of television shows, including Log On and Eat with Eden Grinshpan and Chopped Canada. Eden lives in Brooklyn with her husband, Ido, and their daughter, Ayv.

Collaborator RACHEL HOLTZMAN has worked on bestselling books with clients ranging from personalities such as Kate Hudson, Tiffani Thiessen, and Alicia Silverstone; to chefs such as Paul Kahan, Stephanie Izard, and Grant Achatz; to
forward-thinking brands such as Moon Juice, Sakara Life, and The Home Edit.

Bold Middle Eastern Flavors for All Day, Every Day: A Cookbook 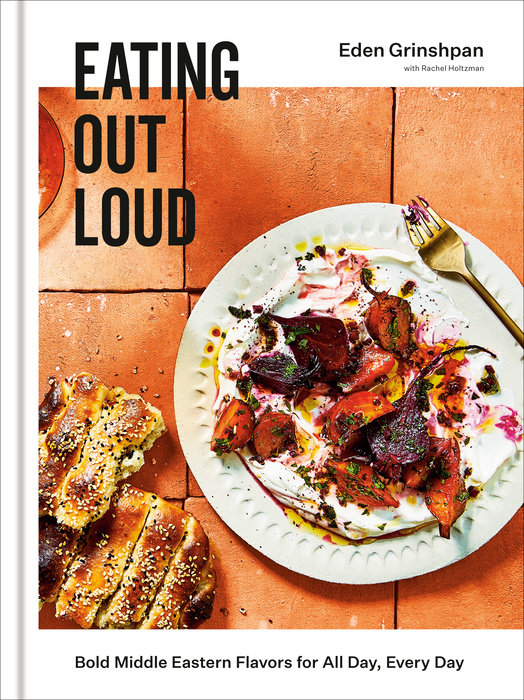