Reverse Hypothyroidism and Hashimoto's Symptoms with a Proven Iodine-Balancing Plan

Though the thyroid gland is small, it produces hormones that control the rate of nearly every chemical reaction in the body—turning food into energy, controlling the rate of tissue growth, stimulating the activity of other hormones, and much more. An estimated twenty million Americans have some form of thyroid disease, and up to 60 percent of them are unaware of their condition. Depending on the type and severity of the thyroid disease, symptoms can range from weight gain and fatigue to hair thinning and memory loss.

In The Thyroid Reset Diet, Dr. Alan Christianson helps readers reverse chronic thyroid diseases like hypothyroidism and Hashimoto’s Thyroiditis with nothing more than dietary change: the reduction of iodine intake. Backed by new research showing that proper dietary iodine intake can start to reverse thyroid disease in as little as four weeks, his diet plan contains the optimal amount of iron and dietary iodine to control thyroid hormones, effectively resetting the thyroid.

Instead of following a restrictive diet for thyroid health, The Thyroid Reset Diet does not require eliminating any food category. Instead, Dr. Christianson recommends food swaps like brown rice instead of processed bread to regulate iodine intake. He shares the latest on supplements and other thyroid health strategies, along with more than sixty-five recipes, weekly meal plans, and maintenance info. His cutting-edge research and clear results, coupled with an easy-to-follow diet plan, will help anyone struggling with thyroid disease.

An excerpt from The Thyroid Reset Diet


People with thyroid disease struggle with symptoms like fatigue, mood changes, weight gain, and hair loss. They try everything to feel better—medications, supplements, dietary changes. Yet most never hear about the one change that may help them the most. I’m happy to tell you that there is a new way forward—one that doesn’t include debilitating symptoms and constant doctor visits.

A new chapter is emerging for thyroid health, and someone needs to tell it. In 2007, doctors celebrated the 100th anniversary of Dr. Hiroko Hashimoto’s original paper that defined thyroid disease. He discovered that most thyroid disease was caused by the immune system attacking the gland. We call it chronic autoimmune hypothyroidism, or Hashimoto’s disease, because of his work. Along with the recognition of a century’s passage came hard questions: What do we have to show for the last hundred years? How far have we come to understand this condition and in helping people feel better?

Those answers have been sobering. Too many people are still undiagnosed, and surveys have shown that of those who are diagnosed, too few have had their symptoms resolved. This realization spurred a flurry of new information, and much of it was original research. This new information included insights gleaned through careful new analysis of existing research. Many have thought that our changing diets are somehow to blame. They are right, but not in the ways we expected.

Results have shown that regulating iodine intake could reverse thyroid disease, even in those who have severe thyroid disease. These studies were dramatic, and other scientists soon replicated them. Some showed complete disease reversal in as many as 80 percent of the participants. Never has any other treatment had such an effect on thyroid disease. My goal in writing this book is to help you join that lucky 80 percent.

We now know that thyroid disease is more reversible than previously thought. We also know that we are exposed to iodine from more sources and in higher amounts than originally thought. The amount of iodine in many common foods has been rapidly increasing, unbeknownst to many. Indeed, the connection between iodine and thyroid disease is fascinating. It turns out that iodine is unlike any other nutrient, in many ways.

Most nutrients are used by the body for producing countless reactions. Yet iodine is used almost solely in the thyroid, and only for the purpose of making thyroid hormones. Normally, the blood carries as much of most nutrients as the tissues need to function. But iodine has to be concentrated in the thyroid up to 100-fold above typical blood levels. For most nutrients, it is easy to get enough of what we need without getting too much; there is a wide range between the lowest amount and the lowest toxic dose. With iodine, though, that safe range is far narrower. Finally, most nutrients are found in foods in predictable amounts, yet iodine can vary wildly from batch to batch—in the same food.

How can a nutrient cause a disease that affects the only part of our body that needs it? It can be a hard concept to grasp.

Iodine is one of the nutrients your thyroid needs to build thyroid hormones. When your body gets a tiny amount of iodine, everything works as it should. Imagine the size of a single uncooked lentil; that is how much iodine your thyroid needs for an entire year.

Your thyroid simply cannot handle too much iodine. Indeed, the mass of iodine equal to 1.5 lentils per year could easily cause thyroid disease. In fact, it is so powerful that even the right amount of iodine can cause problems if it’s not consumed in regular amounts over time. Further, your thyroid can get rid of excess iodine only by producing thyroid hormones. Yet at the same time, excess iodine slows down the production of those thyroid hormones. Hence, consuming too much iodine can slow the thyroid. And like iodine intake, thyroid hormones cannot fluctuate significantly without having consequences.

With such narrow parameters for healthy thyroid function, humans have experienced thyroid disease for as long as recorded history. But it’s getting worse. In past decades, people in many parts of the world were found to be iodine deficient. We’ve now overcorrected for that deficiency, with many people getting far more iodine than they need—and yet they are unaware of the problem. This consumption of excess iodine is showing up in the growing numbers of people with thyroid disease. Based on age and ethnicity, from 30 to 40 percent of American adults are consuming unsafe levels of iodine. Many of them are lucky enough to tolerate it; those who can’t tolerate it get thyroid disease.

If you are among the millions of people with an unsafe iodine intake, that could be why thyroid disease is holding you back. So, the Thyroid Reset Diet may be your answer. The diet described in this book is a new approach to the problem. In a word, numerous clinical trials have shown that careful iodine reduction can successfully reverse thyroid disease and eliminate its symptoms. This book is the first time that approach has been made available to the public, and it comes in the form of a healthy diet that does not restrict food categories. Think of this book as mountains of that new research shaped into a simple action plan just for you. Indeed, this diet can help your thyroid heal, and then restore it to good function. If you were recently diagnosed with hypothyroidism and/or Hashimoto’s thyroiditis, there is a good chance that this diet plan could reverse your illness.

Thankfully, researchers have recognized that thyroid disease is a growing epidemic. They have launched countless new clinical trials, while at the same time investing thousands of hours in reanalysis of past studies. Among the top clues that led these researchers to this action were the observations made from the effects of low-iodine diets, which doctors were already using to increase the effectiveness of certain medical procedures.

Researchers have discovered that many people see their thyroid function improve while they are preparing for the scan. Many doctors observed this patient response and they wondered if it was just a coincidence or if it might be a useful phenomenon. It seems the preparatory low-iodine diet might help guide other treatments. So, researchers launched clinical trials in which they carefully monitored the effects of a low-iodine diet. People with significant thyroid disease were put on low-iodine diets and they were compared to others with the same degree of thyroid disease who were not on that special diet. Neither group was given thyroid medication, or any other treatment.

The studies all yielded the same results. Nearly everyone who was not on the diet stayed just as sick or got worse. Yet of those who were on the low-iodine diet, roughly 80 percent had normal thyroid function within as little as three months. Nearly all who did not improve either did not avoid iodine as recommended, or did improve, but were not cured just yet. It would seem likely that, given a few more months, they would have been fine, too.

I do not believe that this diet approach will help everyone with thyroid disease, but in accord with the published studies, nearly every person who was able to lower his or her iodine intake saw dramatic improvements in thyroid function.

Alan Christianson, NMD, author of the New York Times bestselling book The Adrenal Reset Diet, is a naturopathic medical doctor who specializes in natural endocrinology with a focus on thyroid disorders. He founded Integrative Health, a physician group dedicated to helping people with thyroid disease and weight-loss resistance regain their health. He has been named a Top Doctor in Phoenix magazine, and has appeared on national TV shows and in numerous print media. Dr. Christianson lives in Phoenix with his wife and their two children. Visit him at DrChristianson.com.

Reverse Hypothyroidism and Hashimoto's Symptoms with a Proven Iodine-Balancing Plan 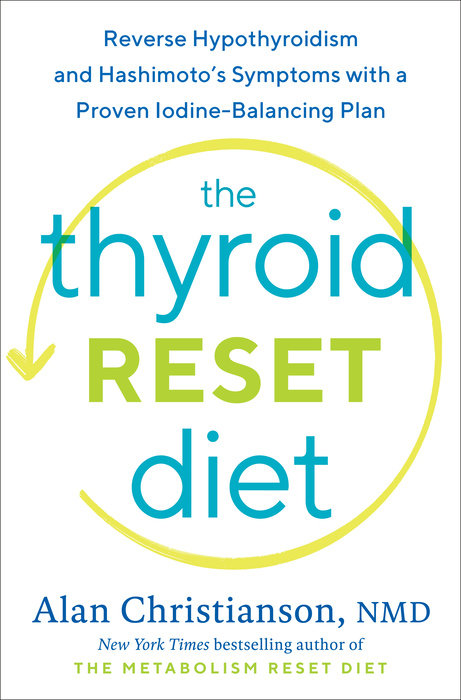