IACP AWARD FINALIST • ONE OF THE BEST COOKBOOKS OF THE YEAR: Time Out, Food52

Whether she’s frying up a batch of her crispy-garlicky wings for John’s football Sundays or making Chrissy her favorite afternoon snack—instant ramen noodles with ground pork, cabbage, scallions, and cilantro—Pepper Teigen loves feeding her famously fabulous family. Through these eighty recipes, Pepper teaches you how to make all her hits. You’ll find playful twists on Thai classics, such as Fried Chicken Larb, which is all crunch with lots of lime, chile, and fish sauce, and Pad Thai Brussels Sprouts, which bring the fun tastes and textures of pad thai to a healthy sheet of pan-roasted vegetables. And there are the traditional dishes Pepper grew up with, like khao tod crispy rice salad and tom zapp hot and sour soup.

Pepper shares stories about her life, too, such as how she used to sell sweet-savory kanom krok coconut-and-corn pancakes to commuters when she was ten years old in Thailand (now she makes them with her granddaughter, Luna, as a treat) and how, once she moved to the United States, she would cobble together tastes of home with ingredients she could find in her new homeland, like turning shredded cabbage and carrots into a mock-papaya salad. Influenced by Thailand, California, and everywhere in between, Pepper’s mouthwatering recipes and sharp sense of humor will satisfy  anyone craving a taste of something sensational, whether that’s a peek into America’s most-talked- about family’s kitchen or a rich and spicy spoonful of Massaman Beef Curry.

An excerpt from The Pepper Thai Cookbook

Hi! Pepper Thai here. You might know me from one of my Instagram videos or for being the mother of the one and only Chrissy Teigen. My real name is Vilailuck, but since I moved to the US decades ago pretty much everyone calls me Pepper because I LOVE spicy foods. More on that later.

As you might know, I’m from Thailand. I grew up in a small town outside Korat, a city in the eastern part of Thailand called Isaan. (Korat is a very popular food city, if you ever get the chance to visit.) From the day I was born, I grew up around food and cooking. My mother worked as a lunch vendor who sold food everyday outside the schools, sort of like an unofficial cafeteria lady.

When I was in third grade, I became her first helper, waking up to go to the market with her at 2 a.m. every day, peeling green papaya for papaya salad, chopping up shallots, or doing whatever else needed to be done. It was a lot of work to sell that much food every day, but I loved it anyway. As the oldest of five kids—I have two sisters and two brothers—it was my job to keep everyone in line. We had very little money, but my parents somehow always kept us fed. It helped that my mom was the best cook of all time.

Everything changed when I moved to America. I had met Ron, Chrissy’s dad and my ex-husband, in Korat when I was nineteen or twenty. At that point I had my first daughter, Tina, and Ron was working as a traveling electrician. We dated for a few weeks, and because I’m so great, he asked me if I wanted to meet his family in Washington. Sure, but I didn’t have a visa to visit the US. The immigration officer told us on the side that the easiest way for me to get one was to get married. So we got married! This was in 1983. The next thing I know I’m on my first-ever airplane ride. I think the in-flight meal was the first American food I ever ate—pepper steak, of course. (Side story: my English was not very good then and I mixed up the words “mushroom” and “bathroom.” While I was eating I asked the stewardess where the mushroom was and she said they didn’t have any. I couldn’t believe it. I ended up holding it for nine hours until we landed!)

There was a lot to get used to in my new life. My English was not so good and we were living in a trailer that Ron rented for $100 from his dad. I remember seeing a microwave in the kitchen for the first time and thinking it was a TV. Wow, everyone is so rich here they have TVs in their kitchens, I told my mom.

A couple years later we were living in Utah and I was pregnant with Chrissy. Every day I had the strongest craving for Thai food, but all there was to eat was American food. It was all steak and potatoes! Some days I would cry because I missed that special flavor of Isaan food so much. So what did I do? I started cooking. I would drive an hour to find an Asian market that sold fish sauce so I could make “papaya salad” by pounding shredded cabbage and carrots in a big bowl (there weren’t many green papayas in Utah back then).

Later we lived in Washington state, where I had a slightly easier time finding ingredients like curry paste and Thai basil. I only had to drive forty-five minutes to get to Portland to buy the fresh chiles I loved. At that time I helped Ron run a bar that he had bought, cooking snacks like egg rolls and chicken wings for customers. Everyone called me “Pepper” because they knew how much I loved spicy food—sometimes I’d be behind the bar eating raw chile peppers while pouring drinks.

Once Tina and Chrissy were old enough to help me in the kitchen, we always cooked together. Food was my way of staying connected with my home and also how I shared with the girls what my mom had taught me about cooking. Whenever I made a trip to Thailand to visit family, I would come back with all the cookbooks I could carry, plus whatever Thai kitchen goodies I could stuff into my suitcase. The whole house would smell like fish sauce and fried garlic!

Like most kids, when Chrissy was little she always wanted American foods, like grilled cheese and pizza. I remember when I put herbs in one of my Thai salads and she yelled at me, MOM! Why are you eating weeds? Sometimes I would trick her and give her fish balls instead of pork meatballs. (She is still mad about this.) But as she grew older and spent more time away from home, the more she wanted me to cook Thai food for her: stir-fried rice noodles, papaya salad, all our favorite snacks, like roasted chile dip with pork rinds. Just as I used to discuss recipes with my mom, now Chrissy and I talk about how much cilantro to add to this or how much lime juice to add to that. I guess you could say I taught her everything she knows. ;-)

These days I live with Chrissy and John at their house in Beverly Hills. It’s pretty great. When I’m not shopping or helping Chrissy get ready for photo shoots, you can always find me in the kitchen, especially because I have my own section of the fridge for all my vegetables and fresh herbs and a pantry full of different soy sauces and coconut milk. I even have a garden where I grow my Thai basil, chiles, and lemongrass. No more driving to Portland! But the best part of living with the family is how much time I get to spend with my sweet angel grandbabies, Luna and Miles. Luna is becoming such a good cook and she knows all the herbs and what they smell like. And Miles loves to eat and try new foods all the time. They’re even starting to enjoy spicy food, too.


Now that I’ve told you about my life, you might be thinking, Pepper, what made you decide to write a cookbook? Good question! I have to admit it wasn’t my idea. When we were working on Chrissy’s cookbook, I had so much fun cooking dishes and getting them perfect that Chrissy told me I should think about writing my own. Me? No way. I’m just a village girl from Isaan. I never thought I would be writing a cookbook!!!

But look, here we are. It turns out that you don’t know how many recipes and dishes you have to share with the world until you sit down and try to write them out. Many of the recipes in this book are dishes I’ve cooked for decades or foods from the past that I crave, like Isaan-style tom zapp and the fried bananas that a street vendor would sell on my block. But there are also recipes that come from nowhere but my own head—like spaghetti with Thai sweet chile jam.

The number one message I want to share is that cooking Thai food shouldn’t be scary. What if I’d never tried making papaya salad when I lived in Utah because the ingredients weren’t exactly the same? I would have starved! Make the recipes in this book and you will learn to trust your taste buds like I do—a squeeze of lime juice, a dash of fish sauce, and, of course, a big pinch of chile.
One thing before you go off pounding in your mortar and stir-frying in your wok— let’s talk about spiciness. Warning: I like to sprinkle super-hot fresh Thai chiles on my food like they are salad croutons. I gotta have my chiles! But of course I know that not everyone loves hot food as much as I do. I recommend starting mild and working your way up—even a little bit of spice makes everything better in my opinion.

My biggest hope is that these recipes bring you as much happiness and excitement as they do when we cook them at our home. And, of course, I have some pretty good stories to share about John and Chrissy, too. Anyway, make sure to say hi if you like my food because it makes me so proud. Until then, stay spicy! 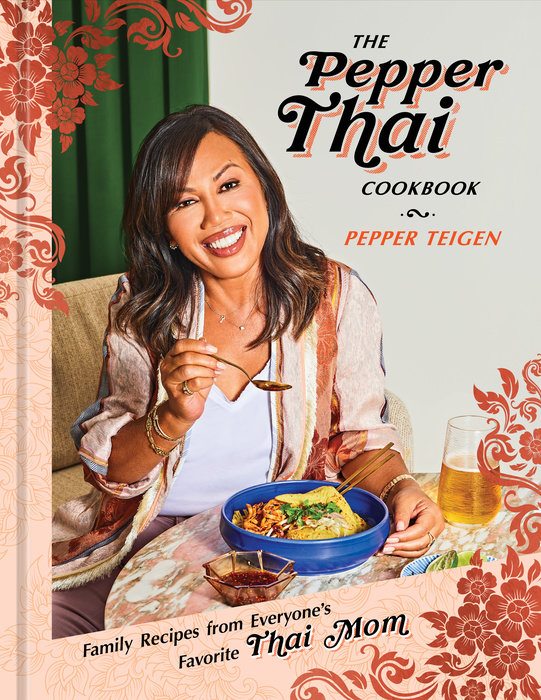