NEW YORK TIMES BESTSELLER • A fascinating exploration of the intricacies of how we remember, why we forget, and what we can do to protect our memories, from the Harvard-trained neuroscientist and bestselling author of Still Alice.

“Using her expertise as a neuroscientist and her gifts as a storyteller, Lisa Genova explains the nuances of human memory”—Steven Pinker, Johnstone Professor of Psychology, Harvard University, author of How the Mind Works

Have you ever felt a crushing wave of panic when you can't for the life of you remember the name of that actor in the movie you saw last week, or you walk into a room only to forget why you went there in the first place? If you're over forty, you're probably not laughing. You might even be worried that these lapses in memory could be an early sign of Alzheimer's or dementia. In reality, for the vast majority of us, these examples of forgetting are completely normal. Why? Because while memory is amazing, it is far from perfect. Our brains aren't designed to remember every name we hear, plan we make, or day we experience. Just because your memory sometimes fails doesn't mean it's broken or succumbing to disease. Forgetting is actually part of being human.

In Remember, neuroscientist and acclaimed novelist Lisa Genova delves into how memories are made and how we retrieve them. You'll learn whether forgotten memories are temporarily inaccessible or erased forever and why some memories are built to exist for only a few seconds (like a passcode) while others can last a lifetime (your wedding day). You'll come to appreciate the clear distinction between normal forgetting (where you parked your car) and forgetting due to Alzheimer's (that you own a car). And you'll see how memory is profoundly impacted by meaning, emotion, sleep, stress, and context. Once you understand the language of memory and how it functions, its incredible strengths and maddening weaknesses, its natural vulnerabilities and potential superpowers, you can both vastly improve your ability to remember and feel less rattled when you inevitably forget. You can set educated expectations for your memory, and in doing so, create a better relationship with it. You don't have to fear it anymore. And that can be life-changing.

An excerpt from Remember

When Akira Haraguchi, a retired engineer from Japan, was sixty-nine years old—an age most of us associate with senior discounts and a less-than-optimal memory—he memorized pi, a nonrepeating, infinite number with no pattern, to 111,700 digits. That’s the number 3.14159 . . . ​carried out to 111,695 more decimal places. From memory! If this sounds completely mind-blowing, I’m with you. Surely, you’re thinking, Haraguchi must have been a child prodigy. Or perhaps he’s a mathematical genius or a savant. He’s none of these. He’s a regular guy with a healthy, aging brain, which means something maybe even more mind-blowing—your brain is also capable of memorizing 111,700 digits of pi.

We can learn and remember anything—the unique sound of your child’s voice, the face of a new friend, where you parked your car, that time you walked to the market all by yourself to buy sour cream when you were four years old, the words to the latest Taylor Swift song. The average adult has memorized the sound, spelling, and meaning of 20,000 to 100,000 words. Chess masters have memorized in the ballpark of 100,000 possible moves. Concert pianists who can play Rachmaninoff’s third concerto have committed the coordination of almost 30,000 notes to memory. And these same folks don’t need the sheet music to play Bach, Chopin, or Schumann, either.

Our memories can hold information that is deeply meaningful or nonsensical, simple or complex, and its capacity appears to be limitless. We can ask it to remember anything. And under the right conditions, it will.

How can memory do all of this? Neurologically speaking, what even is a memory? How is a memory made? Where are memories stored? And how do we retrieve them?

Making a memory literally changes your brain. Every memory you have is a result of a lasting physical alteration in your brain in response to what you experienced. You went from not knowing something to knowing something, from never before having experienced today to having lived another day. And to be able to remember tomorrow what happened today means that your brain has to change.

How does it change? First, the sensory, emotional, and factual elements of what you experience are perceived through the portals of your senses. You see, hear, smell, taste, and feel.

Let’s say it’s the first evening of summer, and you’re at your favorite beach with your best friends and their families. You see, among other things, your children playing soccer on the beach and a spectacular sunset glowing in the sky. You hear “Born This Way,” one of your favorite Lady Gaga songs, playing over a portable speaker. Your daughter runs up to you, wailing, pointing to her bright pink ankle. A jellyfish has just stung her. Luckily, your friend carries a small container of meat tenderizer with her for this very scenario. You make a paste of the tenderizer and rub it on the sting, relieving your daughter’s pain almost instantly (this really works). You smell the salty ocean air and smoke from the bonfire. You taste crisp, cold white wine, fresh briny oysters, and gooey sweet s’mores. You feel happy.

The sight of your children playing soccer has nothing to do with Lady Gaga or jellyfish or the taste of oysters, unless these fleeting, separate experiences become linked. To become a memory that you can later recall—Remember that first night of summer, when we ate oysters and s’mores and listened to Lady Gaga while the kids played soccer on the beach and little Susie Q was stung by a jellyfish?—all that previously unrelated neural activity becomes a connected pattern of neural activity. This pattern then persists through structural changes created between those neurons. The lasting change in neural architecture and connectivity can later be reexperienced—or remembered—through the activation of this now-linked neural circuit. This is memory.

Creating a memory takes place in four basic steps: Encoding. Your brain captures the sights, sounds, information, emotion, and meaning of what you perceived and paid attention to and translates all this into neurological language. Consolidation. Your brain links the previously unrelated collection of neural activity into a single pattern of associated connections. Storage. This pattern of activity is maintained over time through persistent structural and chemical changes in those neurons. Retrieval. You can now, through the activation of these associated connections, revisit, recall, know, and recognize what you learned and experienced.

How does a constellation of previously unrelated neural activity become bound together into a connected neural network that we experience as a singular memory? We’re not entirely sure of how this happens, but we know a great deal about where it happens. The information contained within an experience that is collected by your brain—the sensory perceptions, the language, the who, what, where, when, and why—is linked by a part of your brain called the hippocampus.

The hippocampus, a seahorse-shaped structure deep in the middle of your brain, is essential for memory consolidation. What does that mean? The hippocampus binds your memories. It is your memory weaver. What happened? Where and when did it happen? What does it mean? How did I feel about it? The hippocampus links all these separate pieces of information from disparate parts of the brain together, knitting them into a retrievable unit of associated data, a neural network that, when stimulated, is experienced as a memory.

Moreover, the consolidation mediated by the hippocampus is a time-dependent process that can be disrupted. The formation of a memory that can be retrieved tomorrow, next week, or twenty years from now requires a series of molecular events that take time. During that time, if something interferes with the processing of a nascent memory in the hippocampus, the memory can be degraded and possibly lost.

Say you’re a boxer, a football player, or a soccer player, and you sustain a blow to the head. If I were to interview you immediately after you got clocked, you would be able to tell me about the punch, the play, the details of what was happening. But if I were to ask you the next day, you might have no memory of what happened. The information that was in the process of becoming linked by your hippocampus to form a new, lasting memory was disrupted and was never fully consolidated. The blow to your head caused amnesia. Those memories are gone.

Damage to the hippocampus probably explains why Trevor Rees-Jones, bodyguard to Princess Diana and sole survivor of the car crash that killed her and Dodi Fyed all those years ago, still can’t remember any details of what happened leading up to the accident. He sustained a devastating head injury, requiring many surgeries and about 150 pieces of titanium to reconstruct his face. Because the various elements of his pre-crash experience had not been fully linked together by his hippocampus when his brain was injured, they were never stored. Those memories of what happened were never made.

What happens if you don’t have a hippocampus at all? Henry Molaison, or HM, as he is called in the thousands of papers citing his case for over half a century, is the most famous case study in the history of neuroscience. When Henry was a child, he fell off his bicycle, fracturing his skull. Whether because of this head injury or a family history of epilepsy no one is sure, but from the age of ten on, he regularly experienced debilitating seizures. Seventeen years later, his seizures still unrelenting and unresponsive to drug treatment, he was desperate and willing to try anything to get some relief. So on September 1, 1953, at the age of twenty-seven, Henry agreed to undergo experimental brain surgery.

The year 1953 was still well within the era of lobotomies and psychosurgeries, procedures that involved the indelicate removal or severing of brain regions to treat mental illnesses such as bipolar disorder and schizophrenia and brain disorders such as epilepsy. These kinds of surgical interventions are deemed grotesque, barbaric, and ineffective today, but back then, they were routinely performed by respected neurosurgeons. With the goal of eliminating Henry’s seizures, a neurosurgeon named William Scoville removed the hippocampus and surrounding brain tissue from both sides of Henry’s brain.

Here’s the good news. Henry’s seizures almost entirely subsided. And his personality, intelligence, language, motor function, and ability to perceive were undamaged by the procedure. So in that sense, the surgery was a success. But he had tragically traded one plague for another.

Lisa Genova is the New York Times bestselling author of the novels Still Alice, Left Neglected, Love Anthony, Inside the O'Briens, and Every Note Played. Still Alice was adapted into an Oscar-winning film starring Julianne Moore, Alec Baldwin, and Kristen Stewart. Lisa graduated valedictorian from Bates College with a degree in biopsychology and holds a PhD in neuroscience from Harvard University. She travels worldwide speaking about the neurological diseases she writes about and has appeared on The Dr. Oz Show, Today, PBS NewsHour, CNN, and NPR. Her TED talk, “What You Can Do To Prevent Alzheimer's,” has been viewed more than five million times. 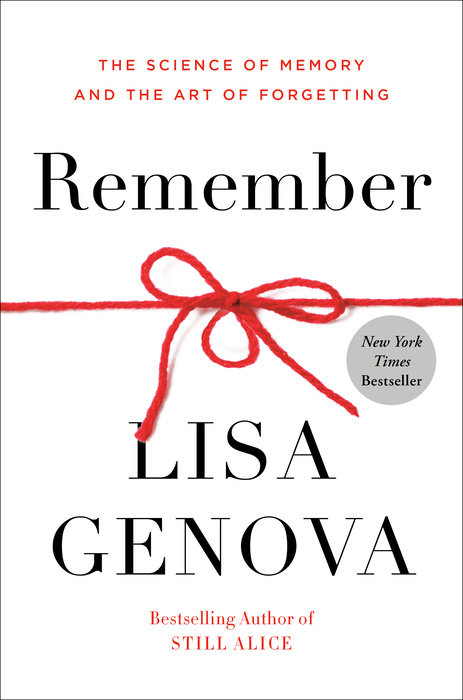