In this moving love story, three friends find out what it really means to save someone.

“A heart-stopping, heart-wrenching, and heartwarming story that kept me reading well into the night.”—Clare Pooley, New York Times bestselling author of The Authenticity Project

Kerry Smith is going to save lives—and so is her best friend, Tim Palmer. After years of working toward medical school, they are about to take their entrance exams. But on the eve of the new millennium, a classmate goes into cardiac arrest, changing everything.

Because, as it turns out, saving a life doesn’t always guarantee a happy ending.

With his soccer career cut short, Joel lashes out and breaks Kerry’s heart by ending their burgeoning relationship with a cruelty that derails her future, while Tim struggles to reconcile his dream of becoming a doctor with the reality of failing to act. As each struggles to move on from the events of that fateful New Year’s Eve, their lives can’t seem to stop colliding year after year. Ensnared by their shared histories and her big heart, Kerry soon finds herself picking up the pieces after both broken men. But when Kerry is the one who needs saving, will anyone be there for her?

As Kerry, Tim, and Joel discover what it means to love, to forgive, and to find your calling, How to Save a Life shows us that there is more than one way to save a life—and more than one path to finding meaning in your own.

An excerpt from How to Save a Life

I have six minutes left to be kissed.

Three hundred seconds and counting, if I don’t want to end another year—let’s face it, an entire millennium—as the only seventeen-year-old in Brighton who has never snogged another human being.

Most of the girls in the sixth form have gone all the way. You can tell from the way they move: dancing wildly on the shingle beach, wearing heels that keep sinking into the gaps between the pebbles, unsteady and sexy and—

“Which do you think will implode first, the National Grid or air traffic control?” Tim says, passing me the can of Diamond White cider. When I raise it to my lips, all that’s left is apple froth.

I look up at the sky. “You probably shouldn’t be quite so excited about the idea of the world ending.”

He grins. “I can’t help it if I crave a bit of drama sometimes.”

You and me both.

“We don’t have long to wait to get our share of it.”

This time next December, I’ll be at Manchester Uni. And, impossible as it seems now, the odds are that by then I will have been kissed—and hopefully a lot more. But the prospect of finally losing my virginity isn’t even the most exciting thing about the year 2000 because in a year’s time, I’ll be training as a doctor. With a bit of luck, and the right questions on his physics exam paper, Tim will be doing the same.

“If Y2K doesn’t wipe us out . . .”—he looks at his Swatch—“five minutes from now. Makes me feel quite reckless, being on the brink of disaster.”

Reckless isn’t Tim’s style, but his eyes are bright: I can see the beach fires the hippies have lit reflected in them. Except it’s not just the flames. There’s something else in his face, an intensity . . .

He’s going to try to kiss me.

Maybe it wouldn’t be the absolute worst thing, if we did it in private. We’ve rehearsed slings and burn dressings on each other, so why not kissing? Both of us want to be prepared for when it really matters.

Except I don’t think he’s thinking of it as a rehearsal . . .

I move backward and break eye contact, staring resolutely over Tim’s shoulder to where Joel and his mates are having a knockabout on the lawns, lit by the Victorian lamps that line the prom. The frost has set the earth like concrete but the boys don’t seem to notice. They’re too busy trying to outrun Joel, even though they know they never will.

He moves twice as fast as the others, the football always at his feet. He was in the same class as me until we were sixteen. While Tim and I stayed on at school, Joel hit the big time, starting a professional football apprenticeship with our city club, the Dolphins. He’s one in a million. Everyone either wants to be him or be with him, me included. I think Tim might be the only person I know who doesn’t care about Joel one way or the other.

“. . . Perhaps we can blame the Pagans. You know, for deciding New Year should happen in December,” Tim says, embarking on a new lecture. I let the words float toward me, without taking them in. “Or I suppose it might have been the Romans.”

“Maybe.” I stay far enough away that he can’t reach. Everything has to be clear for Tim: he’s one of the smartest kids in the sixth form but sometimes he’s also the densest, and I can’t let him convince himself it’s a good idea to kiss me.

I imagine saying those words to Joel. Let myself believe for a moment that instead of laughing in my face, he might do as I ask.

On the lawns, Ant makes a clumsy attempt to tackle Joel but falls over his own big feet, and Joel vaults across his best friend’s legs to score again.

The ball flies over the two Gap sweatshirts laid as goalposts.

Six–nil to Joel. I’ve been counting.

“. . . but why didn’t they choose the summer solstice to mark a new year?” A speck of cider foam sits on Tim’s top lip, and I’m about to lean over and brush it away. Except . . . what if he thinks I’m flirting?

I want it to go back to how it’s been since we were seven: in and out of his garden and ours; every Tuesday, checking each other’s vital signs in the Scout Hall. I hate the new us: how he guffaws at my jokes when they’re not funny and gives me sideways looks as though he’s only just noticed that I’m female.

“Summer solstice would make for a better party. Sacrificing virgins, roasting pigs. Or the other way around.”

I get so twitchy now listening to his meandering monologues. I imagine walking away from him and heading onto the playing field, the icy blades of grass spiky through my tights.

In this other reality, I would easily score a goal.

Joel would embrace me in a victorious hug.

Maybe grace is too improbable. I’d settle for being surprising. For being noticed. At school, at home, here. Anywhere would do.

At the edge of my vision, Joel is running.

And then he’s not.

He doesn’t trip, or throw out an arm to right himself or break his fall. Instead, he drops, facedown, legs outstretched. The boy who fell to earth.

The others play on: Fat Matt does a double take when he gets possession of the ball and propels it toward the neglected goal.

I wait for Joel to get up. What’s he playing at? He’s not a joker the way Ant is, and I can’t believe he’s risked injury by falling so clumsily. In his last year at school, before he got his big break with the Dolphins, Joel was the only one of the popular kids never to smoke or drink. Even tonight he’s stuck to orange juice.

Ant pivots back, calling out, “Come on, Joel, you knob,” and when he reaches his friend, he nudges him with his big black shoe. Once. Twice. The third time is more of a kick.

Certainty strikes me like lightning. I drop the can of cider—Tim is still waffling on about the satanic origin of Christian rituals—and though I fully intended to walk toward Joel, my legs have other ideas.

Even as I run across the lawns, I’m cursing myself for being so obvious, but I can’t stop. After keeping my crush secret for nearly seven years I’m about to blow it.

Joel’s stillness makes me catch my breath. The other boys circle around him, catcalling. Ant frowns and as I step into the circle, our eyes meet. I brace myself for mockery—Ant has teased me on and off all through school—but instead, I glimpse panic.

“What’s wrong with him?” Ant asks.

“He’s messing about,” one of the lads says. I’m already kneeling down beside Joel, the grass sharp against my shins.

ABC. The first aider’s alphabet flashes through my mind, anchoring me. I’ve trained for this.

I lean in, close to Joel’s face. If he’s only blacked out, I should be able to feel the warmth of his breath. But apart from the sweet smell of orange juice, there is nothing.

Airway. I tilt his chin, feeling the slight prickle of stubble under my fingertips. I part his lips with my fingers, seeing him no longer as the boy I fancy but as a puzzle to be solved. Nothing seems to be blocking his throat.

He should be breathing.

Joel is heavy, a dead weight. But as we wrestle with him, Ant and me, I feel powerful. Joel’s on his side for a moment, before he flops down onto the grass with an obscene smack.

“Watch it!” Fat Matt says. “His legs are insured for ten grand each!”

They’re worth nothing if he’s dead.

Breathing. His chest isn’t moving. Nothing is moving. Time has slowed, but my thoughts are faster, clearer than they’ve ever been.

I glance up. “One of you needs to run to the call box and phone 999. Ask for an ambulance. Tell them he’s not breathing. Tell them to come fast.”

The five boys stand there, mouths gold-fishing, as though I’m talking a foreign language. “Paddy, you go.”

He shrugs and kicks at the earth, as though he’s unsure whether to obey me and risk having the piss taken for the next year.

“I’m serious. Go now.” I get back to work, pulling Joel’s long, lean arms to his sides. “Run. And, Matt—go and stand by the road. Try to flag down a police car.”

When they do what I say, we’re all equally gobsmacked.

Eva Carter is the author of How to Save a Life. Eva is a pseudonym for internationally bestselling nonfiction and rom-com writer Kate Harrison, who worked as a BBC reporter before becoming an author. She lives in Brighton on the English coast and loves Grey's Anatomy and walking her own scruffy terrier, who regularly volunteers as a therapy dog at the local hospital. 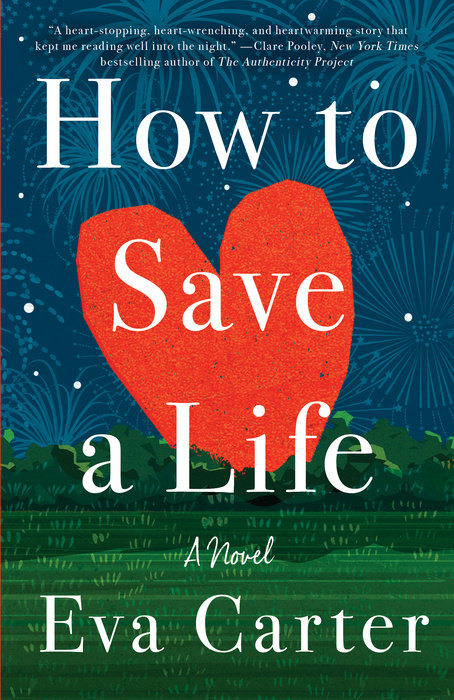