NAMED ONE OF THE BEST BOOKS OF THE YEAR BY PUBLISHERS WEEKLY • “A tender tribute to the healing powers of love and music . . . Readers will be wowed.”—Publishers Weekly (starred review)

Concert pianist Diana is finally ready to marry her longtime fiance, Arie; she’s even composing a beautiful love song for him, and finishes it while on tour. Before she can play it for him, though, tragedy strikes—and Diana is lost to Arie forever.

In Australia, the world has gone quiet for Arie and he lives his life accordingly, struggling to cope with his loss. In Scotland, a woman named Evie is taking stock of her life after the end of another lackluster almost-relationship. Years of wandering the globe and failing to publish her poetry have taken their toll, and she might finally be ready to find what her travels have never been able to give her: a real home. And through a quirk of fate or circumstance, Diana’s song is passed from musician to musician. By winding its way around the world, it just might bring these two lost souls together.

An excerpt from The Lost Love Song

Naturally, Arie and Diana bought a house with a bay window. It was a terrace house on a narrow street in the city’s historic quarter—­a neighborhood of sandstone cottages, artfully painted weatherboards, beautifully curated vintage stores, tiny street-­corner parks and perhaps the world’s highest per-­capita concentration of rustic bakery-­cafés.

It was Arie who found the house. After being outbid at two auctions, he went on the offensive, walking the streets on weekends and knocking on doors until at last, in Tavistock Row, he came upon a house with a bay window and an owner who didn’t laugh in his face when he asked if they were interested in selling.

The place retained every last bit of its shabby, unrenovated charm, and its location gave heft to the price, but Diana declared the bay window to be perfect. It was on the upper story, in a room with polished floorboards and double doors of frosted glass. Diana painted the walls herself, in a shade of beige that she chose almost entirely because it was called Grand Piano, and she angled the Steinway so that the bay window was at her back and the morning sun fell on the keys while she practiced.

In that house, on the seven-­year anniversary of the day Arie and Diana had met, a packed suitcase stood ready at the base of the stairs. In the morning, Diana was going on tour. First stop Singapore, then onward to the places whose winters made her think of snow domes: Paris and Salzburg, Prague and St. Petersburg. She would be overseas for almost a month, so—­as was customary on nights before she went away—­Richard and Lenka came over for dinner.

Although Diana and Arie had a snug little dining room, meals with Richard and Lenka never made it out of the kitchen. As Arie loaded toppings onto his homemade pizzas and slid his creations in and out of the oven, Richard gave unsolicited advice from the other side of the counter. Diana, in bare feet and a gingham dress, leaned against the kitchen sink with a half-­empty glass in hand, observing that Lenka, who was sitting on the kitchen’s only stool, had yet to take a sip of the wine Diana had poured for her half an hour earlier. Questions were also raised by the width of the purple swing top Lenka wore, and which Diana was fairly sure was brand-new.

Richard was the only person alive who was allowed to shorten Diana’s name in this way. That she let him get away with it was a concession to the importance of his friendship with Arie, which dated back to grade eight, when Richard had arrived from the UK, thickly bespectacled, with a mouthful of braces and an accent that was interpreted as insufferably stuck-­up. The braces and the accent were long gone, of course, and for some years the spectacles had been a good deal more Dolce & Gabbana than Coke bottle.

“Well, thanks for that charming sentiment, Richie-­poo.” Just because she tolerated him calling her “Di” didn’t mean she wasn’t going to fight back.

“He reckons he gets more work out of me when you’re not here,” Arie said, sprinkling a pizza with a liberal quantity of sliced jalapeños.

“I do,” Richard insisted. “The only time you log more hours than me is when Di’s overseas. I love it! Get to put my feet up for once.”

It was five years since Arie had quit his job at the Conservatorium to go into partnership with Richard in their own web development company. Bit by bit, as it had expanded and taken on more employees, Sonder Digital had colonized half the second floor of an old warehouse building in a semi-­industrial corner of the city. Giving each other shit was a crucial part of the bond between the two programmers, who often spent their leisure time talking shop in a language that was as impenetrable to Diana and Lenka as computer code itself.

“He is so full of it,” Lenka said in her lightly accented En­glish, although she didn’t need to. The truth was that both Richard and Arie worked ridiculously long hours and cared equally deeply about the success of their business. To keep the staff happy and fulfilled, they’d instituted daily pep talks, regular team bonding activities and a monthly Hack Day, as well as fitting the office out with a table tennis set-­up and a large fridge that was always generously stocked with kombucha.

Diana moved to Arie’s side and swiped a slice of mozzarella from one of his pizzas.

“Pest,” he said, although he kissed her hair.

“You’ll take care of him for me, won’t you?” Diana asked Lenka. “Make sure he doesn’t get worked into the ground while I’m gone.”

“Don’t worry. I’ll feed him and water him. Make sure he occasionally gets fresh air and sunlight,” Lenka said. “I promise.”

It wasn’t always a done deal that the partners of long-­standing best friends like Arie and Richard ended up being close friends themselves, but Diana and Lenka were among the lucky ones, despite being about as different as two women could be. Diana, as a rule, did not cook. Neither did she fold laundry, put out garbage, clean ovens or scrub bathrooms. Lenka, on the other hand, was unable to leave her house until she had wiped the sink, straightened her already straight doona cover and plumped her couch cushions. Diana knew it wasn’t fair to have been blessed with the ability to eat anything she wanted and remain stick thin, while Lenka had to restrict herself to a regimented diet in order to remain only as round as she already was.

Lenka was a psychologist, and Diana could imagine how reassuring her clients would find her forthright practicality. Lenka wasn’t the slightest bit musical; instead she played several sports, the rougher the better. Although, tonight Diana found herself wondering for how much longer this would be true. She watched Richard take a slug of his boutique beer and run a hand through his close-­cropped hair.

In the cramped kitchen, there was an explosion of hugging, squealing and delight, along with all the usual questions. How far along? (Almost twelve weeks.) Will you find out the sex? (Absolutely.) How much leave will you take? (As much as I can get away with.) Diana poured Lenka’s wine down the sink and fetched her a glass of sparkling mineral water.

“We were hoping,” Lenka said, “that you two would be the baby’s godparents.”

“Of course,” Arie said, glancing over at Diana. In the fleeting look that passed between them, Arie sensed some kind of uncertainty. But before he could study it, and before Richard or Lenka had noticed her reservation, Diana was once again bubbling over with happiness for her friends.

“Holy shit,” she said, clinking her glass against Lenka’s, Arie’s and Richard’s. “You guys are having a freaking baby!”

“Aren’t you two celebrating tonight as well?” Lenka asked, trying to deflect some of the attention.

“We are,” Diana said, slipping her arm around Arie’s waist. “Seven years together. Seven years.”

“Is there a particular reason for that?” Diana asked.

It was past eleven, and for the last quarter of an hour Arie had been sitting shirtless against the pillows in the summer warmth of their bedroom. He was aware of every move Diana made as she padded around the bedroom in a pale pink wisp of a nightgown, dithering with her hand luggage and setting the alarm.

“A reason for what?” Arie asked.

Although there was a book open on his lap, Diana was fairly sure that in all the time it had taken her to check and double-­check she had packed all her important things . . . passport, credit card, phone charger . . . he hadn’t turned a single page. She sat beside him on the bed.

“For that little thundercloud over your head.”

“There’s no thundercloud,” he said, without looking up from his page.

“Arie, it’s right there,” Diana said, poking at the air just above his head. “I can see it.”

Now he did look up. He closed his book, and sighed. “Do you really want to do this? Right now? Tonight?”

Diana was surprised by the note of irritation in his tone. “Well, it seems like you have something to say.” She set her jaw. “So, let’s hear it.”

MINNIE DARKE is the author of Star-Crossed and a librarian. She lives in Australia with her husband and their children. 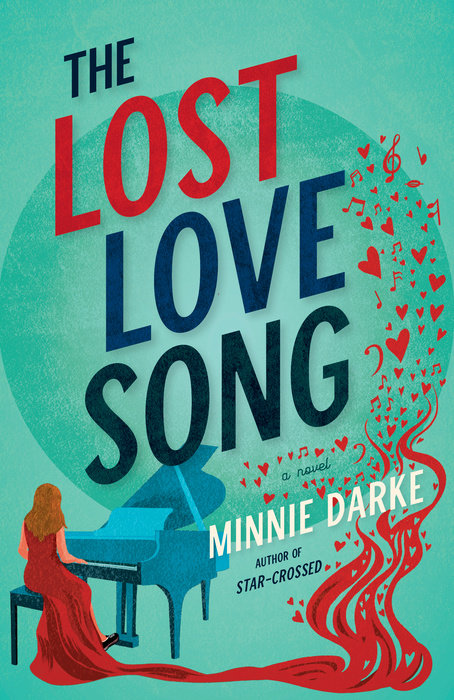