Thomas Jefferson on Equality, Faith, Freedom, Compromise, and the Art of Citizenship

Pulitzer Prize–winning historian Jon Meacham offers a collection of inspiring words about how to be a good citizen, from Thomas Jefferson and others, and reminds us why our country’s founding principles are still so important today.

Thomas Jefferson believed in the covenant between a government and its citizens, in both the government’s responsibilities to its people and also the people’s responsibility to the republic. In this illuminating book, a project of the Thomas Jefferson Foundation at Monticello, the #1 New York Times bestselling author Jon Meacham presents selections from Jefferson’s writing on the subject, with an afterword by Pulitzer Prize–winning historian Annette Gordon-Reed and comments on Jefferson’s ideas from others, including Colin Powell, Madeleine Albright, Frederick Douglass, Carl Sagan, and American presidents.

This curated collection revitalizes how to see an individual’s role in the world, as it explores such Jeffersonian concepts as religious freedom, the importance of a free press, public education, participation in government, and others.

Meacham writes, “In an hour of twenty-first-century division and partisanship, of declining trust in institutions and of widespread skepticism about the long-term viability of the American experiment, it is instructive to return to first principles. Not, to be sure, as an exercise in nostalgia or as a flight from the reality of our own time, but as an honest effort to see, as Jefferson wrote, what history may be able to tell us about the present and the future.”

An excerpt from In the Hands of the People

The Ongoing Quest for Equality

Jefferson offered us a bold vision when he declared that all men are created equal. We know that neither Jefferson, the Founders, nor we fully live up to that principle, but the standard that Jefferson articulated was inspirational and aspirational. It was a hope and a promise. It has been used for centuries as a touchstone for people seeking freedom and demanding their own voice in the political process. As Abraham Lincoln said, Jefferson’s words stand as “a rebuke and a stumbling-block to the very harbingers of reappearing tyranny.” Both the principle of human equality and the continuing struggle for it lie at the foundation of the American republic, and the finest hours in our history have been marked by an expansion of those people included in the Jeffersonian assertion of the summer of 1776.

While Jefferson profited from slavery, America’s tragic original sin, and failed to promote the rights of all of the members of the American community, he nonetheless understood that a multi-ethnic nation needed to protect the rights of all of its citizens and actively engage them in its governance. The fundamental principle was adaptable for other people and other times. Human progress would expand its reach. African Americans, women, Native Americans, the LGBTQ communities, and others have, through their own great efforts, put living blood into the heart of the Jeffersonian principle. Jefferson’s sight was often narrow—limited to white men—but his vision was broad and powerful, defining much of what is great about America. It has inspired people around the globe and across time, and continues to do so.

We hold these truths to be self-evident, that all men are created equal, that they are endowed by their Creator with certain unalienable Rights, that among these are Life, Liberty and the pursuit of Happiness. That to secure these rights, Governments are instituted among Men, deriving their just powers from the consent of the governed. . . .

The equal rights of man and the happiness of every individual are now acknowledged to be the only legitimate objects of government. Modern times have the signal advantage too of having discovered the only device by which these rights can be secured, to wit, government by the people acting, not in person, but by representatives, chosen by themselves. . . .

All too will bear in mind this sacred principle, that though the will of the majority is in all cases to prevail, that will, to be rightful, must be reasonable; that the minority possess their equal rights, which equal laws must protect, and to violate would be oppression.

May it [the Declaration of Independence] be to the world what I believe it will be, . . . the signal of arousing men to burst the chains, under which monkish ignorance and superstition had persuaded them to bind themselves, and to assume the blessings and security of self-government. . . . All eyes are opened, or opening to the rights of man. The general spread of the light of science has already laid open to every view the palpable truth that the mass of mankind has not been born, with saddles on their backs, nor a favored few booted and spurred, ready to ride them legitimately, by the grace of god. These are grounds of hope for others.

For let it be agreed that a government is republican in proportion as every member composing it has his equal voice in the direction of its concerns. . . . The true foundation of republican government is the equal right of every citizen in his person, and property, and in their management.

I will not believe our labors are lost. . . . The art of printing alone and the vast dissemination of books will maintain the mind where it is, . . . and even should the cloud of barbarism and despotism again obscure the science and liberties of Europe, this country remains to preserve and restore light and liberty to them. In short, the flames kindled on the 4th of July 1776 have spread over too much of the globe to be extinguished by the feeble engines of despotism. On the contrary they will consume these engines, and all who work them.

We hold these truths to be self-evident, that all men are created equal, that they are endowed by their creator with certain inalienable rights, that among these are life, liberty and the pursuit of happiness.

And near the beginning of the preamble [of the Declaration] are two simple, soaring sentences that are known to every American. Two sentences that are the very breath of our national life. Two sentences that have come across 221 years with not the slightest loss of power or significance. Two sentences that inspire the world as if they had been written yesterday. We hold these truths to be self-evident, they need no proof or explanation. They are obvious. And they are truths, not assumptions or hypothesis. “All men are created equal,” five words, twenty-one letters, a revolutionary thought for the time. Five words that still throw the light of democracy into the darkest corners of tyranny and oppression.

Allow me to say, in conclusion, notwithstanding the dark picture I have this day presented, of the state of the nation, I do not despair of this country. There are forces in operation which must inevitably work the downfall of slavery. “The arm of the Lord is not shortened,” and the doom of slavery is certain. I, therefore, leave off where I began, with hope. While drawing encouragement from “the Declaration of Independence,” the great principles it contains, and the genius of American Institutions, my spirit is also cheered by the obvious tendencies of the age.

It was, Virginia, your own Thomas Jefferson that taught me that all men are created equal.

We hold these truths to be self-evident; that all men and women are created equal; that they are endowed by their Creator with certain inalienable rights; that among these are life, liberty, and the pursuit of happiness. . . .

The Declaration of Independence proclaimed to a world, organized politically and spiritually around the concept of the inequality of man, that the dignity of human personality was inherent in man as a living being. The Emancipation Proclamation was the offspring of the Declaration of Independence. It was a constructive use of the force of law to uproot a social order which sought to separate liberty from a segment of humanity.

The colored woman feels that woman’s cause is one and universal; and that not till the image of God, whether in parian or ebony, is sacred and inviolable; not till race, color, sex, and condition are seen as the accidents, and not the substance of life; not till the universal title of humanity to life, liberty, and the pursuit of happiness is conceded to be inalienable to all; not till then is woman’s lesson taught and woman’s cause won—not the white woman’s, nor the black woman’s, not the red woman’s, but the cause of every man and of every woman who has writhed silently under a mighty wrong.

Anna Julia Cooper, African American scholar and educator, “Women’s Cause Is One and Universal,” 1893

On the Statue of Liberty it says: “Give me your tired, your poor, your huddled masses yearning to be free.” . . . In the Declaration of Independence, it is written: “All men are created equal and they are endowed with certain inalienable rights.” . . . And in our National Anthem, it says: “Oh, say does that Star-Spangled Banner yet wave over the land of the free.” For Mr. Briggs and Mrs. Bryant and all the bigots out there: That’s what America is. No matter how hard you try, you cannot erase those words from the Declaration of Independence. No matter how hard you try, you cannot chip those words off the base of the Statue of Liberty and no matter how hard you try, you cannot sing “The Star-Spangled Banner” without those words. That’s what America is. Love it or leave it.

Thomas Jefferson on Equality, Faith, Freedom, Compromise, and the Art of Citizenship 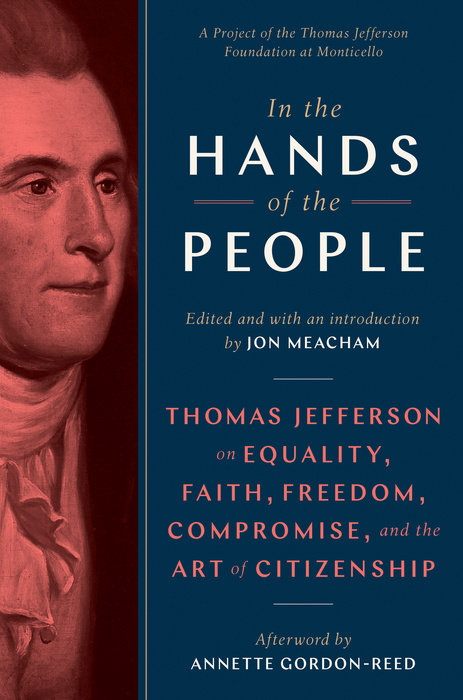